My DCC implementation is based on my research, requirements and experience.

You might not need the same things I did/do, so you should start by listing YOUR requirements. My process is documented below starting from my first setup.

Listing up the requirements:

I knew right up front I would need a lot of amperage. I suggest you consider this first, as it makes it easier to eliminate systems that just won't put out enough current.

I measured the current draw on USAT F3 units, and I'm using about 1.7 amps per USAT F3 unit under load on a grade. I wanted to to handle a maximum of 5 or 6 units, so this was a  challenge. (Later I found that 2 locos pulling the same train as 1 loco draw about the same current. Luckily I estimated about 10 amps, which saved me, since I have a 3.4% grade and I later found one train pulled almost 10 amps itself).

I also found out that lighted passenger cars can draw close to an amp each.

Voltage: (volts on the rails):

Many people do not realize that voltage can also be very important in G scale.

I did some testing, and found that I lost 3 volts in the booster, i.e. 24 volts DC into the booster yielded 21 to the track, under no load conditions.

The DCC decoders can also lose about 2-3 volts between the track input and the motor.

What does that mean to you? I experimented with the effect of voltage on the maximum speed on the locos. Many power supplies for DCC are a simple AC transformer, or DC supply, unregulated.

I was also seeing a situation that a "24 volt" transformer would yield 20 volts out under load.

So there were real situations where the locomotive motors only "got" between 15 and 18 volts.

First thing to realize about DC motors: There is NOT a linear relationship between motor voltage and motor speed. Virtually all the "top speed" in a motor comes from the last few volts applied.

So the difference between 15, 18, and 20 volts to a loco makes a BIG difference in the top speed.

Now, the real example: I found that my Aristo E8 locos would only run 62-65 mph at 20 volts on the rails, but would hit close to 90 with 23 volts on the rails. Absorb this information. If you are running narrow gauge and you never go over 25 smph, virtually any voltage will do. If you run standard gauge like I do, you need the full 24 volts on the rails. This means you need to pay attention to your power system if you need anything near 70 miles per hour from this loco.

OK, so I know (now) I need a high amperage booster, and also to get as close to 20 volts into the motors.

I purchased the 10 amp NCE system. It was the only thing at the time with enough amperage.

Originally I bought a big 10 amp transformer from Tony's Train Exchange. I found a perfect box to put it in, from LMB, a #142, 4x6x5" high. But I found the voltage sagged quite a lot under load. Also, since I'm running passenger train also, I needed all the voltage I can get. (A transformer alone always has it's output voltage sag under load).

The result was that the voltage to the rails often sagged to 17 volts. No wonder that people say their locos run slow!

How to make it better:

When I started the "current wisdom" was just use a big transformer, but clearly I need to run the system as close to 24 volts on the track as possible irrespective of the load. Therefore a regulated power supply is needed. When I first did this, there were a lot of people who said this was not necessary. Today, you will find those same people tell you that you MUST use a regulated power supply. 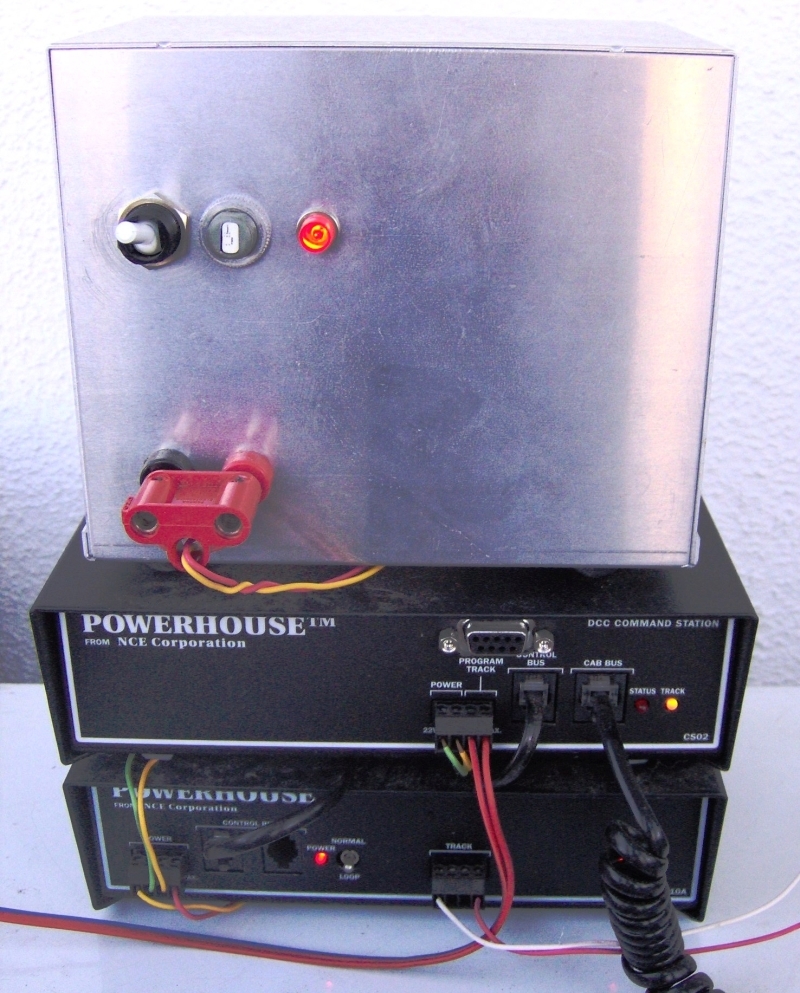 The NCE booster has a settable output, but normally it maxes out at about 20.1 volts. I have a calibrated speedometer car, and my USAT F units only went about 67 mph at this track voltage. I checked with NCE since they said the unit could go to 24 volts. I sent it in, they modified it to give me the max voltage. So adding 3 volts to compensate for the loss through the booster, I needed 27 volts in. (Unfortunately, they no longer do this mod for most people).

So, I purchased a regulated 11 amp, 27 volt supply, it's on the bottom of the picture below. The passenger train can now hit 92 scale miles per hour. There are more reasons for having this top speed, it allows you to speed match all your locos (you usually match to the lowest tops speed loco).

Since I wanted the system outside and as close to the feed points, I put the equipment all together in a weatherproof enclosure.

Components from bottom up: 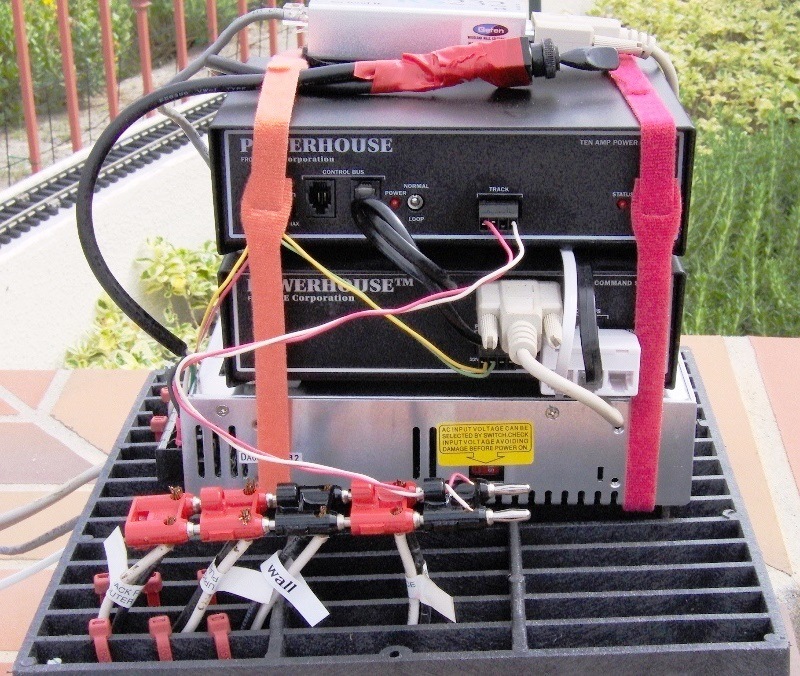 You can see the large black cable that goes to a toggle switch on top. This allows me to cut power easily, as the Meanwell has no internal power switch.

The power supply output comes from the left side, and it feeds the booster on top of the "stack" via the red and yellow wires.

The booster is fed the regulated DC from the power supply via the red and yellow wires. This is the path of the most current, so make that the shortest leads. The input connector is covered by the orange velcro straps. This is by design to keep that connector all the way engaged. A weak point in the NCE design is that while the connector is a good design, the way the circuit board is mounted inside, the connector cannot seat as fully as desired, so a common issue is burning of this connector when it's not all the way "home". If I still had this unit, I would cut the front panel out to let the connector get further engaged. So the best I could do is use the straps to keep it in place.

This connector has 4 pins, two each are paralleled, so you can daisy chain other units that need the DC input voltage, and indeed you see a yellow and green wire "leaving" to go and power the command station.

Last, you can see the output to the track via the red and white wires, and you can see this go down to the dual banana plugs which each connect to a power district. Note these connectors stack and unstack easily, so for DC operation, I merely unplug the power districts I want from this DCC power and connect them to a DC supply. Easy, fast, and capable of handling high current.

The command station receives it's operating power via the yellow and green wires.

You can also see the data connection to the booster via the flat black cable.

The large tan connector is the serial port on the command station, which allows remote control, like JMRI. It runs to the silver Gefen box on top, and you can see gray cable exiting to the left end. This is a serial port extender, which connects to a unit inside the home. (ordinary serial ports cannot go long distances).

Finally you see a large white box with two cables plugged in, an 3rd port free. This is the cab bus, and different things can be plugged in, I have a wire for a hardwired cab, and another wire leads to the wireless base stations for the wireless cabs.

The enclosure is a 12" x 12" irrigation "catch basin", but inverted. So, normally you would have a drain grate on top, but now the drain grate is the base. Underneath, I have added some finer screen mesh to keep critters out.

The top is the "catch basin" "box". It usually sits in the ground and connects drain pipes together. You glue the plugs in both sides. Put a handle on it and it makes a perfect waterproof cover:

Here's the stack with a DCC Specialties autoreverser added, just use the banana jacks to add it into the circuit, easy, fast. This autoreverser will eventually be placed right at the wye that is the entry to the switchyard.

I have found two things in the power department I need: an honest 24 volts to the rails and a bit more than 10 amps maximum.

Up until recently, other than a very expensive booster from Germany, there was no solution much more than 10 amps:  http://www.heller-modellbahn.de/Dietz.htm

Then Zimo started advertising the MX10 system, that was to have a 12 amp and an 8 amp output that could be combined for 20 amps.

After years of advertising, they finally made it available. I bought one in late 2015.

It simplified my wiring, since the command station and booster are combined. Also it has an Ethernet connection, so I won't need the special RS-232 extender.

Power for the Zimo

Again, I wound up with a Meanwell, although this model does not need a fan, a bit more expensive, but a sealed unit outdoors is a good idea.

This is a large outdoor electrical box, and I added a pvc tube for the antenna. I use these for other electronics outside. There is a rubber gasket in the lid. It's a bit bigger than I need, but inexpensive and secure. Unfortunately, it's a pain to open and close with it's 8 screws. Also the boxes tend to crack at the corners. Since it is a pain to open, I also fed the cab bus wire (for hardwring throttles) and the programming track wire out of the box, exposing them to weather.

Also, with the firmware updates, and wanting to change some settings on the command station I looked for something I could open more quickly and easily.

I found this case at Fry's Electronics and it was on sale for $67 since it had custom foam inserts for a discontinued gopro camera.

Note there is my plastic fitting added to allow wires to get in and not water. This is a standard pvc "service entrance" fitting, used for houses. There is a cover that pops over this. In the top, there are several bosses with holes to be able to bolt something in. I added 4 velcro straps So now, the MX10 just straps in, and can be removed easily. So here is everything in the box:

Also in the box is a wireless on/off switch (the black box with the yellow plug inserted.

Since this opens easily and quickly, I can leave the cab bus wire and the programming wire inside, out of the elements too.

I was thinking to cut a hole in the top of the box and make a small extension tube to get the antenna horizontal, but then, since Zigbee is 2.4 GHz, why not try an external antenna and then I can also place it a better situation: Cheap from Amazon, although you should buy the name brand shown, there are a lot of cheap imitations and a number of posts where RF technicians have measured the "clones" and they are no better than a dummy load (not an antenna). I have the Alfa ARS-N19 antenna, 2.4 GHz, 9dBi. I got a 3 meter extension cable. Remember these connectors are Reverse SMA, or SMA-RP