This page is not to give Aristo a hard time, but the quality issues with their wheels, and the fact that the underlying wheel is steel and will rust and pit once the plating is gone was the motivation, as well as the poor wheel contours, excessively thick flange that interfered with proper gauging, toy-like tread taper, etc.

We started looking at alternative wheels. I had looked before and ordered wheels 6 months earlier, and received nothing. While there are some after market manufacturers, to get the specialized design to fit the tapered axles on Aristo locos, no one had anything. The only "wheel company" who even advertised replacement wheels for Aristo is NWSL, but repeated calls gave no satisfaction, and actually a different story each time, but no wheels.

Aristo in the form of Lewis Polk talked about stainless steel wheels several years ago, then said they would make them, then nothing happened. Recently, a discussion about the poor plating on Aristo locos on the MLS forum brought the Aristo forum thread back to life, there was a brief flurry of excitement, and Lewis again promised to make the wheels, but then after stating the price would be "sky high", all Aristo information ceased.

Ted and I reasoned that since the Aristo wheels seem to only be available from Aristo, and at $10 each, something needed to be done.

Ted has a mechanic friend and while discussing this, was directed to the owner of a machine shop that does custom and high precision work.

I had been investigating wheel and track standards on my own, and have been conversing with Sam Evans and Dave Goodsen, both very knowledgeable.  Together Ted and I worked up a set of "reasonable" standards and goals, based on what has worked for others, and the NMRA standards (with a little more rational take on tolerances), and G1MRA standards, which have been working for modelers for years.

I'll add more details later, we are in the final stages of testing.

Suffice it to say, there are several improvements in the design: 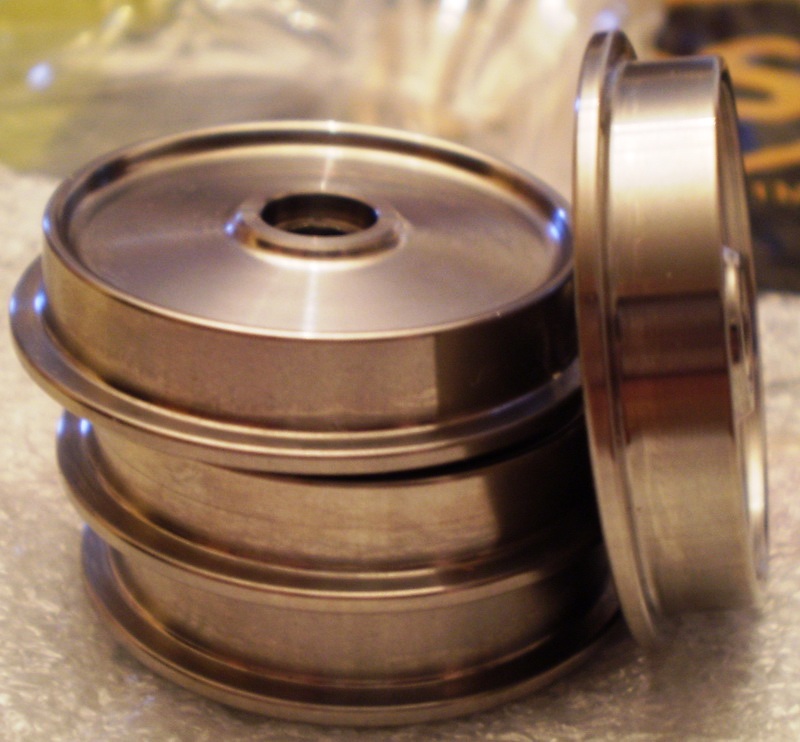 In the course of our research and design, we found that the Aristo back to back spacing was excessively "tight" (narrow), but certain ones were much narrower, as much as 0.03"...  with specifications that have tolerances of 12 thousandths, a variation from the factory of 30 thousandths  meant our wheels would not work.

Upon investigation and measurement of the Aristo "prime mover" motor blocks it was discovered that the earliest motor blocks (with patent pending) were significantly different from the current production.

The 2 metal half axles mount to the worm gear, so the length of each half axle and the thickness of the gear all "count".

The older style gear boxes have generally more dimensional variation within their group, .003-.005 as opposed to .001-.002 for the newer ones.

The biggest difference however is the stub axle itself.  The earlier ones are were manufactured differently and are about .015 shorter , which accounts for .030 of the difference, the plastic center gear is also about .005 shorter, for a total of about .035, when added to tolerance build up, this could account for spacing differences of between .025-.045 narrower.

This meant making two different version of wheels, with different "depths" of the tapered hole for the axle. Frustrating, but this explained the huge variations in some motor blocks.

Two of the pictures show use of the Aristo Go / No Go Wheel Gauge for
back to back wheels.

The worst case original Aristo wheels Back to Back measured a super
tight 1.518 inch for axle no. 4 (the axle near fuel tank on rear truck).
When replacing Aristo wheels with Datum Precision (DP) wheels and
looking for what minimum tolerance differences I could use, I selected
among several that would give the widest spread when installed on the
rear truck.

The following are my measurements in inches for Aristo original wheels
and then installed Datum Precision wheels of type with pair at +0.035
made for increased back to back spacing:

I suspect stub axle run out and taper to been inconsistent on this SD45
(poor quality) and cause less - or greater back to back replacement
wheel spread than anticipated.
Some of the pictures show the dull finish on the axles with wheels removed.

Testing on RJ's and Joe's locos:

1.561 back to back on SS Aristo wheels on the 3 axle demonstrator motor block at the Ontario show, 2010