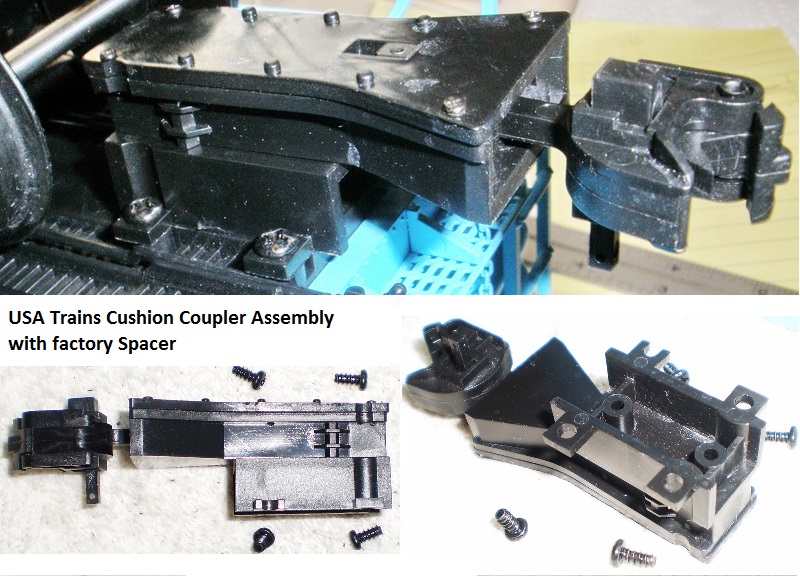 However, since the locos and rolling stock I have are equipped with body mount Kadees with trip pins that can be uncoupled using a Kadee Track Magnet, I decided to be consistent and body mounted Kadee 906 centerset couplers were used on the USA Trains 60 foot cars, too. 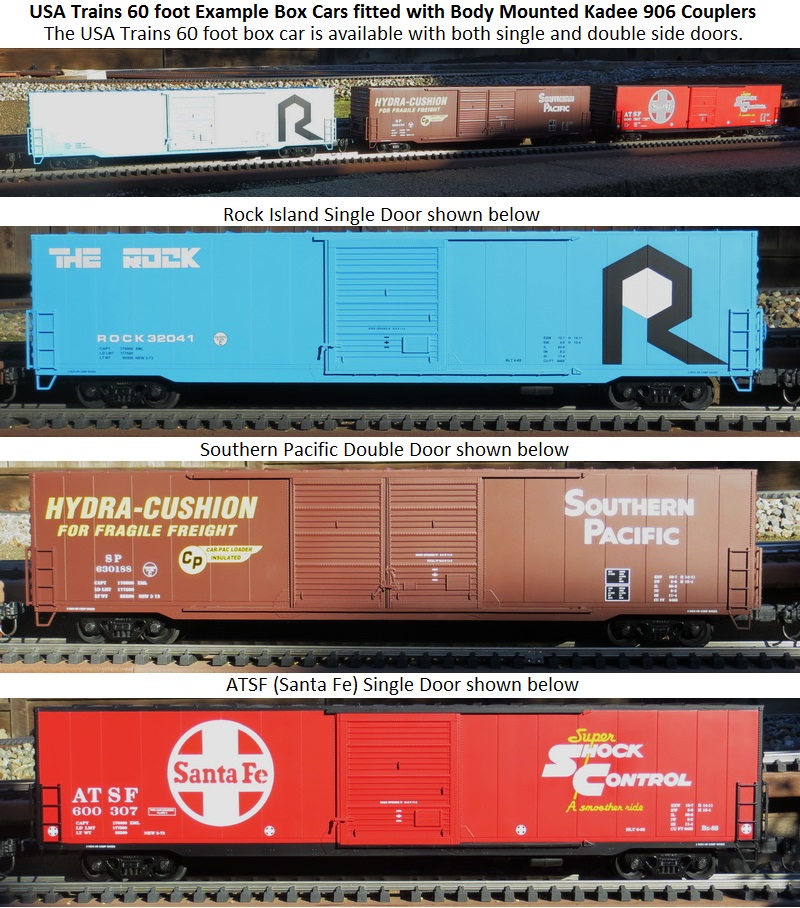 Shown below is a USA Trains Southern Pacific 60 foot boxcar fitted with the Kadee 906 centerset coupler with its draft gear box projecting from the end bulkhead that emulates the prototype. 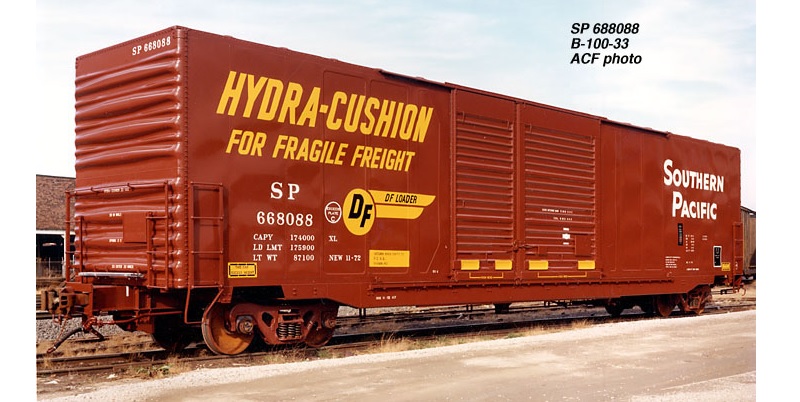 As Received Cars in Boxes

The USAT 60 foot boxcar is offered in many road names in both single door and double versions. 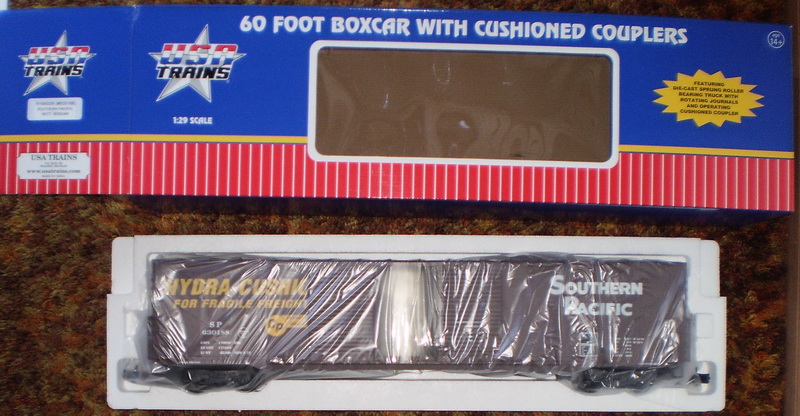 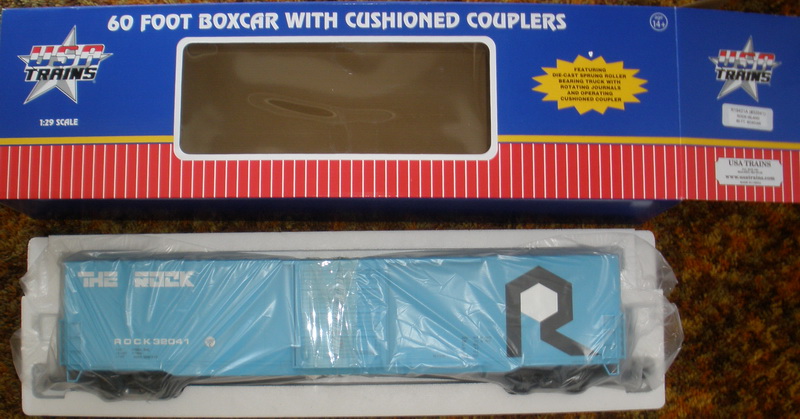 Out of the box, these cars are modeled with a USA Trains cleverly designed coupler assembly that emulates the cushion effect when coupling a loco or another car to it, or it to another car.  The USA Trains instruction sheet shown below that comes with the car describes how the factory equipped spacer can be removed so that the coupler assembly can be directly mounted to the car floor. 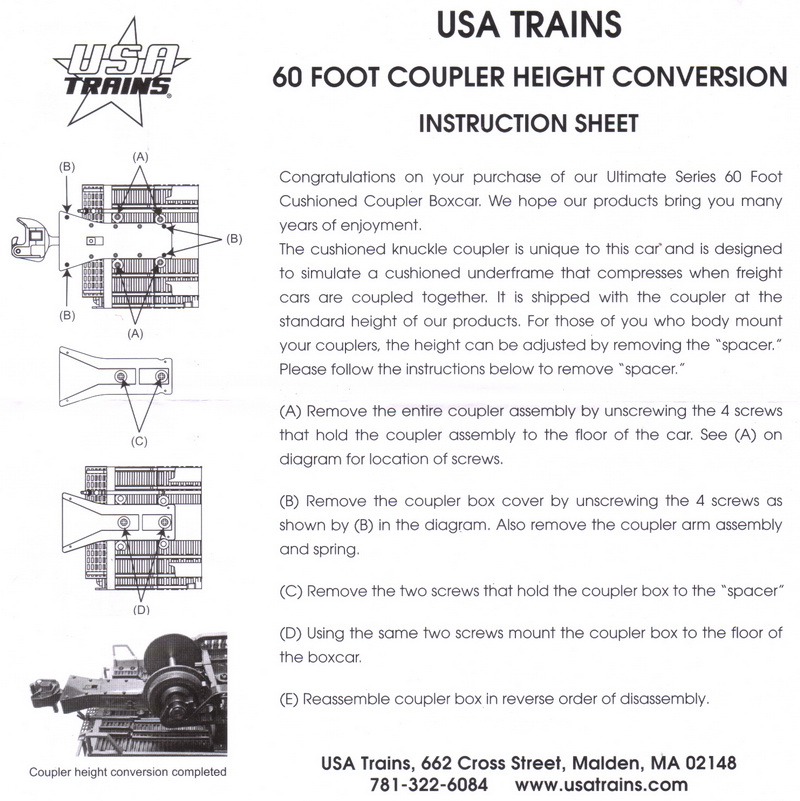 The factory knuckle coupler assembly comes standard with it mounted on a spacer to conform with USA Trains standard height low to the railhead equipment; however, the spacer can be eliminated with the coupler assembly directly mounted to the car floor as illustrated below.

Ensure the coupler with coil spring is reinstalled in the box as shown below before fastening the lid. Note: The picture above shows the box with factory spacer, but the spacer is to be removed when directly mounting box to the car floor as previously described.  The box must be mounted to the floor before reinstalling the coupler with spring in the box and fastening the lid at its corners with the 4 tiny Phillips head screws.

With the factory installed spacer removed and the USAT coupler assembly directly fastened to the car's floor pad, the coupler, also, lines up pretty well with the Aristo GP 40 having a Kadee 907 type centerset coupler - shown at the right. 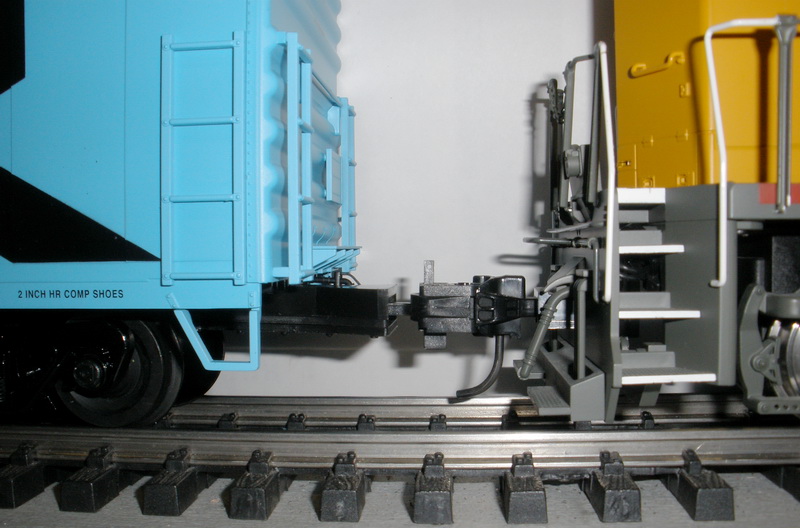 There is an observable unbecoming aspect being the downward tilt to the coupler assembly - which is the same with or without spacer as illustrated below! 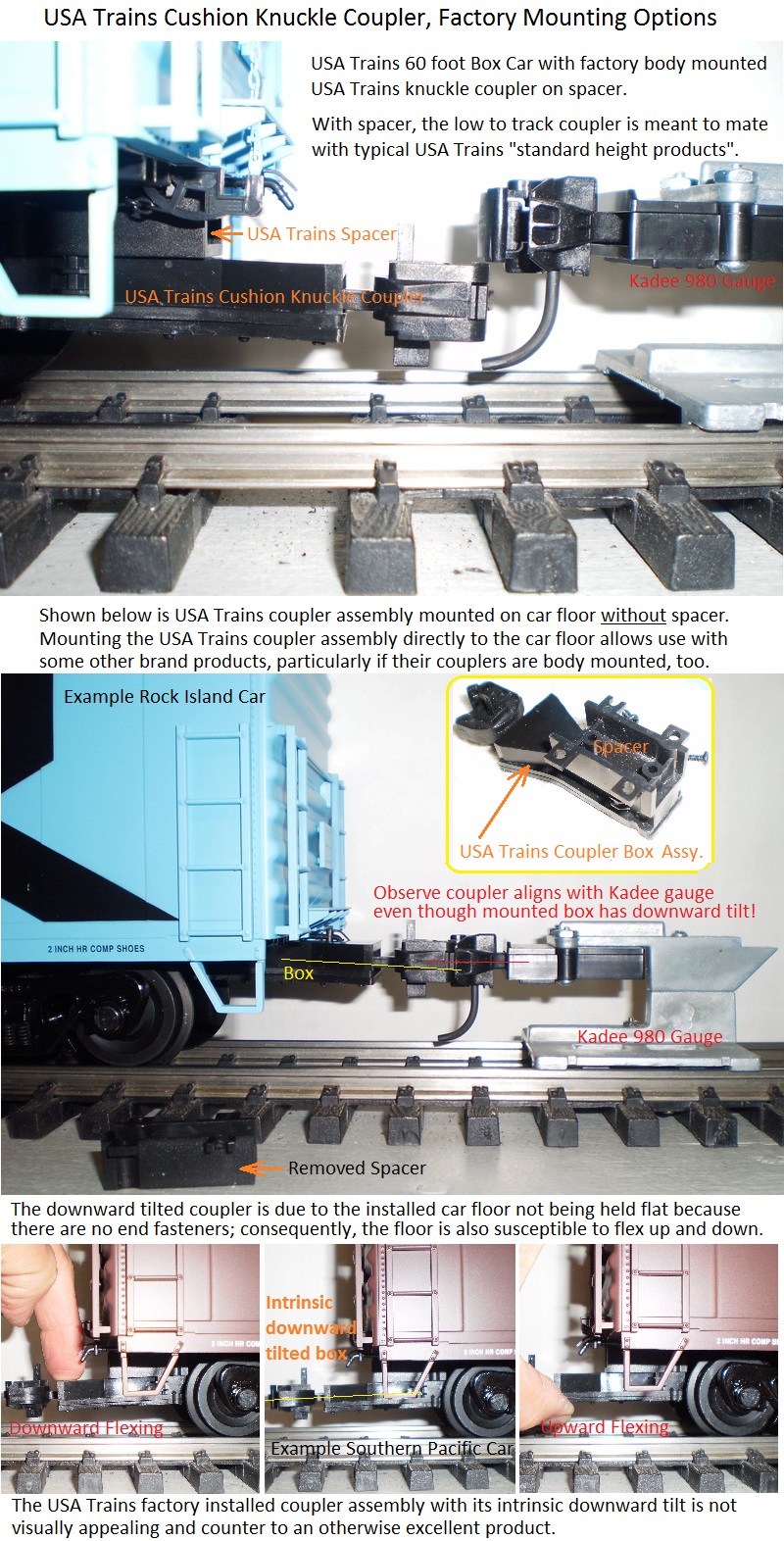 This is a bit unsightly but works OK when the car is in a train under tension as forces will tend to pull the coupler upward somewhat (straighter); however, in compression forces imparted could push the coupler downward - though, the cushioned coupler should help minimize this unless it's completely bottomed out.

As to performance when mated to Kadee couplers, the box car's coupler does compress when being coupled with a loco or another car, and it can often - but not always - respond to a mated Kadee coupler trip pin for uncoupling when over a Kadee track magnet.  However, if you have trains equipped with Kadee couplers and want more repeatable operation when switching cars around, it's still highly desirable to convert the car to accept Kadee couplers.  In doing so, the ugly downward coupler tilt is also corrected - described later.

With opposite effect to that of the USA Trains cushion spring coupler, the Kadee 906 with its internal spring does offer a "shock" effect for sudden slack action tension loads as can be seen below. 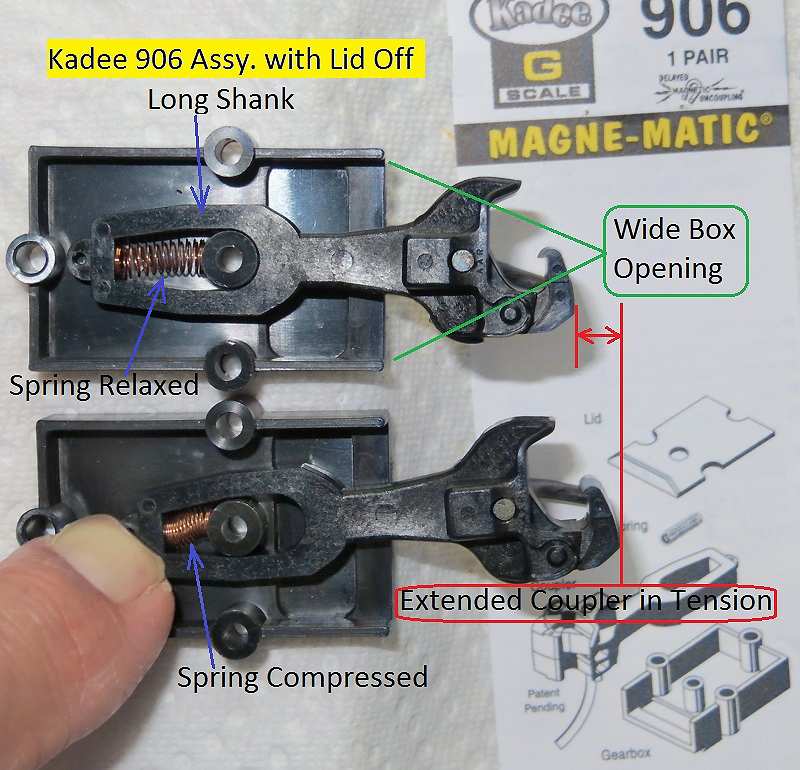 By installing Kadee 906 couplers, the ugly downward box tilt can, also, be corrected as illustrated below. 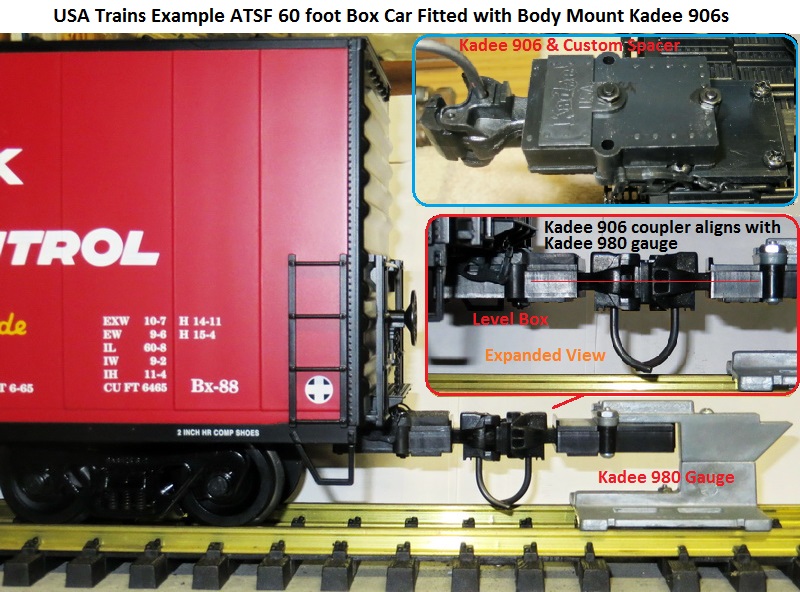 Typically, prototype cushioned cars have a very pronounced & projected draft gear box, so this artifact is replicated like that done with the USA Trains factory coupler. 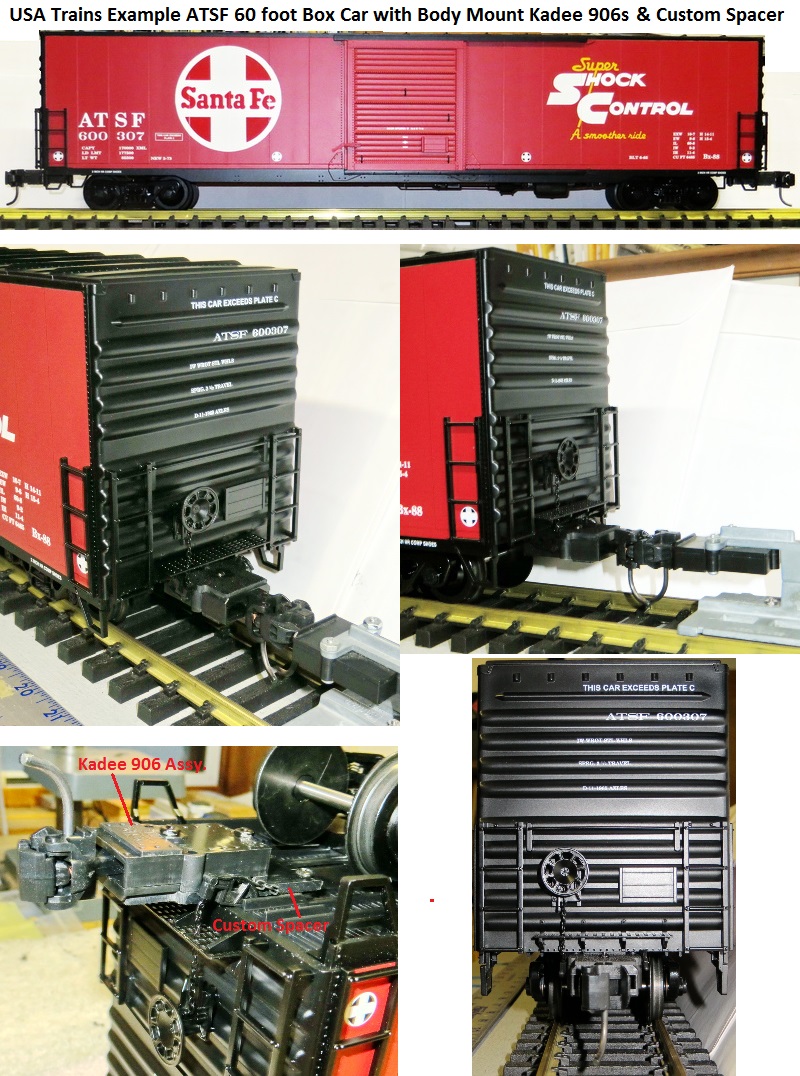 A custom spacer made from ABS plastic is needed to mount the Kadee 906 for proper coupler height from the railhead and to emulate the prototype draft gear box projection from the end of the car.

ABS plastic material 1/8 inch thick can be obtained from TAP Plastics cut in a 1.1 inch wide strip.  The material typically is textured on one side and a smooth on the other side.  The strip can be cut into pieces for fabricating several spacers used for mounting a Kadee 906 coupler box assembly.
The dimensions are included in the illustration below. 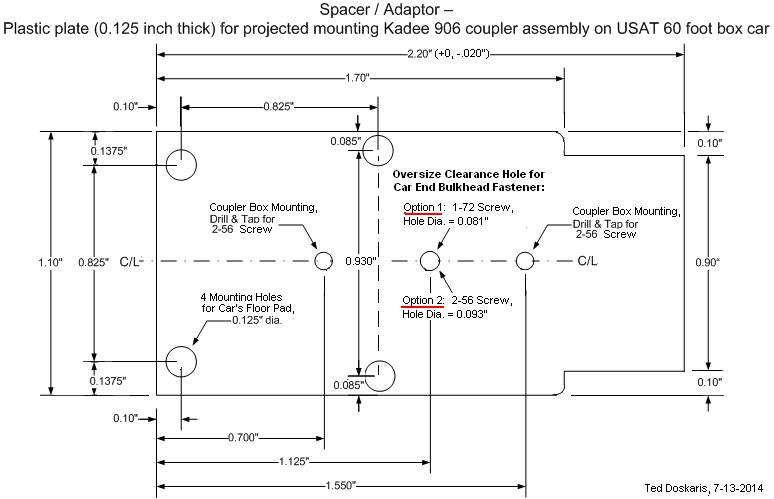 The Kadee box lid, also, needs to be modified so the box can be mounted unobstructed on the spacer (clearance for screw heads).  The dimensions are included in the illustration below. The illustration below describes what's entailed to install the Kadee 906 and custom spacer.

Note additional details pertaining to installation are illustrated below.

Note:  I found the USAT die cast metal trucks that came with the 60 foot box cars had a shim between the bolster and sideframes.  The same trucks are used on USAT Modern Tank Car; however, those trucks did not have the shims. 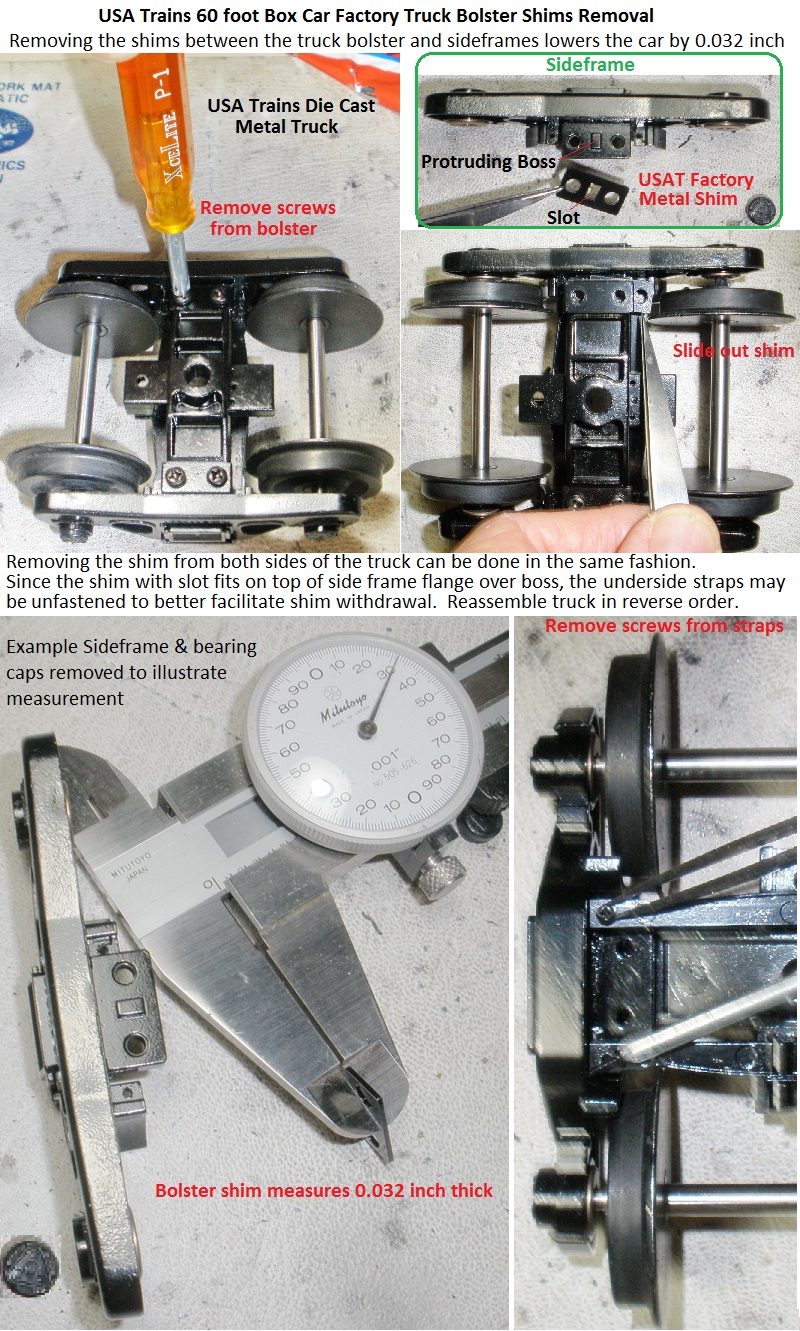 Verify the installed Kadee 906 coupler aligns with the Kadee 980 gauge - illustrated in the example below. 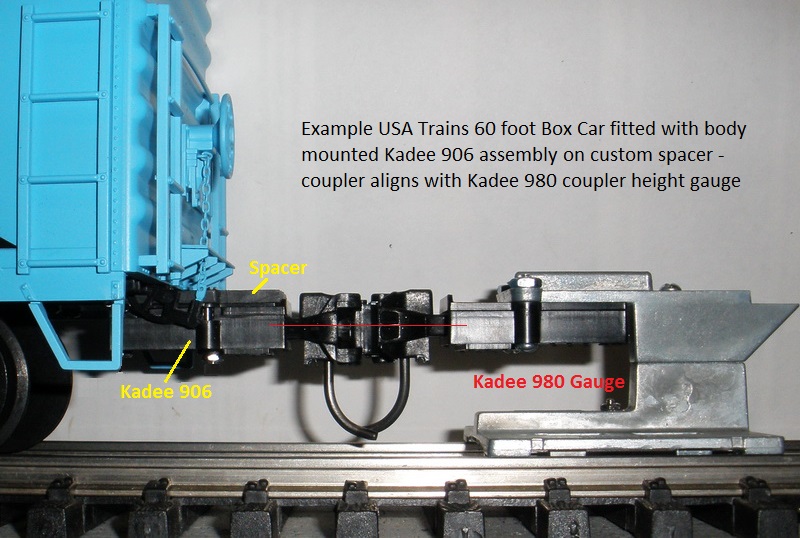 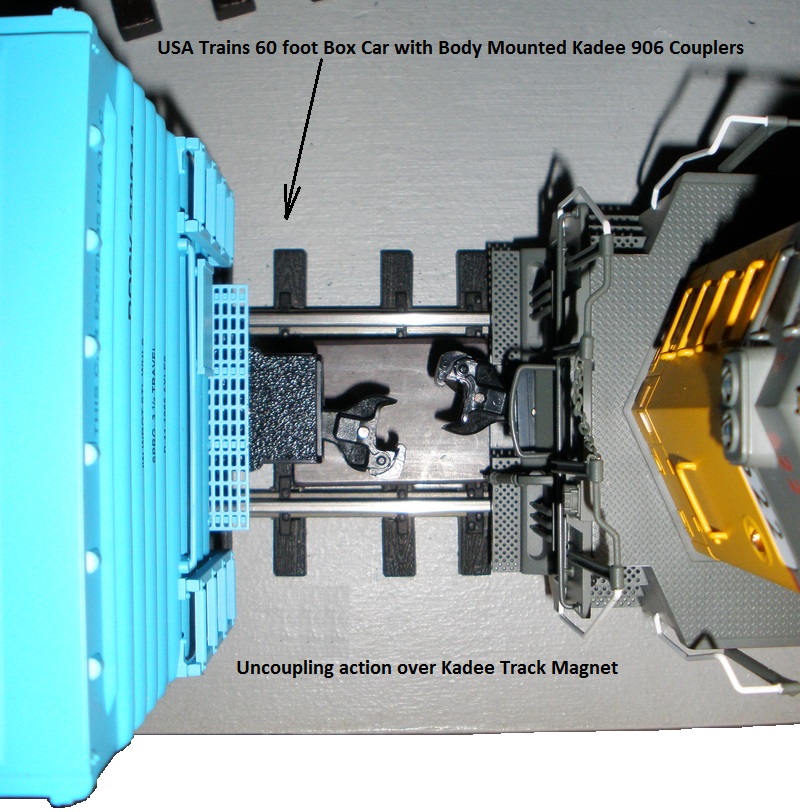 Illustrated below are USAT 60 foot box cars in a short train on 8 foot diameter track circle. 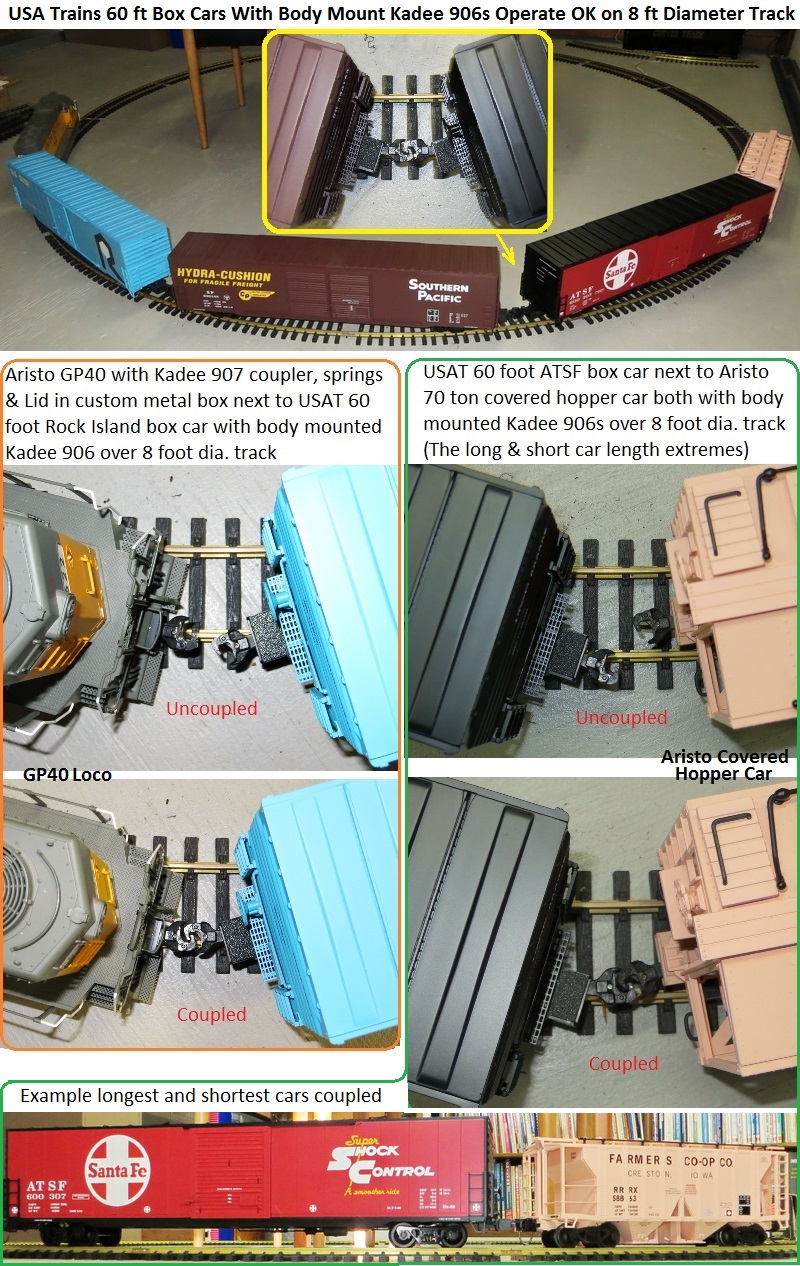 Illustrated below is the USAT 60 foot box car in a long train on the underhouse layout 10 foot diameter loop back. 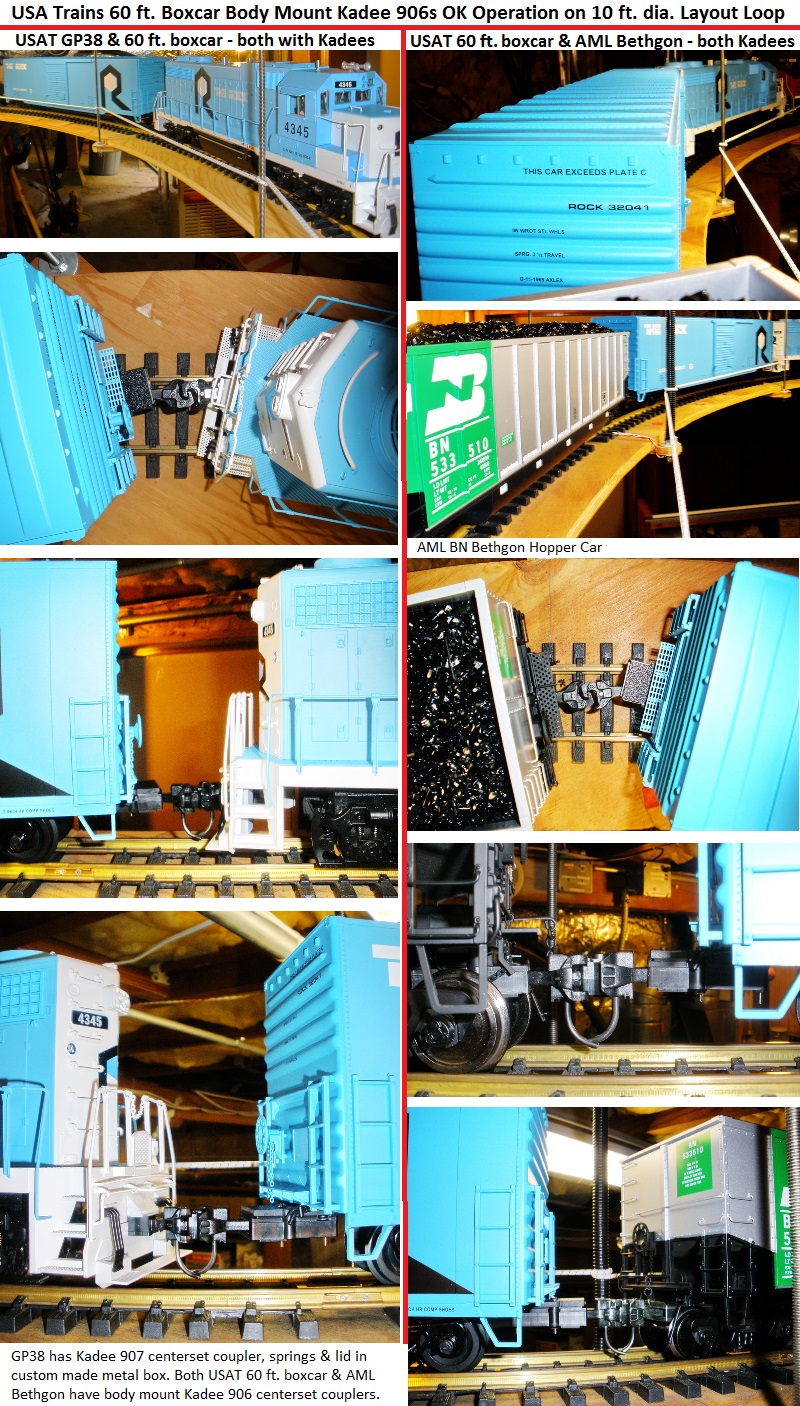