The first thing I noticed about the Hydra-Cushion car as configured by USAT are its Bettendorf type trucks having friction bearing journals. Being somewhat familiar with SP this seemed inappropriate given the era of the car, so having checked in several books, these type SP cars were equipped with the newer roller bearing type trucks. Another thing also apparent is that the Hydra-Cushion cars have projecting draft gear / couplers.

In this regard, the following book is of particular interest:
Southern Pacific Color Guide to Freight and Passenger Equipment, Volume 2
By James Kinkaid
Published by Morning Sun Books, Inc.
ISBN 1-58248-155-5
It appears that the USAT car of road number 672021 was among many cars renumbered.
Closely resembling the USAT car is shown at the middle of page 19. It is a Hydra-Cushion car of road number 234090 having roller bearing type trucks with 3 outwardly visible coil springs and a prominently projecting coupler draft gear box. At the bottom of page 35 is Hydra-Cushion car of road number 663053 that looks like the car on page 19 but with a slightly different livery - likely owing to the renumbering.

Also, a picture of a similar car to that of the USAT Hydra-Cushion car can be seen at Lee A. Gautreaux's site sponsored by Railfan.net

So whilst the USAT conventional DD box car was easy to retrofit with Kadee 830s and you're good to go, the Hydra-Cushion version needed some changes as will be described.
(Note: The conventional DD box car with Kadee 830s mounted without modifications will have wheel backside rubbing on the Kadee box when this car is operated on 8 foot diameter track curves - whereas the Hydra-Cushion box car with projected Kadee box mounting will suffer less so.)

Having given consideration as to what coupler projection should be reasonably attained, I decided to mount the Kadee 830 box with a 0.70 inch face projection from the end sill of the car.
Though the prototype projection can be as much as 0.90 inch (when scaled to 1/29), the Kadee 830 box just does not look right if doing this. (The prototype actually has a narrower draft gear box cross section than the rectangular shape of Kadee 830.) So I compromised on this issue and chose the shorter projection - still sufficient to emulate a Hydra-Cushion type car.

Shown below is a drawing as to how I modified the Kadee 830 box, its lid, and the car's floor pad area to accommodate the projected box. 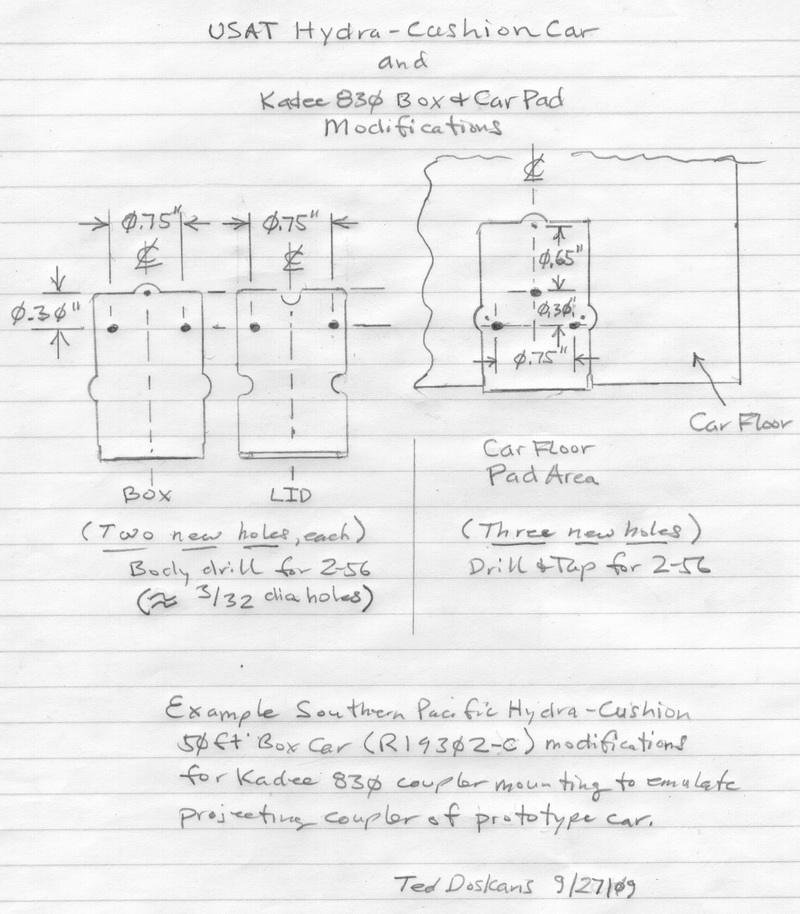 Shown below is the car floor pad area with the three new holes drilled and tapped for using the Kadee supplied 2-56 screws. (Alternatively, you can body drill for the 2-56 screws, and use the Kadee supplied nuts that can be installed with your fingers when reaching your hand through the side doors.) 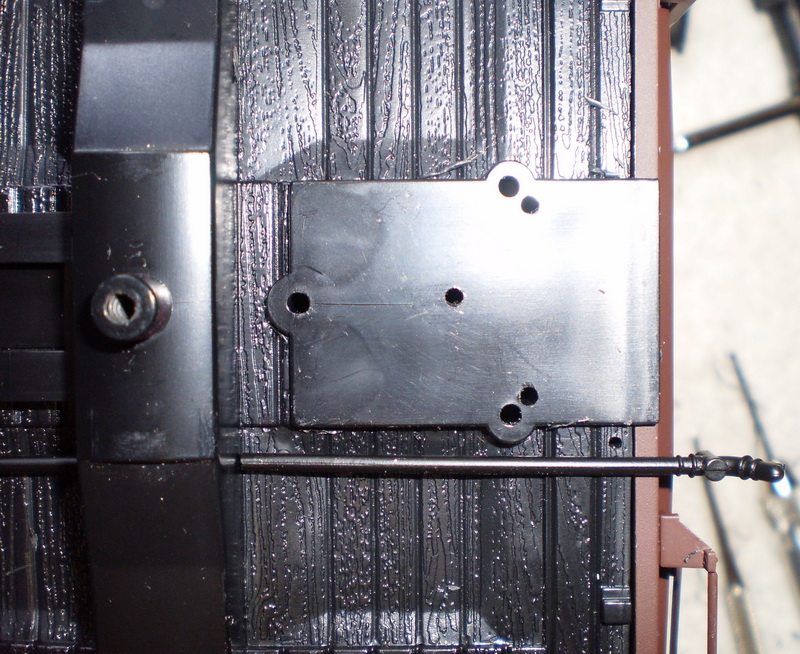 The three new holes are threaded with a 2-56 tap to accept the Kadee 830 supplied screws - thereby avoiding the prospect of trying to reach inside the car to attached nuts. 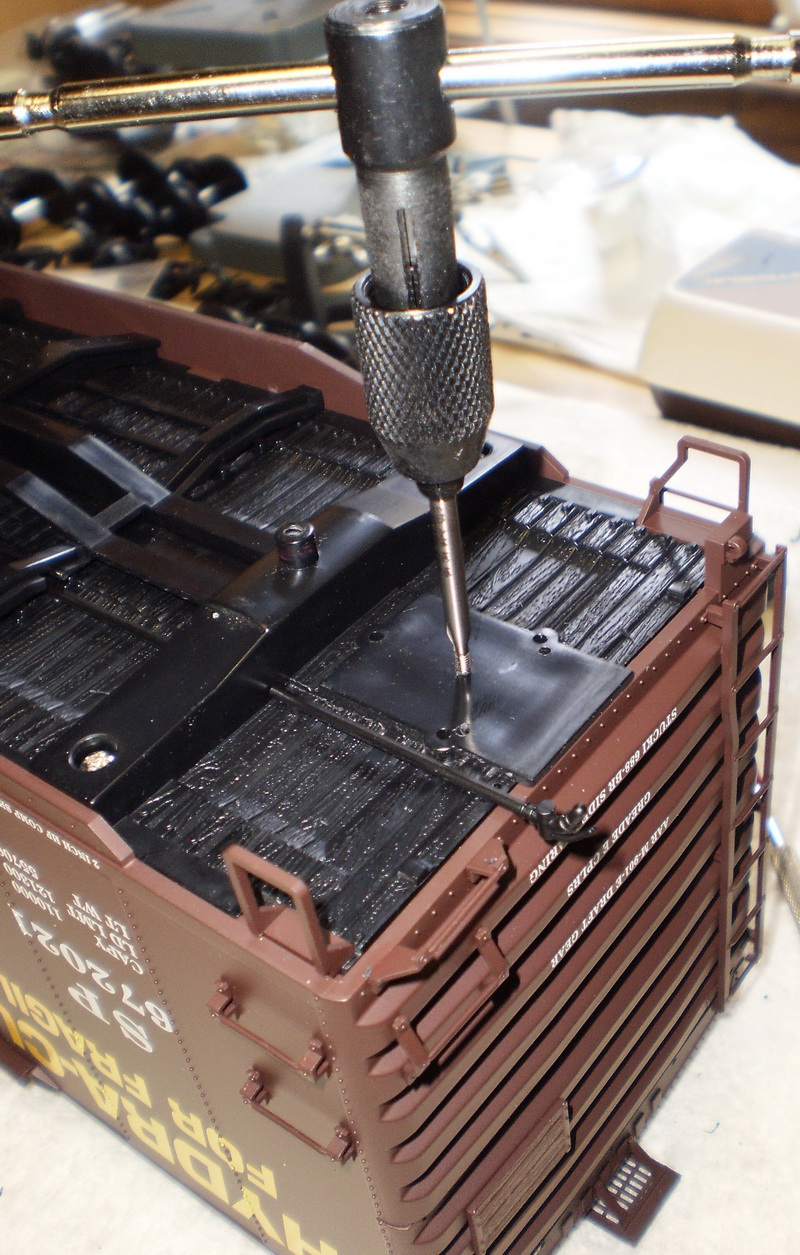 For mounting purposes, I placed the additional two holes within the 830 box and lid so operation of the coupler shank would not be restricted. Though it was tempting to place the two holes near - but just short of - the existing side holes, this would result in them being unacceptably located at the car's end sill area when mounting the box with the desired 0.70 inch projection. 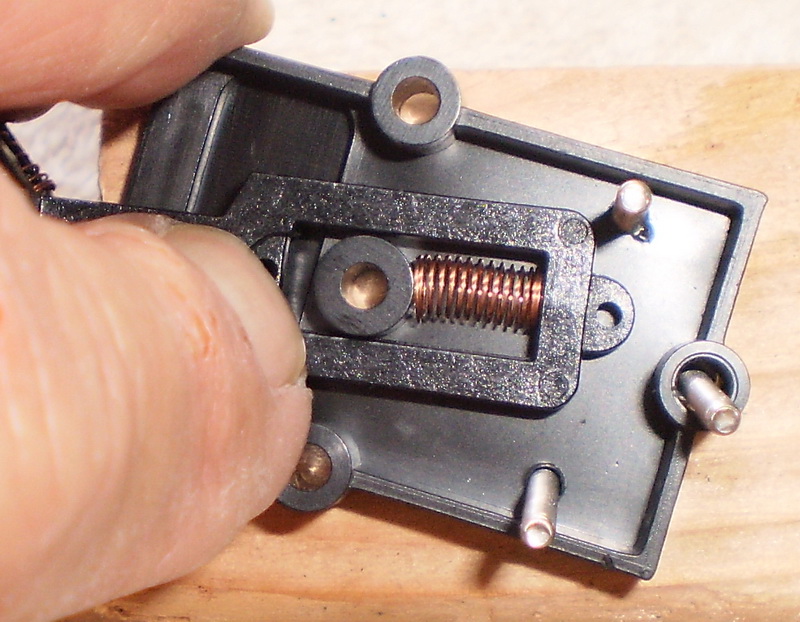 Shown below is the Kadee 830 coupler assembly mounted to the car having the chosen 0.70 inch projection.  (Note the supplied USAT extra uncoupling rod meant to straddle the Kadee 830 box was installed, too.) 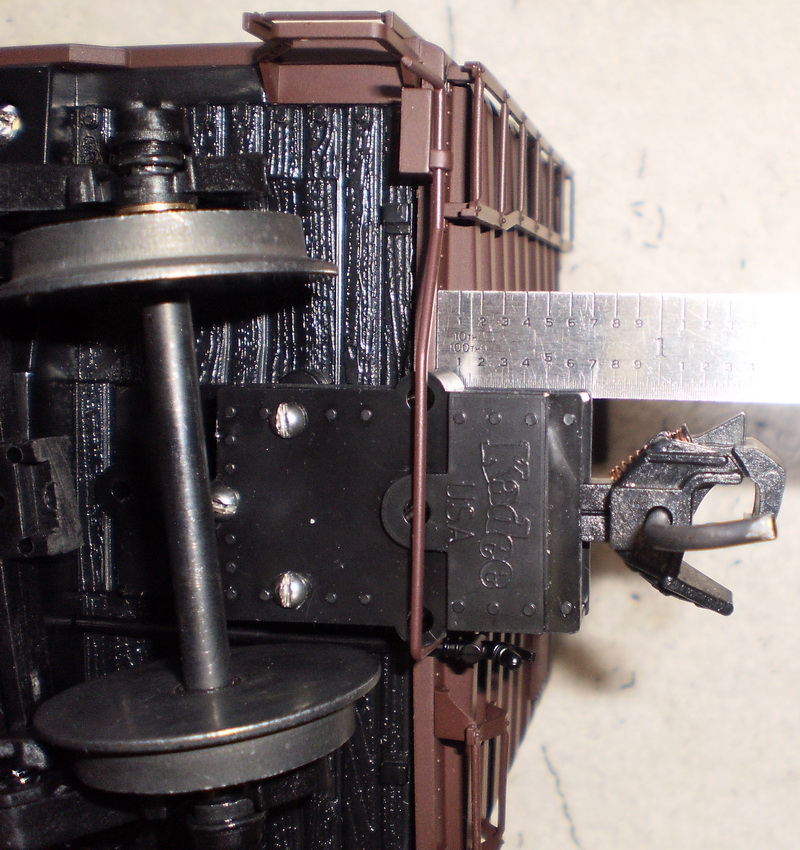 As to R & R of the uncoupling rod, first, pry up the factory installed rod at its end near the coupler box pad. At the other end of the rod, care should be taken so as not to break off the little plastic retaining loop.
I found that the loop was pressed in as it became loose when sliding the rods in and out around their bends. 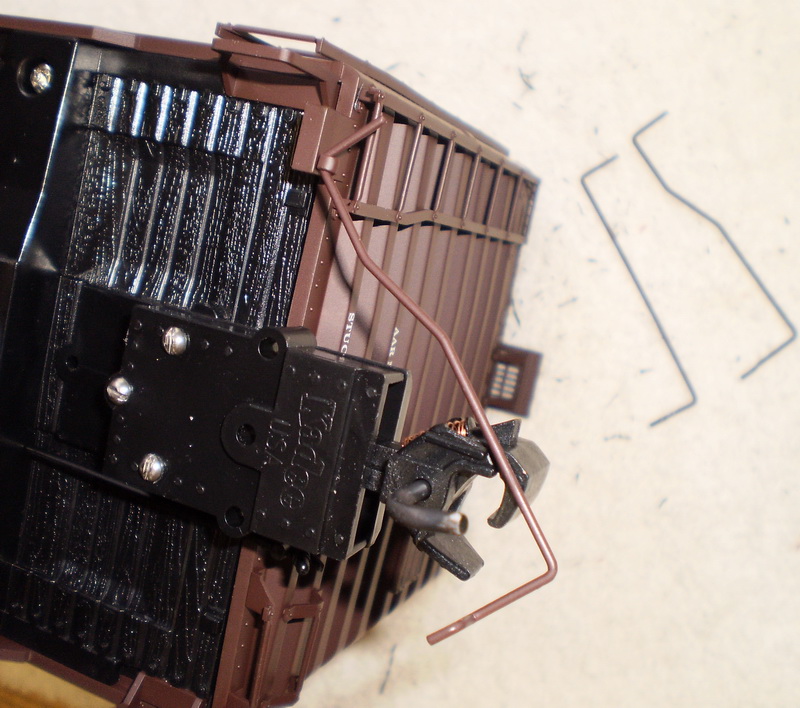 I used a small wood stick to press against the loop mounting point to reseat it after installing the new rod. 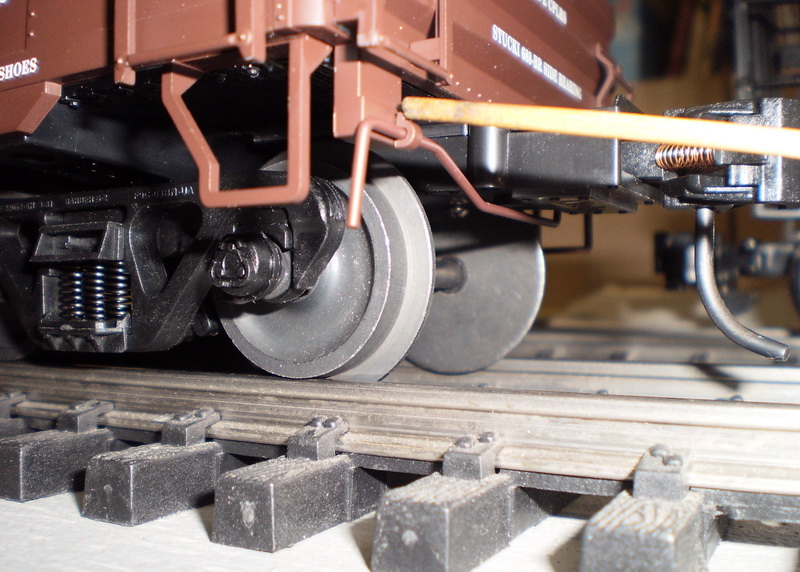 Now for the Trucks & Wheels:

Available trucks include several possibilities.
Shown below from left to right is the car equipped with my choice of Aristo's Barber truck - but having AML wheels installed. At the center is the USAT Intermodal truck. At the far right is (was) the originally installed USAT Bettendorf friction bearing truck.

I chose to use AML brand metal wheels in the Aristo Barber roller bearing type truck. 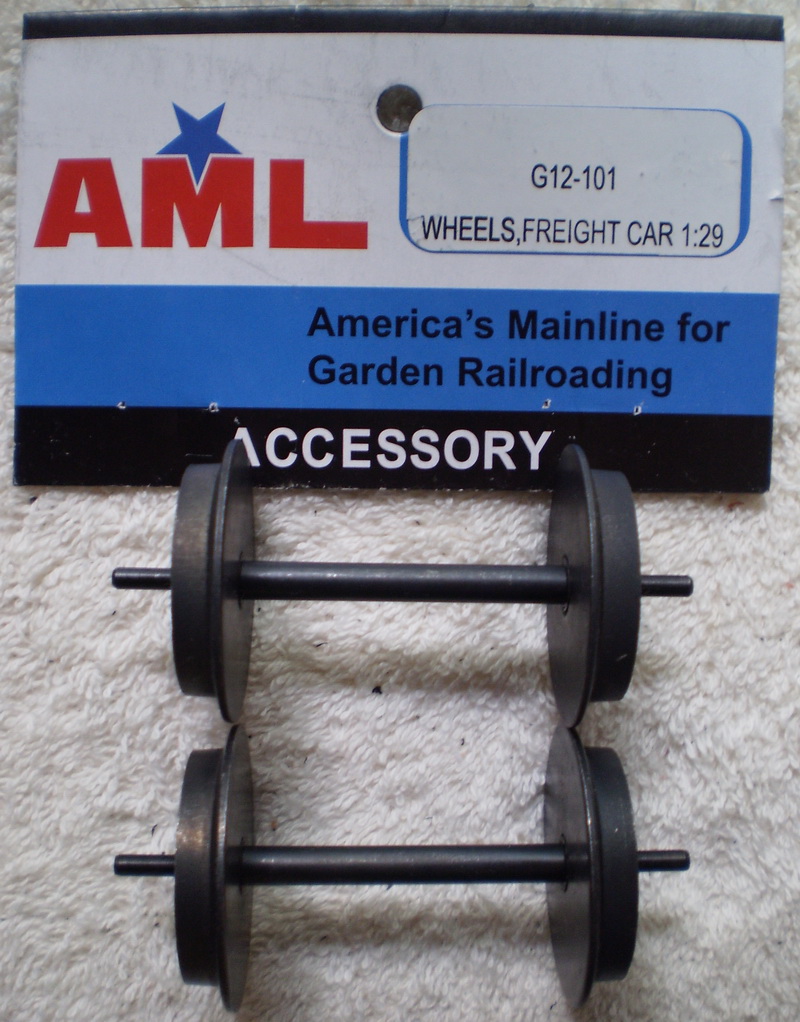 I used the AML wheels in the Barber truck because they are finished in black and had the widest back to back wheel spacing whilst being in specification using a gauge to check it. (Though not exact, the Aristo Barber truck seem to best resemble the prototype, too.) 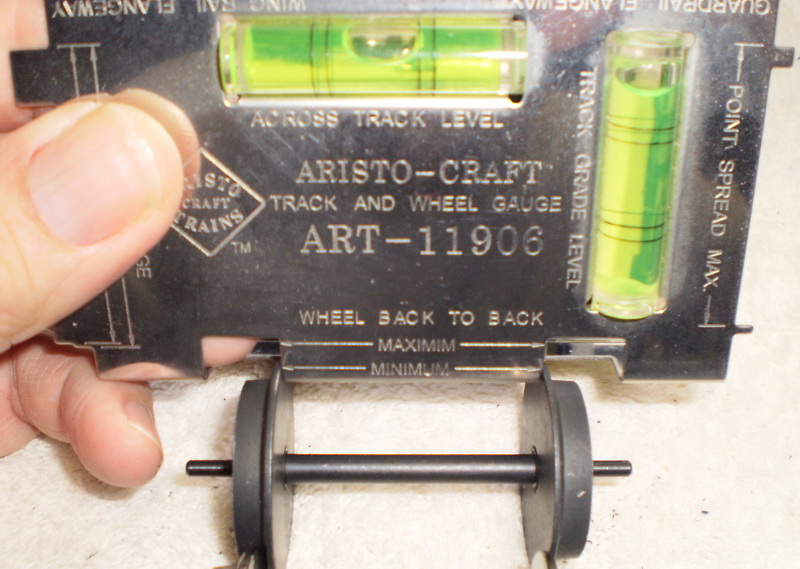 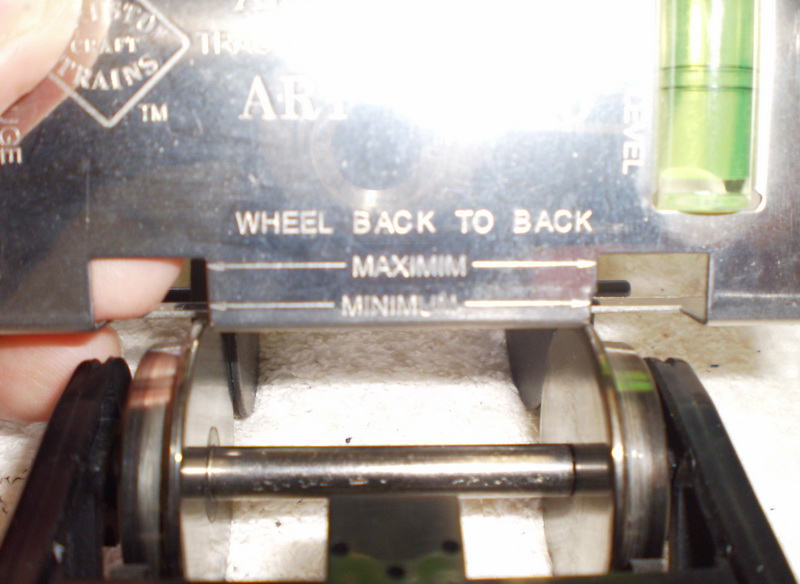 The USAT Bettendorf truck factory installed wheel is shown below: 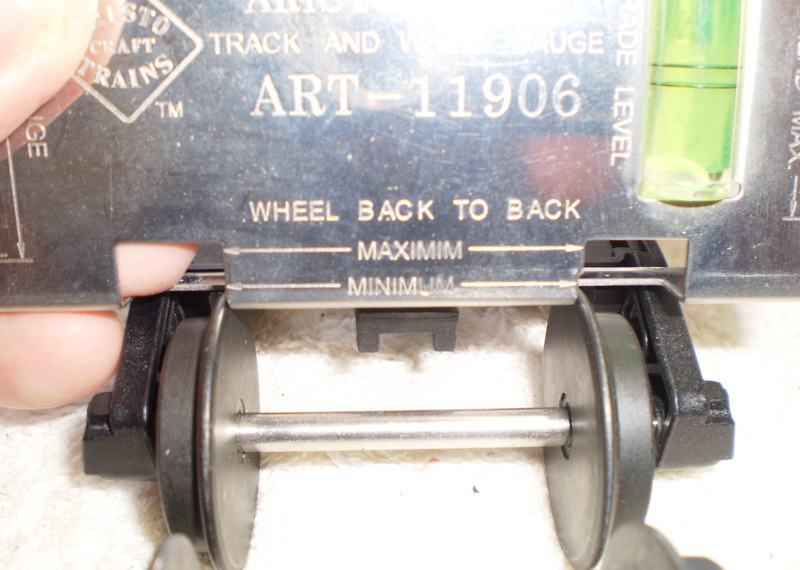 Using wider back to back spaced AML brand wheels helps facilitate the 50 foot car to traverse 8 foot diameter track because of wheel proximity to the Kadee box during such an operation - though there is an ever so slight rubbing against the side of the Kadee box. Filing the side of the box in this area at the contact angle of the wheel should resolve this, and it won't take much material removal to do this.
I am letting the wheels leave a tell-tail mark before doing this.
(My layout only uses the smaller 8 foot diameter track for its rail yard approach.) 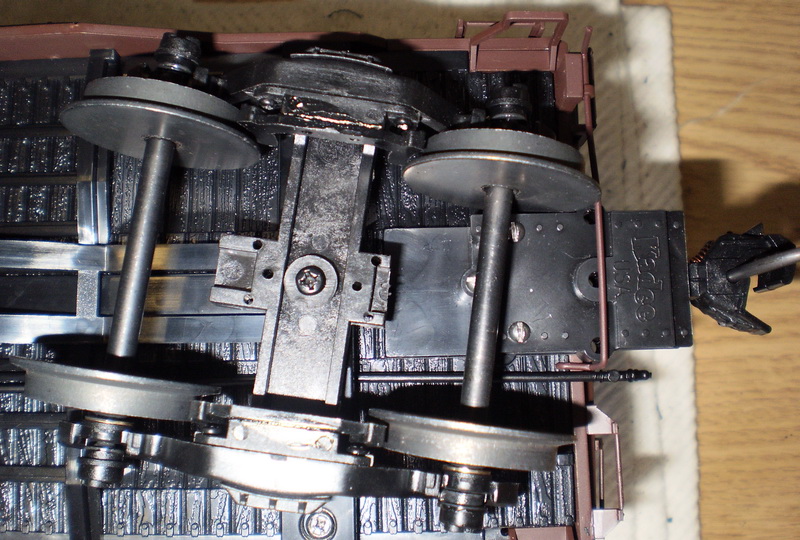 Note that the Aristo Barber truck coupler tang must be removed in order to install this truck on the USAT 50 foot box cars.

Shown below is the rubbing of the wheel on the Kadee 830 box having passed the car through an 8 foot diameter curve several times. 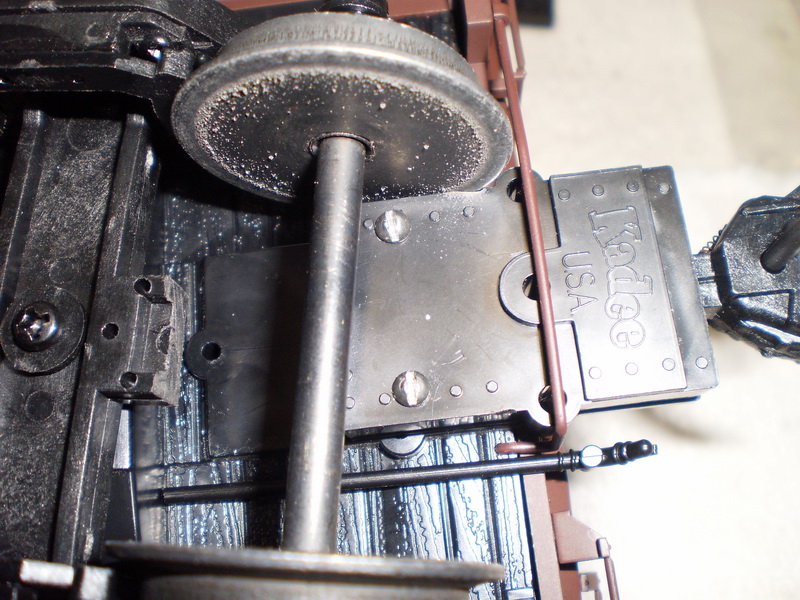 Note the tell-tail effect of the wheel cutting into the box as shown below. 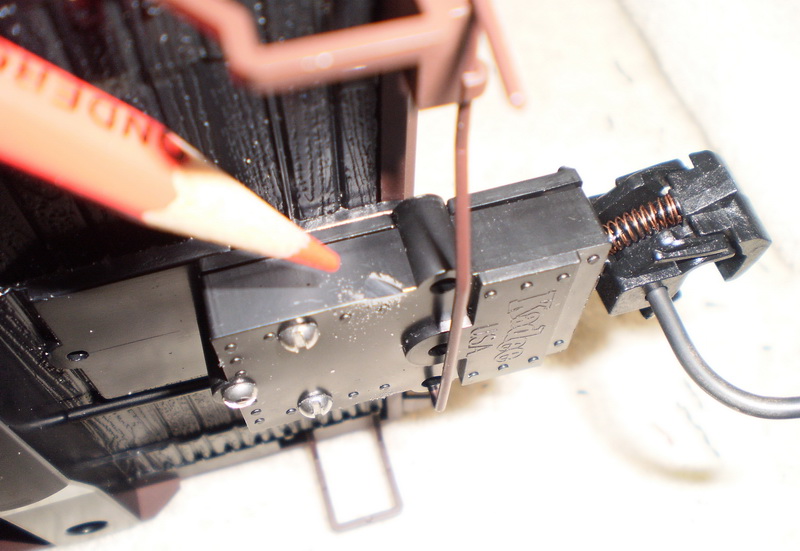 I used a drop of glue placed within the hole of the caps to secure them.
(Note: When installing AML wheels the trucks require disassembly / reassemble - so before I put the caps on, I first lubricated the axles by placing a small amount of Molly Paste on the axle near the wheel hubs and installed the wheels into the trucks so as not to get any lube on the ends of the tips.)
Using a small round stick with a drop of glue on its end, the stick is placed within the bearing cap hole and then swiveled around to distribute the glue. (I used Titebond III waterproof glue typically meant for wood; it does take awhile to setup and harden.) 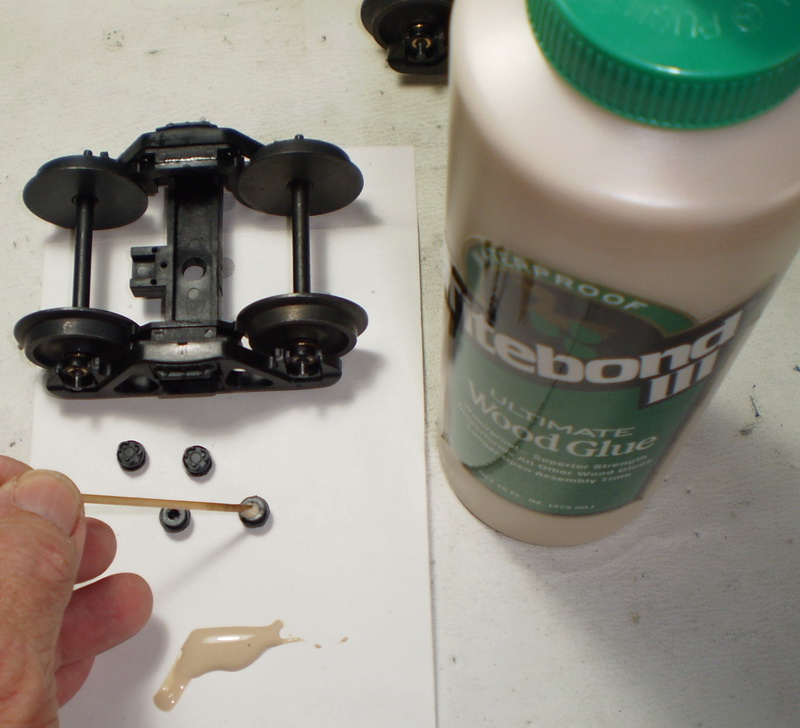 Any excess glue that may get on the end of the cap should be wiped off before placing it on the tip of AML axle. 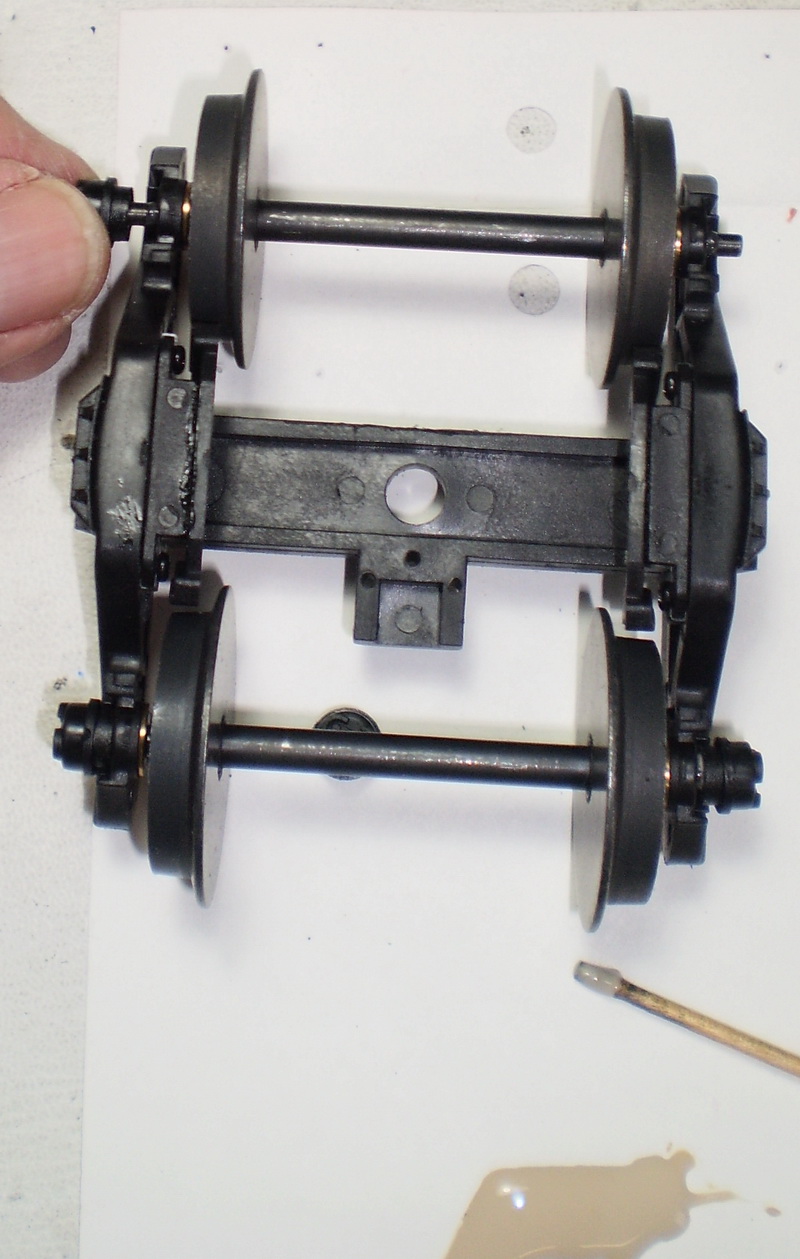 It is intended that the caps rotate with the axles as they turn, so the technique here is to put the caps over the axle tips whilst twirling and aligning them so that they are close to but not touching the brass bearing inserts of the side frames. Turning the axles at the same time helps to check both alignment and freedom of movement. You my have to check and "tweak" them because I found they may move on their own as the glue dries.

Shown below is the installed Aristo Barber truck with AML wheels on the USAT SP 50 foot Hydra-Cushion boxcar. 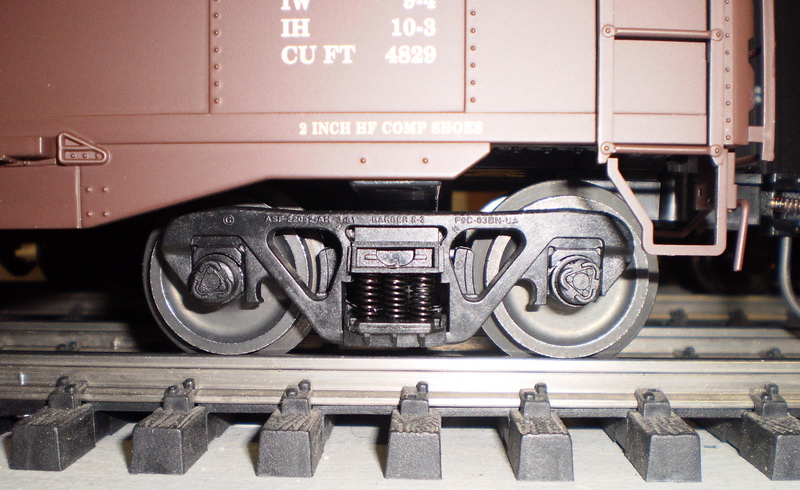 Shown below is the coupler alignment with the Kadee 880 gauge. 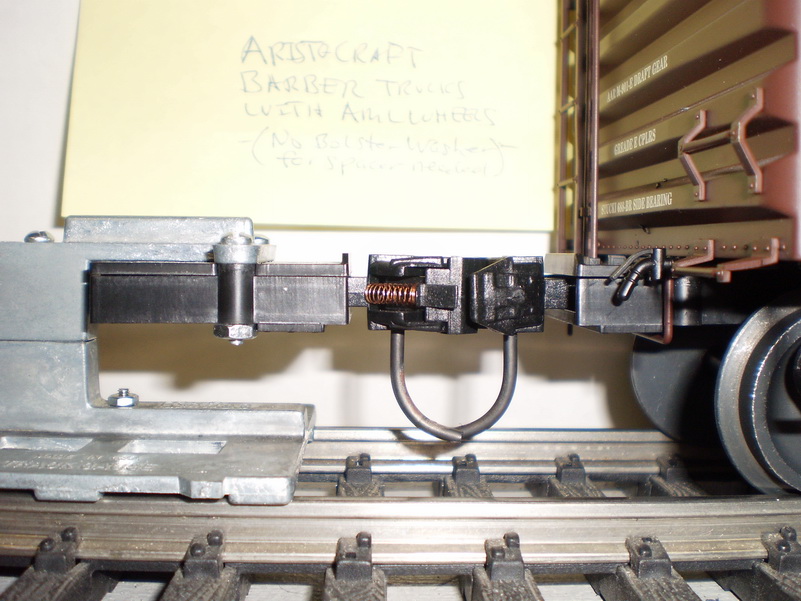 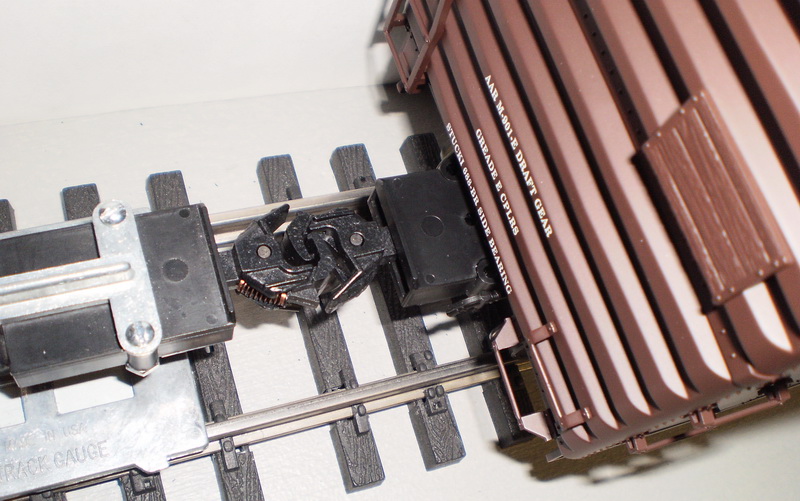 Shown below is the conventional USAT 50 foot DD box car in the foreground and the USAT Hydra-Cushion car in the background. The Hydra Cushion car's added coupler projection is very noticeable. 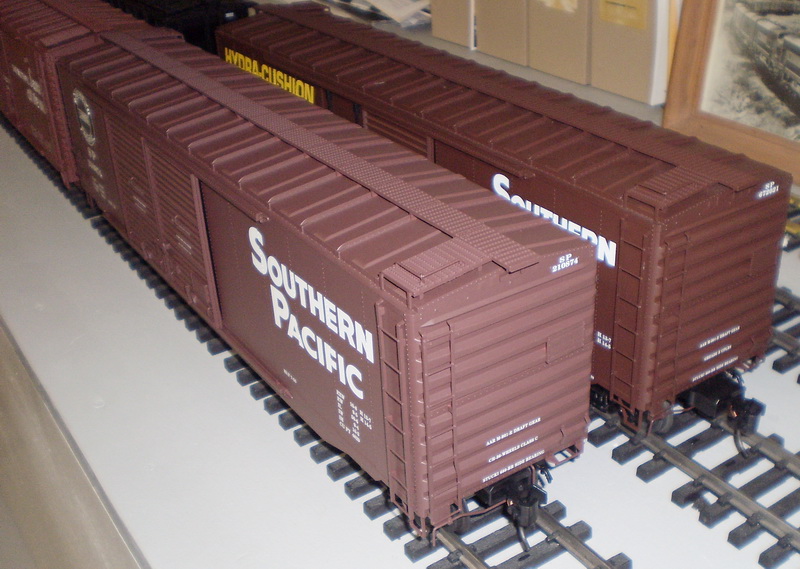 I chose to use the Aristo Barber truck because it better resembles the prototype in that the top of the side frame is relatively flat across it whereas the USAT Intermodal truck has upswept ends at the top of side frame.
However, for those folks who choose to use only USAT parts, the Intermodal truck normally found on the USAT container cars can be used. These type trucks have a straight across bolster so they will fit OK, but these trucks require a spacer washer of about 0.030 inch thickness for proper coupler Kadee 880 gauge alignment.
When trying these trucks on the car, I used the nylon spacer washer as shown below. 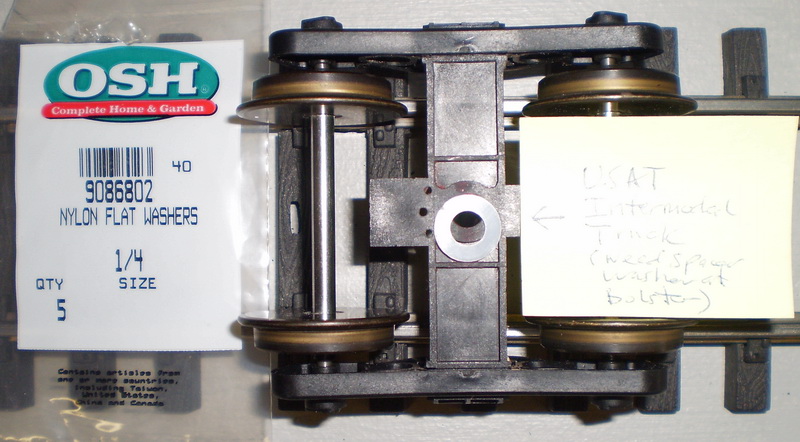 Shown below is the washer placed on the car floor mounting post. 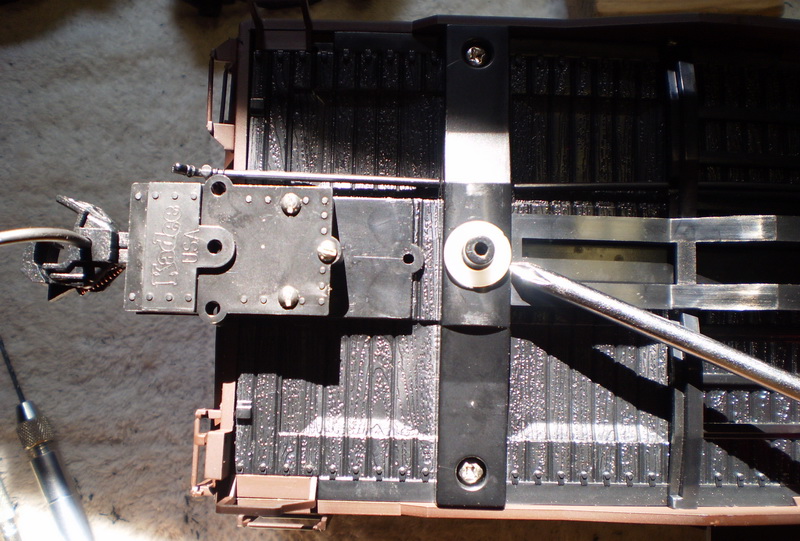 When mounting the truck to the floor post, I also used a small diameter #4 washer placed on top of the post - also 0.030 inch thick - to prevent binding of the truck once the screw is tightened down. 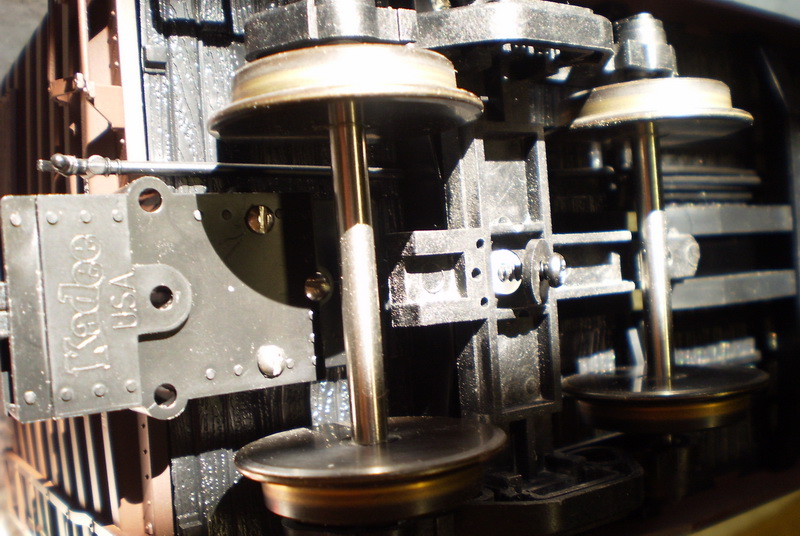 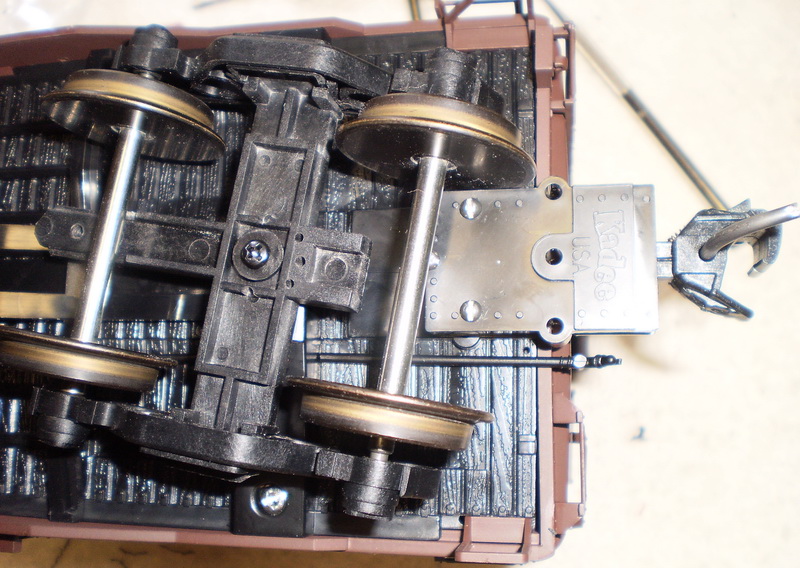 Shown below is how the car looks with the USAT Intermodal truck as installed with 0.030 inch spacer washer. 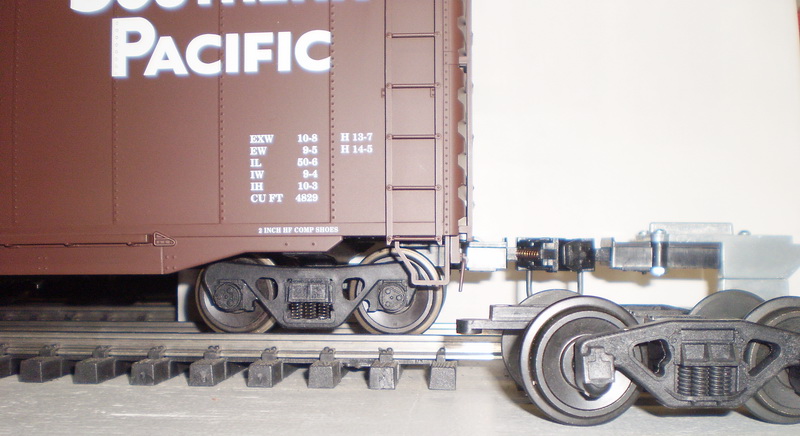