As can be seen below, the LGB 3 bay hopper, when lowered, is a realistic match to competitive brands.

To be described for discrete application of Kadee boxes is an example Baltimore and Ohio (B & O) New Old Stock (NOS) made in China car obtained on sale from Trainworld.  This sale car is now sold out.

This car's packaging includes an Automatic Car Identification (ACI, aka KarTrak) color bar code label decal set for customer installation.  Prototype cars with ACI were prevalent in the 1970s; however, in later years the ACI system was replaced by an Automatic Equipment Identification (AEI) electronic transponder.

The particular B & O example car has factory trucks with plastic wheels; however, LGB has reintroduce the 3 bay hopper car, albeit at greater cost, in new road names that have its factory trucks fitted with metal clad wheels.  A newer production ACF car with these wheels will be described in Appendix A to exemplify the 3-D printed CamPac coupler boxes.

This car can be easily fitted with body mounted Kadee center set type couplers.  Either the Kadee wide box 906 or narrow smaller foot print box 907 can be used.  As an alternative, now available is a direct fit (no spacer plate) 3-D printed small foot print box as described in Appendix A.

The example B & O car is now shown below fitted with Aristo Barber trucks to lower it.

With the car lowered, it is shown fitted with the wide box Kadee 906. To compare both Kadee 906 & 907 type couplers, I chose to use a "universal" spacer plate needed for body mounting couplers.

To realistically body mount couplers, it happens that lowering the car to a more prototypical height is behooving.  (In concert with lowering the car, body mounting Kadees requires a spacer plate affixed to the under side of the car body - to be described later.)

Length and width is measured for the LGB car fitted with body mount Kadee 906 couplers as described herein.  If body mounting Kadee 907s, the length measurement is expected to be the same. 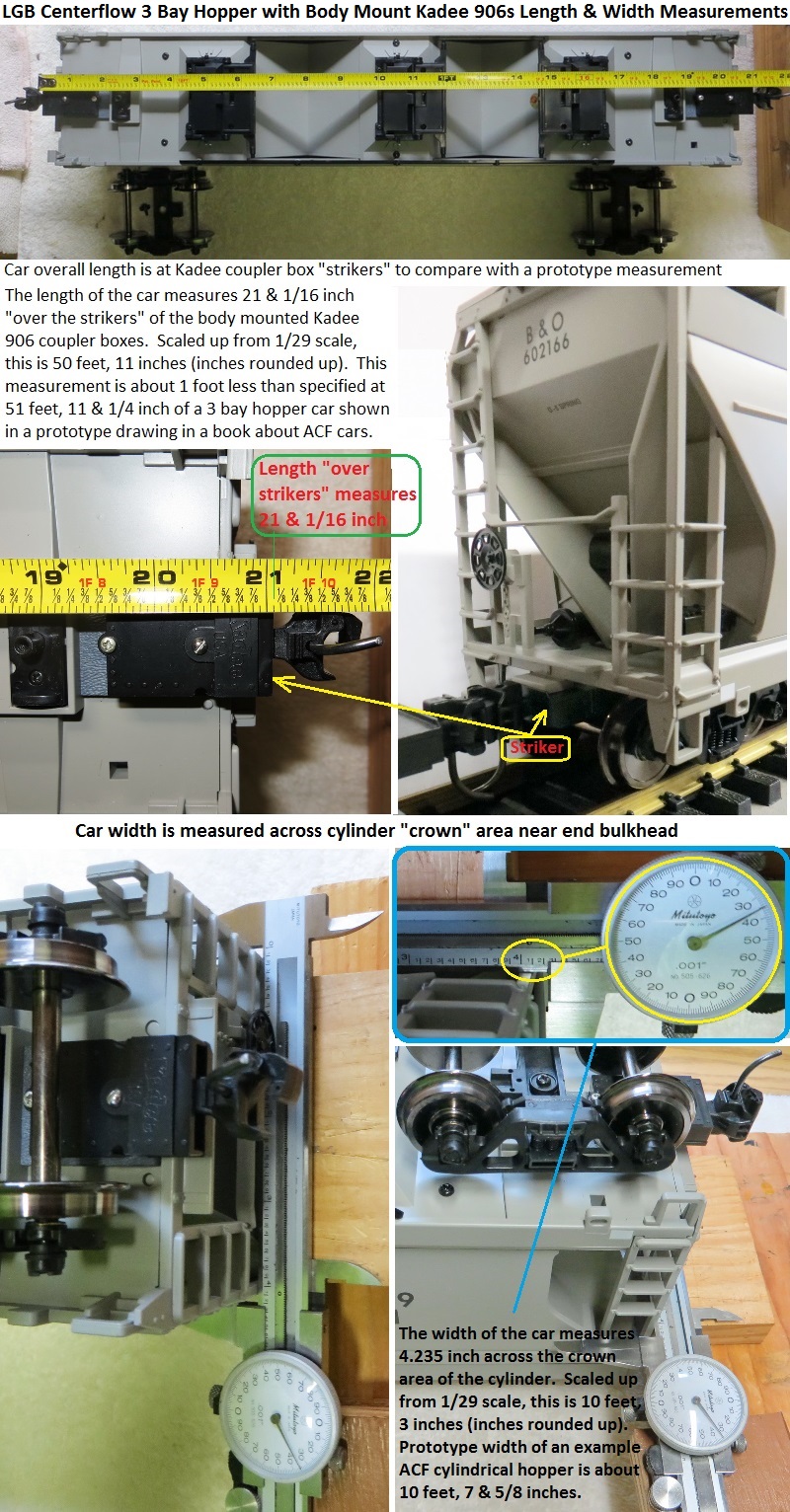 The car can be refitted with a different brand truck, or its factory truck can be modified to lower the car. 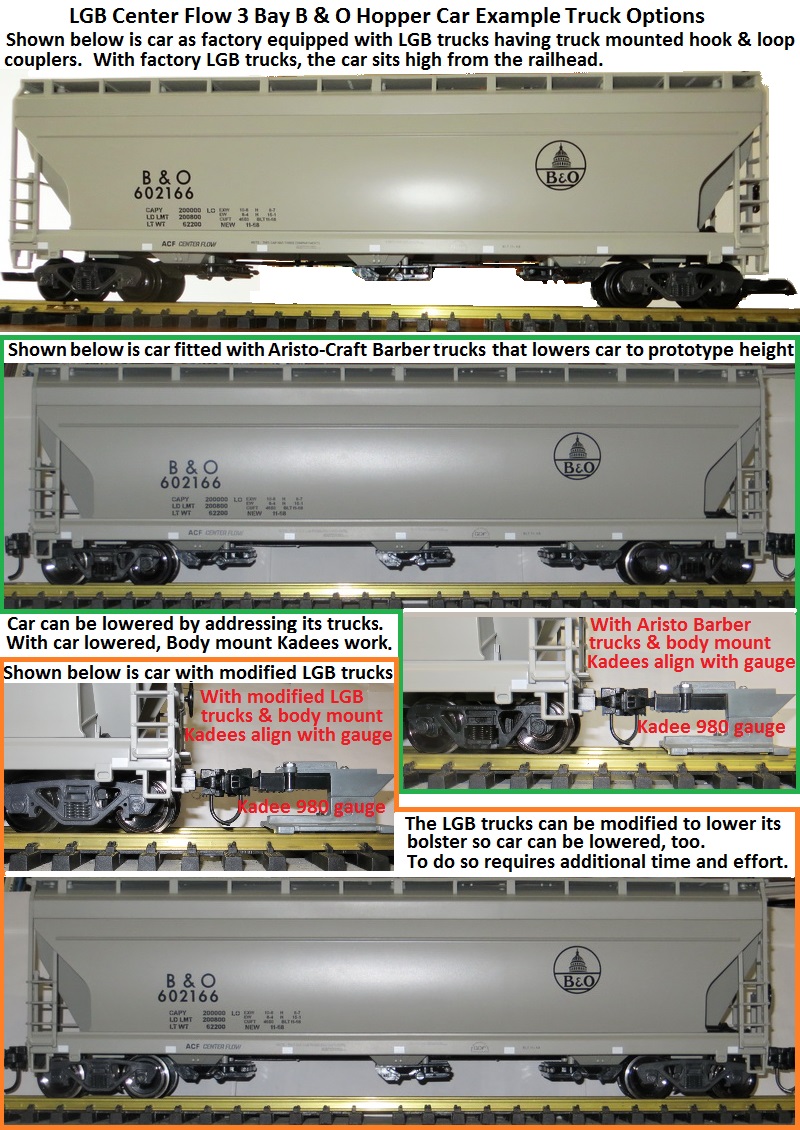 Lowering the car is easily done by replacing the LGB factory trucks with Aristo-Craft Barber roller bearing trucks.  Other brands of trucks (including the Kadee 70 ton & 100 ton types) can be used, too. These will be described in Appendix A in concert with 3-D printed coupler boxes.

Note:  If using the Kadee truck, the adaptor kit's parts that comes with the truck to mount it for the LGB car should not be used since it would raise the car from the railhead.  Some of the parts meant for other brands along with eliminating the base plate works best.  This is how I dealt with AML and USA Trains cars as described in Vignette, title:
Kadee Body Mount Considerations.

Alternatively, the LGB factory roller bearing trucks can be modified and fitted with slightly smaller diameter Aristo metal wheels to lower the car, however, this requires much more time and effort to do. 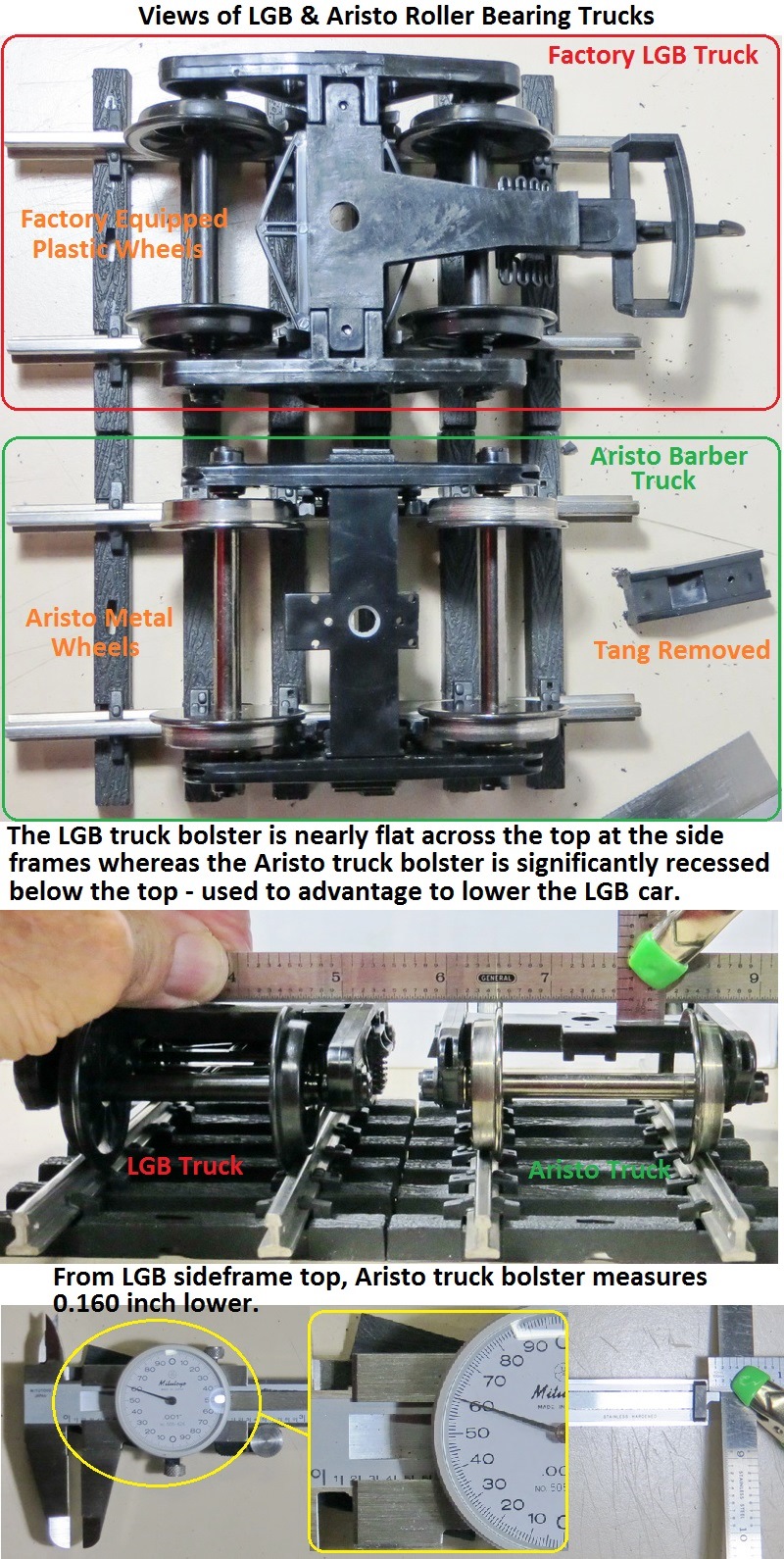 The car, when equipped with trucks having metal wheels, is of benefit since it adds more weight at a low center of gravity, particularly useful when operating the car in a long or heavy train traversing curve track. 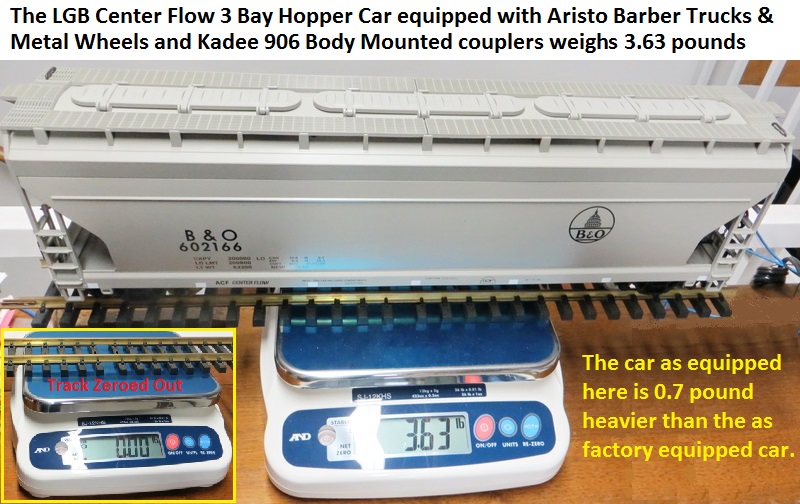 To compare both Kadee 906 & 907 type couplers, I chose to use a "universal" spacer plate needed for  body mounting couplers. (Note: This spacer plate is not needed and not used when choosing CamPac 3-D printed coupler boxes - described in Appendix A.)

The spacer plate material is ABS plastic.  This material can be obtained at low cost from TAP Plastics with one side textured.

From my experience with TAP Plastics, the minimum width they will cut is 1 inch wide, therefore, they can typically cut a 3 to 4 foot long strip to the width shown in the dimensional drawing that follows.

A razor saw and file are used to cut and trim the draft gear box.

Fitting the spacer plate and trucks are illustrated below.

The car's bottom doors are mechanically functional; however, if left open during car operation in a train on a layout, they can get stuck in the track resulting in derailment and possible part breakage. 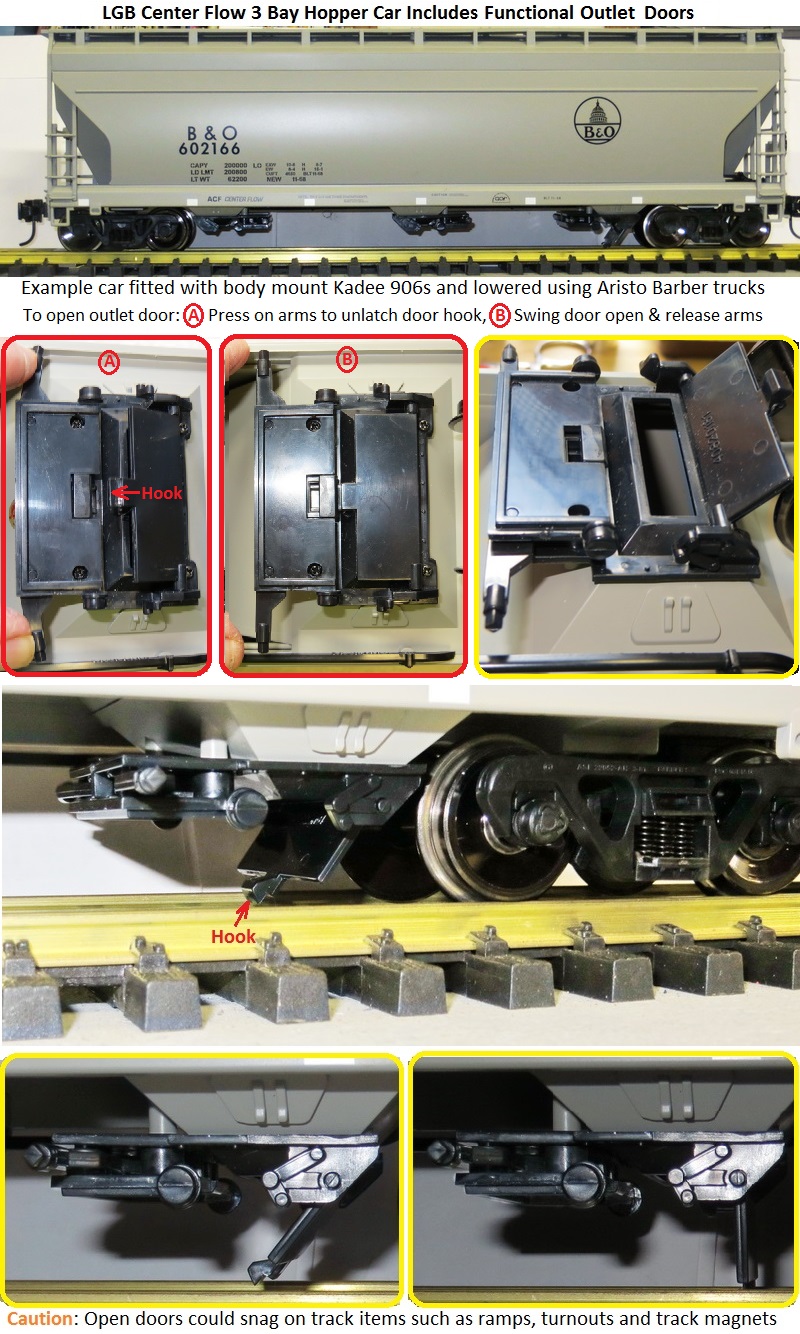 3-D printed CamPac coupler boxes for the LGB 3 bay hopper car are direct fit (no spacers) that also emulate prototypical draft gear detail of "key and slot" as can be seen below.  The boxes accept centerset couplers, springs and lid from the Kadee 907 kit. The assembled box can be painted to better match a car's livery before installed. 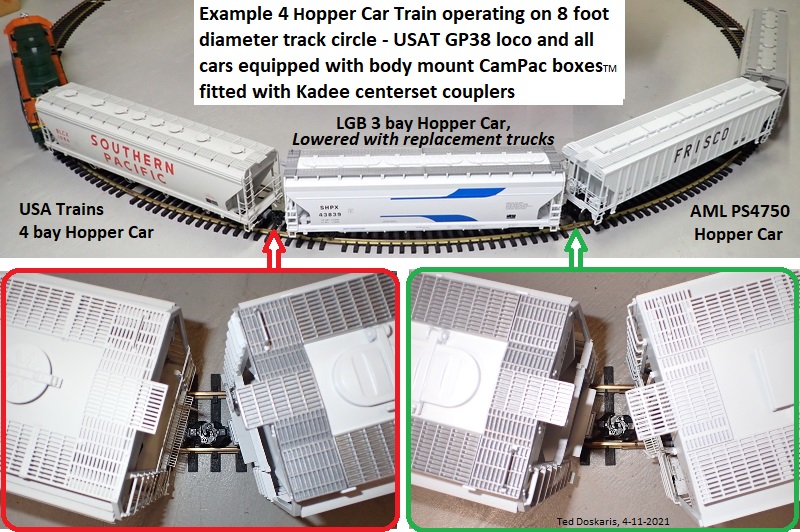 With CamPac boxes fitted with Kadee centersets, the LGB hopper car can operate on 8 foot diameter or greater track curves, though layouts are to have a straight section of track the length of the longest car between opposite diverging ("S" bend) paths. 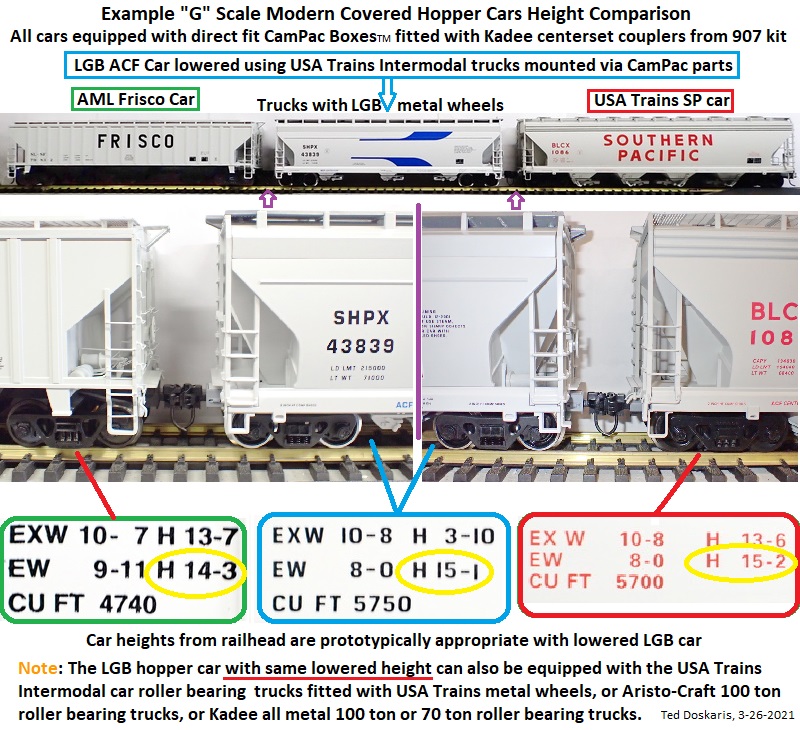 For mechanics reasons, what opens up more truck choices to realistically lowering the car is the use of the CamPac chassis bolster cap.

To help choosing, attributes of several truck / wheels tested for use on the LGB 3 bay hopper car are described in the illustration below. The lowered car height from the railhead is virtually the same for any of the choices when trucks are installed as described the Installation Guide. 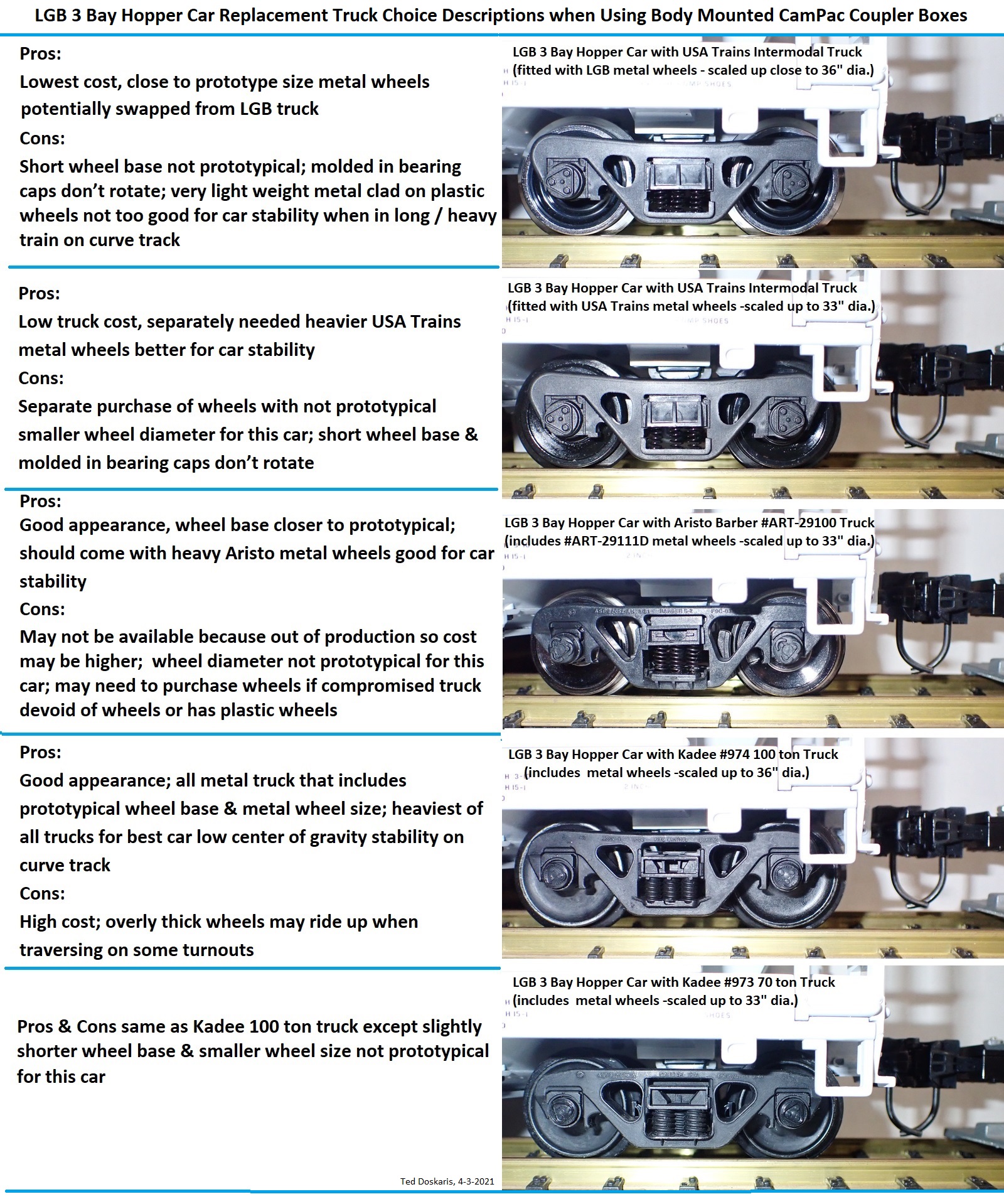 Choices of trucks & wheels used affects the weight of the car. The following illustrations show the measured weights. 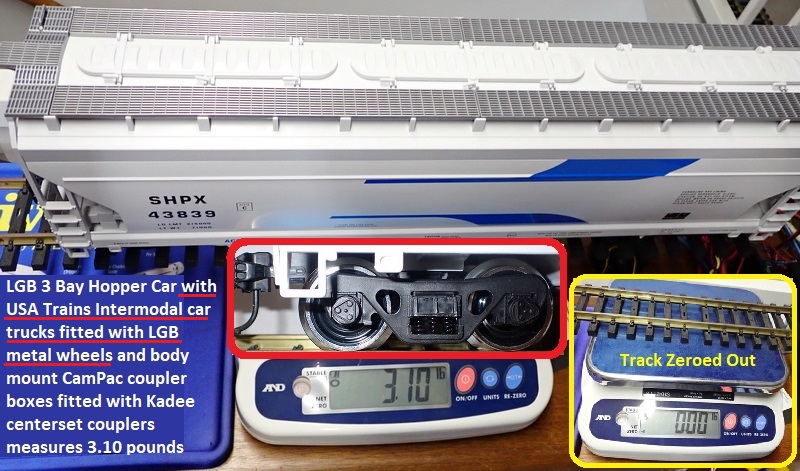 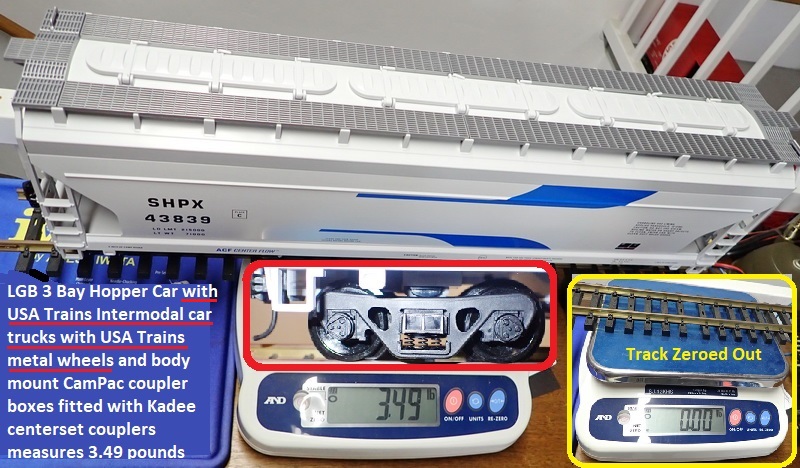 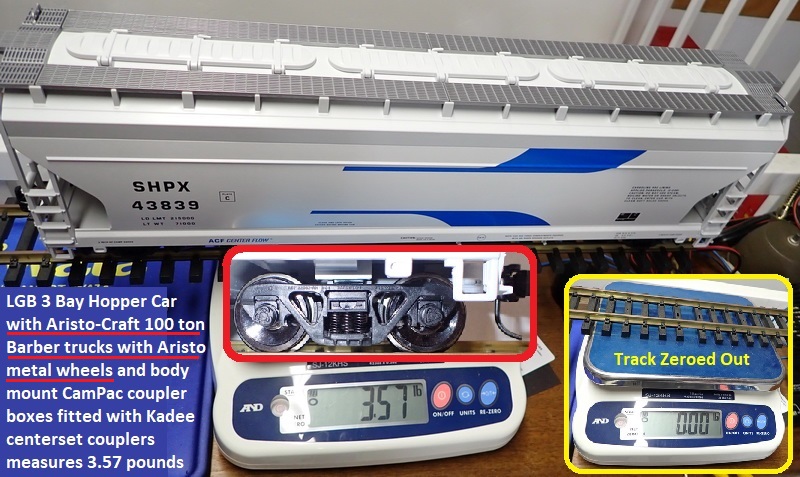 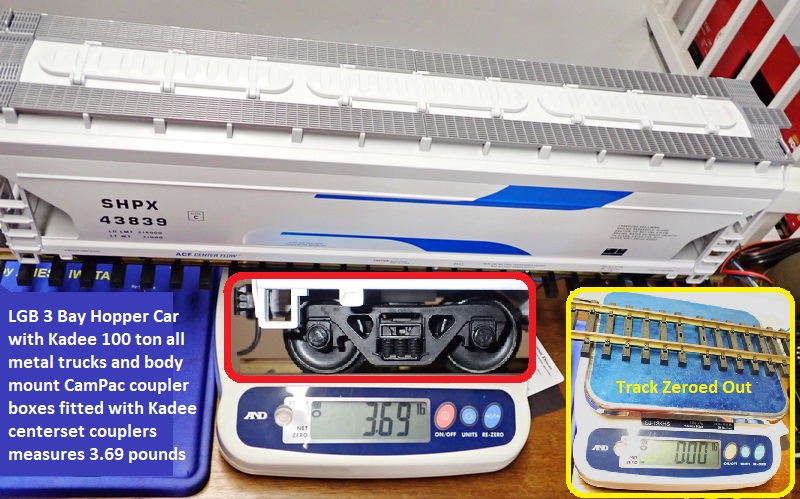 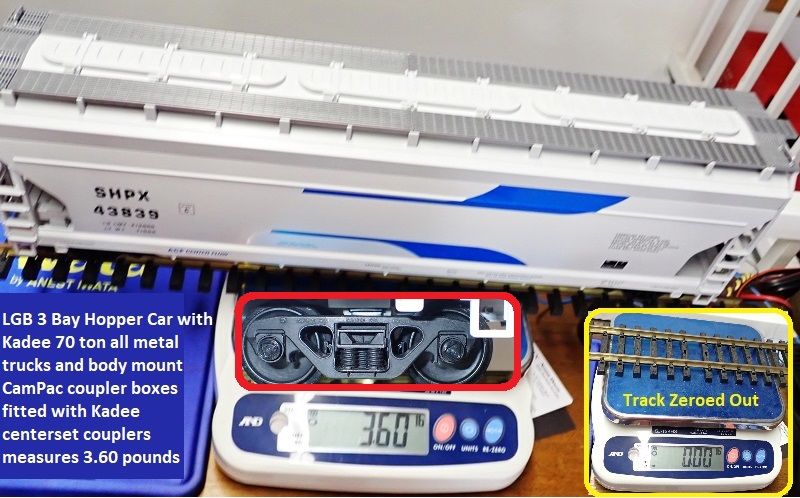 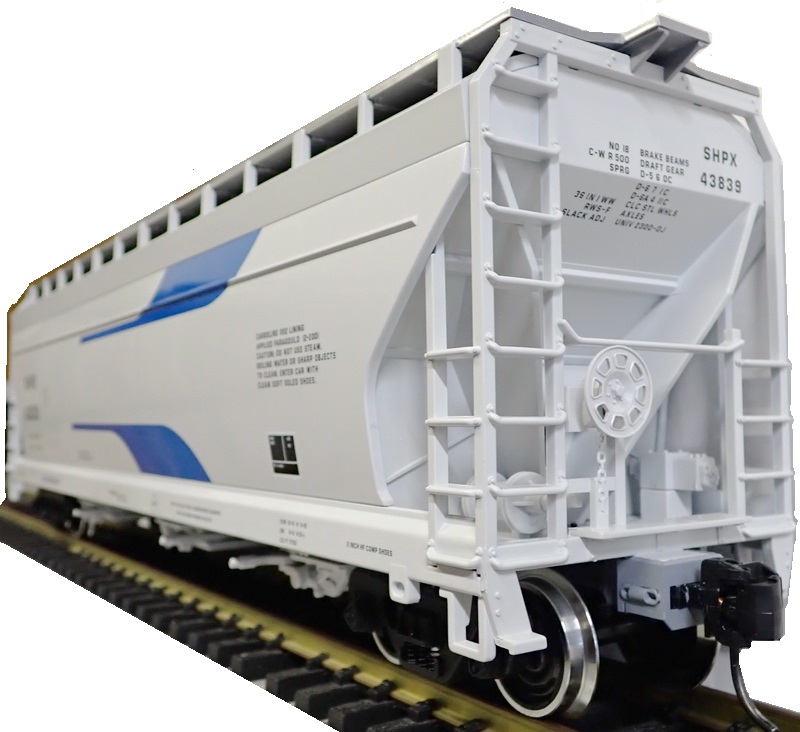 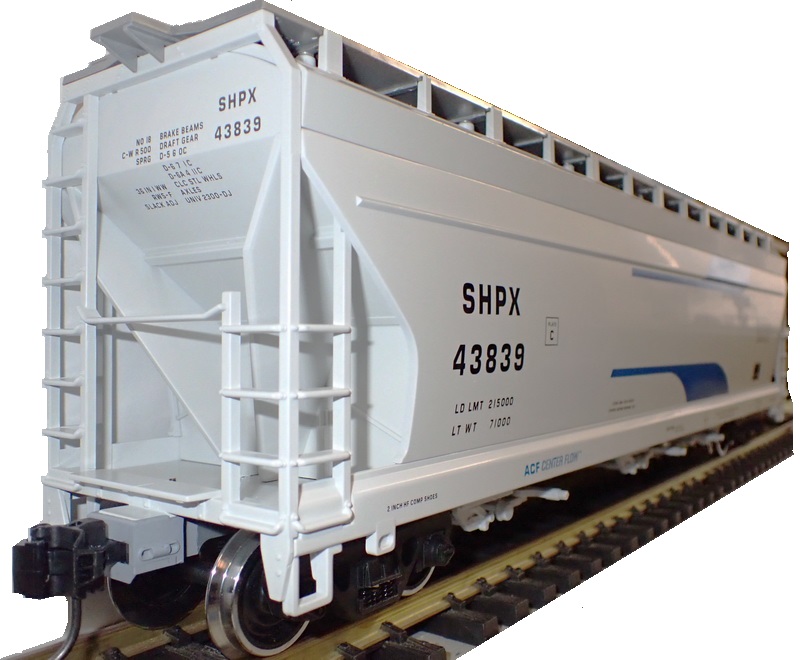 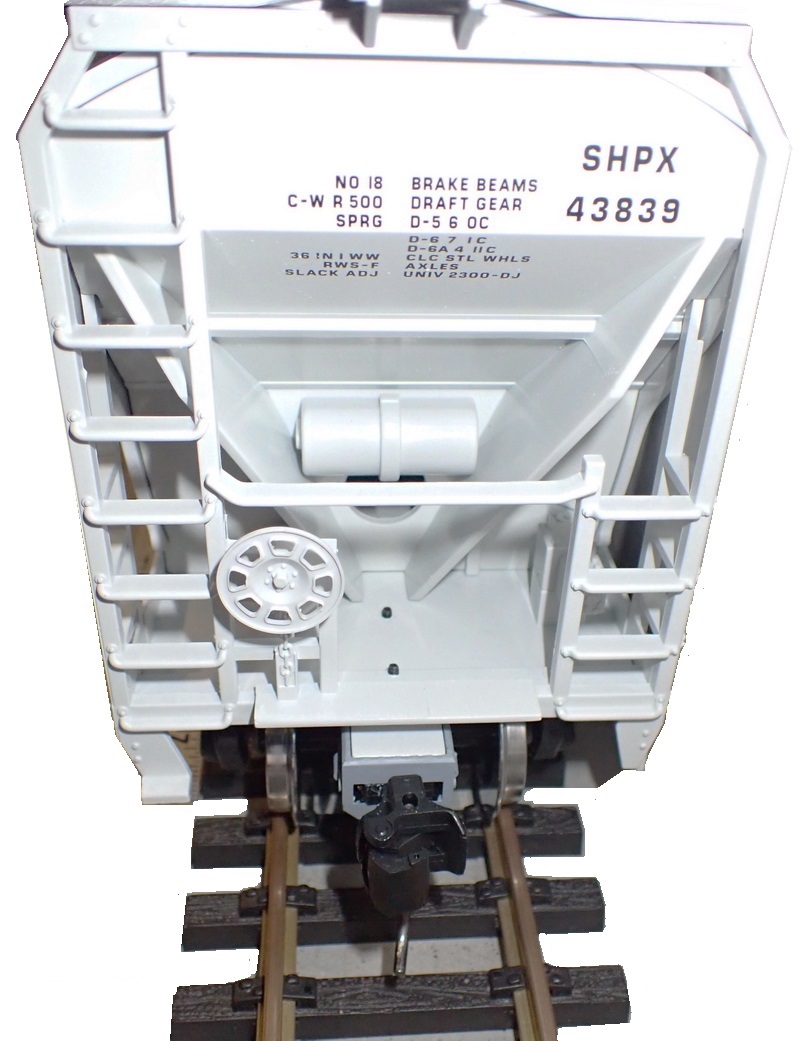