Adding clearance for the heavyweight trucks & improving the truck "attitude"

These cars are famous for derailing. On problem is lack of lubrication on the pivot and bearing surfaces for the truck, for both the old and new style trucks, and I have a Santa Fe set that derailed out of the box, and lubrication fixed it right off. After all the stories, I made sure I bought the set with the new style trucks.

Now I am working on some Napa Valley Wine Train cars, and most are the old style. As I had them in the cradle, I was checking how the trucks swiveled, and I found several places where there were downright obstructions to the truck movement, both up and down and side to side

The more I looked, the more issues I found. I may have been overzealous in removal of possible obstructions, but I was having issues after the Kadee body mounts so I took this on with Dremel cutoff disk in hand!

First, I noticed these large plastic bosses were darn close to the truck. I had noticed them before and wondered why the screw is recessed into the boss.

Well, the picture below sure tells the story, the damn truck is riding on these bosses! (clearly if the screw was not recessed, the truck would be scraping on the screw head, even worse. 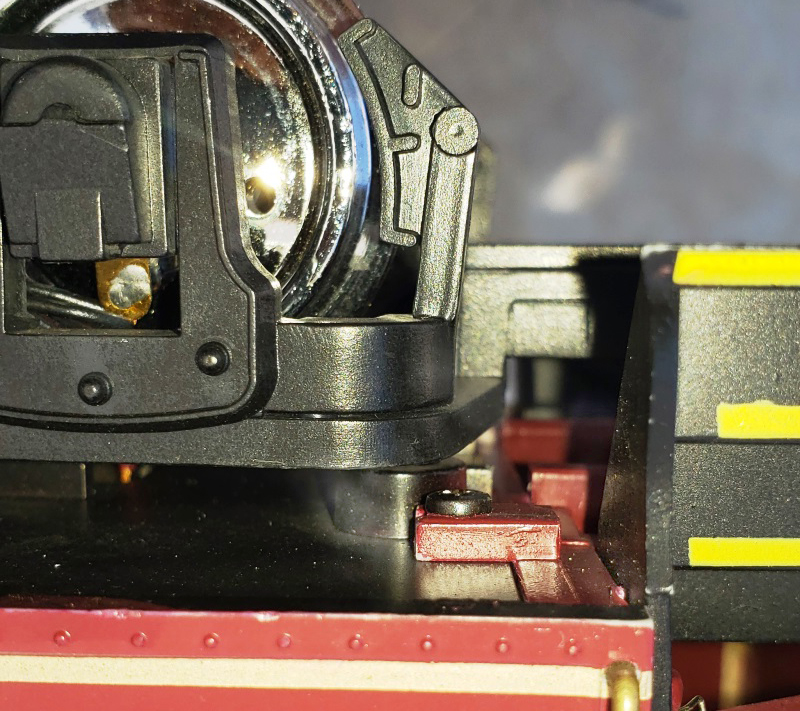 Yes it is that piece of black plastic between the chassis bottom and the truck!!

OK, let's see these without the truck in the way: 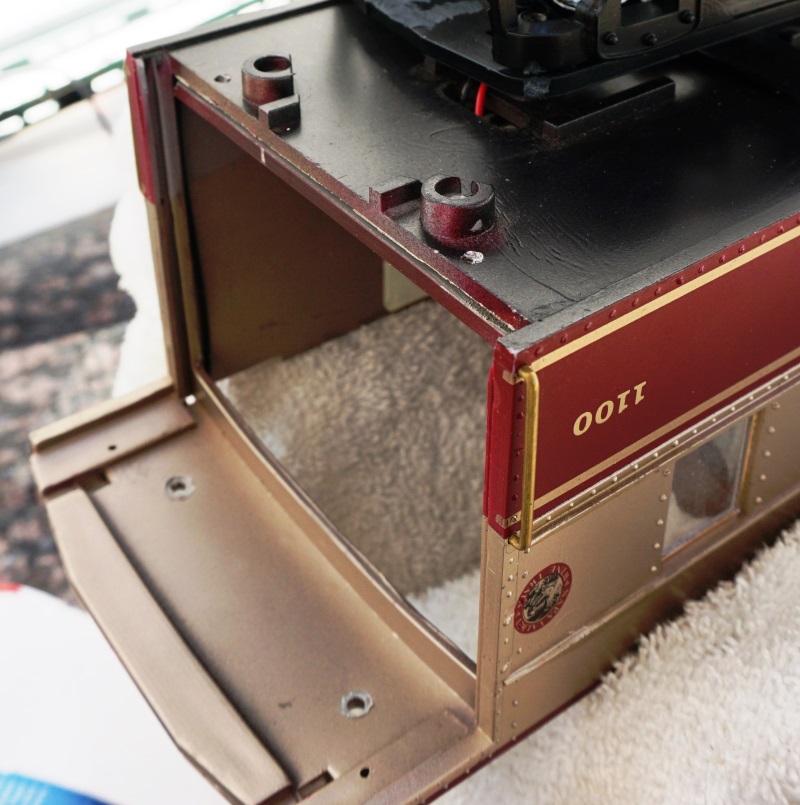 Notice that the insides of these 2 bosses are ALREADY trimmed a bit, my guess is clearance issues with the smaller 2 axle trucks, whereas the 3 axle trucks ride on top of these bosses.

On newer style cars, there can be 2 more bosses with a screw on top, that can catch the truck. I'm going to put flat heads in there and recess them so the truck cannot hit them.

NOTE: do not do this modification on the platform end of an observation car. I suggest you follow Ted's reinforcing methodology for the platform, click here for Ted's vignette.

In any case, they have to go, they were actually TOUCHING while the car was on the track for chrissakes! 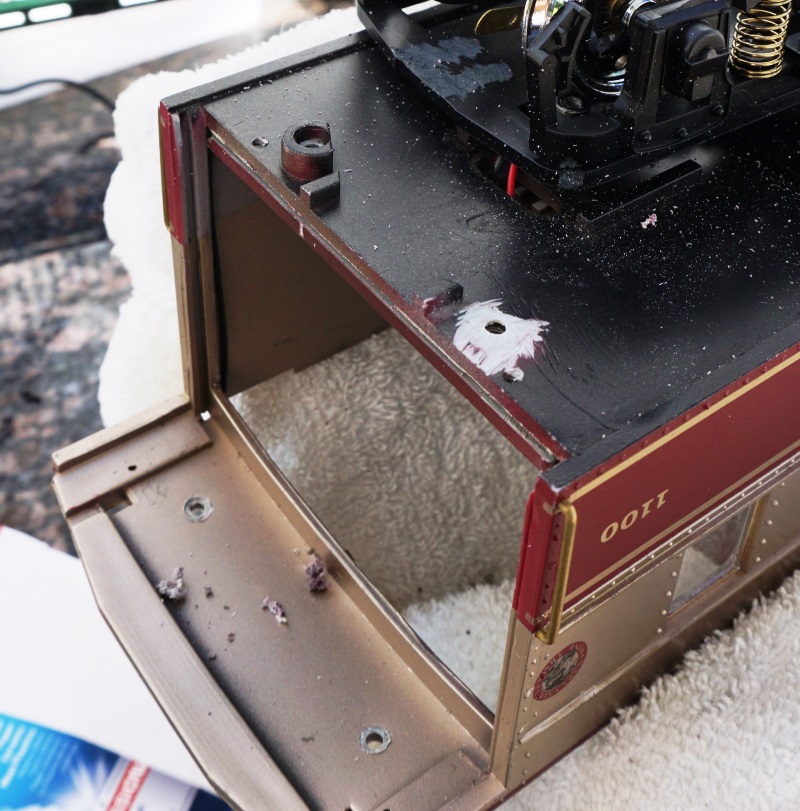 The hole is almost perfect for a 3mm metric screw, Ace hardware has 10mm long ones, .5mm pitch. These are "Truss head" a wider and lower profile head 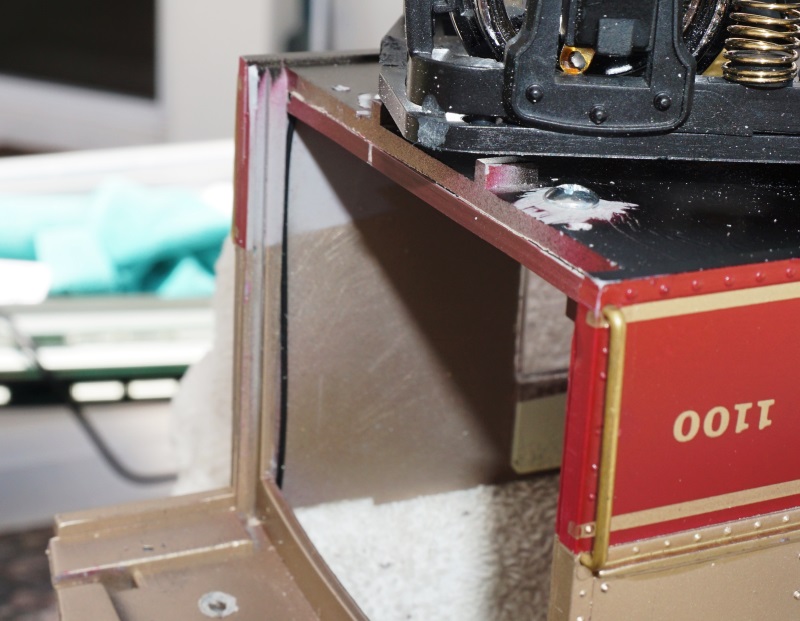 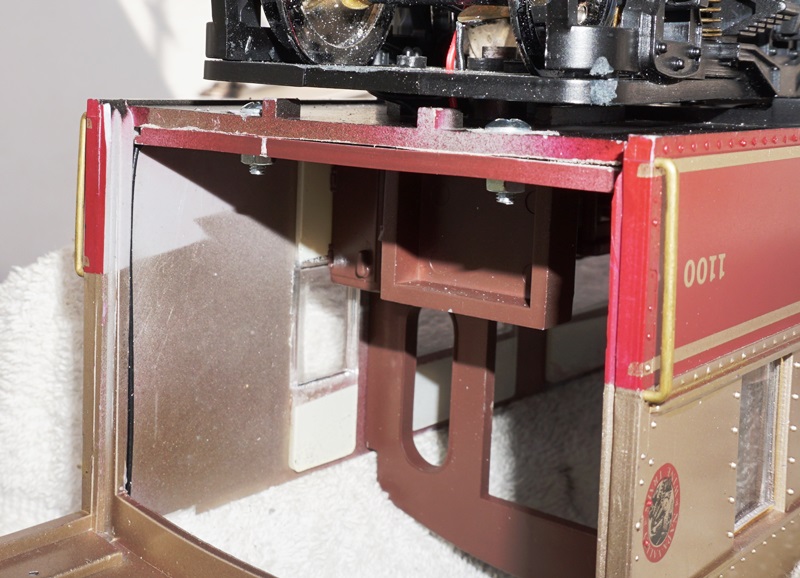 OK, now not much you can do about the screws that hold the bulkhead in place, but there is more clearance there: 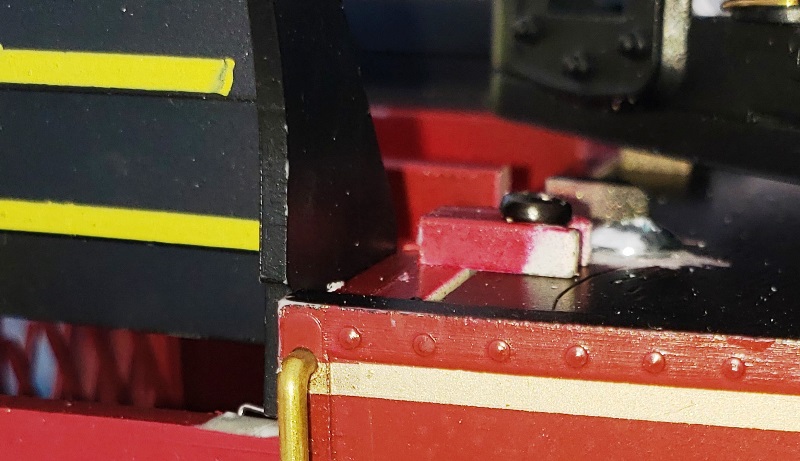 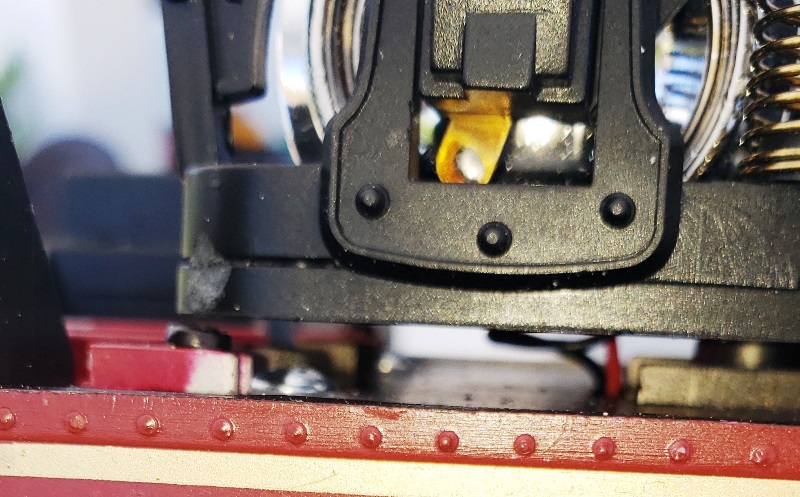 The raised mounts for the ends of the truss rods also can conflict with the truck, and since these cars did not have the stanchions, I removed the interfering block of plastic: 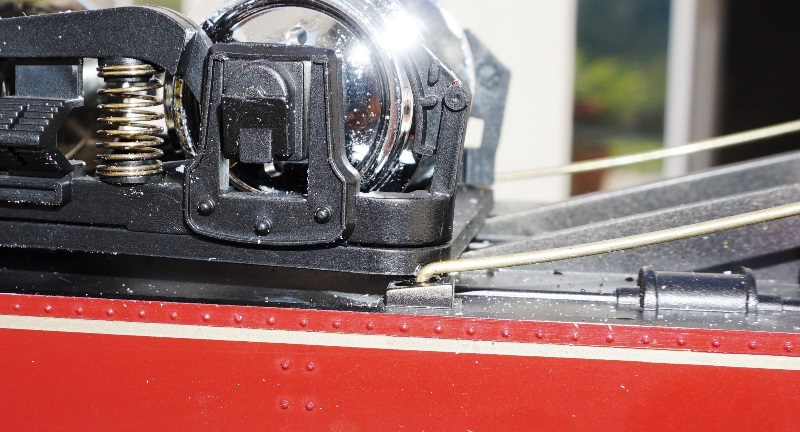 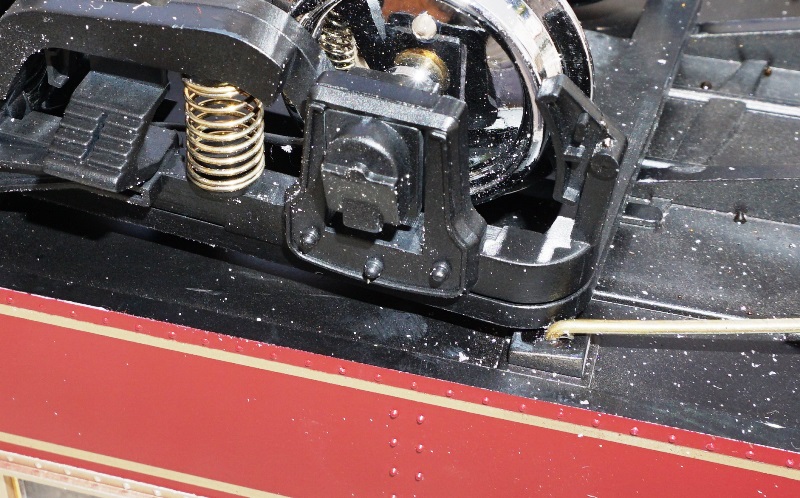 Much more clearance with the uneeded "blocks" ground off: 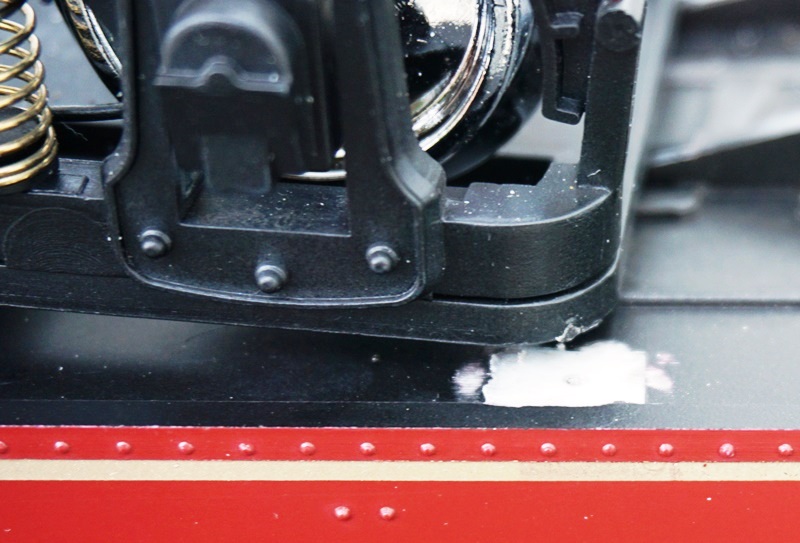 In the picture below, you can see how "tilted" the top of the truck is, which affects clearance, and worse, runs the suspension to extremes at both ends of the truck. Look closely, the right hand journal is all the way up in the truck sideframe (since it is taking the majority of the weight).

Similarly, the left hand journal is almost completely unloaded and is at the bottom of the journal "slot" in the sideframe.

Looks awful and cannot be using that sprung suspension well.

By placing a thin washer on the other post, the one in the curved slot on the chassis, the car weight is brough much closer to the center of the truck. Again, look closely, first, it's clear the truck is much closer to level. But notice there is space both above and below the journals in both end axles. This just must be better.

Below is the part number for the washer in Ace hardware, a thin nylon washer (I'll add the thickness, and the center hole needed to be enlarged a bit) 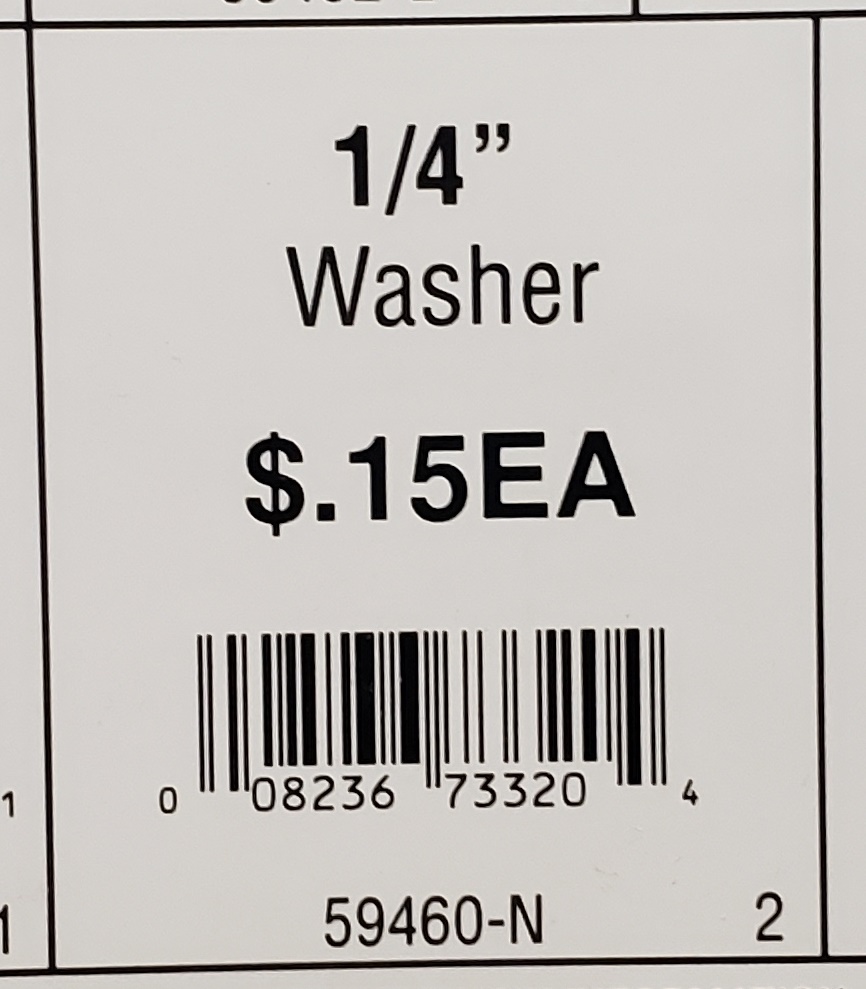 One final area of interference:

After all of this I was in pretty good shape, but still got an occasional derail. Looking closely, I saw that the truck frame, even though trimmed flush (removal of coupler tang) would hit the back of the Kadee shim block. I beveled the rear of the Kadee block 45 degrees and then lightly ground the underside of the truck frame to put a small chamfer on the sharp edges.

The picture below shows how the truck frame will go over the raised block. I'll add a better picture. 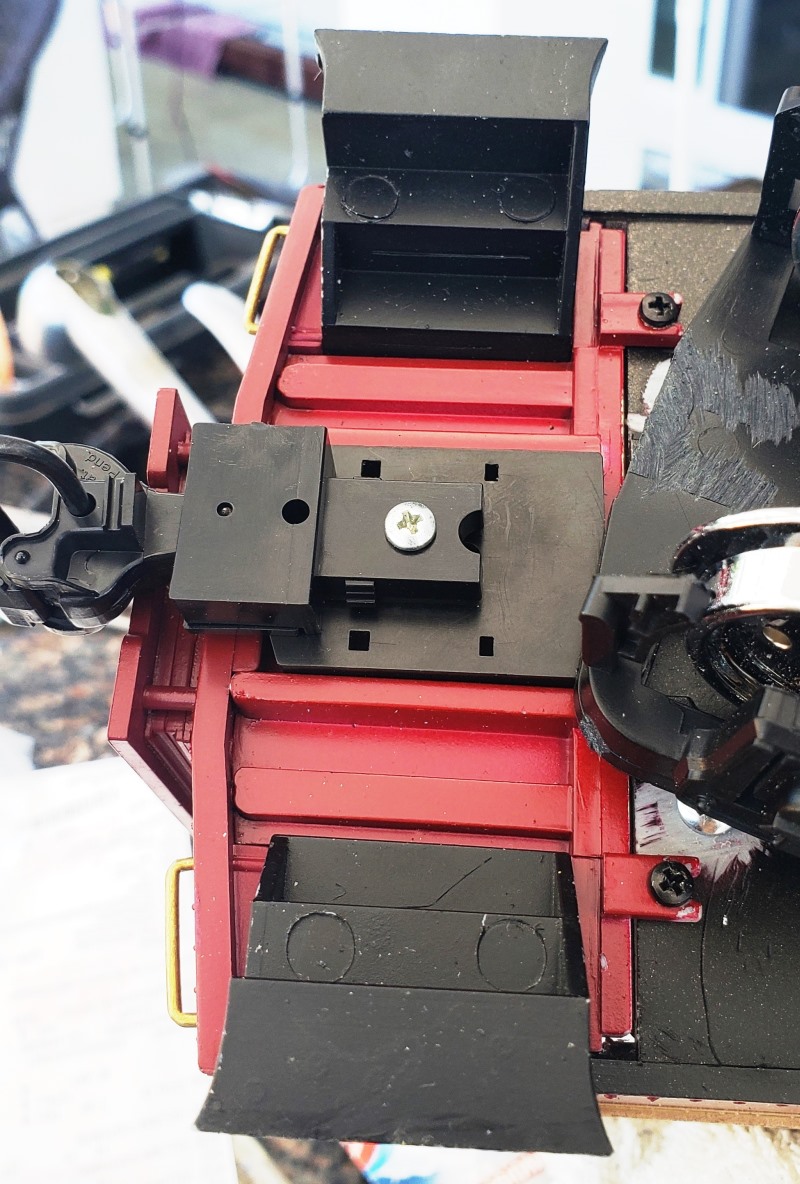