Adding Weight to the Aristo E8

This loco stock is very light. I did not record the weight of mine before I added the extra weight as in this page. Ted D. measured 9.4 pounds.

After several apparently not so happy experiences with shipping weights in the same box as the loco, and other issues, Aristo does not supply the weights for the E8 installed or for free, as opposed to previous locos. When the E8's first came out, there were no weights available.

After waiting about a year, They became available, but right around that time, the cost went nuts, and the offer of "free" weights like other locos (just pay $5 shipping per weight) went away. According to the Aristo in stock list as of 13 October 2008, 3 weights, part number ART-29517, are $30 (plus tax and shipping). This are zinc weights and weigh about 1 pound each, not the 2 pounds they used to be.

(By the way, the dash 9 weights and the E8 weights are the same, so if Aristo had told everyone this when the E8 came out, they could have bought the 2 pound lead weights immediately)

So, my choice is to pay a lot of money for weights 1/2 as heavy as they used to be, or do it myself. Well, I think that's an obvious no-brainer.

The original Dash 9 weights are about 1.92 pounds each. So maybe I could get about 6 pounds of lead shot into that big fuel tank. I removed the tank, and sure enough, it looks like a lot of room: 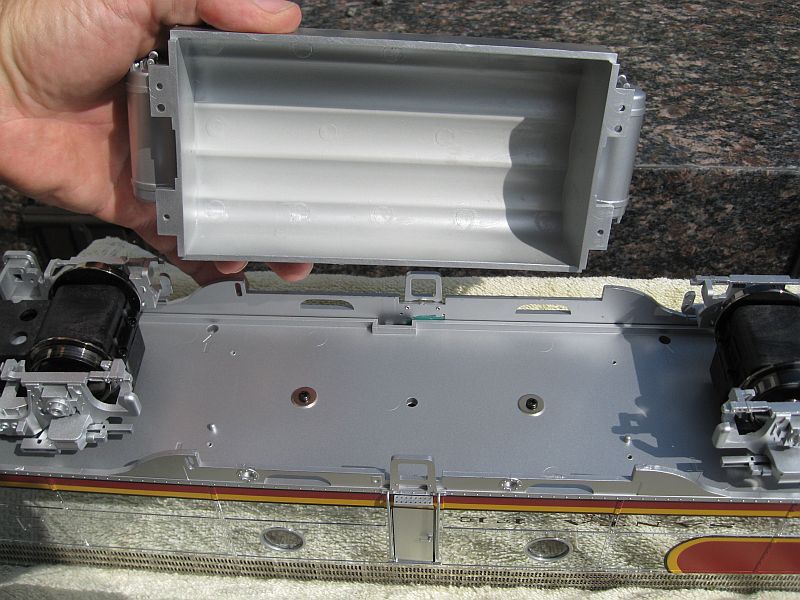 Ok, so I lined the tank with heavy aluminum foil, gently nudging it into the corners as not to tear it, then poured 6 pounds of lead shot, and a 1/3 Titebond II to 2/3 water mix into the shot. I used a toothpick with a blunt end to poke in the shot to work the air bubbles out. 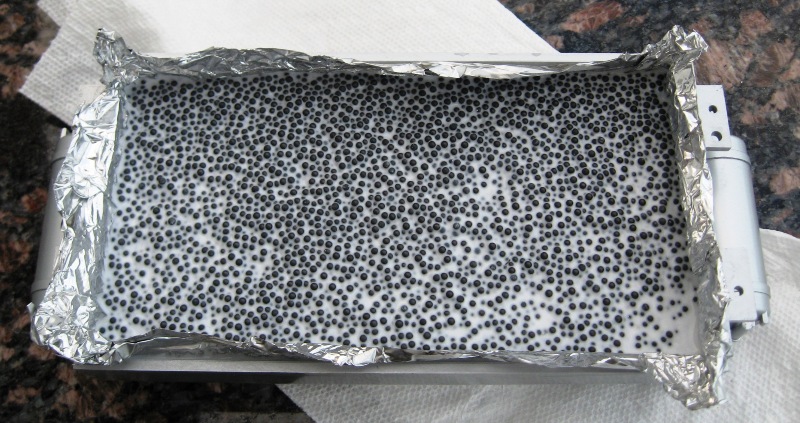 I have stainless steel rail, and a 3.4% grade about 40 feet long along my back fence. Before adding any weight, the E8 could pull 4 Aristo heavyweight cars up this grade, and just make 5 if I took a full speed run at it and there was a lot of wheelslip.

With the weight, the E8 now will pull 7 heavyweight cars up the same grade with no slipping, at any speed down to a crawl, and I can stop the train on the grade and start back up.

While the lead weights were available, they were pretty cheap, now they are 1 pound each, not 2 pounds and sometimes they are $10 each. So $30 for 3 pounds, or $6 for 6 pounds my way.