Santa Fe only had one of these, and the model has the correct road number. It's a good looking loco, with the standard Aristo "prime mover" gearbox system, except for new motors (more later).

But, after about a year of use, many people have reporting many different problems. The coupler problem was obvious right away. In early 2009, I noticed many posts about failing plating on the wheels. Since Aristo diesel wheels are steel, they will rust and pit quickly, bad power pickup.

In late 2009, there were several reports of the motors literally going up in smoke. The common symptom is the motors start drawing a lot more current than normal, and heat up and smoke. The evidence points to counterfeit motors with poor quality insulation on the motor windings, that is not the proper high temperature enamel, but a cheaper lookalike.

Ted has posted a video that shows one loco drawing 2 amps at 5 volts, and the loco is on rollers! (That is way too much).

Axel Tillman of Train-Li, whose motorized switch machine Aristo-Craft so blatantly copied, noticed this inferior insulation on the Aristo motor in their switch motor clone.

This is the first loco made for Aristo-Craft in the "new" Sanda Kan factory. (This was just before Kader bought Sanda Kan). I believe this is the reason for many of the flaws in this loco.

One small detail, there are 2 small holes above the couplers where the MU cable should emerge. The first run did not use these holes, the cable comes out underneath the shell. It's very common for it to drop down, and catch on parts of a switch and get torn off.

Quite a few people have reported couplers "coming apart" on the GP40 where the identical train on another Aristo-Craft loco is fine. It appears that the batch of couplers either have greater knuckle flex, or possibly the castings have "shrunk" more than usual. In any case it's true, and it's the couplers sliding apart sideways, not the knuckles popping open!

In late 2009, I started getting reports of the loco's "burning up". There's now many documented cases of the motors themselves drawing excessive current. In severe cases smoke has come from them.

It sounds like there may be a "lifetime" issues with these motors. Will keep you informed, but if you buy a used GP-40, be sure to watch out for this.

Subsequently, Aristo-Craft has publicly announced they have 1000 replacement motors in stock. Draw whatever inferences you want to, no one get's 1000 "spare" motors.

Be sure to read Ted's vignette on the motor problems and solutions: Ted's Vignette on GP 40 motors

Even though marked 2008 on the body shells, there seems to be a variation. The mu cables now come out of the holes in the body shell as it was obviously designed.

Also, the motors appear different. Ed Headington reports that a loco he purchased in December 2011, you no longer can see the cooling fan in the motor "vent hole". There are openings in the motors, but there is no fan visible. This may be a helpful spotting guide, I need more people to confirm these differences.

This loco has a ton of polyswitches. It appears that they are in the battery buss ("mu cable") and on the main board. If you run heavy loads, or use the mu cables to run more than one loco, you will most likely have to bypass these. As always try to protect from shorts. This means an intelligent rewire. In a perfect world, on each of the pickup wires from the trucks would be best, along with one of the leads to the main board, but it's your choice.

Here are some pictures of the circuit boards inside, courtesy of John Burden:

Below is the main board top, with the switches visible: Below is the same board, but from the underside, you can see the Aristo socket: (the dummy plug is still in the left hand socket) There are 2 more circuit boards, one in the front:
(notice the 4 pin plug on the right, that comes from the motor block) There is likewise another circuit board in the rear, see the picture below: The motor blocks have the 4 wire cable coming from them, as shown below: (following pictures courtesy of R.J. DeBerg) 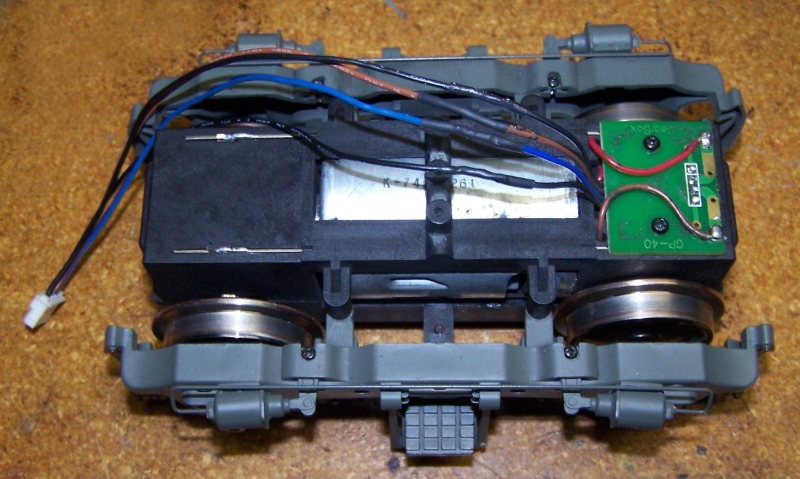 The 4 wire cable connects to a small pcb, unlike the 6 axle diesels. That pcb is wired to the motor, and gets the power pickup from pressing against the metal wires in the top of the motor block: 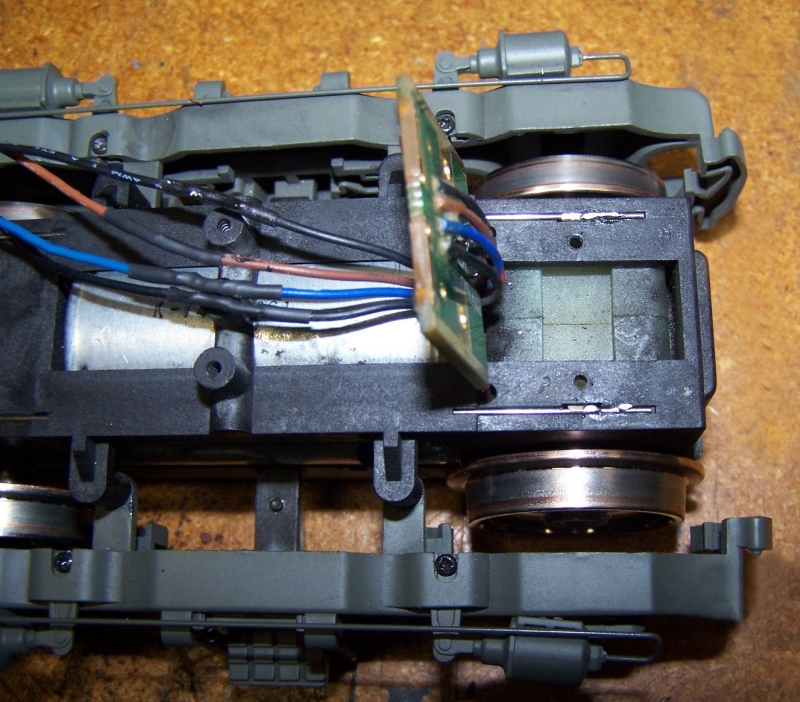 I don't think a lot of this connection to the power pickups, there is no spring contact to touch against the circuit board. It's wise to check your power pickup to each block when you get your GP40, you might only be picking up from a few "sides". A dab of grease in here will keep the connection better. Notice the metal "finger" on the bus wire, aligned with the axle? This is the metal strap that goes down inside the motor block to contact the gearbox. This is a potential source of problems. In the Aristo steamers, this connection is now soldered from the factory. If you solder this one though, you run the risk of interfering with the contact the circuit board makes. If you were careful, and made a nice smooth solder blob, it actually might help for 2 reasons, ensuring the metal clip is connected very well to the bus wire, and also providing a high point to better press against the circuit board.

The picture below is out of focus, but you can make out the part of the circuit board where the contact is made: 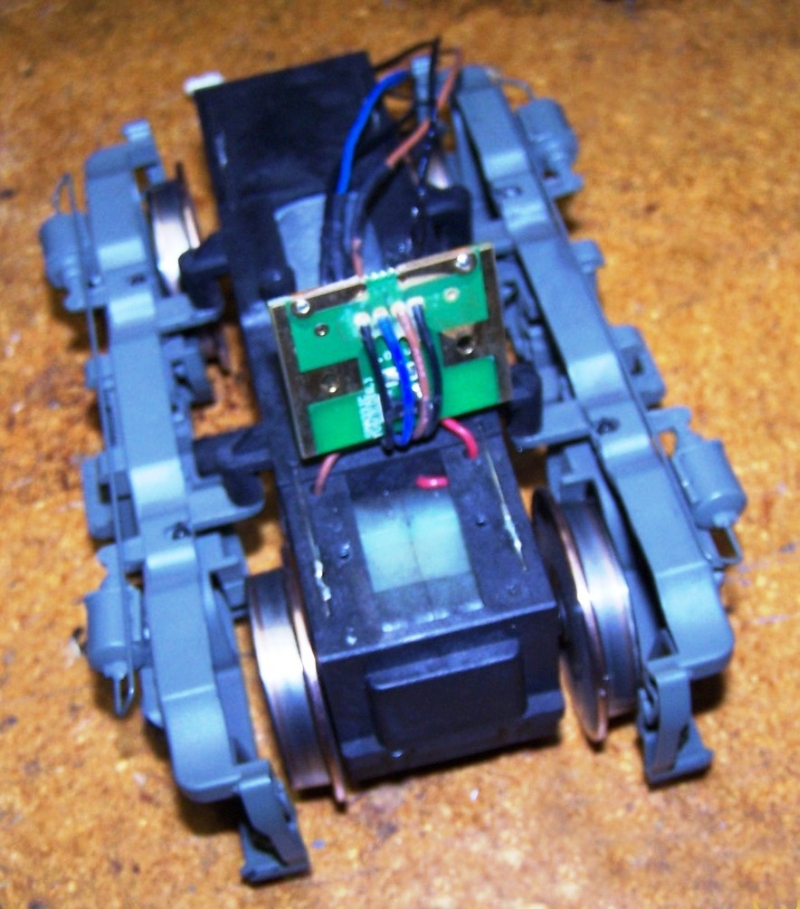 More on the motors:

Paul Norton, beloved "son" of Aristo even posted the problems he had on the Aristo site, and got replacement motors and they are slightly longer. This reinforces my "counterfeit motor" theory, and that Aristo was duped:  http://www.aristocraftforum.com/viewtopic.php?t=16598

"Well things did not go well. It turns out the new motor casings are 1/16 of an inch longer than the originals. The problem was solved by shaving the two small ridges off the back of the motor cavity in the first motor block. The motor now fit, but would rock sideways. The motor in the unmodified motor block was checked and it rocked, but not to the same degree. A couple of shims (0.030” thick, x .0.25” wide x 0.49” long) were glued to the front of the motor block cavity for the motor terminals to sit on."

The GP-40 reportedly uses a Mabuchi 545 motor with a fan, but other observations indicate the logo on the stock motors looks "funny".

Even though the Kadee site gives different recommendations, I suggest that you read Ted's vignette for installation, and a better solution in my opinion.

Many people have commented on the poor quality of the wheel plating. Since the underlying metal is steel, pitting and rust can be a big problem on track power and/or moist climates. Some reports have had the plating come off in as little as 5 hours. This is probably another problem with the "new" Sanda Kan factory.