Couplers, Which to use? How do they perform? What choices are there?

When I first got a loop of track up, I tried to run a train... I had a USA F3 A & B, a Bachman Shay, a USA Trains ribbed streamliner car, an Aristo box car, and some old Bachman cars.

Oops, 3 different kinds of couplers.... nothing hooked up to anything!

Every person new to G scale finds this out right away!

OK take the weird loop things off the F3 and put the supplied knuckles on it... whoops, the Aristo knuckles and the USA ones don't mate... stuff is at different heights, the loops look like toys, and I got a look at VERY large LGB knuckle couplers. What the heck?

The hook and loops were out for me, for many reasons, one is that they are butt-ugly!

So, all knuckles, which to choose. Whoo boy! Everyone has an opinion, this is better, that is better. No simple answer collecting opinions.

But, looking a little closer, this is just like the early days of other scales, only one company makes conversion kits and has magnetic uncoupling. So, I said  the heck with it, no one will ever agree, and Kadees worked in every other scale I was in.

For me, who wants reliability and wanted to run long trains and have remote uncoupling, there's really no other answer, and I'm glad of my decision, but below is a discussion that may help you if you REALLY want to agonize over the decision ha ha!

Note: 10 years later, most people have standardized on Kadees.

This is the "standard" coupler for "G scale".

They are big, ugly, look nothing like the prototype, and cheap, since they are almost always provided.

There are remote uncoupling ramps, I only know of the one from LGB. It sort of works, and is iffy outside.

They have a hook on at least one car in addition to the loop. You can have hooks on both cars too. They are pretty darn reliable when "double hooked", but ugh!

When you "double hook" it's almost impossible to get cars back apart, since you have to "depress" BOTH hooks at the same time.

Aristo H&L do not work with the LGB uncoupler, due to the narrow design of the end of the hook. You can drill the end and put a pin in it to make it wider (tip from Dan Pierce). The Bachmann, USAT, HLW, Playmobil, and of course LGB all work fine since they have a "T" shaped end.

The advantages are rugged, resistant to uncoupling, handle rough track, and can work on very tight curves.

The disadvantages are pretty much huge, ugly, using double hooks can cause derailing problems, hard to take apart, and not all brands work well together.

LGB is supposedly bringing out a more compact design in 2017-2018, will have to check it out. Use these if you have all LGB and can't spend any money (which is an oxymoron!) or you have really crappy track or really tight turns.

Aristo-Craft has made several versions of it's knuckle coupler. The latest incarnation has an extra "shelf" under the knuckle which effectively keeps couplers from riding up over each other under tension. (as long as BOTH couplers have them!)

Even within the "shelf" type there seems to be an older one, that says "ARR" on top of most of them, the newest type say "ART-B". There is a difference in the thickness of the knuckle and these two different types do not mate perfectly, you will notice this by being harder to couple.

The shelf is great for long trains, or uneven trackwork though, since the couplers cannot override each other.

Supposedly, you can use the LGB uncoupling ramp, but many people say it does not work. There is a manual one which is ok for outside, and a remote one, which is not weatherproof.

These were an OK coupler to standardize on if you didnt't need remote uncoupling. I would say good, but late in Aristo history, the coupler quality got spotty, and the couplers pull apart more often. Often you have to really bang cars together to get them to couple. They will age and get less reliable as they get older.

They work ok with Kadees, i.e. they will stay coupled, and will sometimes automatically couple.

The down side is even with ones in good condition, you have to bang the cars together to couple them. To uncouple, you cannot lift one car out, since the "chin plate" will stop this, you must manually trigger the uncoupler, and make some space between adjacent cars.

Since Aristo is gone, I would not recommend these, change them out. 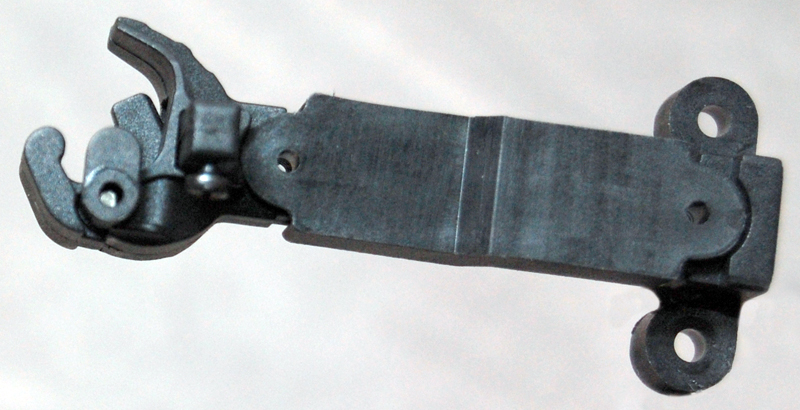 This was an abortion. Lewis polk stated in his forum could possiby become the new standard. Hahahaha. The first ones even had the knuckle opening the wrong way:

(From Dave Winter, 11/25, Aristo forum)
Re: Your statement that your new coupler "will not" mate with a Kadee product.

Surely this must be a misprint. Any body mounted coupler that looks and works similar to a 1:1 coupler, and is mounted at the right height, should automatically couple with a Kadee product. No problems. Unless the knuckles are facing the other way of course....???

Whatever the outcome of your experiment it's good news of a sort. Uncoupling was never a problem for me. I spent 8 years converting everything I bought to Aristo couplers before I got tired of having to smash the cars together with such force that the paint fell off. A good coupler latches without even causing the second car to move.

Yes, it opens in the opposite direction, but does match our regular coupler. So..neither one matched the other brand anyway. As I said, we were not looking to knock it off, but create a new concept.

All the best,
Lewis Polk

Yeah, seems like a mean jab to a company that went bankrupt, but the arrogance just plain unbelievable attitude endured by people like me is finally gone but not forgotton. This is what arrogance gets you, bankruptcy and retirement.

These are just OK in my opinion. I don't have a lot of experience using them long term. I have about 50 USAT cars, and I converted them all to Kadee right away. Most people who standardize on them have bought mostly USAT cars. Most reports are that they work well enough, you need to operate them manually. They do not work super well with other knuckle couplers. They seem to "age" well. I found the mechanism to be sometimes "sticky" and the big problem is that they are not at the "standard" height that other manufacturers seem to follow (the Kadee gauge). The metal parts seem to stick in the plastic parts. Just not reliable and when they did not couple well with others, I 86'd them.

No reliable remote uncoupling either.

LGB makes knuckle couplers, they are huge and the knuckle "head" swivels. Really not popular with anyone. Most LGB people stay with the 4' diameter toy like curves and need the hook and loops.

AML is a relative newcomer, making beautifully scaled and detailed rolling stock, and supplies a body mount and truck mount knuckle that works ok, but has pretty much the same problems as the USAT ones, the metal drop link sticks and does not function reliably. But they aren't too bad, but you might as well go Kadee if you standardize, more options, more draft gear, and AML parts availability is iffy.

Saving the best for last.

If you are going to standardize, or if you want remote uncoupling, this is for you. A very large selection of couplers, custom conversion kits for difficult locomotives, and the famous Kadee delayed uncoupling.

The downsides of Kadees are that you need to get coupler height spot on for best operation. Also, under tension, due to the molding relief on the inside of the knuckle, the couplers can ride over each other and come apart.

These issues can be minimized and/or completely eliminated by:

My opinion is to go to body mounts for 8 foot or greater curves if you have 40 or 50 foot cars. Longer cars will want larger curves. The standard body mount coupler is the 906/830.

Body mounting on locomotives is very helpful also, no sweat on a steam tender, but on long diesels it can be a problem with sharp curves. You can make the car right after the diesel have a coupler with more swing, see the Kadee kits.

There are 2 different sizes, "G" scale and #1 scale. Virtually all cars that have the Kadee body mount already are at the right height for the G scale. You will have to shim the coupler for the #1 scale.

Many people have reported and complained about the coupler trip pin. The standard height for this pin is 1/8" above the rails. I will tell this to anyone's face, if your trip pin hits the rails, you did a lousy job of mounting the coupler or your trackwork is terrible. I submit that fixing your installation and/or trackwork will improve many other things besides coupler problems.

Get the Kadee height gauge, it's cheap, and will make your trains a lot more fun to run.

In late 2009 Kadee announced and shipped a new style coupler, which looks more realistic, better hides the knuckle return spring. The knuckle now pivots at a different point. I have done preliminary testing with a 50 car freight, all locos on the front, up my 3.4% grade with not problems. I'm impressed so far, in the process of retrofitting all my rolling stock (just because they look better)

Kadee has also come out with a servo operated coupler, basically a small R/C servo with a small chain between the servo arm and the coupler knuckle. Works well, too expensive especially with their goofy remote.

But you can mount a servo yourself and if you are DCC like me, many DCC decoders have a servo output. So all it costs you is a $5 servo and time to mount.