Illustrated below is an example 1/29 "G" scale early version Aristo-Craft Southern Pacific RS-3 that has been refitted with ball bearing motor blocks that affords adding more weight. The loco already was equipped with centerset Kadee couplers. 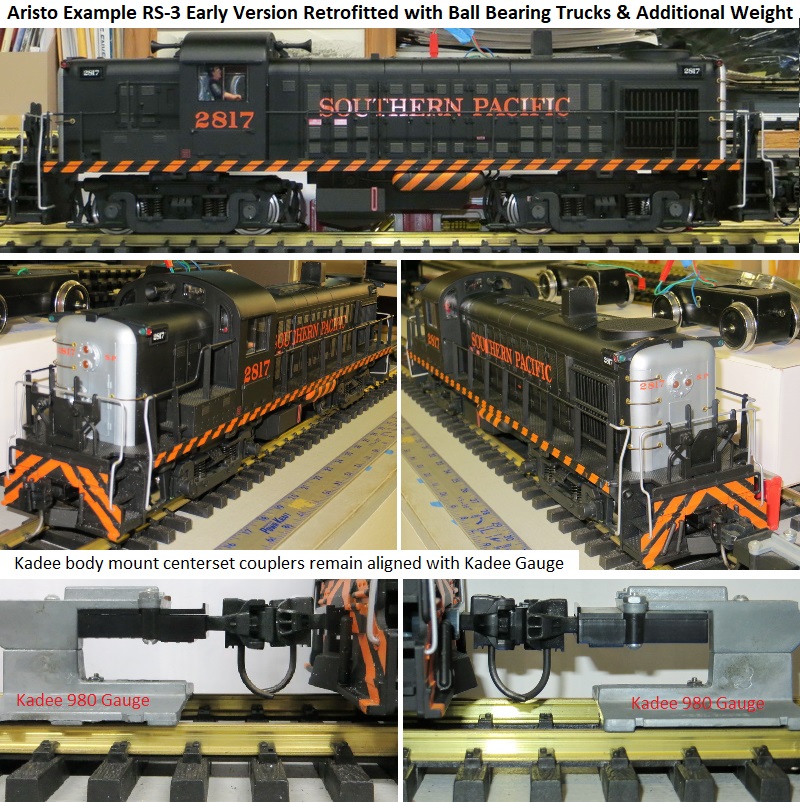 Though an Aristo RS-3 will be exemplified, other Aristo locos that use the same motor block will employ the same techniques since the blocks and "A" frames they mount to are the same - albeit with differing interface wiring. For example, the later version FA1/FB1 having factory ball bearing motor blocks is illustrated below. 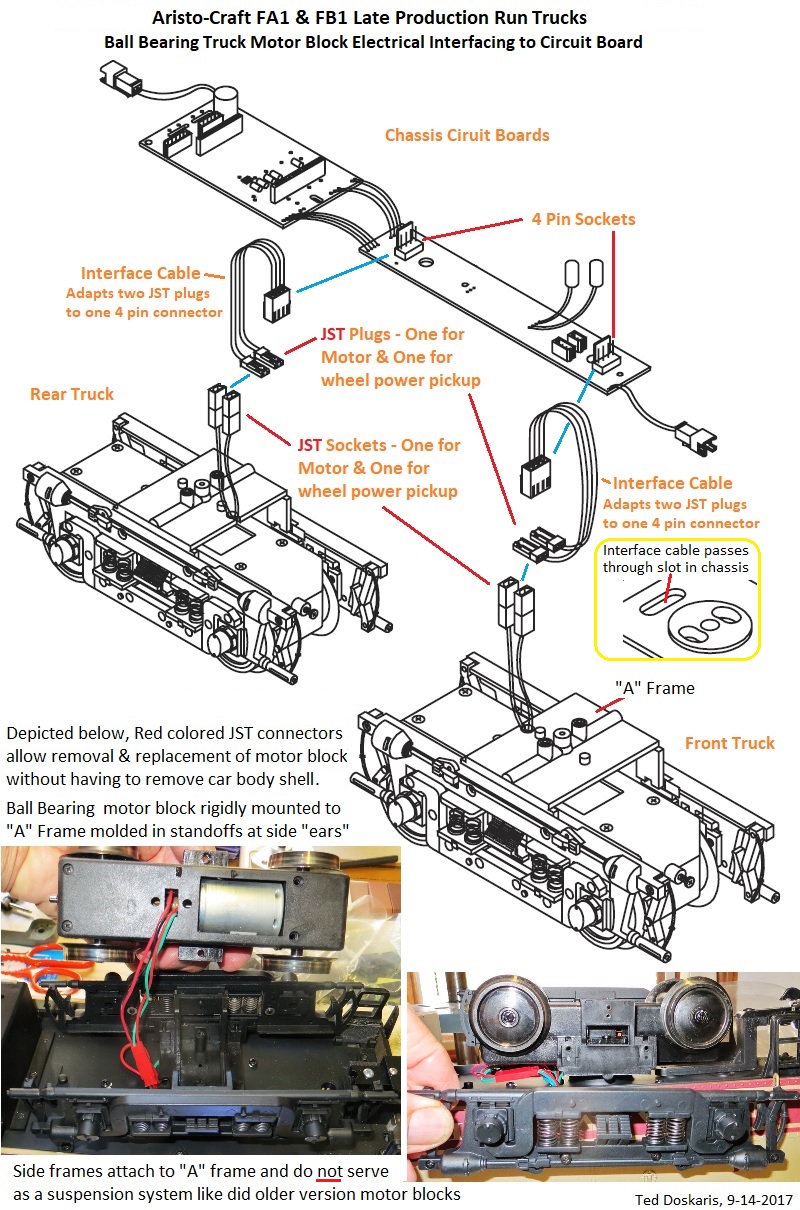 Tasks involved to retrofit the ball bearing motor blocks include the following:
(1) Loco disassembly to remove "A" frames
Also, to gain access to electrical connectors that may be inaccessible and when adding more weights
(2) Fabricating and installing spacers within the "A" frame for mounting the motor block
(3) Mounting Motor Block
(4) Sideframe changes
(5) Interface wiring changes (very likely, depending on loco model or production date)
(6) Adding more weights (optional, but recommended)
Includes ancillary modifications to accept weights
(7) Operational pretesting
(8) Reassembly of loco

The loco car body shell is to be separated from the chassis to gain access for removing each truck that includes its "A" frame and motor block. Interface wiring changes, also, necessitates internal access.

Sideframe R&R
To further elaborate, Illustrated below is how a sideframe attaches to the "A" frame. 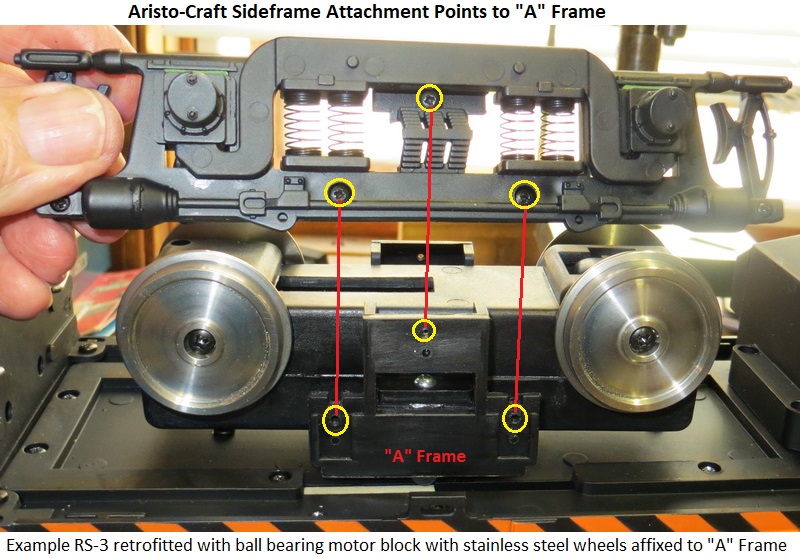 Illustrated below is an early version sleeve bearing type motor block. This type block has wheels with axle tips that project into the sideframe's journal box brass bushings that include eyelets for electrical pickups. The journal boxes are sprung with respect to the rest of the sideframe that is affixed to the "A" frame, thus, the loco is suspended with springs. 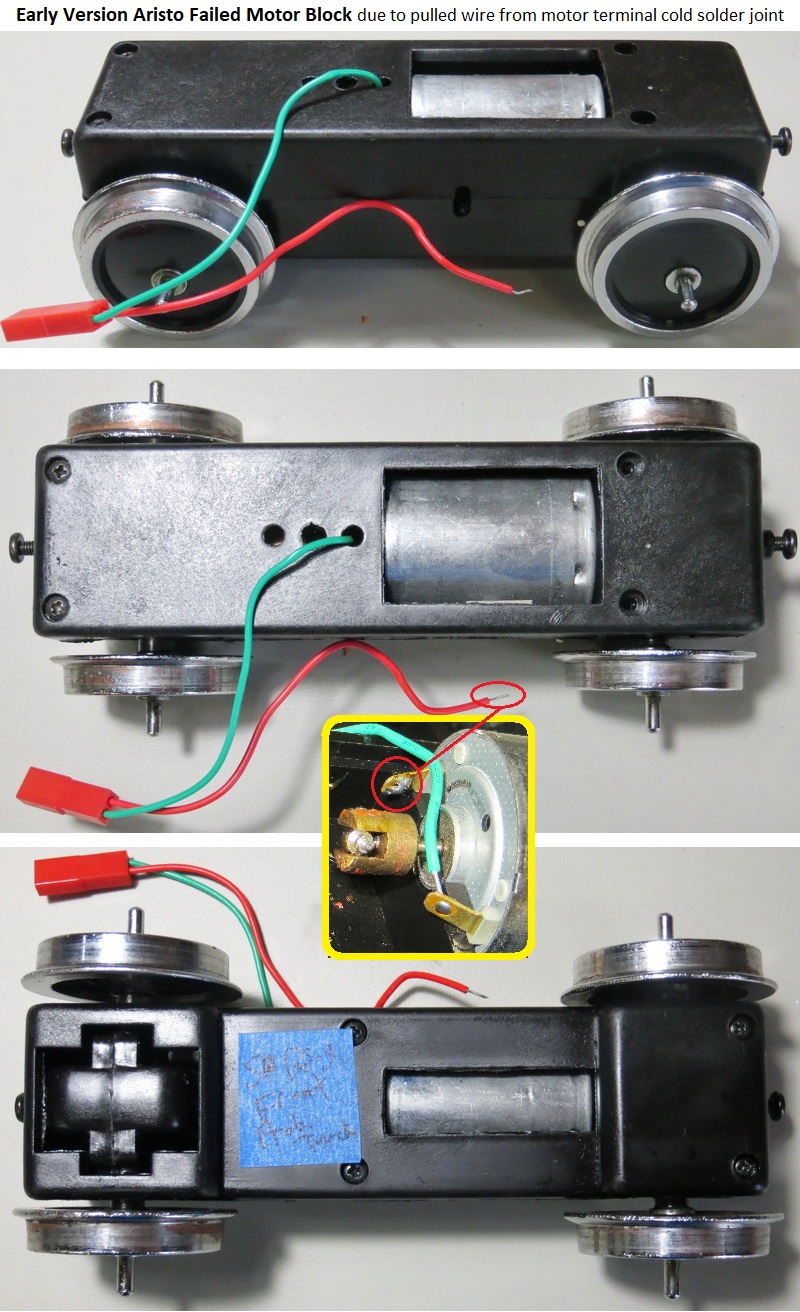 Since newer ball bearing motor blocks are rigidly fixed to the "A" frame, the early version sideframes are to be "dressed" to accept them as illustrated below.

Illustrations to follow are of the ball bearing type motor blocks.

Aristo-Craft and its successor company, PolksGeneratioNext, are no longer in business; however, the Bachmann company now markets a readily available replacement 2 axle ball bearing type motor block. This block is used in the Bachmann EggLiner which is a resurrected former Aristo product. 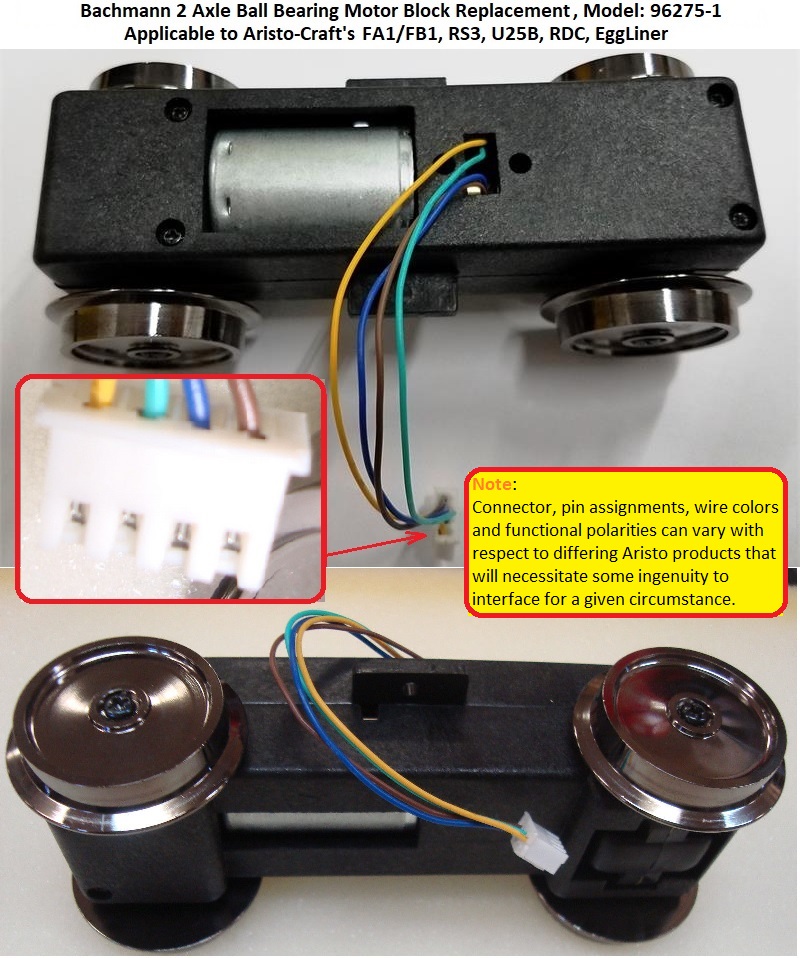 Attention: The ball bearing motor block used for retrofit described herein is an Aristo product having stainless steel wheels with reduced (0.080 inch) flange depth. Since I already have several of these stockpiled, I could not justify purchasing the Bachmann motor block at this time. That said, the blocks are virtually the same except for wheels and electrical connectors, and as such, the methods for fitment are the same as described in this article.

Whilst Bachmann Eggliners that use these motor blocks are shown in the Bachmman catalog, the blocks are not. None-the-less, Individual Motor Blocks (part number, BAC 96275SP) have been available through RLD Hobbies. 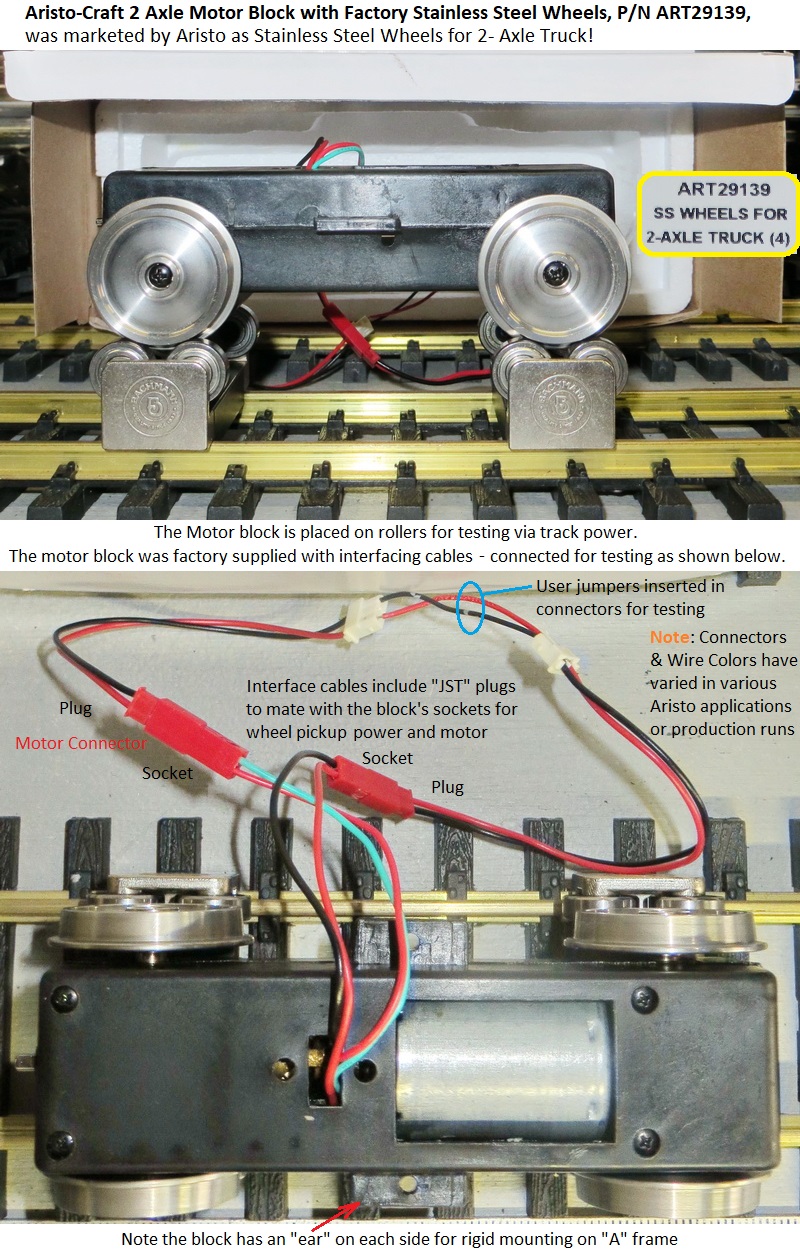 The motor block mounts on the "A" frame that, in turn, attaches to the loco's chassis.
The ball bearing motor block having side ears (not present on the sleeve bearing blocks) mounts within an "A" frame on molded-in stand-off posts that do not exist on the old version "A" frame.
Illustrated below is the newer "A" frame having stand-offs.

The "A" frame used for the old version sleeve bearing motor blocks can be upgraded to accept the ball bearing motor blocks in different ways. For example, stand-offs could be employed to emulate the newer factory "A" frame.
I chose to fabricate rectangular shaped spacer blocks that fasten at the sides within the "A" frame because this avoids removing material from the "A" frame's pivot ridge in which a screw would have to be used to hold a stand-off post.
Moreover, the flat surface of a spacer block that mates to the newer motor block side ears ensures a more likely leveling of the block with respect to the "A" frame, which in turn, assures a better sideframe attitude with the axle centers since the sideframes no longer physically connect to and support the ball bearing type motor block.

"A" Frame Spacer Block Dimensions
Illustrated below are dimensions of the spacer block (2 needed to upgrade each old version "A" frame). 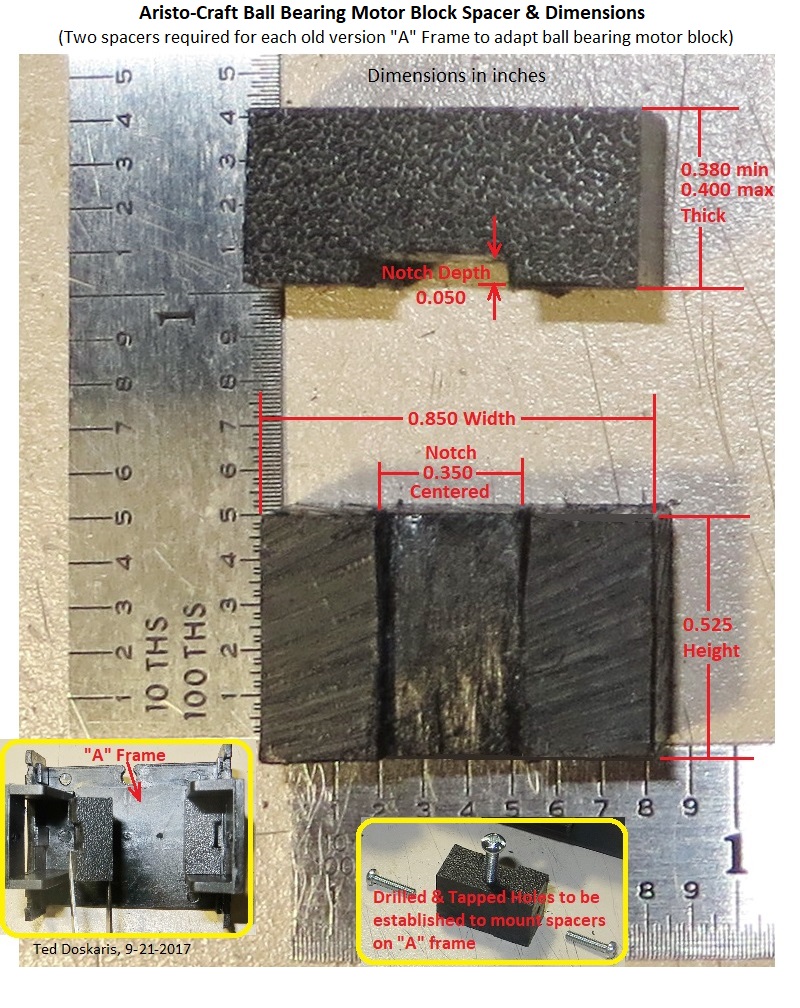 Note: A 3-D printed version of this spacer block is now available through Colin Camarillo. Contact Colin at and specify quantities needed.

Sideframe Drilling Template
Each spacer block is to be inserted into the "A" frame at its side crevasse. To make for consistency, I chose to use a template for establishing the holes to be drilled for screws that will be used for attaching the spacers.

Method for Drilling "A" frame & Spacer
Illustrated below are techniques used for preparing the early version "A" frame.

Note: Once the motor block mounting ear hole is established in a spacer, its location could be measured and replicated to mass produce future spacers. 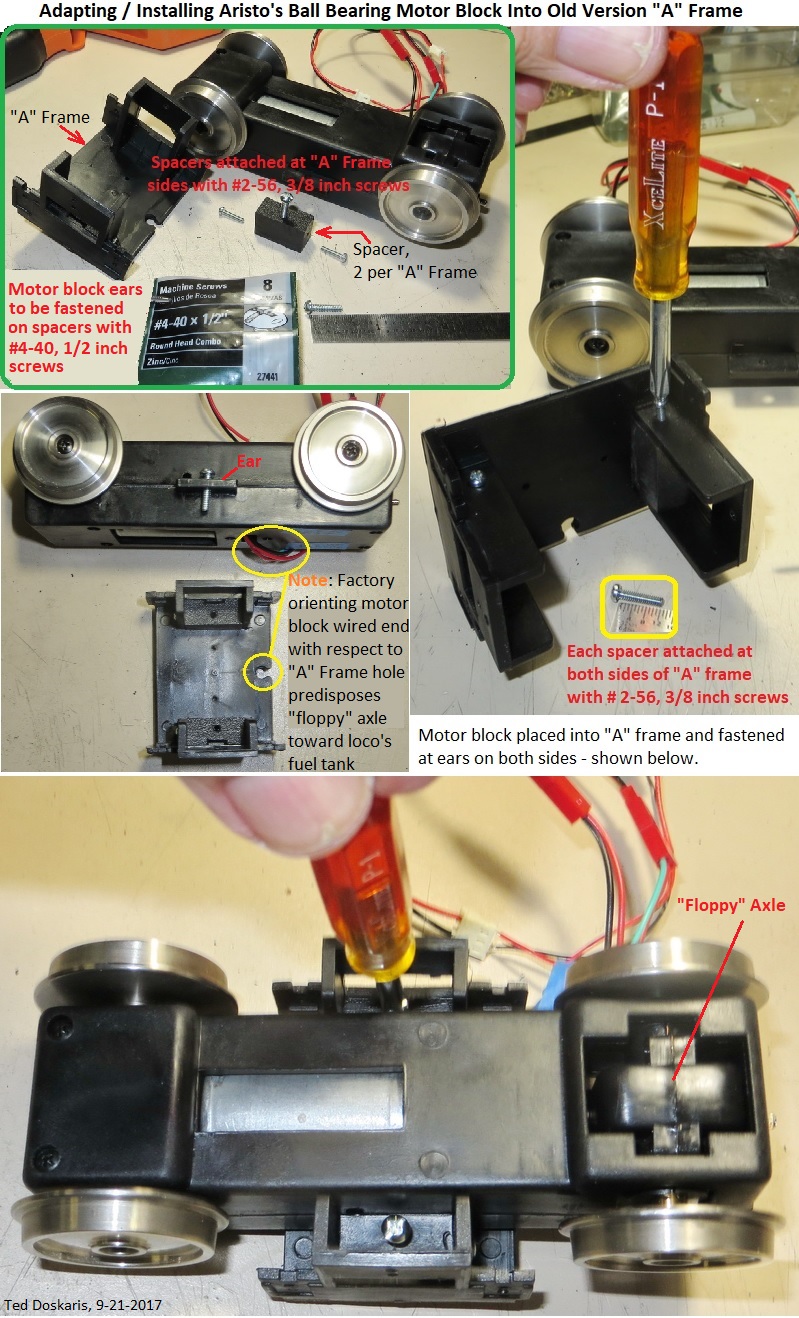 The currently available Bachmann motor block has one single 4 pin connector that appears to be suitable for directly plugging into the circuit board for power distribution within the loco for the FA1/FA1 loco and possible others.

The ball bearing motor block used in this example is the Aristo ART-29139 with stainless steel wheels.
This block includes two 2 pin "JST" red colored receptacles and interface cables that can be jumpered together to operationally test the block - illustrated below on rollers.

Since this motor block includes interface cables, these can be modified to interface the motor block for the early version RS-3 to its power distribution board housed within the chassis. However, longer aftermarket cables with slightly larger wire diameter would be preferable - illustrated below. 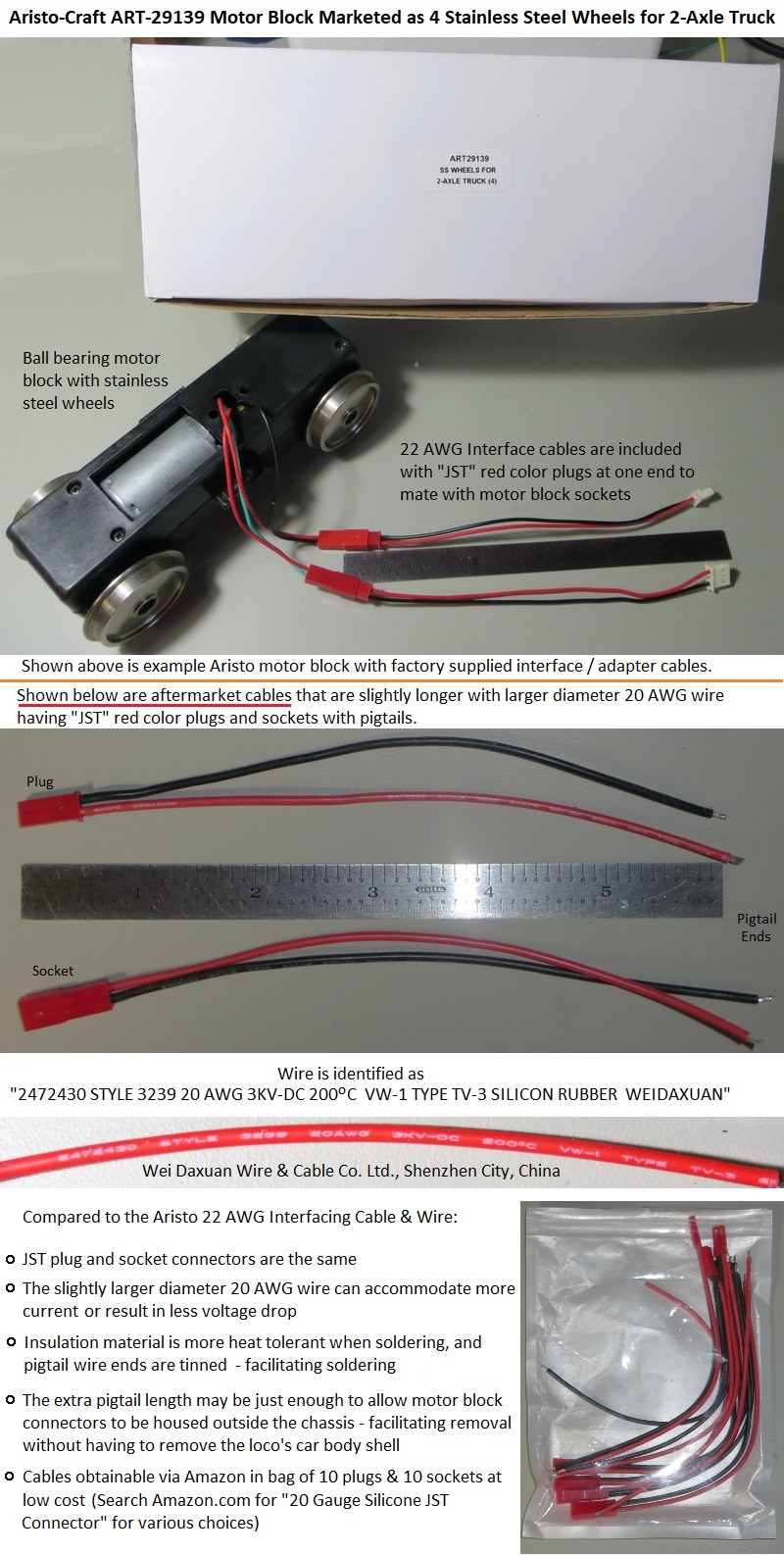 The example RS-3 utilized the interface cables supplied with the motor block. Interfacing must take into account connector and polarity issues. There are different possible ways to address this. The method used in this example is described with power distribution board removed as illustrated below. 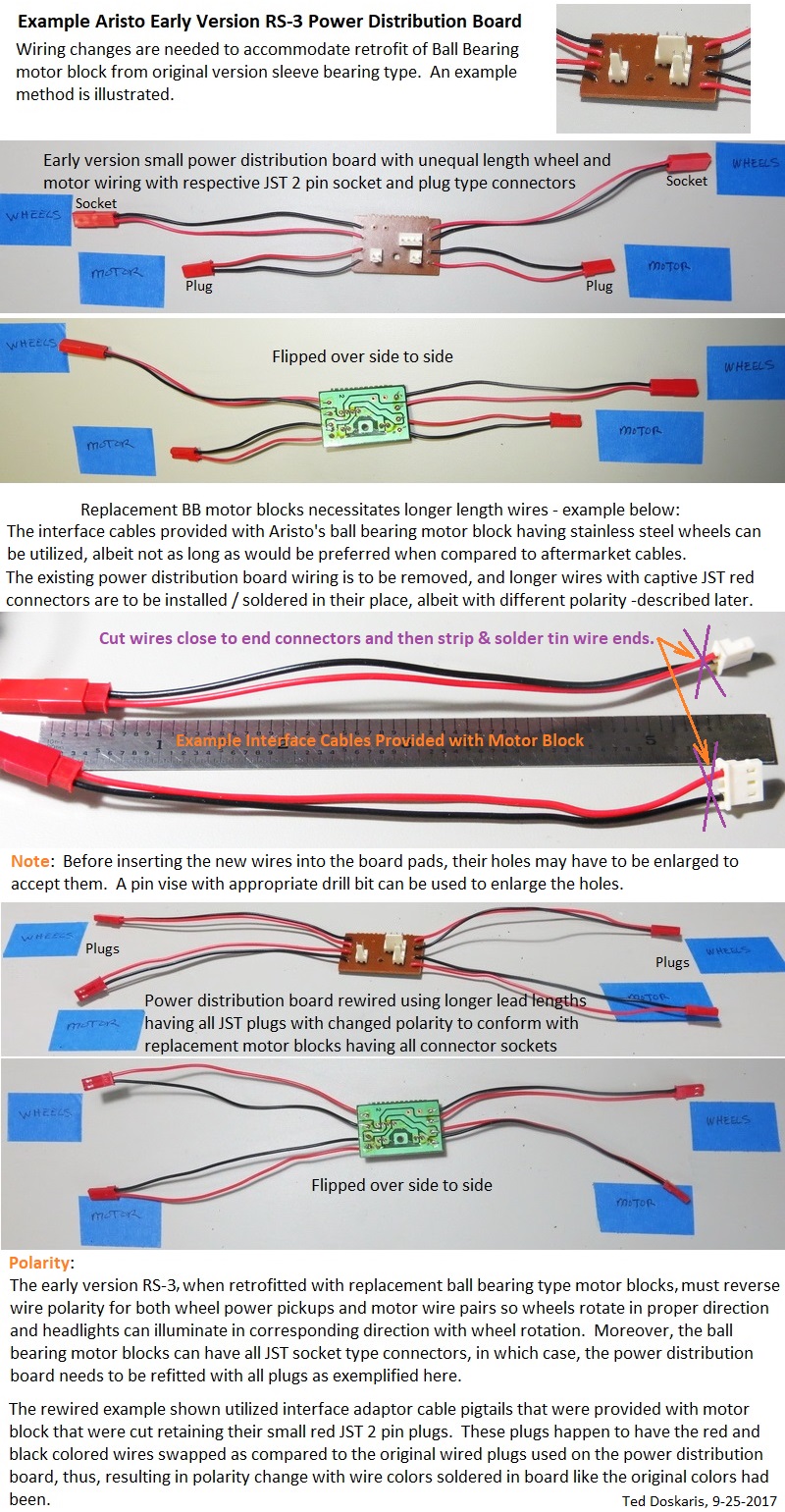 Note: Wire Routing from motor blocks to within the loco is illustrated at the end of the following section about adding more weight to the RS-3..

The Aristo-Craft late production RS-3 with ball bearing motor blocks is factory weighted to 9.35 pounds. Illustrated below is a Rock Island RS-3. 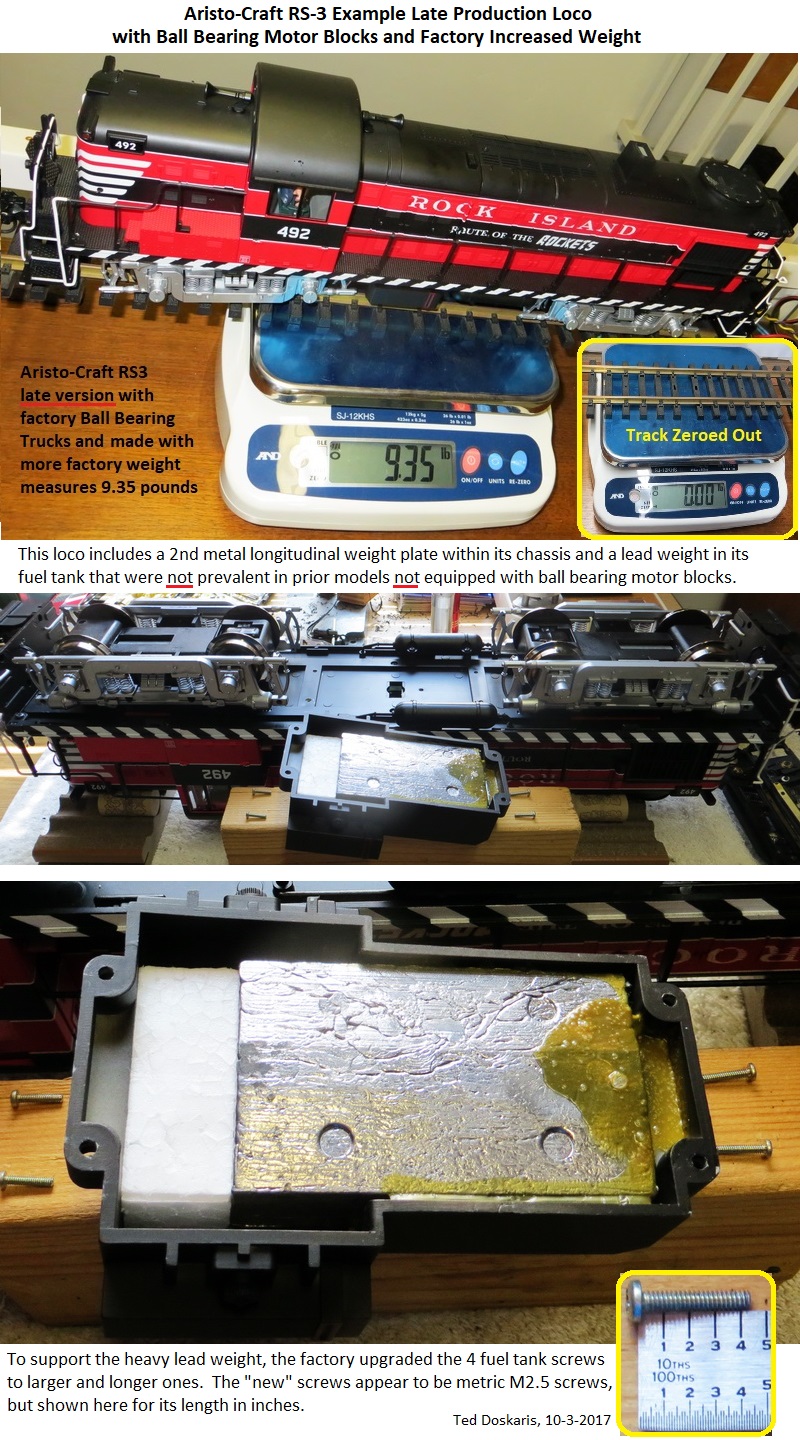 The example Southern Pacific RS-3 will be brought up to this amount of weight.

The example RS-3 had been previously equipped with a small amount of additional weight that occupied space within the fuel tank but supported by being toggle bolted to the chassis. This is described in vignette, "Aristo RS3 Loco Weights". 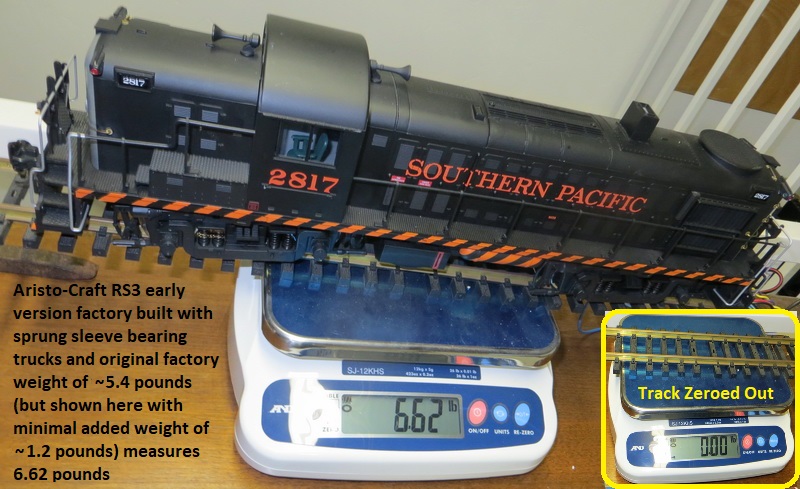 Since the example loco is now to be equipped with ball bearing motor blocks, more weight can be added. The factory weight used in the RS-3 is a long metal plate nestled between "rails" within the plastic chassis. The plastic chassis is somewhat flexible, so the metal weight serves to stiffen it, too.

An additional weight plate can be added as done in the example. Since even more weight will be added to the fuel tank, the long weight plate/s must be notched to clear larger, longer screws that necessitate holding the heaver tank to the chassis. If this is not done, installing the bigger screw will strip out the plastic when attempting to thread it. 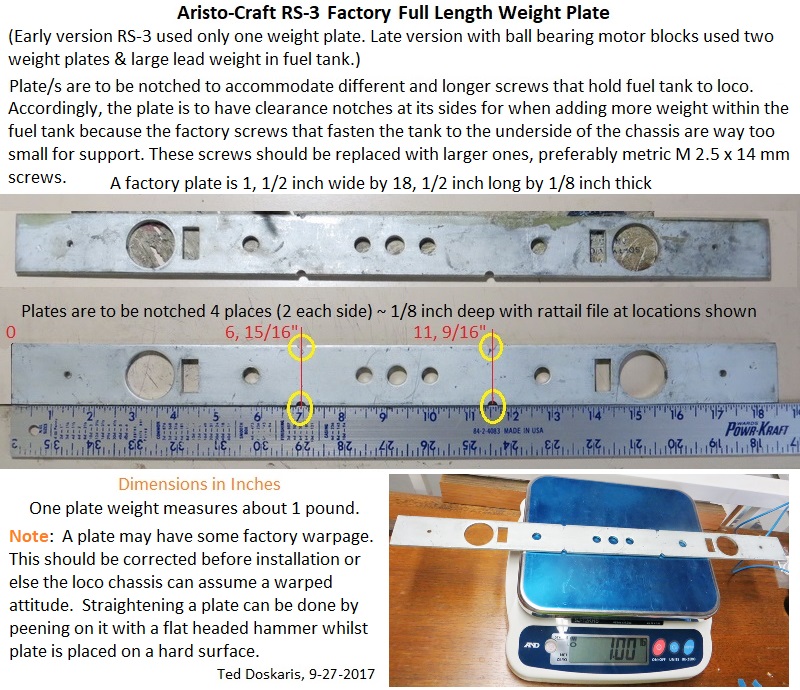 Since Aristo is out of business, the long weight plate is no longer available. In this example, readily available Simpson brand square shaped foundation washer plates that were obtained from building supply store, Home Depot, were used, too.

Illustrated below is where and how weights are installed.

Illustrated below is specific to the cab to accommodate the Simpson plate. 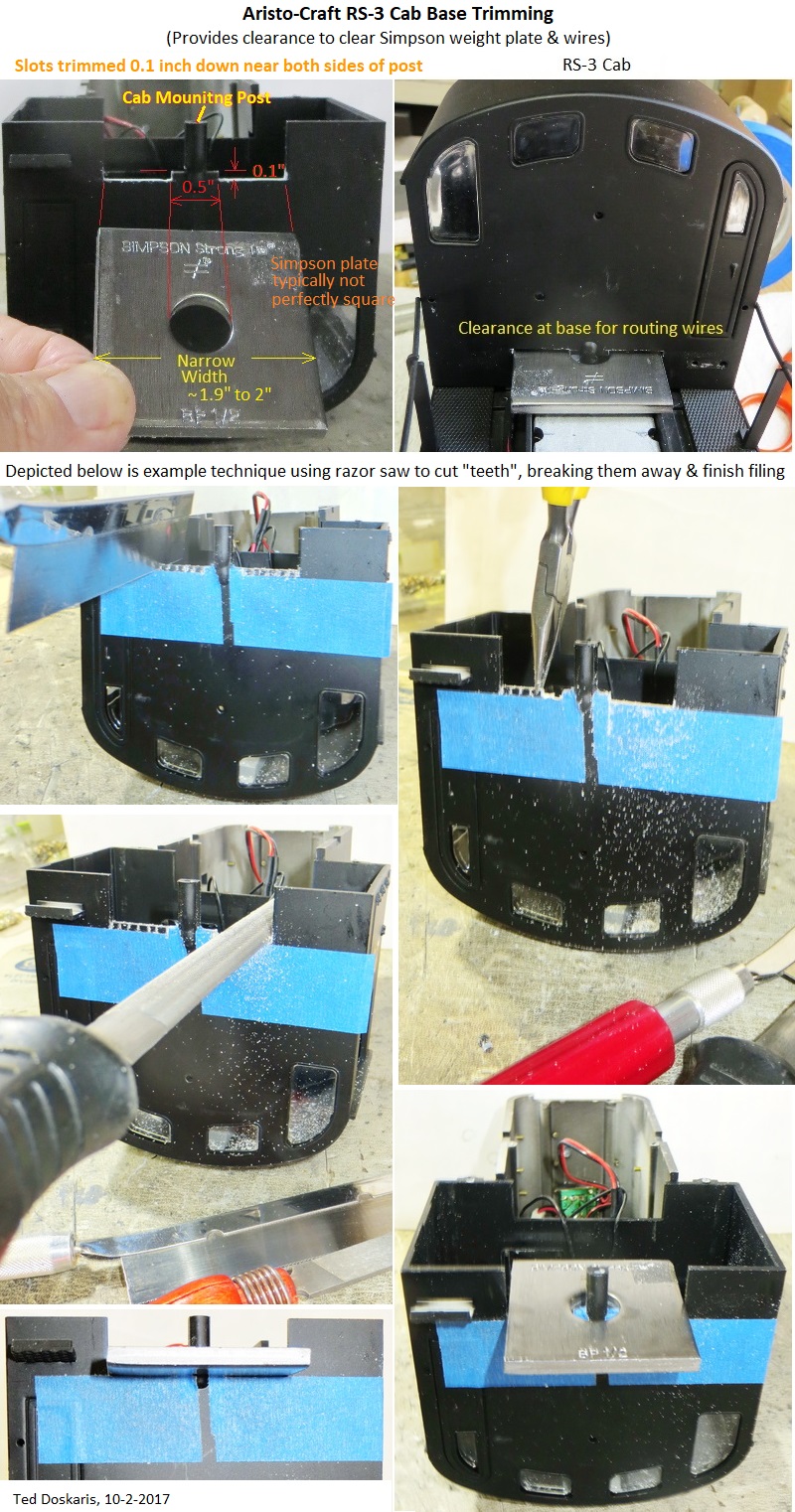 Illustrated below is specific to the fuel tank to accommodate the extra weight it must support.

With more weights space is limited, so care must be taken when routing motor block interface and other wires within the confines of the chassis. This is illustrated below. 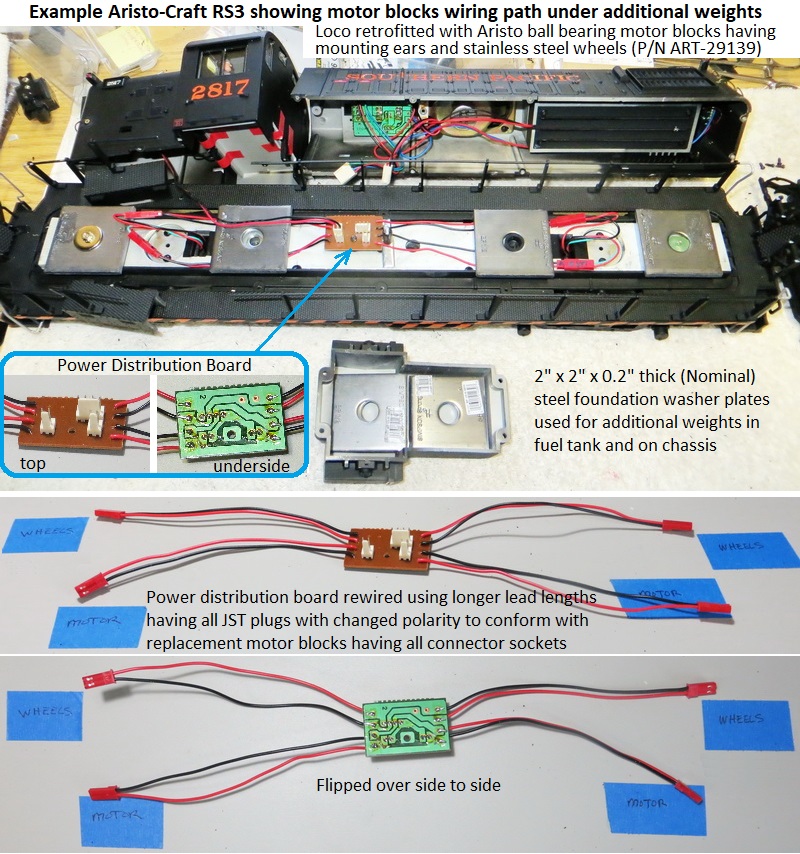 Engineer Orientation
Most prototype ALCO RS-3 locos have the engineer and control stand facing long hood forward; however, some production run Aristo RS-3s were the opposite. If so desired, the engineer with control stand can be reoriented as illustrated below. 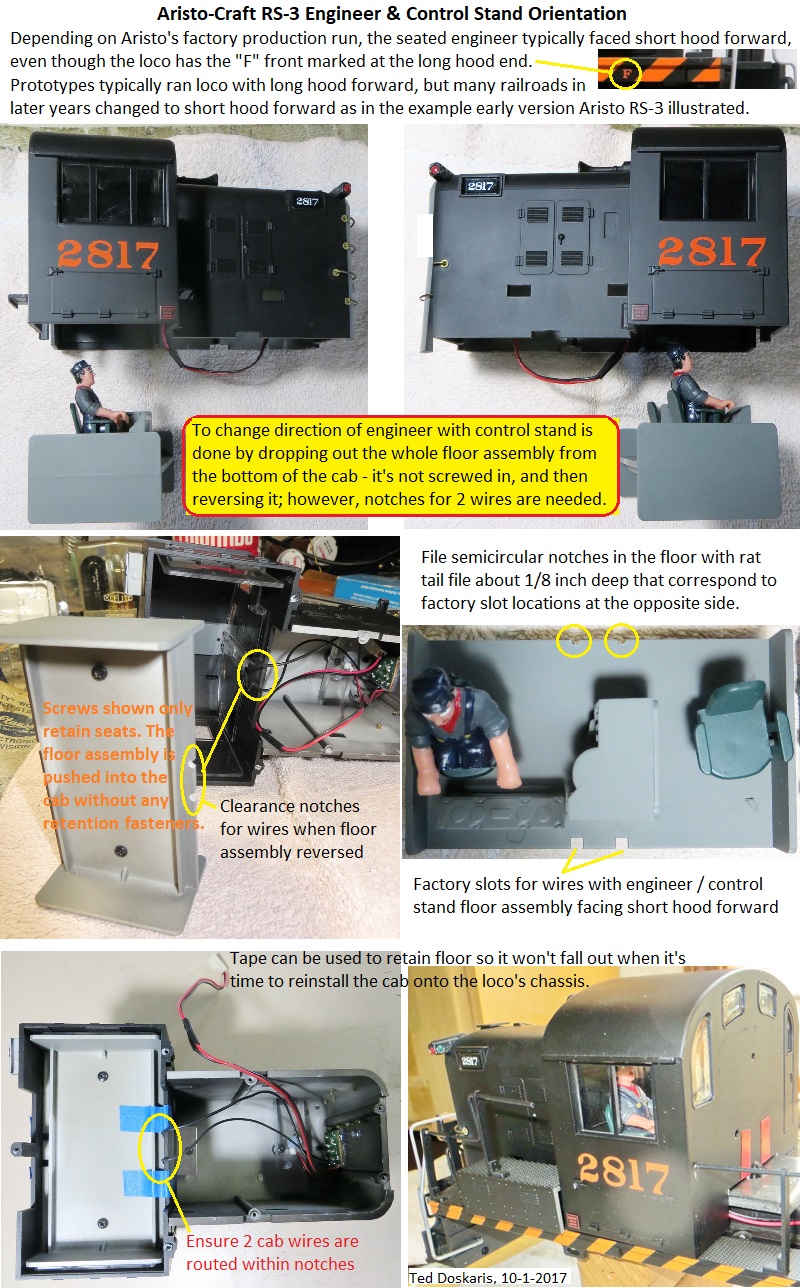 Having added weights (optional) and routing wires so they won't be pinched, the loco is reassembled in the reverse order it was dissembled as previously described in section, Disassembly - Reassembly.

Removable Components
During handling of the loco, the smoke module and switch cover may have been removed or come loose. When reassembling the loco, ensure these items are properly installed as illustrated below. 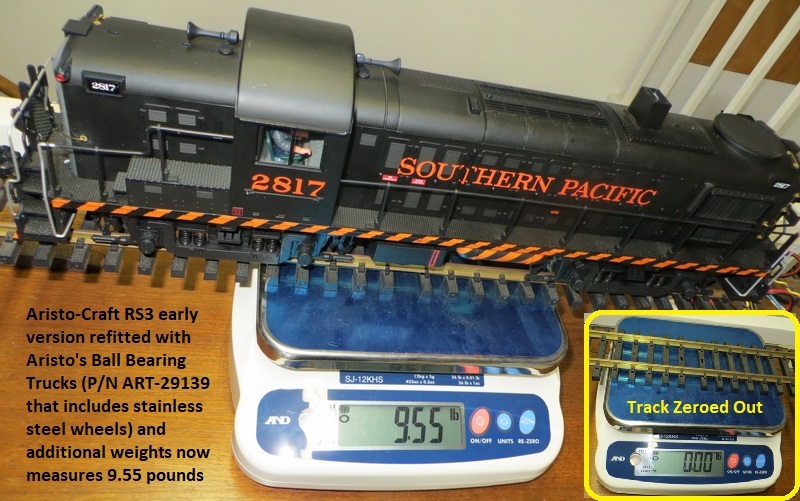 Illustrated below is how an example early version motor block having lash screws can be operationally "tuned". (The newer version ball bearing motor blocks do not have lash screws.) 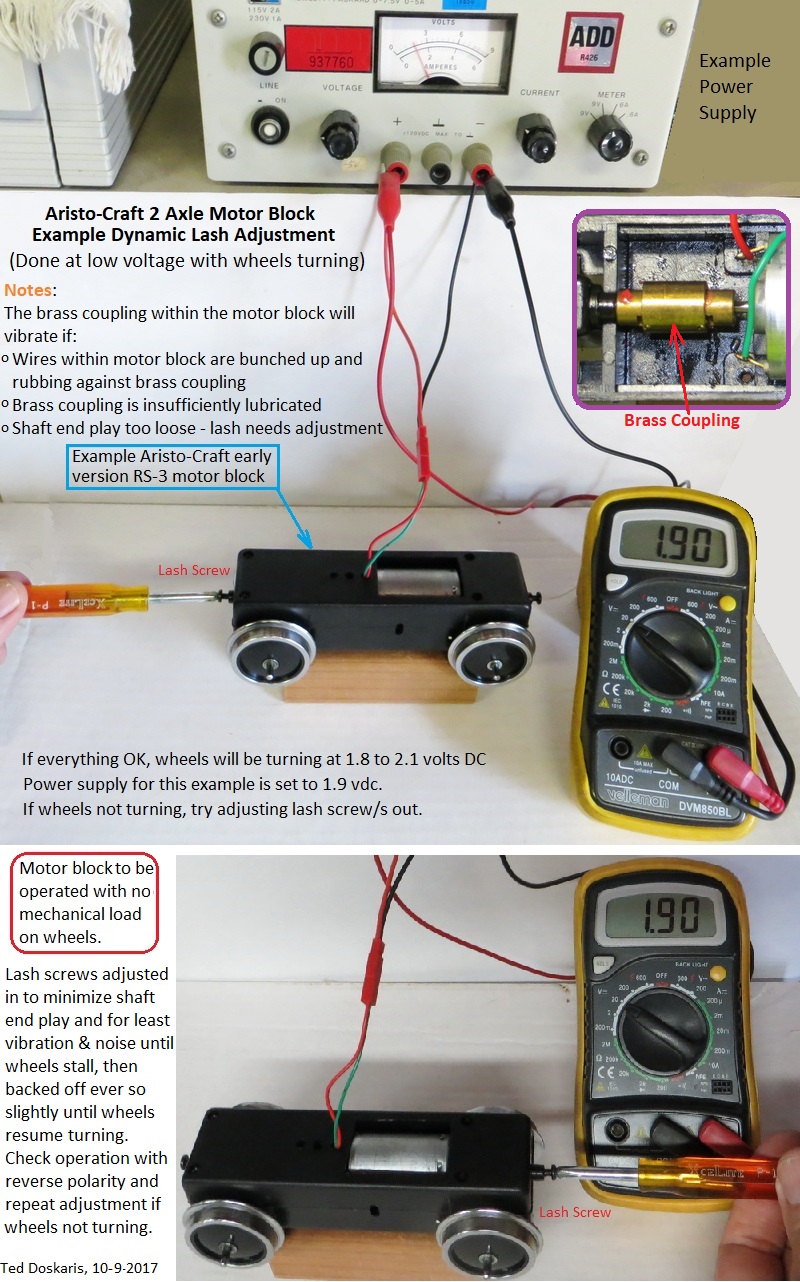 A video that was made when Aristo offered both 3 axle and 2 axle motor blocks with stainless steel reduced flange depth wheels.