The German company, Lehmann Gross Bahn (LGB), made some realistic American rail cars, including the "Modern Tank Car" made of plastic.   At this time these cars appear to be out of production; however, while they last, they can be obtained as New Old Stock (NOS) from selected mail order houses. 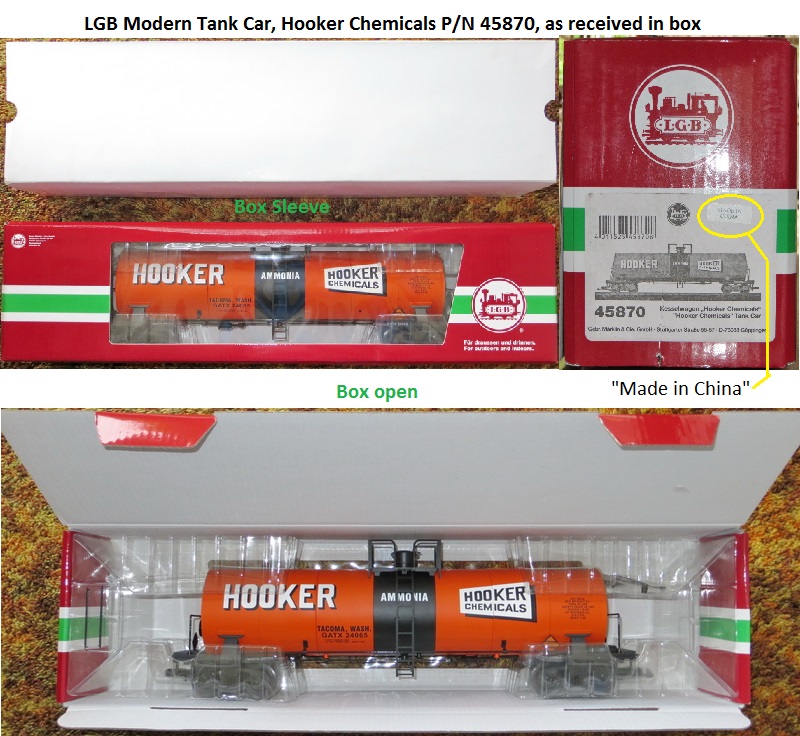 Note the front & back railings at the top of the car dome shown above are missing since they had been dislodged and found in the box due to the rigors of shipping.  They were later glued in place using CA glue. 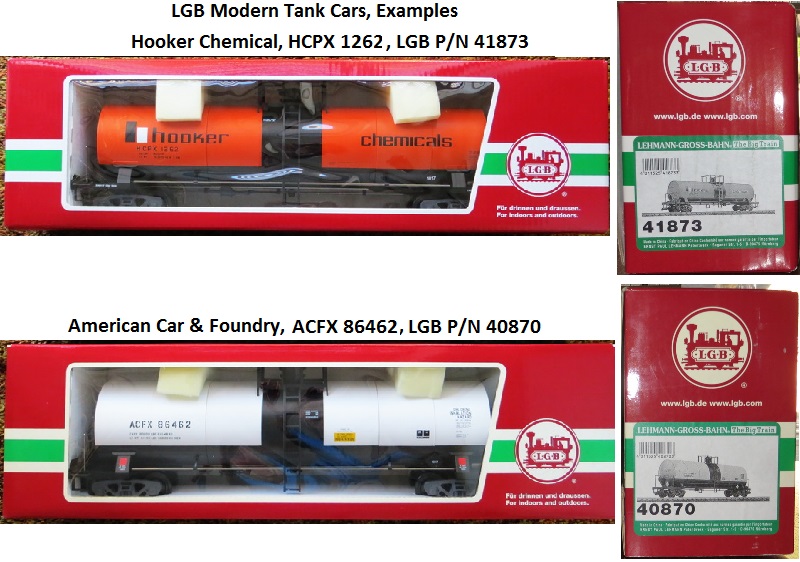 Though LGB is a German company, these cars are identified as being made in China.  The "Modern Tank Car", however, is of very high quality - but not without fault, particularly if you want to operate the car with other brand cars in a train consist:

The car sits too high off the track, is top heavy and very light weight. (Wind would blow the car over, and the car could easily "string-line" when  in  a train going around curves.) 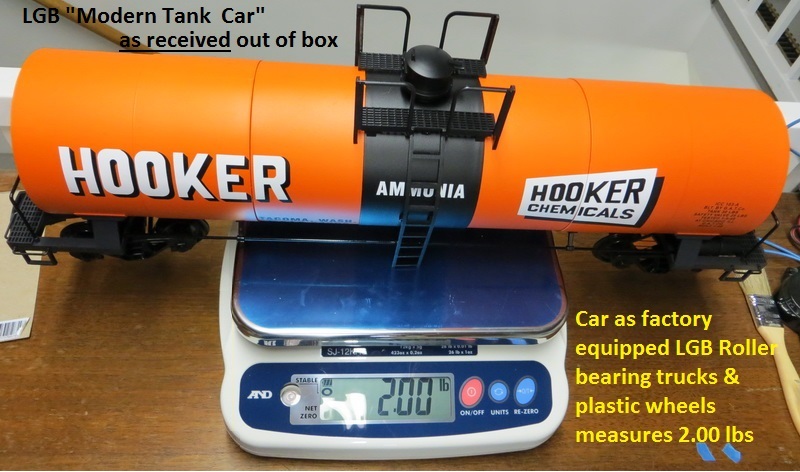 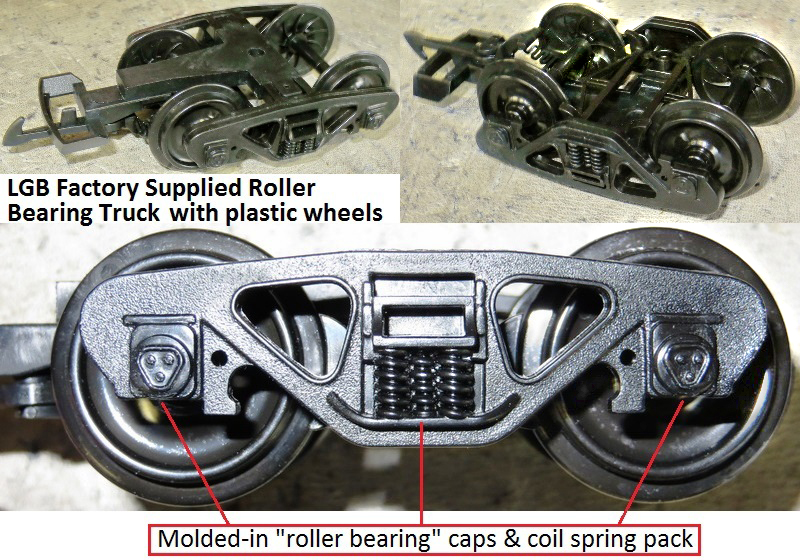 The trucks (albeit with molded in springs and roller bearing caps) are not authentic for the era the modern tank car represents. (These trucks appear to be used on other LGB offerings, including earlier era American 40 foot box cars, typical prototypes of which would not have had roller bearings!)

Examining material with respect to a prototype car is very useful for determining a course of action to improve the modern tank car and for installing the body mount Kadee 907 couplers.
Shown below are a couple of reference books. 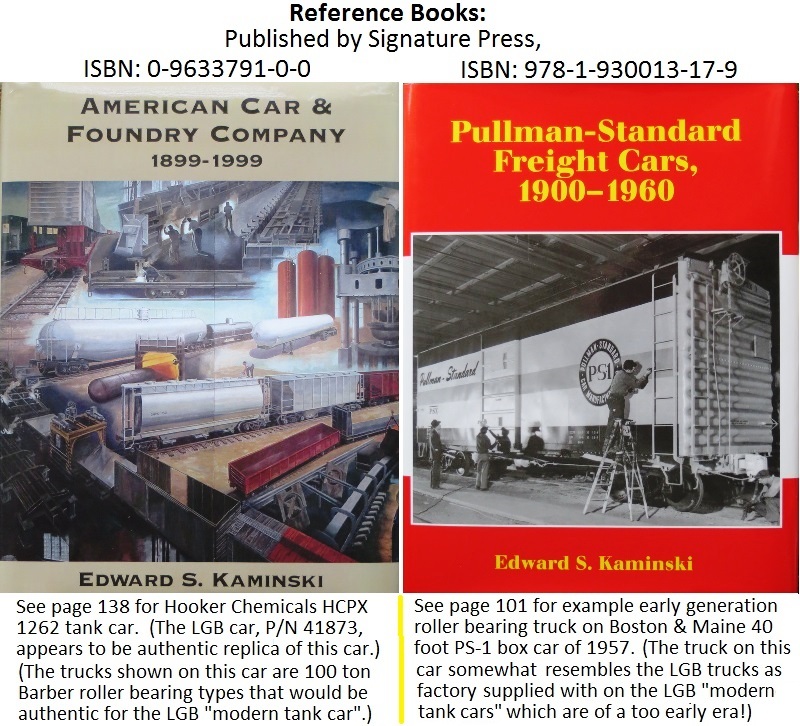 Based on the book material, observations about the LGB cars are best encapsulated in the following illustration:
(Note: The LGB Hooker Chemical GATX tank car shown coupled to an adjacent car in the illustration was equipped with body mount Kadee 907s and lowered using Aristo-Craft brand Barber roller bearing trucks with metal wheels.)

Based on research, the as factory equipped LGB roller bearing truck best resembles the Barber-Bettendorf truck typically used on a caboose - except for the spring pack.  (A caboose typically employs leaf springs rather than coils that are emulated on the LGB truck.)

It can be seen that the LGB modern tank car would be most authentic when equipped with an Aristo-Craft 100 ton Barber roller bearing type truck.  However, if an Aristo Barber truck cannot be obtained, the LGB truck can be used, albeit modified to lower the car to accommodate body mounting Kadee 907 centerset couplers.  This option will be discussed later.

Shown below is a comparison of the LGB car equipped with factory truck and an Aristo truck next to it. 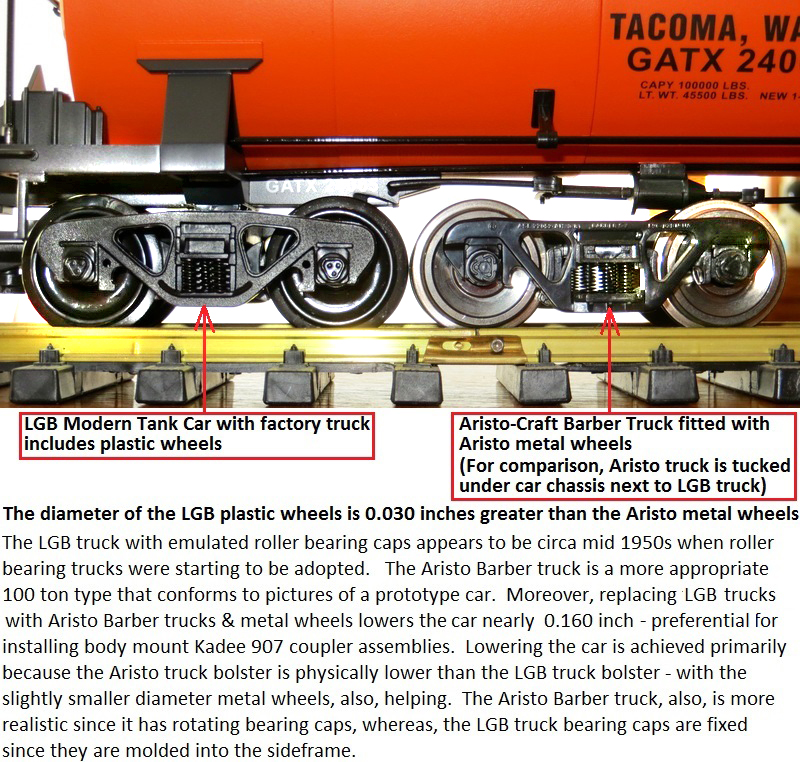 Minor trimming of the Kadee box is needed.

The Kadee 907 assembly is to be installed on the car's end frame after the end frame is modified to accept it.  Accordingly, so the box will fit into the channel of the end frame, the sides of its tail shank need to be cleaned up so there are no protrusions or mold seam lines visible.  A file can be  used to do this as illustrated below. 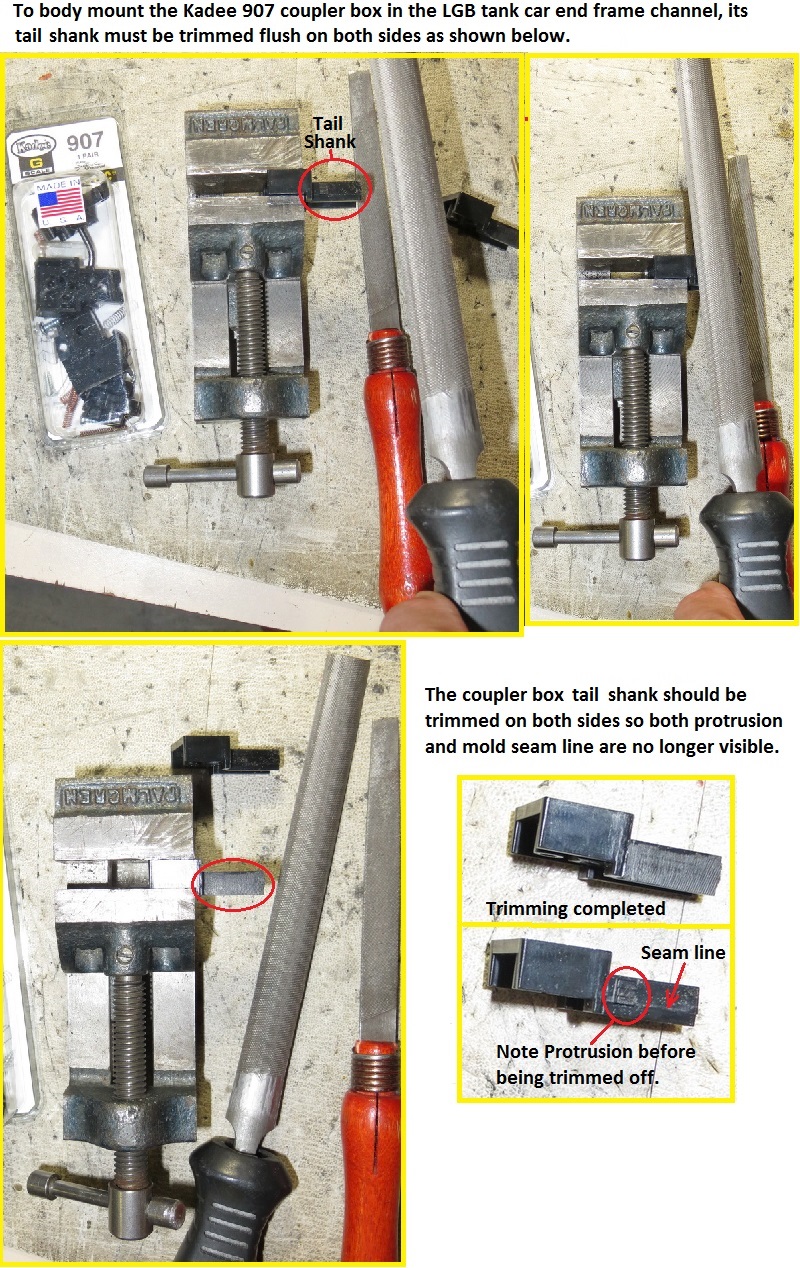 The end frames of the LGB modern tank car are slightly modified to accept the Kadee 907 centerset coupler assembly.  As such, it's preferable to remove the end frames from the car so they can be more easily worked on.  Illustrated below is the process to remove an end frame.

Once an end frame is removed, it can be modified on a work bench without having to remove the railing from it if care is taken.  Illustrated below are the modifications needed to the pocket / channel area of the end frame.  A razor saw is used to make cuts and then cleaned up with a file.
(Note:  The ribs shown in the channel that need to be nibbled down in height using a small cutter can be smoothed out with a file.  During this process, verify flush fitment of the Kadee coupler box with its cleaned up tail shank by temporarily placing into the channel.)

The end frame subassembly with mounted Kadee 907 coupler should now be reinstalled on the car.
When reinstalling it, I found that a thin shim placed under the car body bolster may be needed when using Aristo Barber roller bearing trucks so as to attain proper coupler alignment with the Kadee 980 gauge.  This is because the Aristo Barber truck will lower the car by about 0.160 inch which is slightly more than needed for coupler alignment.  In my example car, using a shim of 1/32 inch (0.031 in.) to slightly raise the car from the Aristo trucks results in a net 0.129 inch lowered car (about 1/8 inch). 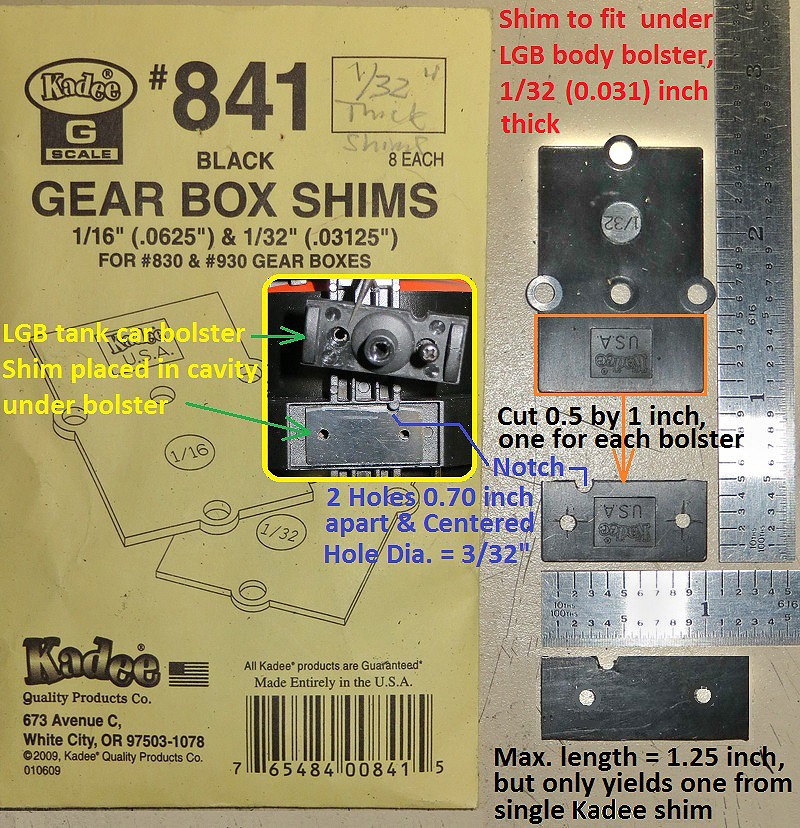 Moreover, depending on tolerance differences from production run cars, a bushing may be needed to be placed within the Aristo roller bearing truck bolster hole. 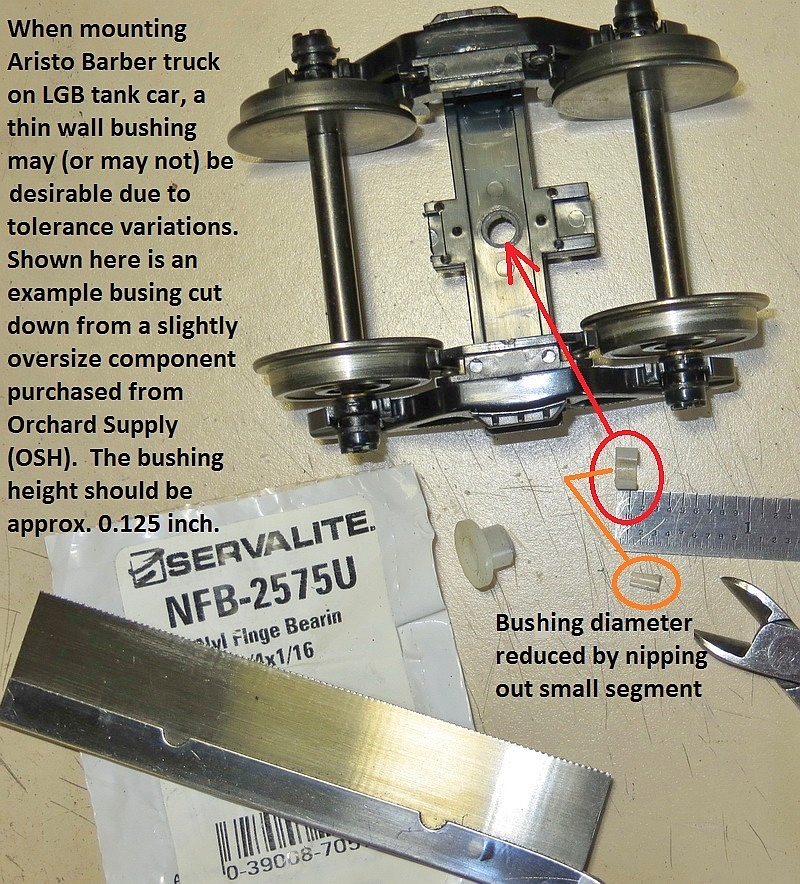 Shown below is the Car with body mounted Kadee 907s and Aristo roller bearing trucks with a shim placed under the car body bolsters that results in a lowered car by a net amount of 1/8 inch. 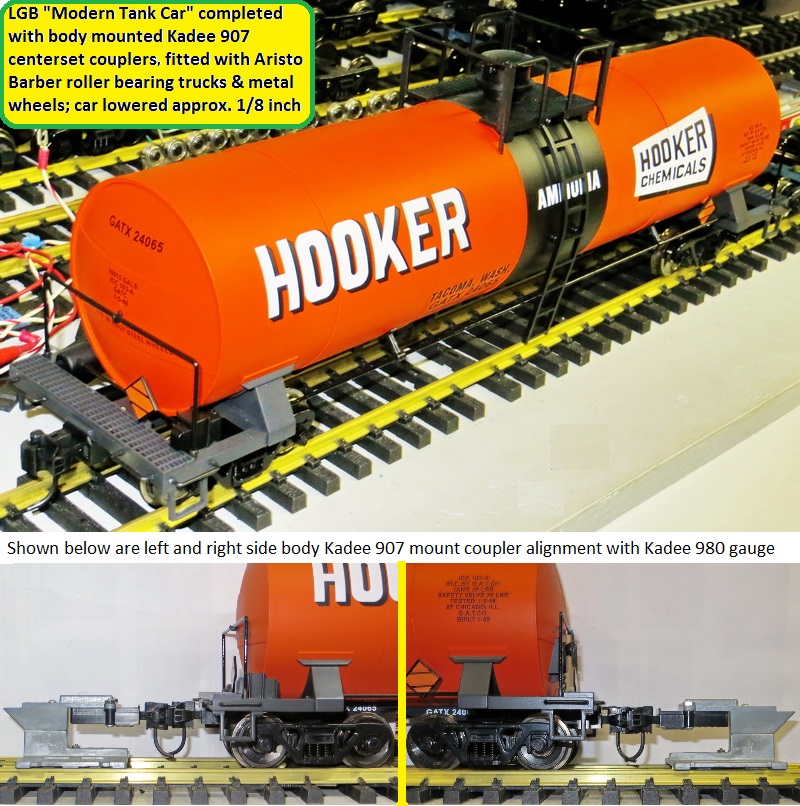 A comparison of an as factory supplied car to the modified car is shown below. 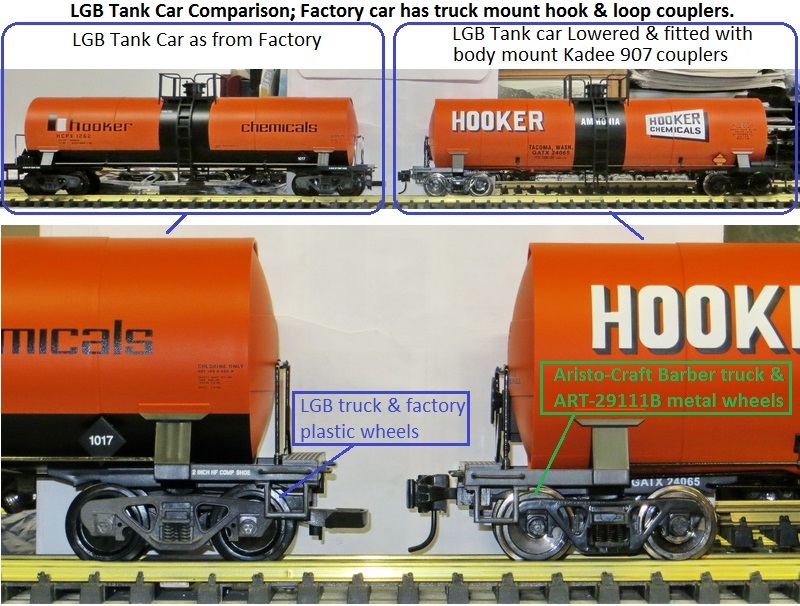 Illustrated below are fabricated parts with dimensions to use in place of the factory truck bolster.
(For the metal bracket, I obtained a Simpson Strong Tie strap, ST 2115, obtained from Home Depot and positioned its holes to advantage when cutting its length.  The plastic "H" spacer material was obtained from TAP Plastics.)

To install the fabricated parts, the factory truck must be disassembled first - illustrated below.
(Interestingly, the attachment points of bolster and side frames of the LGB truck are asymmetric, but this does not hinder the installation of the fabricated parts.) 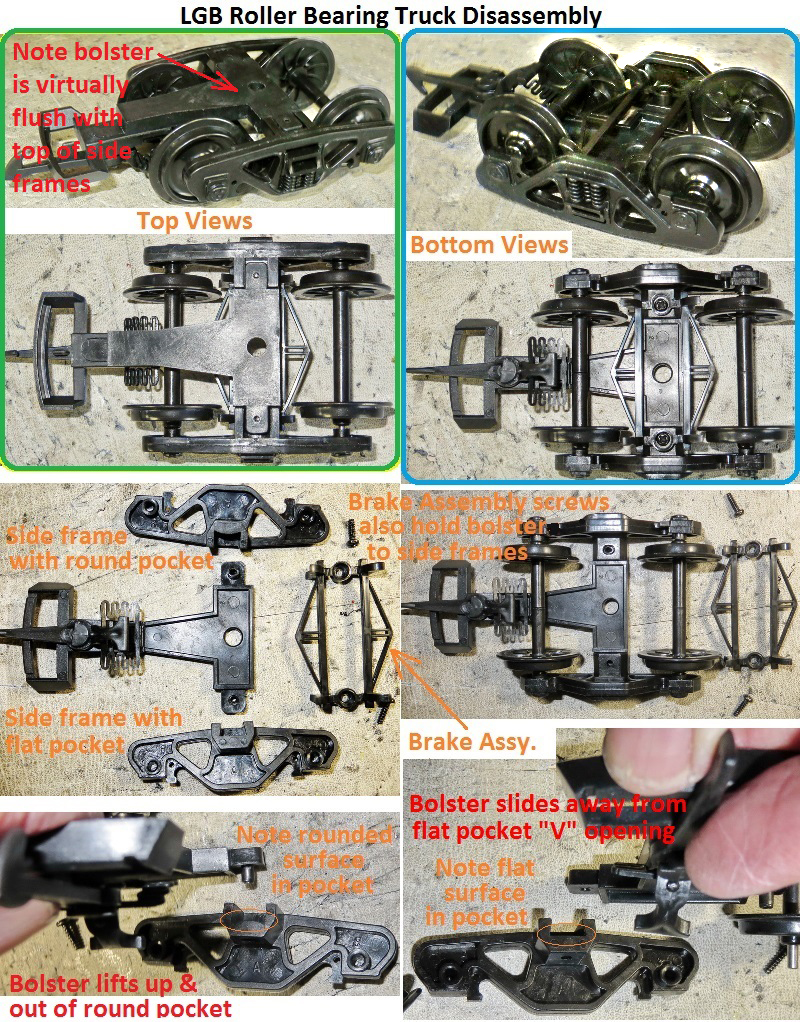 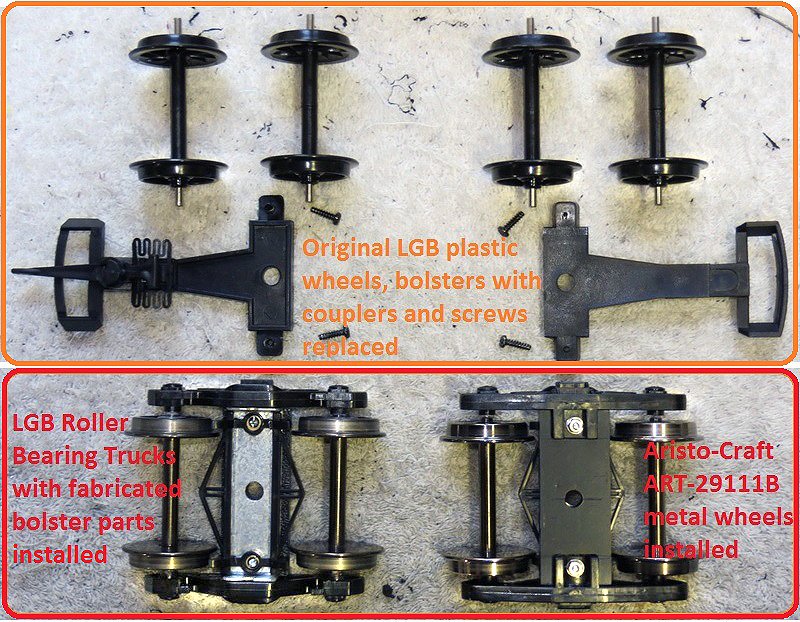 Shown below is a comparison of the Aristo Barber truck and modified LGB truck. 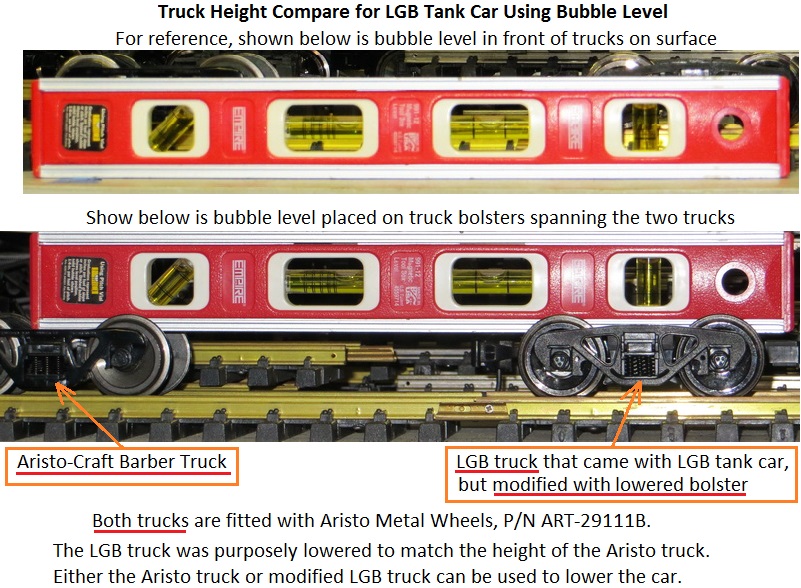 Illustrated below, the modified LGB truck is installed on the Car.
Note that a 0.230 inch diameter by  0.135 inch long bushing is needed to be inserted in the hole.  It is  fastened along with factory screw and washer. 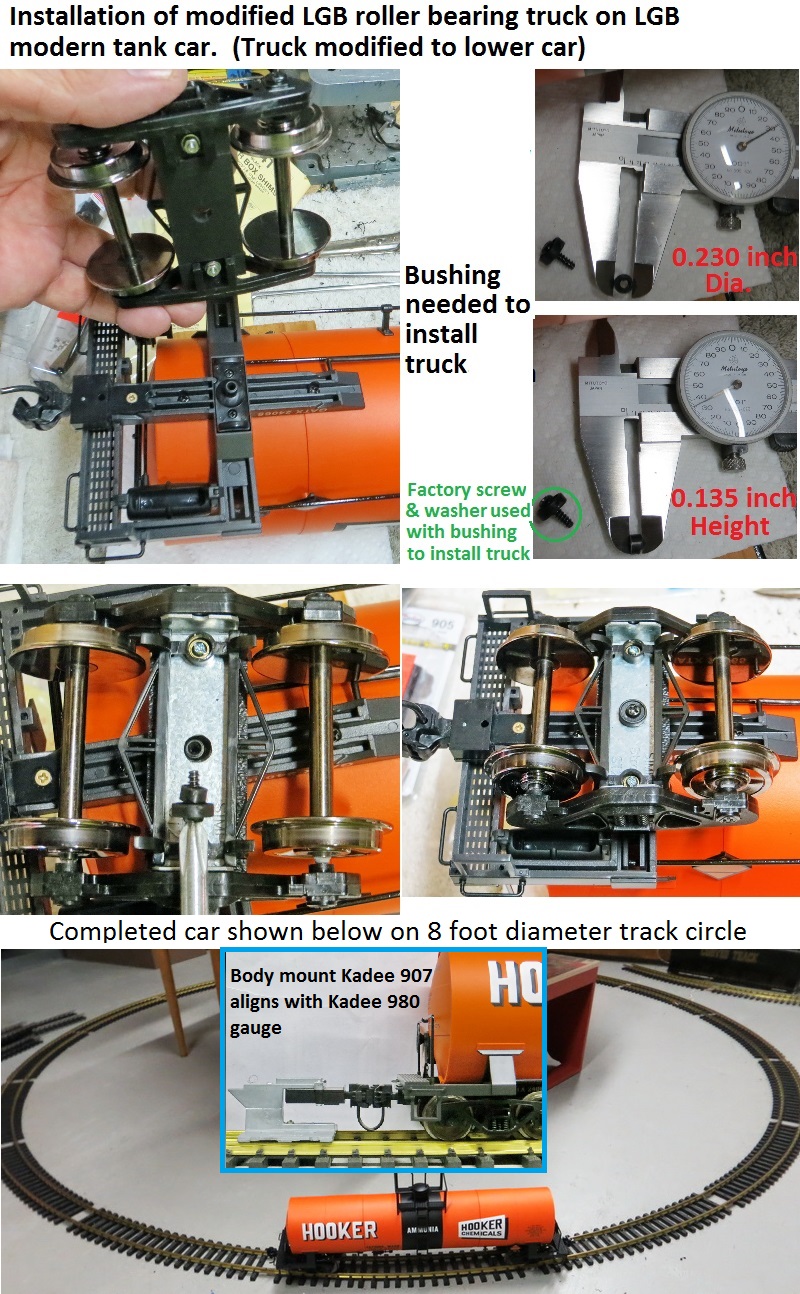 The LGB modern tank car as factory equipped with standard plastic wheels is only 2 pounds.  Adding metal wheels to the trucks does help and lowers the roll center of the car so it won't be top heavy; however, the Car needs to be weighted more for assured operation in a train consist on curve track to preclude it from "string-lining".

Unseen additional weight can be added through the dome opening of the car.  If the car is equipped with a valve assembly (seen with dome hatch open), the valve assembly should be temporarily removed as illustrated below. 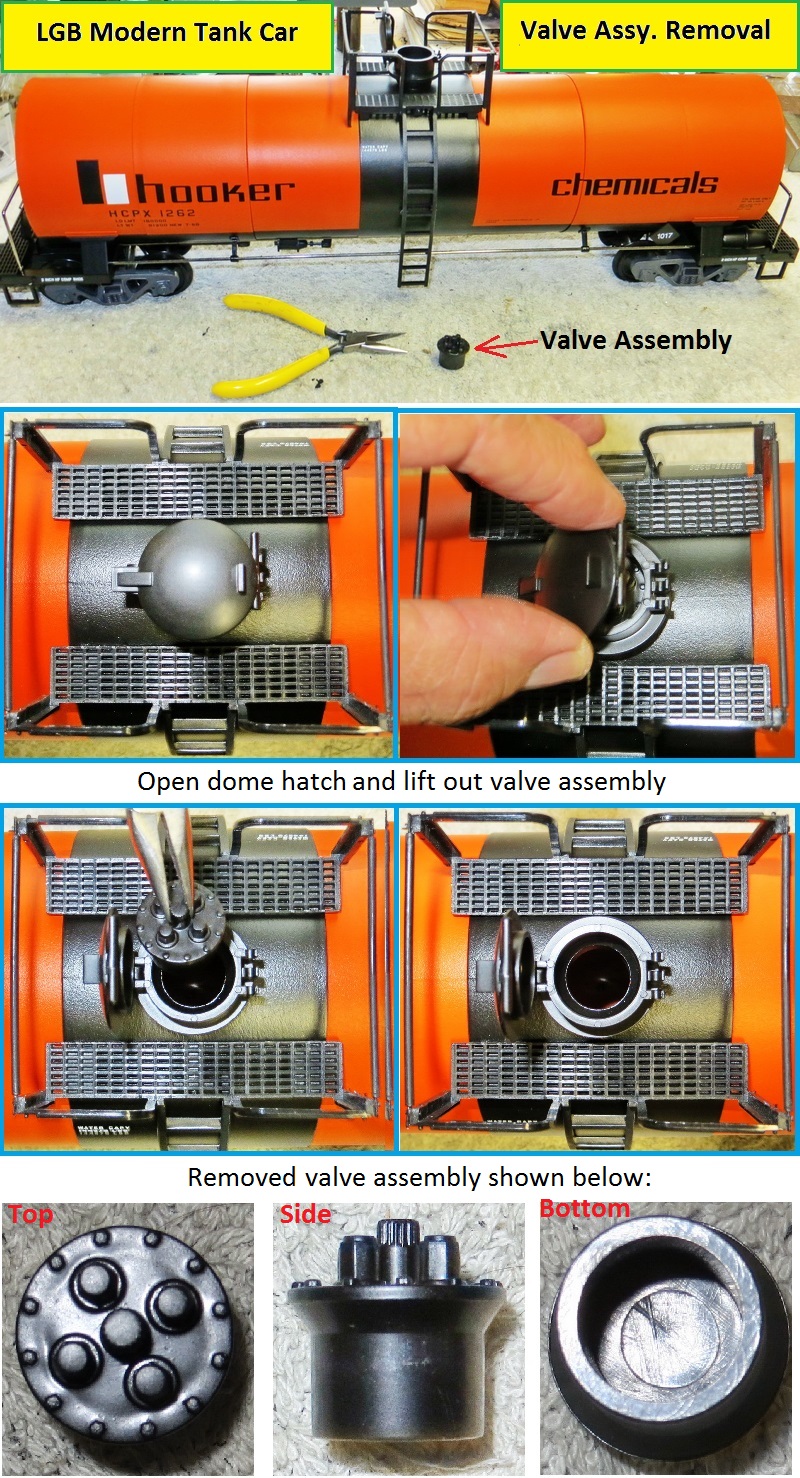 Steel 1/2 inch diameter round bar stock cut in 4 inch maximum lengths will fit through the dome opening.  I purchased 1/2 inch diameter 3 foot long bar stock from both Orchard Supply Hardware OSH and Home Depot.  Interestingly, the Car appears to include hidden bulkheads within its cylinder, so the full length of the cylinder is not available for aligning the weights at the Car's extremities.  That said, 8 weights in "sausage link" lengths of 4 inches each totaling 1 3/4 pounds can be arranged in groups near the center bottom of the car's cylinder as illustrated below.

With the weighs installed, but before foam was injected to retain them, the car weight measured 4.42 pounds. 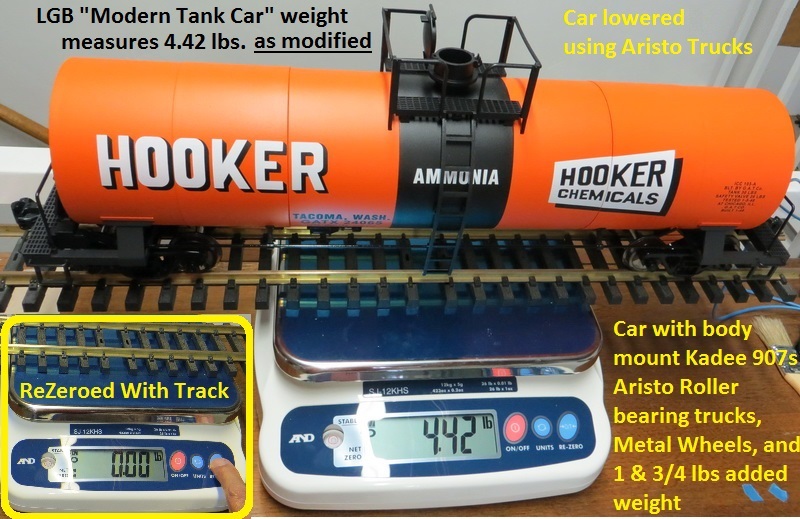 Once the weights are inserted and aligned, they can be retain from movement by using door and window non bowing foam insulation / sealant  injected through the dome opening.  Do not use the type of foam that will expand with such force as to risk bursting the car cylinder.  When administering the foam, care must be taken to prevent the foam from unintentionally sticking to the outside of the car whilst assuring the weights don't shift position.  This is illustrated below.

Even when the foam "mushroomed" above the dome opening, I  found the foam did not entirely fill within the upper reaches of the car cylinder, so I repeated the application a few times. That said, it's not necessary to fill the entire upper area with the foam, but let the foam cure/dry before moving the Car.  Finally, clean off any residual foam from the dome opening surrounds and reinstall the valve assembly into the opening, if the Car has one.

With the weights installed and retained by the foam, the car weight increased to a final value 4.62 pounds.  Surprisingly, the foam added nearly the same weight as one 4 inch metal "sausage link". 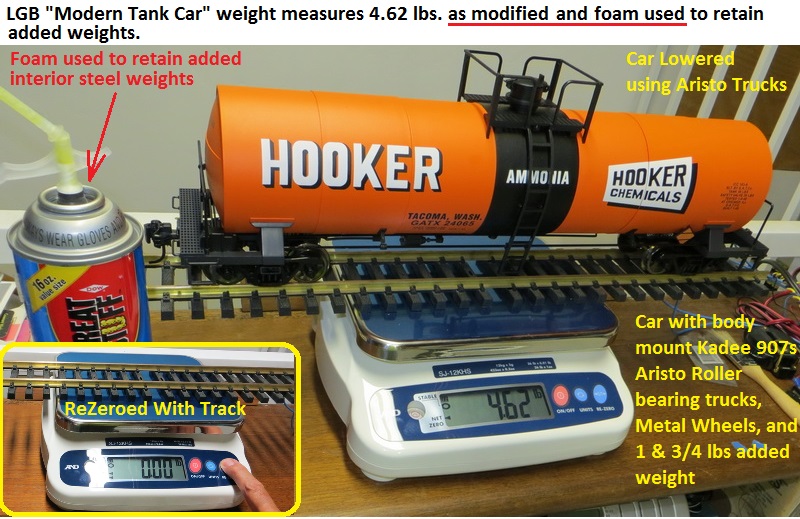 Shown below is the relationship of two cars lowered and fitted with body mount Kadee 907s and Aristo Barber trucks with metal wheels coupled & uncoupled over a Kadee track magnet and then coupled together on an 8 foot diameter track circle. 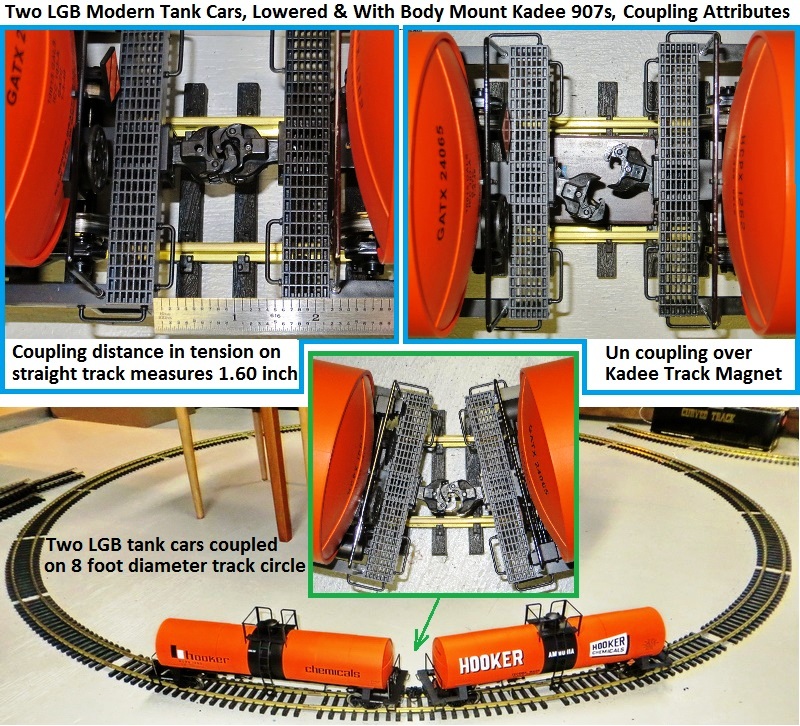