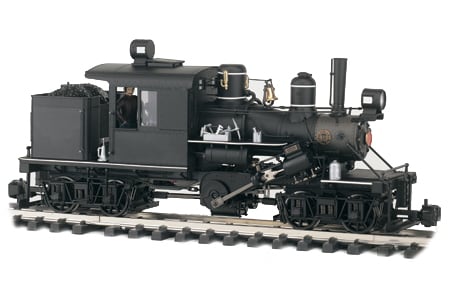 Taking it out of the box / tips

Like many other large Bachmann locos, you need to pay attention how to take it out of the box the first time. Once you have opened foam "clamshell". Once you remove the foam blocks at each end, you put your fingers under the front platform (NOT UNDER THE STEPS!), and then grab the cab sides in front of the windows.

For the newer version, there is a smoke DC-OFF-DCC switch behind the smokebox door. Be sure to rotate the latch on the left side to allow the door to open.

Also there are 2 metal tanks for sand on the back bunker. The manual says lift and pull out. WRONG, if you lift first all you can do is break off the locating tabs. Use a small flat blade screwdriver to pull the top end away from the bunker, and you will clear the top 2 brackets, THEN you can lift and continue to pull away.

Be sure to set all the switches the way you want. There is one more switch in the bunker to do the 2/4 chuffs per revolution.

Notice that the 2 ends of the socket are offeset, and there are

How the #@$! do you remove the bunker? See the 2 small valves in the front corners of the bunker? Lever them out carefully. Hey, there are screws down there! Lift the front edge of the bunker A LITTLE, you are NOT done yet, relax. There's still 2 tabs holding it in place, you need to push them each forwards, but do NOT use a sharp blade, a thin putty knife, or a ground-down x-acto blade. Do each corner separately. Read this thread for an excellent example of an R/C installation in the version 2 Climax.