This page is under construction, so some data may be incomplete, and the organization may change.

This is a modern "one to one" direct wireless control: from a throttle (an iPhone app) via Bluetooth to the to the decoder in the loco.

There is no "cooperative intelligence" between locos/decoders and any other throttles, i.e. it does not have an overall central control or database.

Trying to understand the product

Cool I said, I have used a lot of Tam Valley stuff and know Duncan, so I clicked that link... and went to a page that was more of a  "buy now" as opposed to information on BlueRail. So I said heck, I want to learn about it, not buy it now, so I went to the official Tam Valley site, after all it says "BlueRailDCC by Tam Valley"

All right. After learning the history which will probably mean nothing to most people, I'm back on the deadrailinstalls site, and I want to learn about the system not BUY NOW BUY NOW.

So now I drag my computer kicking and screaming back to http://bluerailtrains.com/ and resist EVERY link that takes me off to deadrailinstalls.com.

(By the way, there is a related product from Tam Valley, which started the whole "deadrail" thing, of DCC over the air: http://www.deadrailinstall.com/ The Tam Valley DRS1, which basically took the DCC signal from the rails of any "real" DCC system, and puts over 900 MHz.)

This is all very confusing and off-putting. I guess it is the best that the 3 different companies can manage. I suggest a revamp of the sites to help clarify the various options, just a simple explanation, and let people who want to learn go to bluerailtrains.com

A very frustrating experience just to get some basic information without being badgered to BUY NOW.

To refine the product search and understand, there is the original deadrail concept from Tam Valley, which just sends the raw DCC protocol from the rails/booster of a DCC system over the air, just like CVP AirWire does. That is NOT BlueRail.

Early reading made me a bit confused but after digging I understood the reference on the home page: "BlueRail has updated our app to support control of DCC trains" This makes sense later, keep reading.

So, let's concentrate on the main product, the BlueRail decoders that have a motor driver and lights and can ALSO interface to a standard DCC decoder for more functionality.

How the system works:

One great idea and distinguishing feature is that the receiver/decoder can drive headlights (2) and the motor itself, or operate as a DCC booster and drive a standard DCC decoder directly.

A neat idea, but not really as cost effective as it seems if you are going to use a DCC decoder in the end, more later.

The app sends commands to the receiver/decoder, and because it is Bluetooth, while limited in range somewhat, the bidirectional communication is very helpful in giving feedback.

There are some nice features that are helpful on wireless, like behavior of the loco when you disconnect, and also an auto connect option, to connect to a loco automatically when in range.

There is a consisting function, which has more than average features, letting you specify lead, mid, rear locos, and facing forwards and reverse.

There is a nice video on the web site showing the consisting, but right off it tells untruths about DCC consisting.... saying that consisting requires a programming track, can take hours, that you must edit CVs, and it has added control. I have several NCE and Zimo DCC systems, and consisting is easy and I never have to touch CVs.

When someone tells untruths about a competitor, it puts a very sour taste in my mouth, and it makes me wary and more sensitive to more untrue and misleading comments. Clearly Dave Reese has never done consisting on a DCC system like NCE or Zimo which allows universal consisting and advanced consisting, and much more control.

OK, now that I've blown off steam, BlueRail has a nice graphical way to consist multiple locos. The screen will show up to 3 locos at a time, and if you have more, little arrows appear to allow you to scroll. Neat.

The real time speed matching is clever, you run the locos about a foot apart, and then you can tweak the individual speeds of the locos at low, mid and high speeds. There is also what appears to be the start speed (CV2) in consisting. The system does make this easier though, that is for sure. (note that speed matching unloaded locos will get them close, but locos can behave differently under load. In most cases this method works well enough). 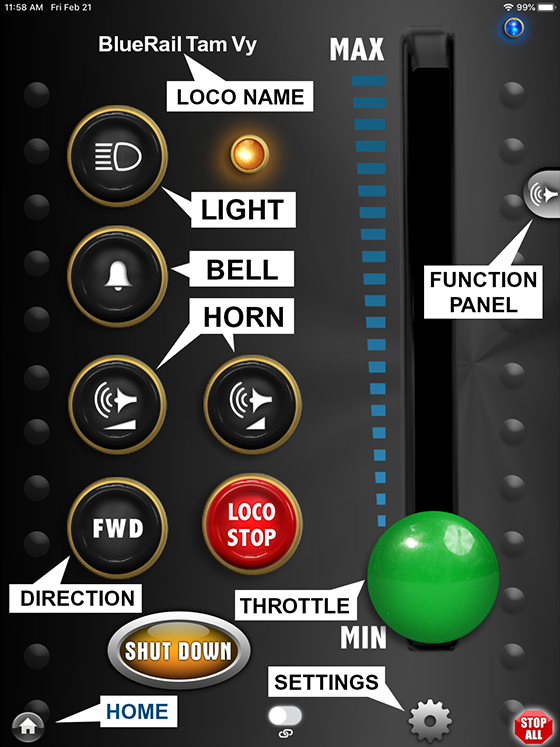 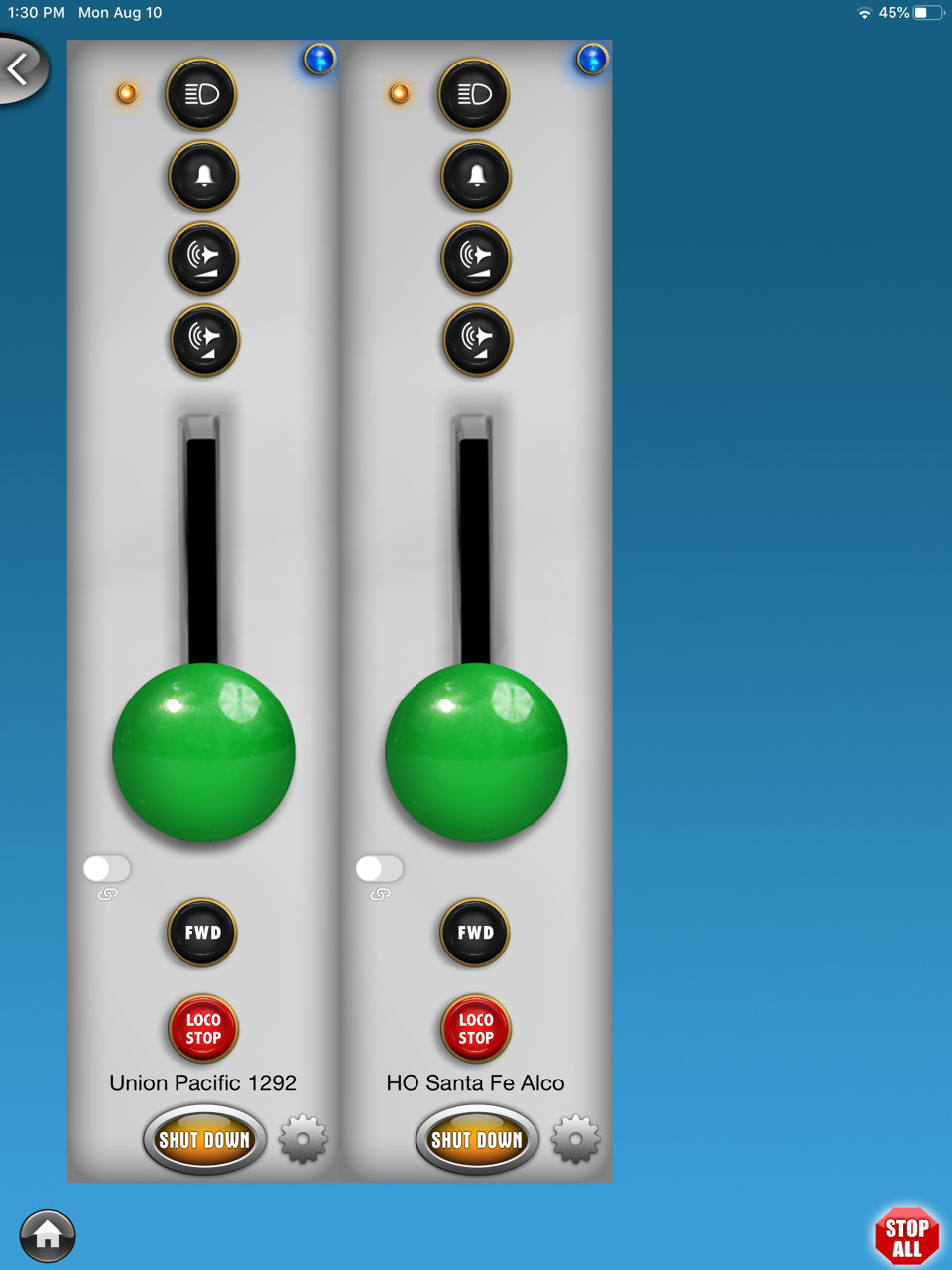 You can run up to 3 trains and display 3 throttles on one screen, again, if you have more than three, small arrows will appear that will let you scroll left or right.

BUT, most systems have a "recall memory" to allow a large number of locos to be pulled up quickly... All the major DCC systems do this. I need to find out if there is any other "memory" for trains, but I doubt it, it appears that whatever is on your screen is also "live" / "connected"

There are several models, but I will only present the ones suitable for G scale. 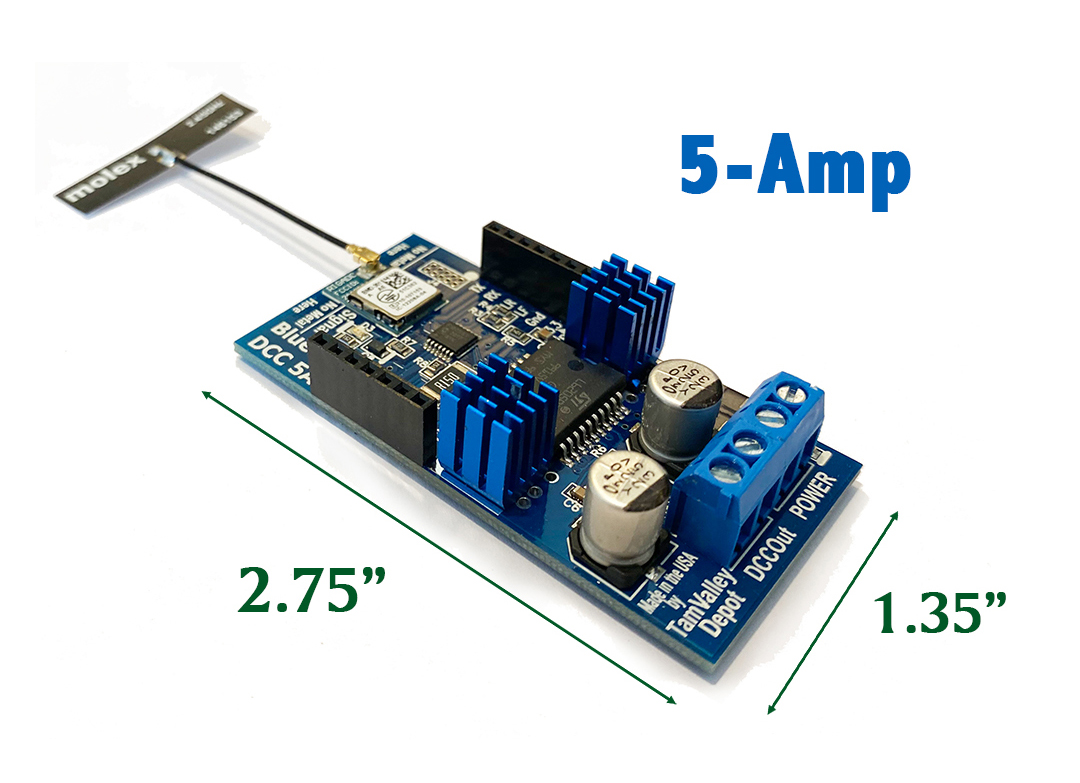 Kind of a cool idea, use the output drivers to either power a motor directly, or change them to be a DCC booster, to drive a DCC decoder.

Clearly, no sound from the basic board.

So the basic decoder costs $160. Sort of expensive for just a motor decoder and 2 lights. For comparison, a top brand of DCC decoder has 8 function outputs, 4 servo outputs, superior BEMF motor control, 4 amps continuous, 10 amp peak for about the same money. (clearly the DCC decoder does not have a BlueTooth radio transceiver)

I guess the value proposition here is the throttle is free by cell phone app. But the app is only on iPhone, and there are free apps for iPhone AND Android for the JMRI software (free) that works with many DCC systems.

Adding sound is more expense, and there are 2 ways to go, a cheap sound system for $100 that is not synchronized to load or the loco, connected to the motor (ugh), or add a DCC sound decoder with many more features and load dependent sounds.

So, quality 5 amp DCC decoders with sound cost about $200. Now without batteries, your BlueRail loco electronics are $360. Use a cheaper sound card and you are about $260.

The Convrtr from AirWire is $140, 20 bucks cheaper, but I guess that with the free throttle that BlueWire wins here

The issue is there are products like RailPro, where the entire decoder with sound is $170, about $200 cheaper per loco.

Where is the cost? When you think about it the unit with DCC sound, there are TWO 5 amp power output stages in both implementations, in the first booster in the receiver, and in the output stage of the DCC decoder.

So, funny, now I "get" RailPro, the level of features and control are pretty high (compared to simple remote control) and $200 less per loco with sound almost as good as the top line decoders.(I have been researching wireless proprietary systems)

Cost wise per loco, the BlueRail system makes the most sense using no  sound or an inexpensive sound card.

BlueRail is not using the advanced consisting capability built into all modern decoders. This is clear since all decoders must have address 3. So all the automated stuff a modern decoder can do (customize which functions operate in which locos, lighting, other sounds, etc.) has to be done by the app itself.

That is not a game changer, if the app is expanded to give the same functionality, and the graphical support stays at the same level (very helpful and easy) then actually BlueRail can go beyond what is in the advanced consisting features in decoders.

What is important is the functionality available and the ease of use.

I know there is theoretically no limit to the number of locos in a consist, but it looks like you can only have 4 consists defined at one time. I don't consider this limiting for most users. In my case it would be limiting. I would need about 8, but I'm the exception. Consists of at least 4 locos have been accomplished.

The only manual seems to be the user guide:  http://bluerailtrains.com/blueraildcc/userguide/ there is also a youtube video

One thing that is pretty ambitious is that when you are reading and writing CVs, BlueRail helps you by telling you what the CV does, like JMRI.

What is too ambitious at the present, is you must tell Bluerail what the decoder is, and if the support is not complete, you cannot access that CV with the gui,

There's an additional niggle, that can cause problems, looks like writing the CV is done in OPs mode, not the NMRA service mode. Many decoders have restrictions on what CVs can be written in OPs mode. Reading CVs is indeed done in NMRA service mode with "direct read" (there are several modes to read and write CVs)

OK, first thing I will consider is the LS decoder with a DCC sound board.

Right off the bat I see an issue: The BlueRail LS receiver/decoder/booster has an absolute max input voltage of 18 volts.

This means with li-ion batteries, you are limited to 4 cells (5 cells could be 21 volts right off a full charge)

So after coming off the full charge, the nominal voltage of 4 cells is 14.4 volts, which is WAY too low for G scale locos except some of the steamers that will run a scale 25 miles per hour. This won't run diesels fast enough except perhaps a USAT.

Seeking information on this.

The important thing to get here, is that the designers have worked hard to make the many functions of DCC