This yellow Aristo MKT (Katy) car is prototypically authentic being described and shown in the following book:
Missouri - Kansas - Texas Lines in Color
By Raymond B. George, Jr.
Published by Morning Sun Books, Inc.
ISBN 1-878887-28-9
Unfortunately, the pictures in this book don't show a full side view, but on page 12 the description characterizes the car as a Katy 40 foot autocar converted to mail storage service.
Pages 12, 15 and 24 all show this yellow colored car as the first car behind a steam loco within a passenger train, circa 1943 - 1945.

The Aristo car is a nicely executed replica of the prototype with scripting that includes "New 10-45" and "Railway Express Agency Storage Mail". Aristo's Michael J. typically does an excellent job on the artwork and graphics, and this car shows it.

This car was made for the 2008 Midwest Large Scale Train Show - offered in 4 road numbers.
Thankfully, it comes standard with factory installed metal wheels - unlike its comparable standard Aristo offerings - and as such is a good value for the money.

Shown below is the packaging for two example Aristo MKT 40 foot double door box cars having different road numbers. I purchased the two examples in road numbers 45051 & 45057, and my thanks to Robby of RLD Hobbies for getting these for me. 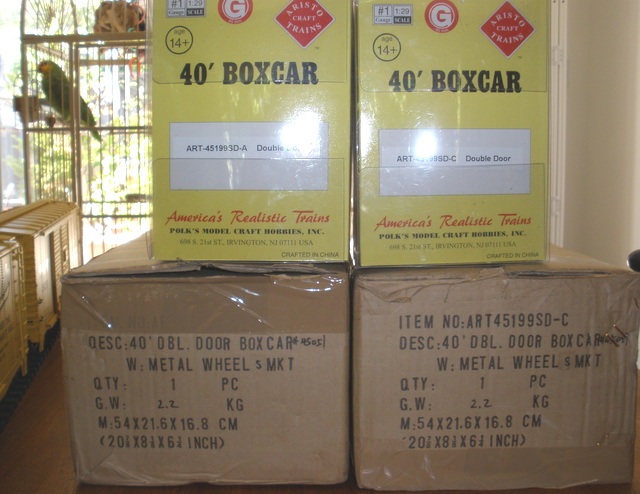 Shown below is one of the two cars with its yellow box still factory wrapped in tissue paper. 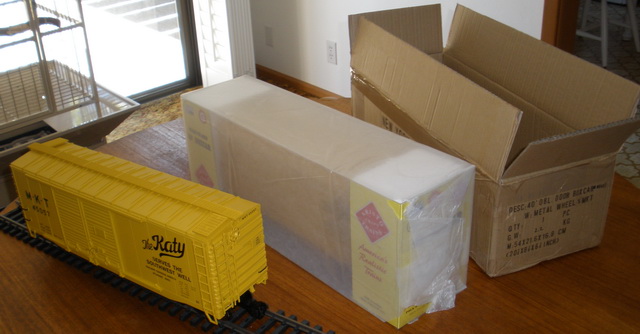 Shown below is MKT car road number 45057 with its clear plastic box in the background.
The factory included the little booklet within the plastic box with the car. 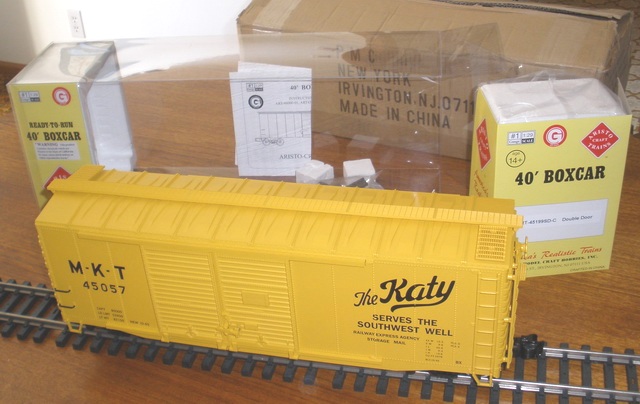 The side view of the car is shown below:

Shown below are different views of the two yellow MKT cars coupled together: 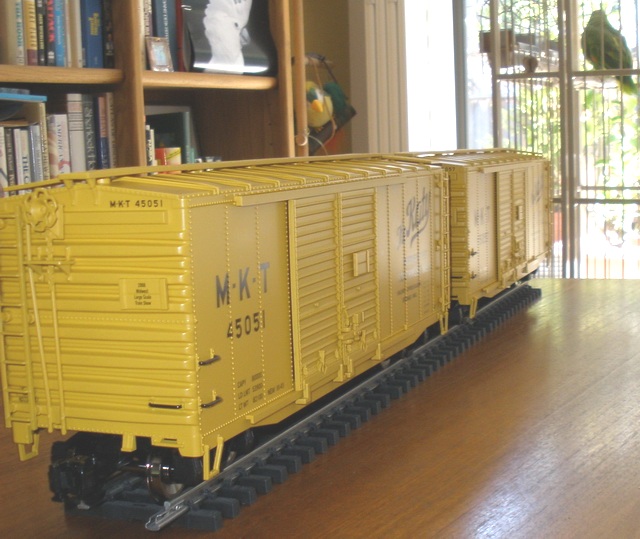 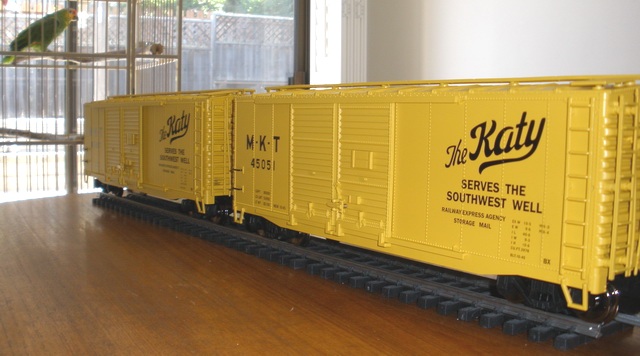 Unfortunately, the floor assemblies on these example Aristo MKT cars are installed with the incorrect orientation! This is very disconcerting and disappointing.
This incorrect practice had gone on for more than a decade with many of Aristo's other 40 foot type freight cars that share the same floor assembly. But it seemed to have been corrected since the more recent, prior factory production run cars have been OK.
I am aware that Aristo's factory was moved not too long ago, so this may be a result of poor communication and lack of attentiveness associated with that move.

To wit, shown below is an underside comparison with the brown Cotton Belt car on the top and the yellow MKT car on the bottom.
It can be seen that the factory has reverted to incorrectly installing the floor assembly with the wrong orientation on these MKT cars. The large air tank should be closest to the NON brake wheel bulkhead like the correct Cotton Belt car shown at the top of the picture. 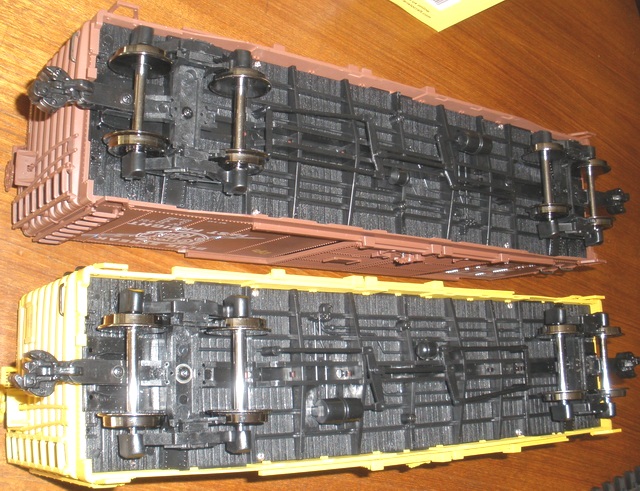 Also, note the metal washer is now positioned on top of the truck bolster for the MKT car.
Prior production run double door cars had the factory installed metal washer located under the truck over the floor bolster pivot post. Doing this will provide more car articulation for less than perfect track work - but may result in some car wobble during train operation. (So long as the factory continues to supply the washer as they should, it is not a big deal to change it to suit one's needs.) 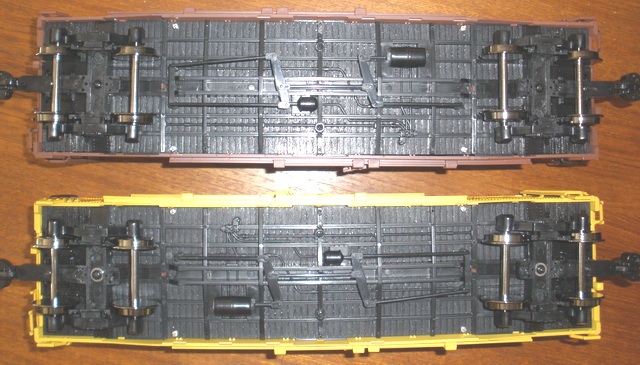 Re-orienting the floor will be very easy to do with these double door cars as you can easily get your hand inside to help guide the long screws for R & R that retain the floor to the car body. 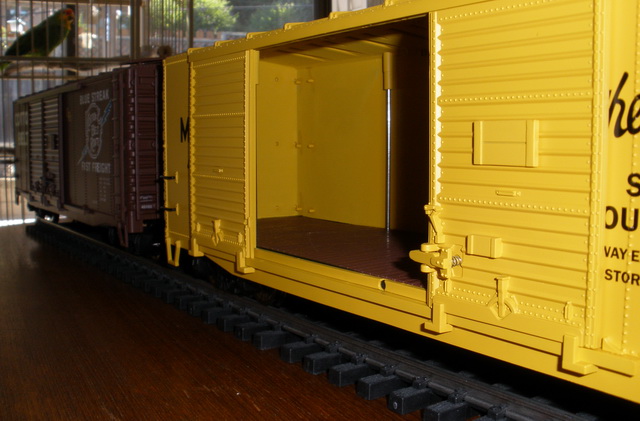 The interior is shown below 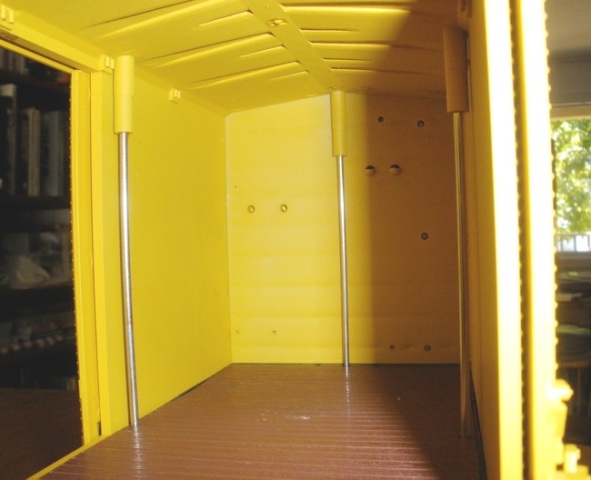 The split floor bolster posts seem to be fixed (actually factory repaired for the MKT cars described here) compared to those that plagued the prior factory production run of double door box cars, but there is evidence of a potential problem. (The floor assembly is shared with many other Aristo freight car offerings - so any split post problems would be expected impact these, accordingly.)

In the way of an example,  note the new MKT car shown below on the bottom of the picture does not appear to have a split floor pivot post like that of the Cotton Belt car on the top.

Shown below is a closer view of the split post on the prior production run Cotton Belt car: 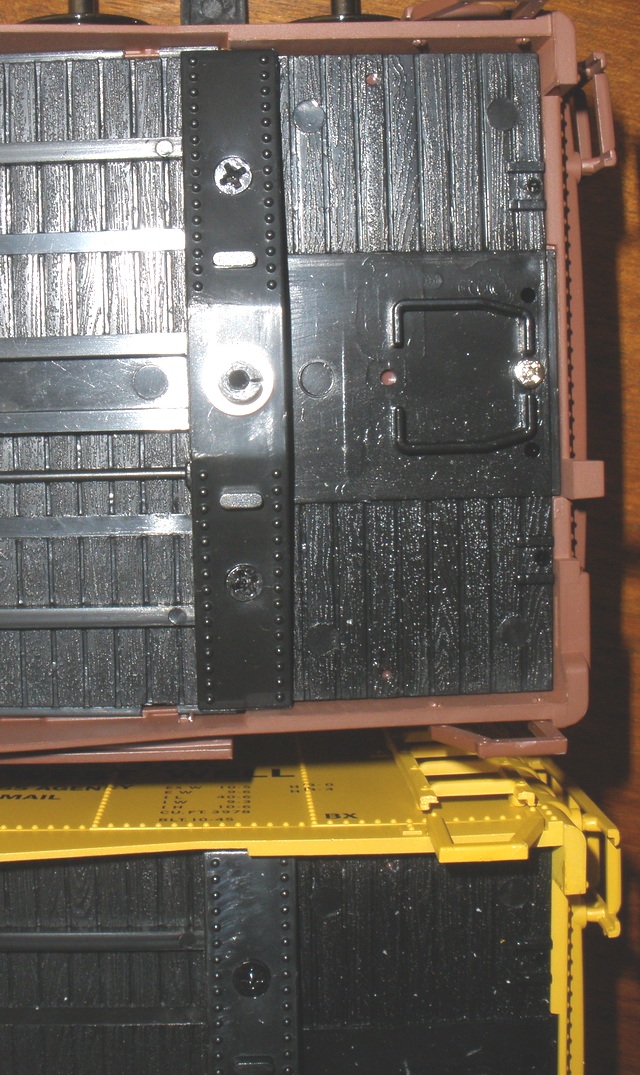 RJ Deberg first reported this problem on the Aristo Forum sometime ago -  so it appears the factory has since corrected this with this newer, second production run, example MKT car.
However, looking at the second MKT example car's bolster post shows some deformation with it - appearing to look like a split that was filled in! 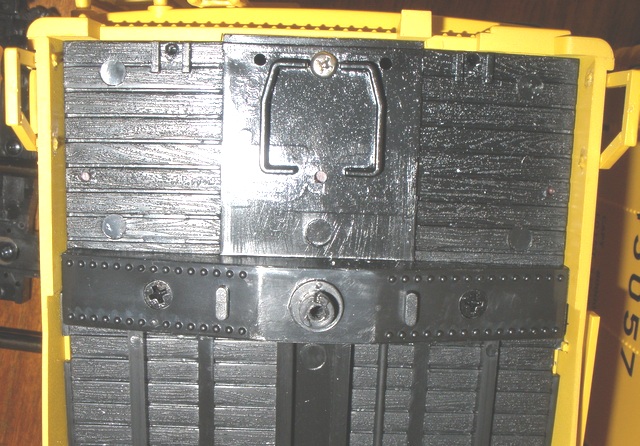 The opposite end of this car is shown below: 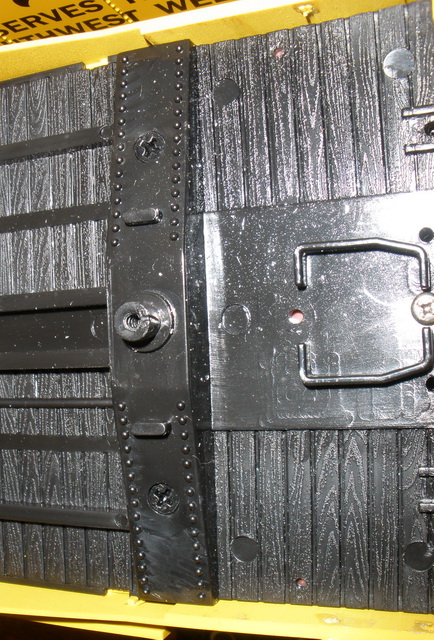 Having examined many older production run floor assemblies on Aristo cars I have, they do not show such flaws - so it appears the factory process is not as perfected as it once was with respect to these MKT production run cars.

The Aristo factory has since produced a  3rd production run of the double door box cars, and they appear to be corrected for both the truck pivot post and floor orientation.
See these at topic, Aristo-Craft's 40 foot Double Door Box Car &  Kadee Couplers


For information about Aristo's 40 foot car type floors, including floor R & R and wrong orientation, see the article I wrote sometime ago.
See this at topic, Lowered floors for 40' cars