OK, on sale often for $350+ this is a great deal. But, there are a lot of negatives to this loco you should be aware of. Even with the negatives this is a good loco to own, but it is far from perfect.

USAT came out with a docksider in late 2008. It was delayed a bit, and many people were wondering why this model was picked.

A sound unit is included, it not very good. It is NOT the standard Phoenix that USAT normally uses.

The smoke unit is likewise not the nice TAS unit that USAT uses in the Hudson and the Big Boy, so the smoke, while it does puff, is anemic.

Here's a youtube video of my first testing of the sound system:

TWELVE  years later, you can still find the USAT web site page that STILL advertises "stainless steel rims" on the drivers. It's a lie, they are plated brass. The picture below is from Mike Kidman, a G scale dealer. I have not seen excessive wear on mine yet, but I do suspect that people are trying to run this loco on curves that are too tight. 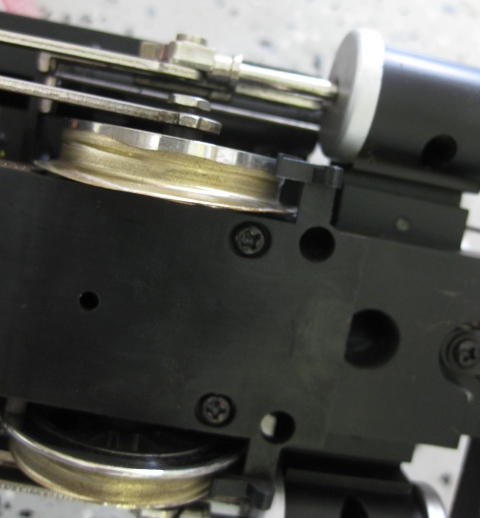 Lay the loco on it's side or back.

There are two screws to remove under the cab; you see one just above the air cylinder, to the rear of the last driver, in the large flat spot under the cab windows.

There are 2 other screws to remove, they are just in front of the front drivers on the bottom plate, the two dark holes you see forwards of the last of the 8 screws that hold the bottom plate on.

Once you have removed the screws, the boiler and cab lift off as an assembly: 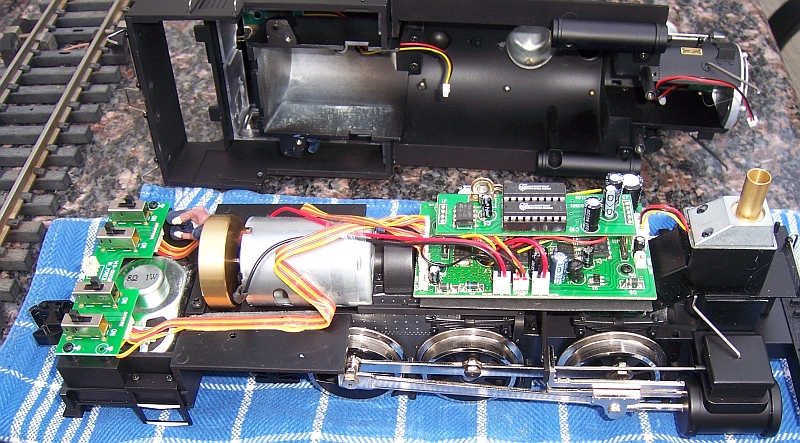 The assembly is in 3 parts, the cab, the firebox and the boiler:

The three components can be separated by removing 4 screws, the 2 screws on either side of the cab light wire you see coming from the hole in the "firebox" and the 2 screws immediately to the right. Note the screws are of different lengths.

Surprise! The smoke unit puffs! There is a gear that runs from the front driver, and there is a little connecting rod on it, and apparently a piston.

There is a sound system, but it's poor quality, and a lot worse than the sound systems in the other USAT Prestige series. It should really be thrown away.

Here are some pictures (courtesy of Jim Agnew)

The picture below shows the stock configuration. The board on the top is the sound board, the trimpot "VR" adjusts the sound level. There are more functions on this board, when Jim cut this board off, his lights stopped. It may just have a pass-through, or a regulator for the lights. 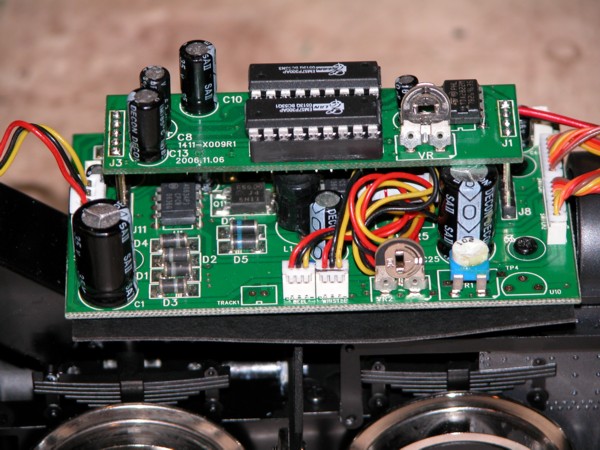 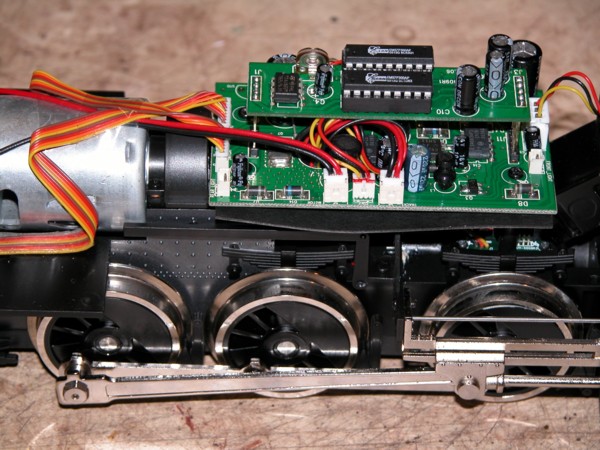 The picture below shows Jim's modes, an NCE D808 is on top of the main board, and a phoenix sound board on the very top. 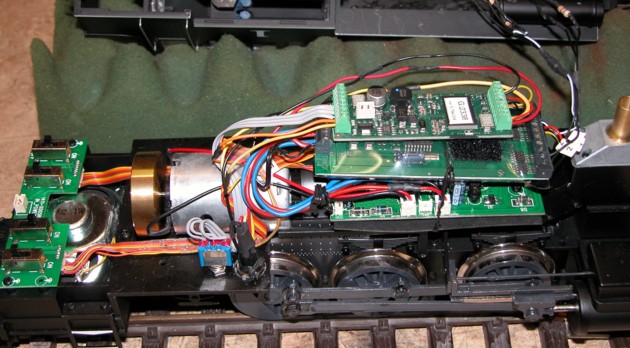 I'm still deciding what to do, but most likely I'll throw all this junk out, but keep the connectors...

Jim also added Kadees front and rear, he used the 1779 and tapped the end beams to mount the draft gear.

There has been one report that after a collision, some wheels slipped on the axles out of quarter. I've not investigated myself, but looks like there is no knurling or keyways on the axles. Check this is you have problems.

Early units apparently had metal "brushes" on the backsides of the drivers, later production had carbon, it might be worth changing to carbon if yoiu have the metal ones.