Organization and pages on this site:

This is the "entry point" and overview for the MX10 and the MX32 / MX32FU throttles.

The overview section will help you see the hardware, but the bug list and suggestions will not be useful to a first time user.

Next you should use the links at the bottom of the page and read the "Getting Started".

After that, the other sections are identified with descriptive hYou should read this if you are a new user.

At the bottom of the page are the separate links to more details, you should at least read the "getting started the first time"

The MX10 is the long awaited upgrade to the venerable MX1 system. Zimo makes very high quality equipment with lots of bells and whistles. In the past, I have stayed away because of the very high cost and also some of the features are unique to Zimo decoders only and I use a variety of decoders, so specialized features only applicable to one particular manufacturer is not a big advantage.. Also, I'm so spoiled with the NCE cabs, with plenty of dedicated buttons, clear menus, and not tons of nested menus. Also a color display or showing pretty pictures of my locos are not my top priorities.

But, based on the promise of a 20 amp system, and the ability to put a full 24 volts on the rails, I bit the bullet. I received my new system from Train-Li in August 2015. I've been updating my site as I learn it.

Currently, in January 2019, the firmware is in an "acceptable" state. Over the last year, the updates have stabilized and the system responds much better and lockups are rare. The help screens are still not complete and not all in English.  The Ethernet interface is somewhat working, but not the interface to JMRI. .

I had waited years for this product. I have a Zimo newslettter from July 2011 saying it's in the final stages of development. The November 2014 newsletter says it's in production. July 2015 was the first shipping as far as I can tell.

This is one of the most expensive systems on the market, if not the most expensive. The MX10 command station is $2,100 and the wireless cabs are $600 each, but can be found at a slight discount. (I'm happy with my purchases though!)

A promised feature is that the command station will be able to program Zimo sound files, saves you $200 for the separate programmer. As of 2021, still not delivered.

On the other hand, Zimo has always been great with firmware updates, so I have confidence that the additional missing features will be added without hardware updates.

As usual, very nice hardware construction, and so many options, it will take me some time to list them and figure them out.

The throttles are a good size, and the OLED display can be fairly well seen in bright sunlight. The very configurable display helps a lot and you also have a slider that shows throttle speed, and bright LEDs for direction, and status of accessories like turnouts. There are several unique features that makes the cabs exceptional, it's too bad that their literature does not do a better job of pointing this out for prospective customers.

The top row of "dashes and boxes" is really a status display for the multi pin connector on the back.

There are 2 track outputs, so the track 1 output voltage is below on the left, 22.8v and the current the big 10.4 number

the circuit board temp is below, 37 degrees C

upper right is 82 DCC packets per sec, also can be MM for MM, or D/M for showing both.

Below are statistics for Railcom messages received, this shows 0 Rcom

and lastly the CAN 7 in the bottom right corner is the number of can packets per sec, sometimes shown with a % error.

2 pin socket - Schiene 2 - this is the track 2 output, which also is the programming track output.

3 pin socket with + M +, with 30v and 12v identified. This is DC The 30v is the voltage supplied through the CAN bus, and is limited to 4 amps. The 12v is used for t eXnet and Loconet connectors and is limited to 2 amps.

2.5 mm audio socket - line out jack is interesting, there seems to be an internal speaker

Under the USB is a loconet socket.

There is a 16 pin dip socket for input ann d output, need to verify the pins, 8 inputs, respond to negative and positive rail power (remember the N and P on the track outputs?) The 6 outputs can source up to 25 ma max, constant current is specified at 15ma each. , (each, can all run at the same time?) What is the output voltage and polarity? The inputs seem to be specified at 3 volts.

The screen is what I would expect a color display to do in sunlight. It is an OLED display, about the best you can do for brightness. This is a far cry from the super high contrast monochrome LCD in the NCE cabs. The mitigating design features are that the speedometer is white, so very contrasty, and really the speed can be set with the slide lever. At first I did not like this slid throttle, but it allows you to glance at the throttle and instantly get an idea of speed, so it turns out this is a good thing.

There are wired and wireless cabs. The wireless cabs use Zigbee, and can also be operated wired. These are the MX32FU:

Not really happy with the multi-function keyboard with letters that are German abbreviations, but I will learn, I guess: 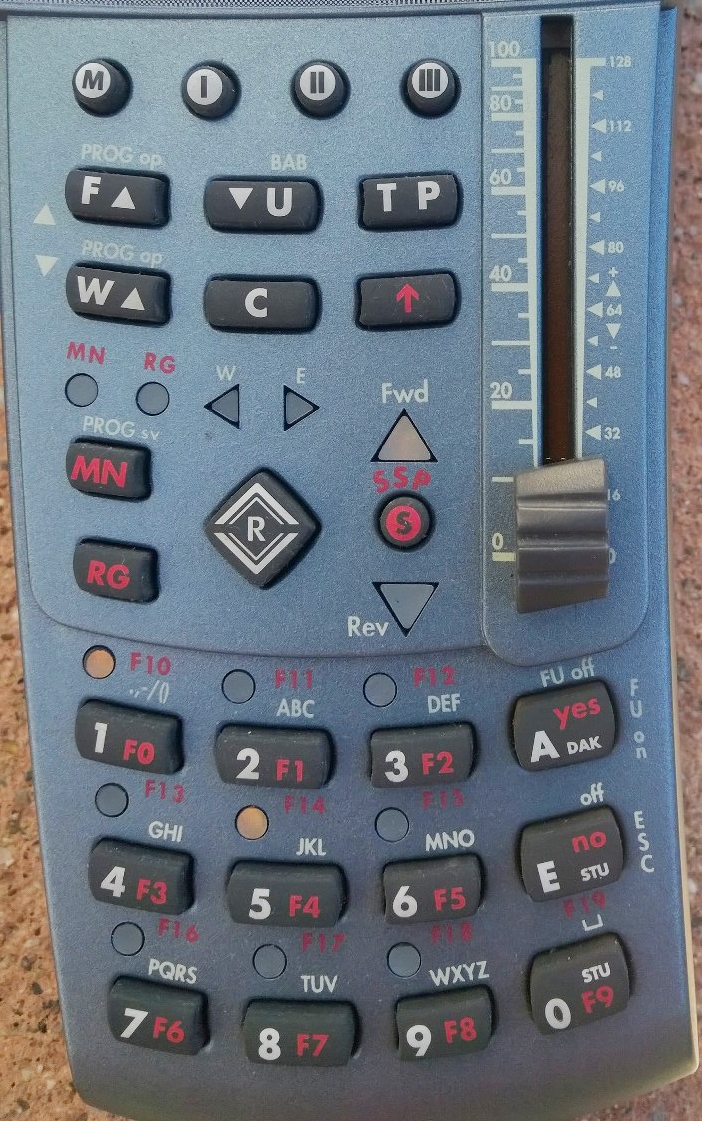 The control devices of the ZIMO digital system are traditionally referred to as "control panels"; its shape has allowed it to be used as a tabletop or handheld device for four generations. Now there is a major facelift, which on the one hand represents a design and ergonomic upgrade, but also offers potential for future performance features through software extensions.

Right from the start, the MX33 remote controls (and the MX33FU radio version) offer greater user-friendliness and ergonomics thanks to several measures such as the larger screen (2.8 inches diagonal of the MX33 instead of 2.4 inches of the MX32) and the capacitive multi-touch glass, also with additional buttons (for stop handling and east-west direction), RGB LEDs (all colors can be displayed, integrated in the buttons) and a new scroll wheel. 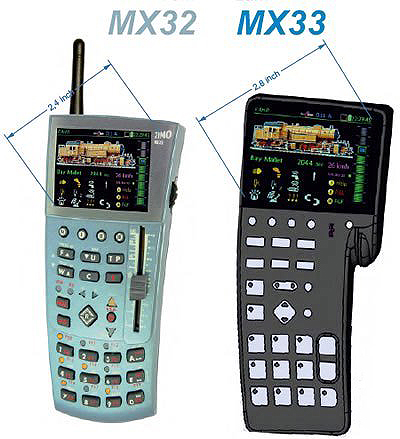 A small 8 amp supply is provided, but for the full 20 amps output, this Meanwell was recommended: 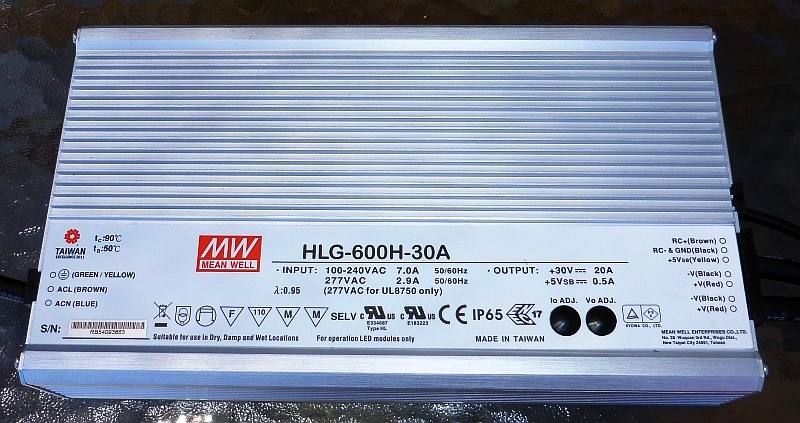 This version is nicer than the ones I typically use, no fan cooling, all sealed.

The MX32FU throttles work in Zigbee in the 2.4 GHz spectrum, but are on a different channel model than Wi-Fi. More detail and suggestions for setting channels on a subsequent page.

ROCO makes a box that interfaces and allows their throttles and also apps for Android and iPhone. You can also use these apps directly to an MX10 that is connected to an Ethernet network.

There is also apparently a WiFi solution from Germany. See the partners on the top menu on the Zimo site.

Computer interfacing to the MX10:

JMRI is not supported yet, but apparently Zimo has made the interface spec available. I am investigating how to get this working, there are several options, and it's just a matter of time.

Be sure to read the firmware pages carefully, the updates can be tricky, and many times you have to load other files because fonts or symbols "disappear". This is at the top because there are some really important features missing or only partially implemented, even though the system has been available since 2015. Don't get me wrong, I love the system, it's the most capable out there (or will be!), and the addition of new features is beyond the other systems available.

My verification of new features:

page 4 states you can make your own "8POLAxM" cables, but no wiring diagram is given

page 6 states that the current consumption is from 70ma to 300 ma while charging battery, the units use more current when charging

page 9 and other locations speak of a "communications dot", in English a dot is a small round circle filled in, this is a box that flashes and is sometimes filled... need a better description

C key deletes from loco recall but not the object database

last line on page 23 is probably wrong, or only true for object in mx10

in system setup, set the AT and BT momentum

Is the programming track output only on output 2? What happens when track 1 & 2 are paralleled?

Track voltage can ramp up? 1-60 sec ramp time is implied

The short circuit shutdown time can be programmed, from 0.01 (or .1?) to 5 seconds in increments of 0.1 second. During the shutdown time, the system holds a constant output current and lowers the voltage to achieve this

Can these work together if the track outputs are paralleled?

Zimo indicates that you must use a regulated supply

What are the plans for the ethernet? Will you be able to just hook a wifi router to it?

Notes on my throttles: