It appears to be "right on" in scale, and the details are as fine as you could want. The bottom hatches are spring loaded and open.

The coal load is ok, the detail is no more than you could expect from a mold. It's too shiny, will try a spray of clear matte, but heck, it's provided with the car.

Aristo deserves praise for finally (but slowly) moving towards getting the Kadee 830 mounting pad right.

I am building a unit train of them.

This is as close as Aristo has ever gotten to getting the Kadee coupler mounting pad right.

There are 3 things you need to mount a Kadee 830 to the body:

Recently, Aristo made a new floor for many of their freight cars. They have #1 for the first time in years, but the height and the distance from the end of the car is wrong, way wrong. To mount an 830 you have to:

This offset hopper car has #1 and #2 correct. Depending on the wheels you replace the crappy plastic ones with, you will need 1/16" or 3/32" of shim to mount the Kadee standard #830 body mount coupler.

Mounting Kadees on the car:

I threw away the plastic wheels, and used AML metal wheels, since they scale out to exactly 33" in diameter and are much cheaper than the Aristo metal wheels. (They also come correctly gauged out of the box, as opposed to the Aristo ones, woefully under specification)

In either case, you need to trim the coupler tang off completely flush with the bolster to clear the draft gear box:

When mounting the 830, I only use the 2 side screws, no reason to use the one in the back, you can see tension on the coupler will press the back of the coupler housing up against the body.

Be sure to lubricate the journals, they come dry from the factory. I prefer graphite, it does not attract grit. I spin the wheels and tilt the truck side to side while they are spining to work in the lube.

The Aristo hopper was 1 lb, 10 oz as delivered with Aristo truck mounted couplers and plastic wheels.

I really look the looks and detail of this car, and have about 8 of them as of 2009. Keep up the good work Aristo, maybe the next Kadee coupler mounting can be 3 for 3!

Interestingly, the MDC hoppers that are supposedly in 1:32 are very close in size, close enough they could be mixed in with the Aristo's:

The Aristo is on the left with AML wheels and Kadee 830's body mounted. The MDC is on the right with the truck mounted coupler.

You can see that the MDC is shorter and smaller, but sits almost the same height, probably just too much space between the trucks and the body. 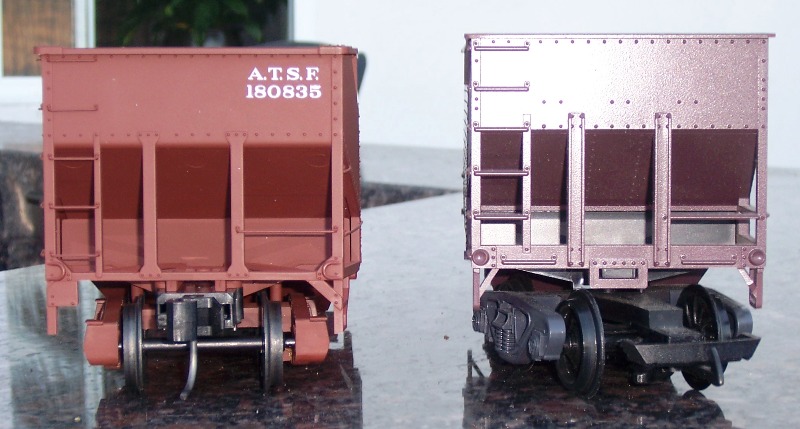 The MDC looks higher here, and it's obviously narrower.