Remove the handrails from the loco boiler: pop the stanchions out of the boiler, just squeeze them between your fingers and pull. Also remove the 2 small handrails/grabs from the front of the boiler, right behind the marker lights. Again be gentle, and put some tape on them so not to lose the stanchions.

If they are tight, try putting a thin cloth on a philips screwdriver, and using that gently as a lever. I recommend putting some pieces of tape on the end stachions so they don't fall off and get lost. Now, loosen, but do not remove the 4 cab screws. Notice that the 2 screws on the engineers side are almost impossible to get to because of some piping in the way. Get a real small diameter Philips and just GENTLY push the piping aside JUST A LITTLE BIT. Remove the 4screws from the underside, the front 2 are straight down from the steam chests, the 2nd two are between the second and third drivers, about an inch forward of the firebox. You have to be careful to get around the air tank on the engineers side, and the air pumps on the firemans side. You might need to move the drivers a bit to clear the rear screws. You can do this by taking a low DC voltage and applying it to the motor brush "tabs" on the small circuit board on the end of the motor. Now lift up the boiler, and be careful. lift the front up to try to clear the smokebox front. Now lift the rear and keep trying to pull the boiler forwards. You are trying to not destroy the small piping at the back of the boiler, as seen in the picture below: Unplug the wire from the smoke unit and the boiler is free.

Here's the chassis, notice the weights and all the empty space. I still prefer the electonics in the boiler, but there is room for a nice speaker in there:

End view below, showing the stack of metal plates for weight. Below is the wiring at the the smokebox, you can see that the headlight and marker lights are wired together. Below is a picture of the wires to the connector, on the top side (remember this is upside down). Right hand wires are cab light, middle two are headlight and markers, and left 2 are the smoke unit. In the picture above, notice the white goop on the wires. This is meant to protect the wires from breaking by flexing right at the connection. Not all Consolidations have this. Considering that the wire is solid, it would be a good idea to add some hot glue or silicon to yours if it is missing, or add a little more to the existing one if yours looks like this one.

It appears that there might have been an idea once to keep the cab light separate, but with 8 wires, 2 for track pickup, 2 for motor, and 2 for the smoke unit, there's only 2 left, so apparently the cab light, the headlight and the marker lights all got lumped together. Sad.

People that don't use smoke might want to use the smoke unit wires for the cab light. Since this is track voltage, changing to an LED and adding a dropping resistor would be one way.

Below is a picture of the front of the tender, you can see the date stamp, and the 8 pin socket. 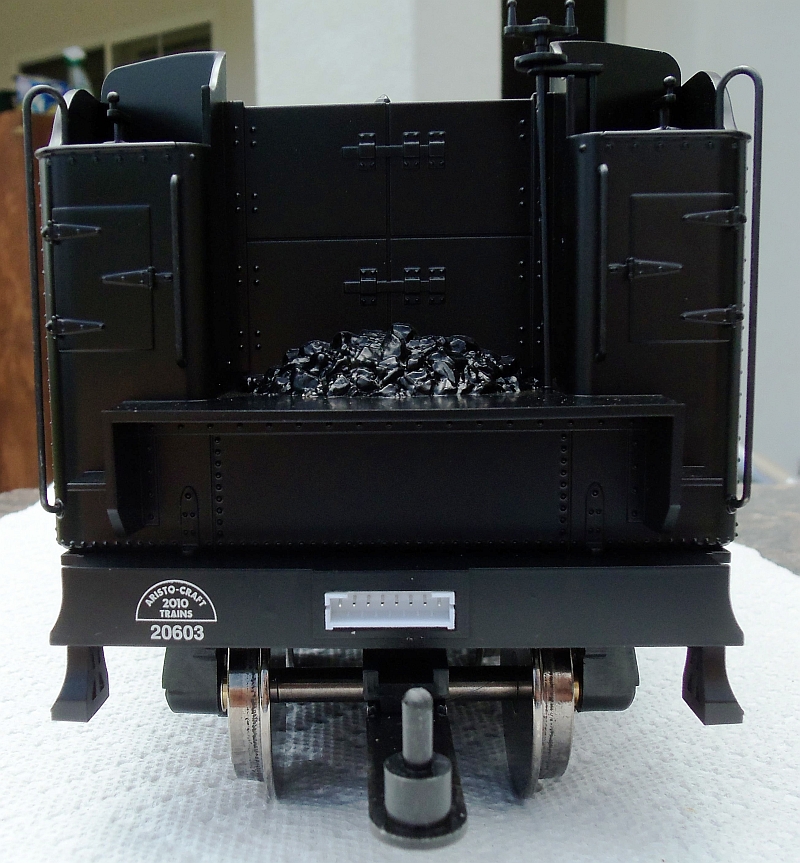 Below is the rear of the tender, with the (soon to be removed) battery connector. Notice the rear headlight and numberboards. The round holes are trains for when they overfill the tender or water slops around. I need to look at some more prototypes, when you look at the model, it just looks like something is supposed to go in there. 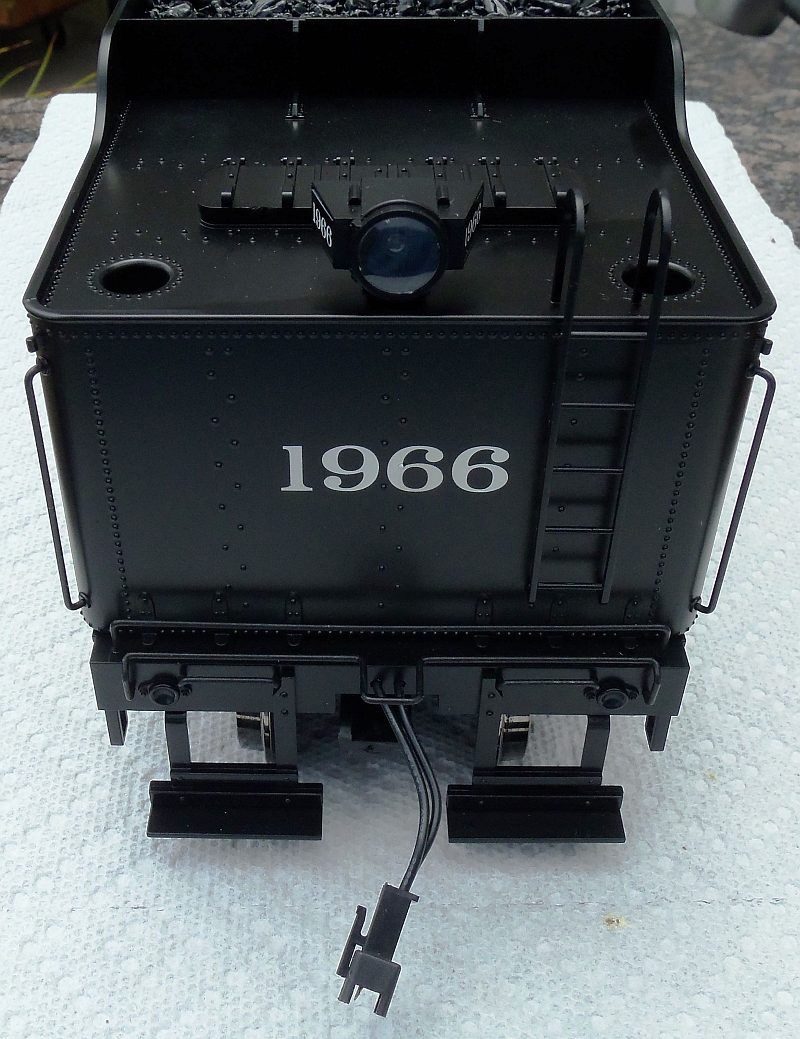 Top view of the tender with the coal load removed, and a QSI installed. Why the heck they did not put it at the front, and leave clearance for a nice speaker. As it is, you cannot see 2 more connectors used for many sound systems, they are under the tender shell on the right hand end of the circuit board. The onoff switch at the upper right that is not labelled is the motor on off...

Left (fireman's) side of the tender. Nice looking rivet detail and paint.

Right side of the tender, notice the 4 small hooks in the tender frame?

Warning!, there are 4 small hooks on the right (engineer's) side of the tender by the frame. I believe you can break these off easily be laying the tender on a hard surface, or catching them on something. I have not broken mine (yet). 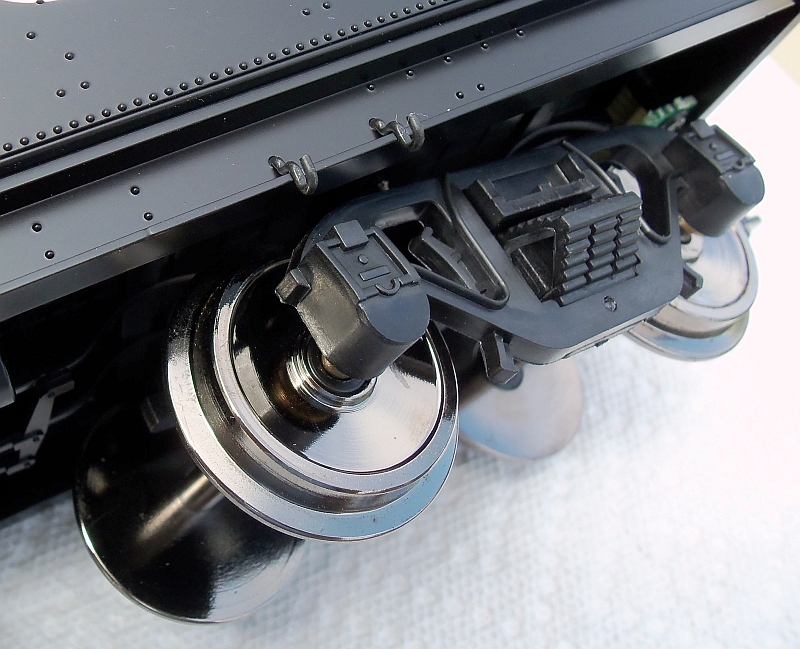 The tender is disassembled by removing 6 screws from the bottom. Note: be careful when working on the tender upside down. Merely placing it on a flat surface can break the small control lever near the coal bunker. I placed the tender on the removed coal load cover to avoid breaking the little "two pronged control" seen in the lower left of the below picture:

View of the underside of the tender. Notice that there is a second hole in the drawbar, and you can unscrew the pin and move it to the second hole for closer coupling of the tender and the loco?

There are 4 screws at each corner, and 2 more on each side by the rear truck: 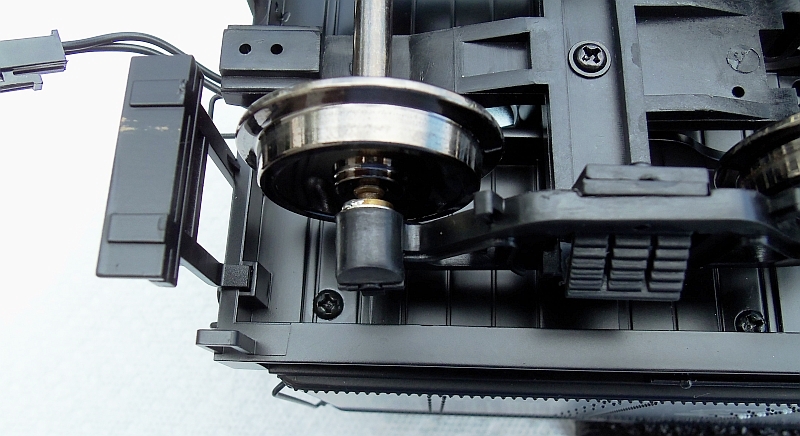 With the shell off, you can see the placement of the board in relation to the speaker, hardly any room for a nicer speaker:

There's a small, polarized connector to the rear headlight. If you change the light to a LED later, then you won't have the danger of plugging it in the wrong way. Weird that LEDs were not used in the first place. The blue tape you see in the picture is holding the 2 metal clips that secure the coal load. The spacing of the metal clips is such that they interfere with what is placed in the socket. See the picture below: 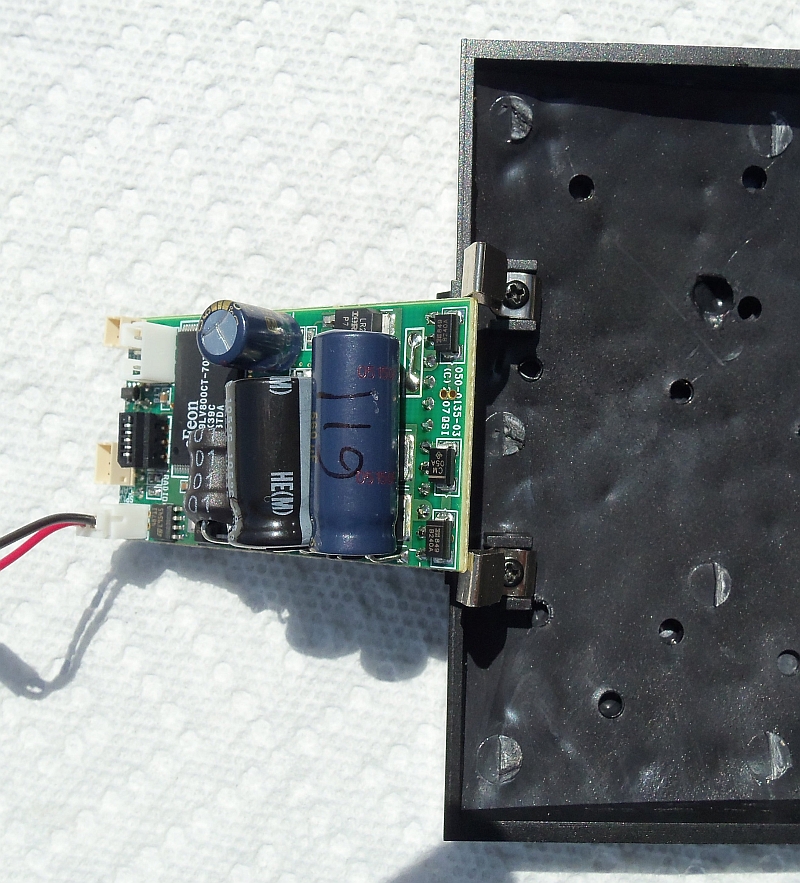 Here's the top view of the tender electronics: