Switches, points, all different names to change the direction of your train

Turnouts are the most important and problematic part of your layout. Most other problems with trackwork are easily solved.(There's a switch off to the right hand side, as train went to the left, one car mistakenly took the switch). 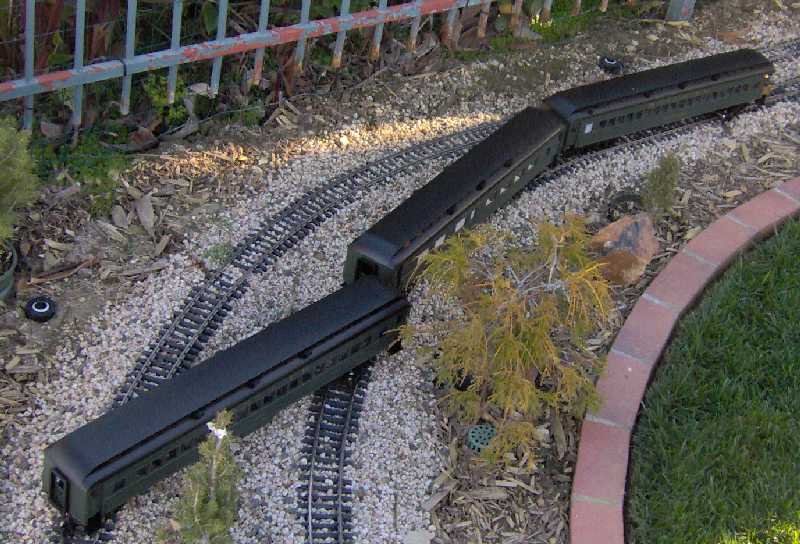 My best advice is once your locos and cars are gauged properly, and your track is reasonably smooth and level, work on your turnouts and you will reap the benefits.

Turnout (switch) (points, if you are in England) Definitions

In other hobbies, the term "turnout" is probably the norm, to distinguish between electrical switches.

In the prototype world, a switch is a switch, unless you are in England, then they are called "points" (which is pretty goofy, since points is are one of the components of a switch.

A switch is basically a construction of rail parts that allows 2 or more tracks to combine to one, or vice versa.

In most switches (except wyes and 3 way switches) one "path" is straight and one curved.

The outer 2 rails of the switch are called the "stock rails", and you can call one the "straight" or "through" stock rail, and the other the divergent rail. (avoid calling it the curved rail, since there are curved turnouts also, and not all turnouts appear to have a curve) These rails can also be called "main rails".

On the 2 stock rails, there are 2 smaller pieces of rail called "guard rails". The purpose of them is to keep the wheels on the proper course as the tracks "cross" each other at the frog. The back of the wheel flange is limited in travel by the guard rails.

The moving assembly inside that actually causes a train to take a certain route is called the "points" and those rails are also called point rails.

The part where the tracks "cross" each other is called the "frog".

The frog actually has several components:

Looking at the frog, you will see space where the wheels are not supported as they roll through. In real railroads, the angle of the frog is typically so slight that SOME portion of the wheel is always supported either by the wing rails, or the frog itself.

There is a class of frogs, called "flange bearing" where in this gap, the flange of the wheel will roll in the "flangeway" between the frog point and the wing rails.

Interestingly, since model trains have such wider (sloppier) tolerances, may manufacturers make "flange bearing" frogs. This construction has good and bad points, but the important point is that now your flanges need to be very consistent in depth, or nothing rides smoothly through the frog.

On of the most misunderstood things about switches is understanding the intimate relationship between back to back wheel spacing and the guardrail flange widths.

The guard rails are the ONLY thing that keeps the wheels going down the right path through the frog. When a wheel goes into the space just before the frog point, it could go the wrong way at this juncture, the only thing keeping it from moving sideways at this "wide spot" is the back of the wheel on the guardrail.

Read the last sentence over again, and if you do not get it, go get a single wheelset and roll it through a frog and try to make it go the wrong way, you will see the back of the wheel is bearing against the guardrail.

In models, often a switch is not made to prototype geometry, especially really tight ones. Prototypel turnouts diverge at a fixed angle, meaning the rails are straight from the point of the frog on out.

In modeling, often space is so tight, the diverging route of the switch is curved to match curved track expected immediately afterwards.

Calculating the frog number yourself:

Often these turnouts are specified in diameter, like the Aristo 4' turnout, and the Wide Radius turnout which is 10' diameter.

LGB numbered it's curve diameters R1, R2, etc, so the switches are expressed as matching these curves.

More "gentle" switches are given a number, a common "high speed" switch in G scale is a #6, which is related to the angle of the frog in degrees, which is the angle of the diverging route in relation to the straight through route.

The frog number is the ratio of it's length, measured on the frog centerline, to it's width. Another way is the number of inches in length necessary to spread one inch in width.

Note: typical mainline switches are often around a #20 on a standard gauge railroad.