Ohmigod! My range is indicated at 2xx miles and it should be 2yy miles, should I freak out, should I take the car to the dealer, do I sue Kia? Do I commit suicide?

Jeeze, this is the #1 most asked question. Feel free to establish yourself as a (use any derrogative adjective here)  on the forum by asking this question.

The "range" is an ESTIMATE, calculated by an IMPERFECT ALGORITHM. So it will go up and down, and will be over-sensitive to temperature, and your last high speed joyride.

Let it average out. The number you see when delivered is normally worthless. Go by the range you actually get and the % of battery left.

The KIA Niro has great range, there is nothing wrong with your battery. RELAX.

The Niro has a huge number of features, and not all of them are logically implemented, and some are quite confusing. Read The F*$# Manual first! Yes it is big, but it does have a table of contents and an index. It is indeed poorly translated, and somewhat hard to understand, but at least read about the feature first. You will probably figure things out.

There are a number of modes you may want to set for your taste, things like the performance mode (ECO / Normal / Sport). Not all these modes "stick", and they go away when you turn the car off. It sucks. You have to live with most of them.

Car keeps waving it's mirrors as I walk by

When you lock the car, the mirrors fold up against the car. But when you walk close by, they unfold, to "welcome you"... Idiotic, my car is in my driveway and I walk past it a lot. You can turn this off.

OK, this is weird. In the USA, most cities have an ultra-low cost time to charge your car, usually called off-peak, or super off peak. To set up the charging schedule, you use the phone app. You MUST set a departure time to have this work. Don't fight it. I set a departure time right after the off peak time is over. This and setting the off-peak window pretty much forces the car to charge fully and in time. I'll put more in here later.

Ahh jeeze. The number of people who purport to be experts on the forums! The bottom line is charge your car every so often, you do not need to top up every night unless you are running the car way down every day. This is a liquid cooled battery, so it's not the same as the non-cooled cars like the Nissan Leaf, or your laptop, or your phone. I charge mine when it gets below around 170 miles, but QUIT WORRYING about wearing out the battery and going on some campaign to only charge to 80% and charge lower if you don't use the car for 4 days.

There's so much well intentioned idiocy out there it is unbelievable. Someone will bring up the "common wisdom" that lithium ion batteries should only be charged to 70% for storage (meaning like months or years) and say you should only charge to 70% because you leave it overnight and the battery is INSTANTLY damaged by charging to 100%

Likewise anyone telling you that 100% is bad is nuts. First you NEVER get to charge the battery to 100%, just like you can never discharge it to zero.

Just ignore these people, charge the battery when it gets low, and let it fully charge. By the time the battery quits 5-7 years from now, a replacement pack will be cheap.

My 12v battery is bad/weak/not charging

This is apparently common. People freak out and buy separate chargers, even before they buy the vehicle. The 12v battery is recharged by the main battery. Turn on the "battery saver" function (RTFM) and the car will recharge it if it goes too low. Normally this happens for one of 2 reasons, the most common is someone running the battery down with something plugged into the 12v or 5v sockets. The other is either a bad battery or indeed something wrong in the electronics.

I see all kinds of posts on this, and after haveing EV's for 7 years, it has not happened to me. If the battery does not charge, then take it to the dealer, don't leave stuff plugged in, and leave battery saver on. The system works, and if it does not, have it fixed.

Oh my God! Here's another example of where the wannabe chemists pop up. There is no REAL magic in the coolant for the battery system, it's just stupidly expensive from the dealer. Most of the later EV's have the blue coolant, but some have orange. This is in the manual. What they do not tell you is the specification for the coolant.

It is a "low conductivity" coolant, and this means electrical conductivity. The idea is that if somehow one of the battery packs gets a leak, the fluid is not going to help a short circuit.

Zerex blue for asian cars works and meets the Kia spec, you just have to dig a little, there is a Kia bulletin that gives the specification number, and then you can see that Zerex blue meets that specific specification. It's really bad that the Kia manual does not give you this specification number directly, since you should change it every 3 years, and I think the capacity of the system is 13 liters.

Here's the spec from Valvoline on the blue stuff: https://5.imimg.com/data5/DC/XO/MY-60736075/zerex-valvoline-antifreeze-coolant.pdf

There's also some people that scream "don't add water", so they believe that the coolant is not water based. Again, wannabe chemists apparently. You can see the "do not add water" on the bottle. Well, this is because these coolants use highly de-ionized water to help avoid corrosion AND to keep it non-conductive. What consumer has 99.99% pure de-ionized water? NO ONE. Therefore NO ONE should add water.

Even beyond that, it's like any coolant, adding water dilutes the stuff you have. You do not want to dilute this, or any coolant.

Kia part number is LP040APE05EVK0, but still looking for the document stating what standard the blue fluid is, but I suspect it is in the Kia service manual.

What motor do I have?

You can see the model of the motor by turning the steering  wheel full left, and then peering in the wheelwell opening to see the tag on the motor: 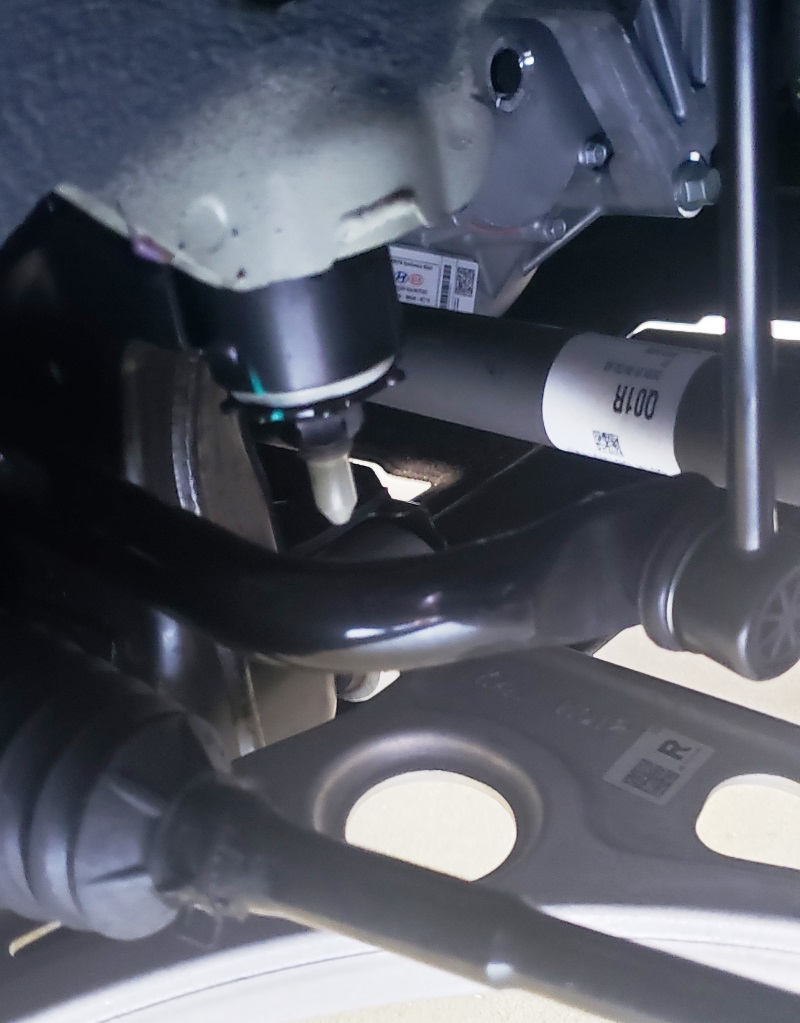 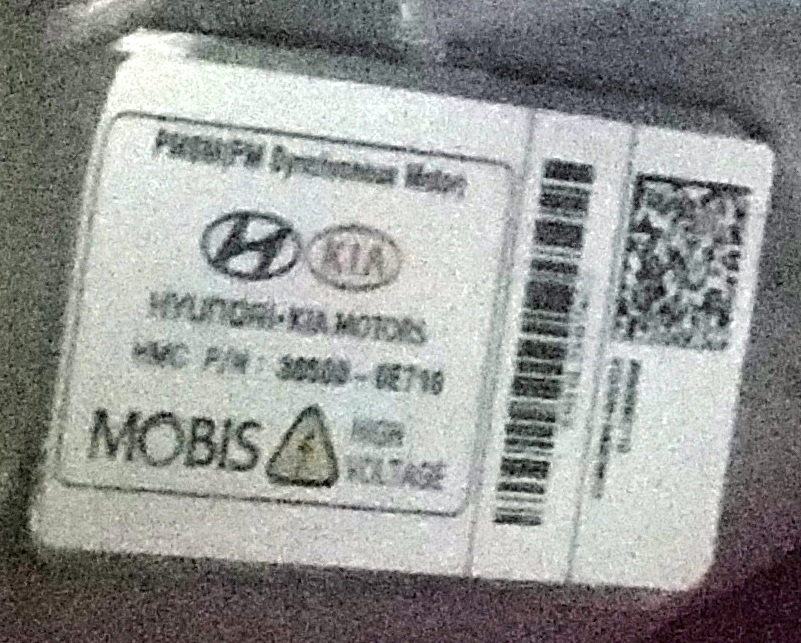 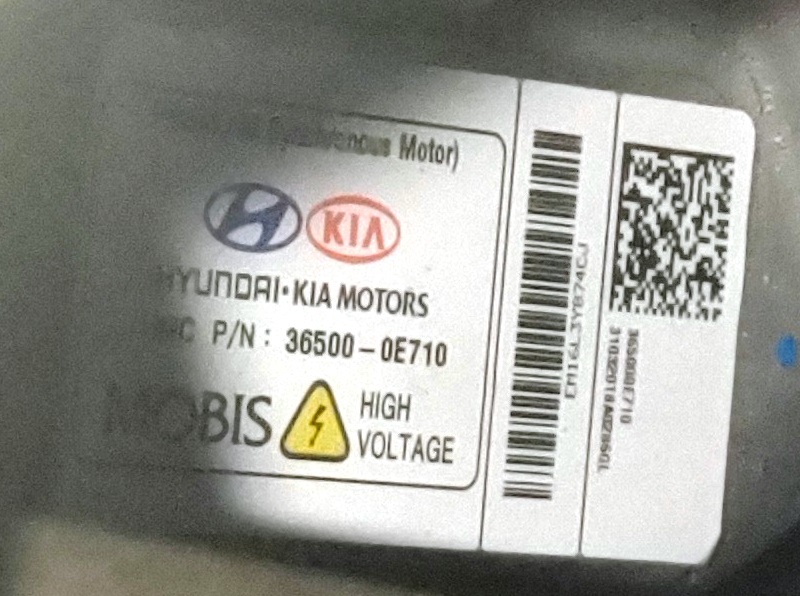 I purchased a service manual for my Niro EV. The service manual indicates that there are two plugs on the drivers side of the reduction gear just under the left drive shaft, the bottom one is for draining the oil and the top one is for filling: you have to remove the "Under Cover" to get to the plugs. To "Inspect" the oil all you have to do is stick your finger in the filler hole and make sure you can touch oil.