Just got done clearing out a strange problem. I recently modified the "WYE" that comes from the mainline to the switchyard. I had not re-instated the autoreverser for a while (because I left it's case open to rain, and blew it up). 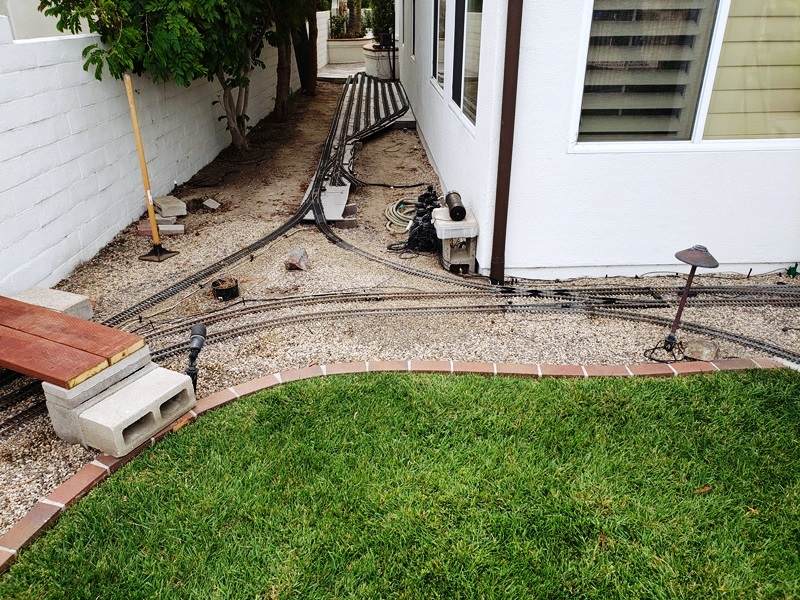 So a few weeks ago I connected the autoreverser and it did not work... hmm... turns out that I had 3 feeders unlabelled, and the one I thought was the switchyard was not. OK, now all labelled... Now it sort of works but usually the loco stops, the autoreverser indicated a short, and then after 2 seconds (internal timer) cleared and resumed... weird.

So today was the day to figure it out. Changed the trip current on the autoreverser, but that did not seem to make much sense, because it is supposed to reverse lightning fast, and also has a circuit breaker, so it was by appearances tripping the breaker, but after reset it was reversed.

Hmm.... I noticed only one "leg" of the WYE was having this issue, the other leg was fine. This leg is going through a crossing, which should not have made any difference, but then a small light went on in the tiny brain, maybe the detection of the "need for autoreversing" was being detected as a short. The gears were turning but in the background.

OK, let's test the autoreverser. By leaving a meter in the rails, I can see when power is there, i.e. also a short will show zero volts. My autoreverser has the optional audible alert to hear when there is a short, vs. autoreverse.

So, I started shorting one rail on one side of the insulating joints to the other. Wait a minute, a lot of these rails in the crossing don't seem to have any effect. Get the meter, NO VOLTAGE on all the internal rails that form the "diamond"... hmm.... ok, pull the crossing and look. There are NO jumpers inside, only the outside "entry" rails have power.

So, thinking about how the autoreverser might work, if I was to program the code (it is microprocessor driven), I would look for both rails being connected backwards at pretty much the same time.... hmm... if you only "reversed" one rail, maybe that would be interpreted as a short, not the need for autoreversing, since the other rail is dead through the crossing.

Took up the crossing, and made power jumpers (with split jaw clamps) to all 4 internal rails, back in place, works flawlessly, not the smallest hiccup when autoreversing.

been a good day, lighting up a cigar...