A nice looking 4-6-0. Pretty close to the popular Baldwin locomotive. I'm modeling Santa Fe, so I had to buy an undecorated one.Mine came in the red Spectrum box.

The 10th Anniversary version was shown in 1999, in a separate "Spectrum" catalog. They were mentioned in the 2001 catalog, but the pictures in the catalog show plastic side rods.

What I bought was in a red box with "Spectrum" on it.

The "Annie" (because Bachmann calls it their "Anniversary" edition of their popular "Big Hauler" has 2 different versions of valve gear. Certain road names and the undecorated one have the more complex Walschaerts valve gear, some of the others have the more simple Stephenson valve gear. I like as much "monkey motion" as I can get.

I've found some pictures of an ATSF loco close in configuration, the 533, which has the same cab window configuration. The bell is in a different place, but the overall look is close.

The Anniversary Edition can be either the version 5 or the version 6 chassis...there were some Costco/Sam's that were contracted to be a price point (we need to talk) and at one point Kader dragged out the old molds to satisfy that.

In the photo, see the small rivets on the smokebox? Not pie plates? Anniversary.

Metal piping (and cooling coil on outside of air tank).

All specific to "Anniversary" design.

Notice the top of the steam dome is gone, with whistle and pop valves.

The loco has 9 screws to take off the boiler.

When you get all the screws removed, the air tanks on each side pull straight out. There is also an "air line" made from wire that goes between the two tanks, with a little "bow" in it to clear the boiler.

Be sure to remove the ends of the "brass" handrails that go into the boiler. Just pull them straight out, don't remove the bottoms.The tender has screws in the 4 corners.

Now the boiler should be free to move.

Everything else comes apart pretty easily.

The smokebox front just pops out, held in by 2 tabs in the boiler. Ease the bottom one a bit and carefully rock the front out. Now you can cut off the switch wires or rewire the switches under the front cover. This is the easiest way to do a DCC installation.

There are two switches, a "direction" switch and a "smoke" switch.

The "direction" switch on the smokebox has 4 wires coming into it. Remove all 4 from the switch. Now you need to find which two of them are the track pickukps. On the locos I have worked on, there was no consistency of heavy vs. light wires or red vs. black.

Use a ohmmeter to find the left side (fireman's) track pickup and the right side (engineer's) track pickup. Hook these up to your decoder. Then connect the other 2 leads to the motor leads from the decoder.

Test the loco. If it runs backwards, swap the two leads to the motor.

I also noticed it looked like there was no dropping resistor on the rear headlight, at least in the tender. We checked on our last install and did not find the resistor in the tender either, but it really appears to be the same golden led as the headlight. I figure there is a dropping resistor somewhere in that pair of wires in the loco. It's connected to the motor internally, so if you leave it alone, it will only go on in reverse when the loco is moving as mentioned earlier.

The headlight is a led with a 1k resistor in series. It is wired to the smoke unit switch. Remove the wires from the switch and wire to your decoder. I added a 600 ohm resistor to this, since I use a higher than normal track voltage, so I measured the current at a normal dc level, and figured 100 ma was about right, so the extra resistor kept the current in bounds.

Here's a schematic of the loco: 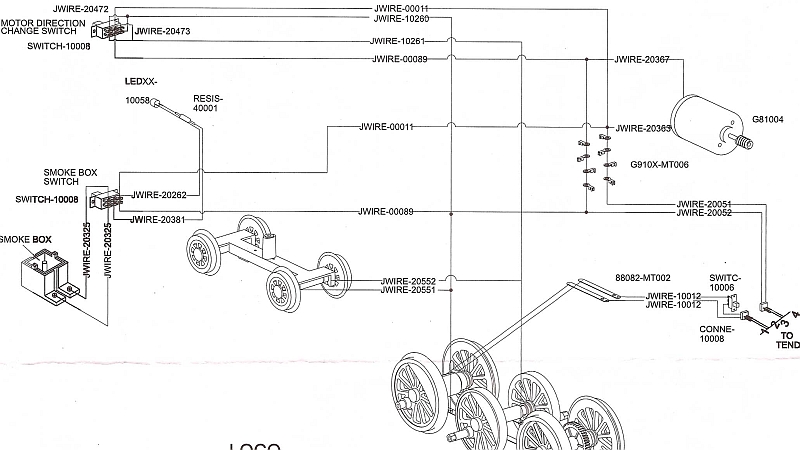