There are 4 long screws on the bottom, at the ends of the trucks. Remove these and you should be able to work the chassis out of the shell. Be sure to open it carefully so you can disconnect the connector between the chassis and the body shell.

The picture below shows the shell:

Note in the picture above, this unit has a speaker for the sound system. You can see the 2 boards for the lights, and the black wire from the trolley pole.

After you have removed the shell, here's what the interior looks like:

In the picture above, note the 3 terminal regulator screwed to the chassis.

In the picture below, you can see that the main circuit board is between the chassis and the plastic subframe that has the seats.

This subframe can be removed from the metal chassis. There are 4 screws to remove, and the outer 2 screws are shorter, and the inner 2 screws are longer, right next to the center where the socket is. It might take some gentle persuasion to remove the floor unit, there are some bosses on the bottom that engage holes in the metal chassis.  Also the handrail near the front steps is pressed into the chassis, pull it up and out gently.

Unscrew the headlight board so the wires can stay with the chassis.

The pricture below shows the floor removed from the chassis:

The main board is finally revealed, and can be released with 2 screws. Note: all wires can be unplugged EXCEPT the colored ribbon cable worked into the serpentine slot in the chassis on the left.

This is a new design motor block, there is a small, almost toylike motor with a reduction drive. Aristo reports that Sanda Kan uses these in HO locos. I would be happier if the end was not all plastic, but so far, no running problems, nor do I expect any.

In the picture below, I have removed the covers of each motor block. There are 4 screws on each block. Note well: the covers go in in a certain direction, and the blocks are reversed from each other:

Looking at the picture above, see the "reduction shaft" with the 2 gears on it. Look at the differences between the left and the right block, they are turned 180 degrees from each other. The front of the PCC is to the left.

You can also see the brass strips that the axles reside on.

Below is a closeup of a motor block with the axles in place: 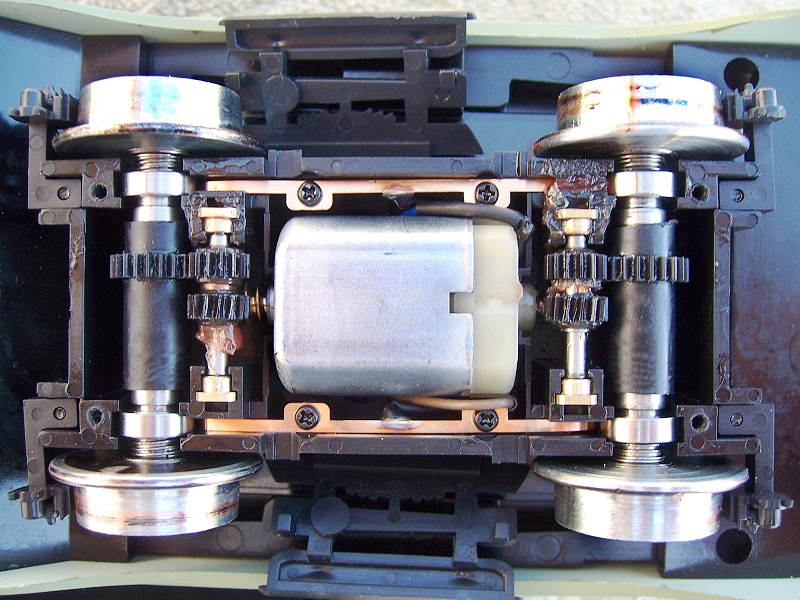 In the picture above, you can see the two brass strips above and below the motor that collect power from the axles, they "dive" under the ball bearings on each end of each axle. Also note the recesses for the ball bearings in the motor block. When reassembling, make sure you have them in there, and to be sure it's right, the axles should slide from side to side easily and center.

In the picture above, I have already modified the axles to meet NMRA standards, so the springs between the wheel and the bearings are compressed (because the back to back spacing was reduced NMRA/G1MRA specification).

In the picture below, with the axles removed, you can see the ends of the brass strips diving down into the space for the bearings, so that the bearings make contact for track power pickup. 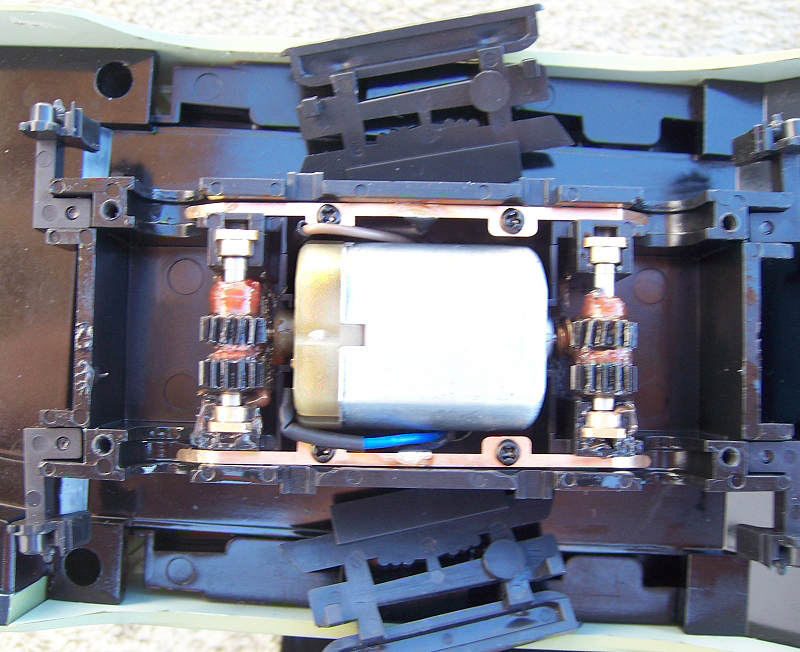 Hoo boy. Well a different type of socket, and Aristo violated their own specifications of the space reserved around the decoder. The socket is also a lower profile, so the legs of other decoders will not allow the decoder to seat completely.

This makes it so only the Revolution will fit and allow the bottom cover on. What a surprise. There's a set of jumper pins right under the socket that can touch the bottom of a decoder and short things out, and a small electrolytic cap there too.

The first thing to attack is the set of jumper pins. There's 5 pins on the board and the top 2 pins nearest the slide switches had a jumper on them:

on the back side the pins were identified as -, DAT CLK R and +. The 2 that were jumpered stock were the - and the DAT.

Below is a picture of the socket area: note the low profile sockets. In this picture, the jumper pins have been trimmed flush with the carrier. 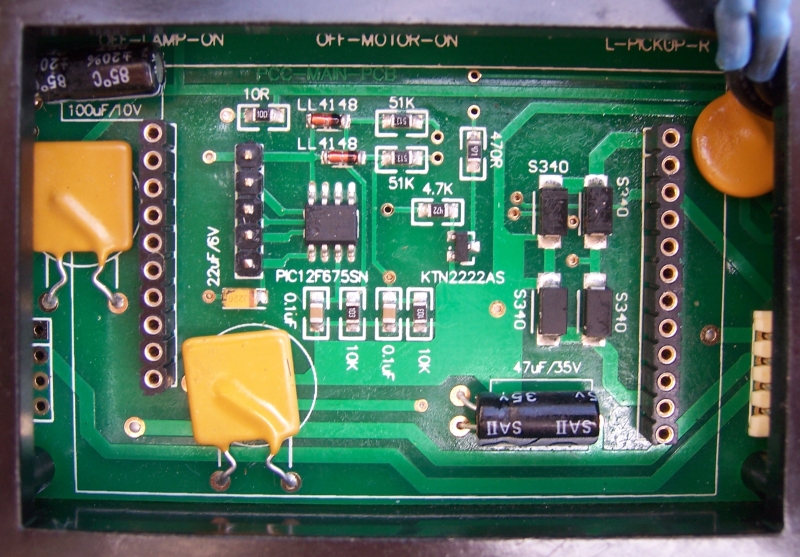 The electrolytic capacitor in the lower right sits above the socket so it interferes with decoders also.

Below is a closeup of the 47 microfarad, 35 volt electrolytic capacitor: 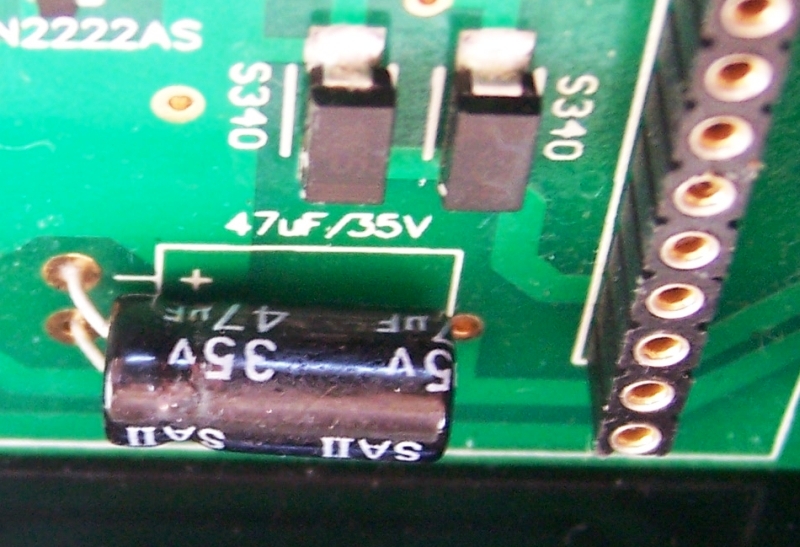 Silly, this should not have been done, and likewise the jumpers clearly interfering with any decoder.

So, the first thing to do is get that capacitor out of the way. I removed the main board, unsoldered the cap, and soldered 2 wires long enough to get past the end of the board. See in the picture below: 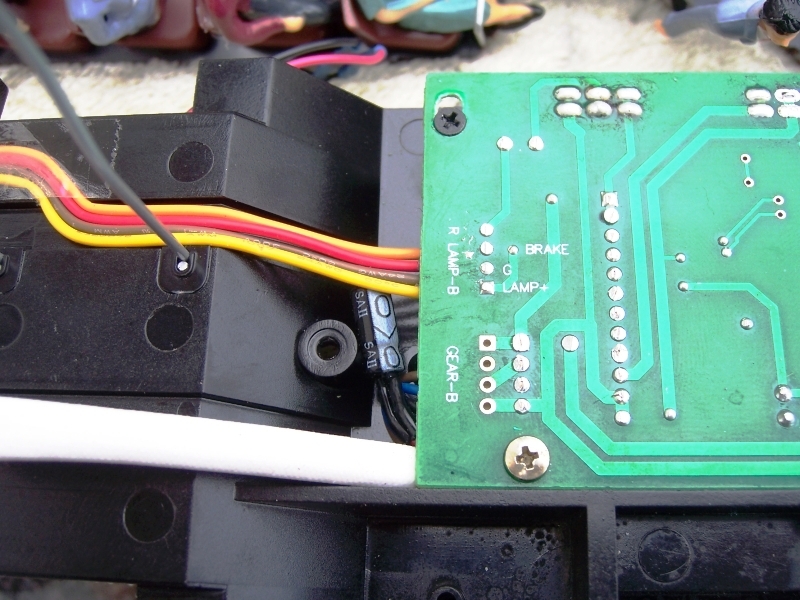 This also reminds me, the main board was only held in place with 2 screws, on the "switch side" of the board. I added the 2 missing screws, and also touched up bad solder joints on all 3 slide switches. Several people had electrical problems with these switches, when I resoldered them, the pads bubbled quite a bit, so I suspect a problem with bad flux or contamination on the lugs of the switches. That would also explain the electrical problems people were having. Aristo, don't go so cheap next time!

Below is a picture of a QSI installed in the socket, now you can clearly see how the non-standard socket will not accomodate the standard length pins on the QSI.

Clearly after moving the capacitor, the pins on the QSI can be trimmed. You should measure the gap and trim just slightly less than the measured gap from the end of each pin. I found the gap to be about 0.080", and laid a strip of  0.10" styrene on the plastic block on the QSI as a guide to trimming the pins. After trimming them, I used a light touch and a sanding drum to taper the tips of the cut pins just a bit.

In the picture below you can see the result:

And with that, now the stock cover on the bottom of the chassis can be installed:

Since the speaker is inside, it helps to let the sound "out". I carved out the 2 rear windows on each side and that was sufficient. You normally cannot even notice these are cut out, I used a flash to show how close I filed the windows to the body. 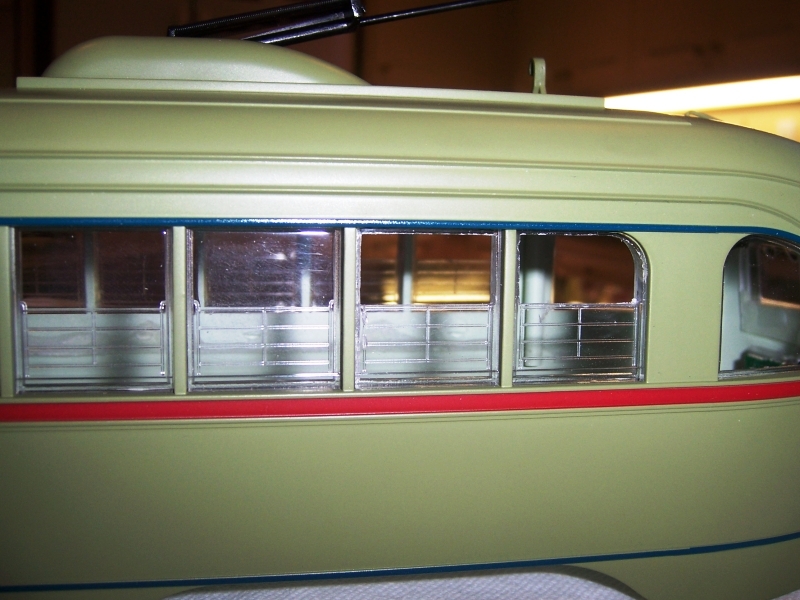 There are two lighting boards with associated dropping resistors in the body. They are normal 3mm LEDs.

As you can see in the picture belows, they are typical point sources, very little dispersion, and too bright and blue white. Why in this day and age someone can't just order "warm white"? Update: Aristo says that they will evaluate warm white LEDs in their next production run, that they used the same as the RDC. (the RDC has smoked windows and I believe prototypes has fluorescent lighting)

In the picture below, you see my first try at changing the color. The problem is that the lights are so bright, and so undiffused, that the blue white light still shines through!

Here's my second attempt, I took the above film and spray painted it with orange paint. I cut the plastic about 3-1/8" wide and it tuck just under the plastic windows, where there's a small ledge. Notice I had to notch it around the doors. Notch it just enough to clear since there are lamps near the doors.

The picture below shows more dispersion of light and the laser blue white is controlled.

And here's how it came out: