The following is a discussion of the new Aristo, ART-45202, Fruit Growers Express (FGE) insulated box car.
A rationale based on prototypical cars is presented for equipping it with Aristo's Barber type roller bearing trucks.

Aristo-Craft' FGE "RBNX" Insulated Box Cars are shown below with road number 80045 in the foreground and number 81329 still in its box behind it. 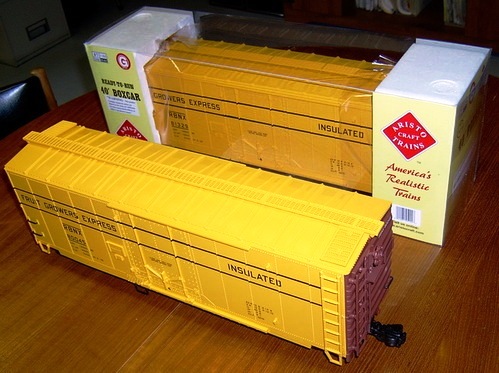 The factory installed Bettendorf type trucks can be seen in the below picture.

Shown below is the brake wheel bulkhead end view of the FGE car.
(Note the bulkhead ribbing appears to be the same as the new Aristo ATSF double door box car as seen to the right.) 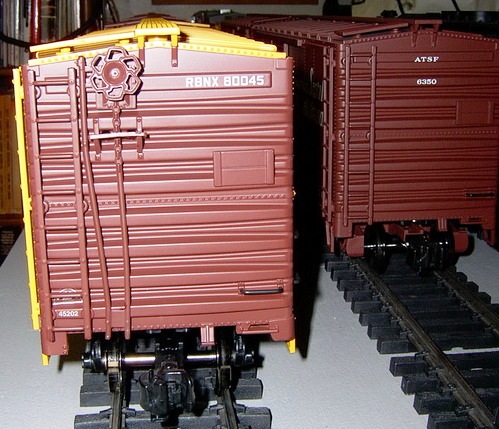 Shown below is a closer view of the plug door area.
Note the "gusset" reinforcing details at the bottom left and right corner areas of the door. (This will be referred to later.)
Also, the scripted "AX 8 - 68" at the left appears to date a prototype car as August 1968. This date would seem to be too new for such a car to include the old Bettendorf truck type that the Aristo provides with this car. (This will be referred to later.) 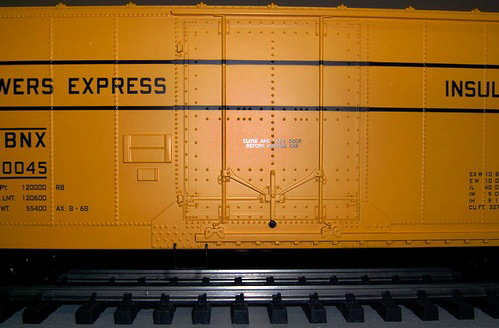 Shown below is the factory installed Bettendorf truck having the standard plastic wheels.
Note the split bolster post on this example plug door box car floor is like the first production run of Aristo double door box cars! These cars share the same floor subassembly. 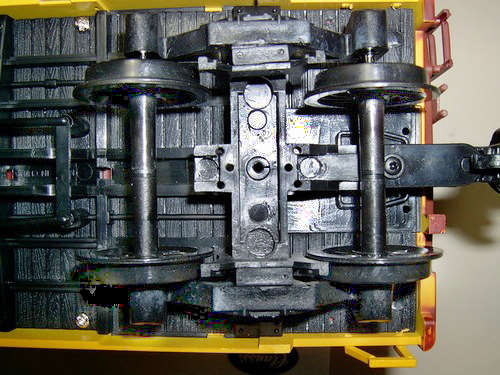 Shown below is the floor with the Bettendorf truck removed 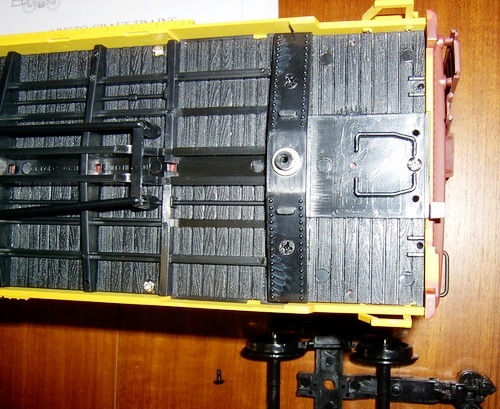 Selecting what type of wheels and trucks to use: 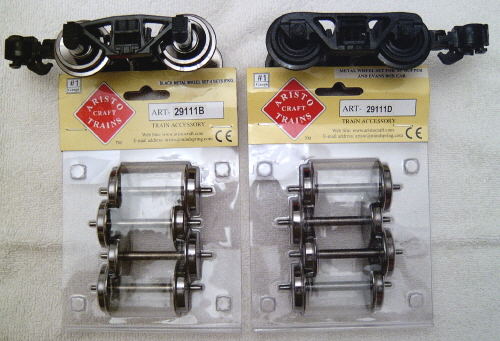 In the case of the FGE cars, I chose to use the Barber type trucks (The rationale for this will follow), but since I had several Barber truck spares having plastic wheels,  I chose to retrofit these trucks with Aristo's ART-29111D wheels.
Note that the "D" suffix is important to specify should you purchase these wheels as these have machined down hubs to accommodate the installation unique to the Barber type truck. Whilst other wheels can be adapted with additional effort, doing so is not germane to this topic. If you don't have any Barber type trucks, it is best to purchase them inclusive with metal wheels. Aristo lists a Barber truck bubble pack that includes a pair of trucks having metal wheels (ART-29100). The past examples I got included the couplers with them. See below picture:

An example truck assembly is shown below having plastic wheels that I replaced with Aristo's ART-29111D metal wheels before installing it on the FGE car.

Note the scripting embossed on the truck side frame includes "Barber S-2" as shown in the close up view below. (This will be referred to later.)

Shown below is the Aristo Barber truck placed over the floor bolster pivot post.
It can be seen there is a noticeable space between the post and the hole in the Barber truck bolster span since the hole is bigger than that of the Aristo Bettendorf truck. 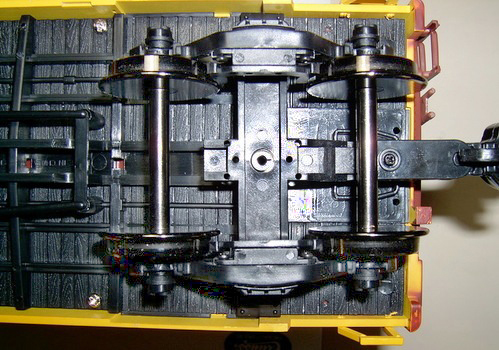 I measured the post diameter to be about 0.238 inch and the Barber truck bolster span hole to be about 0.275 inch. This results in a gap of 0.037 inch with the truck pushed to one side as shown in the above picture.
Thus, to eliminate cumulative slack for providing optimal operation when pulling many like kind Barber truck equipped cars - a sleeve with a wall thickness of about 0.015 inch having an inside diameter of 0.240 inch would be very desirable to use.
In this regard, if Aristo decides to offer these cars with their Barber "roller bearing" [emulated] type trucks like I have shown & described here - installing such sleeves would be a professional necessity, and this may also serve to constrain any split floor bolster post as a benefit, too.

Shown below is a corner view of the newly installed Barber truck: 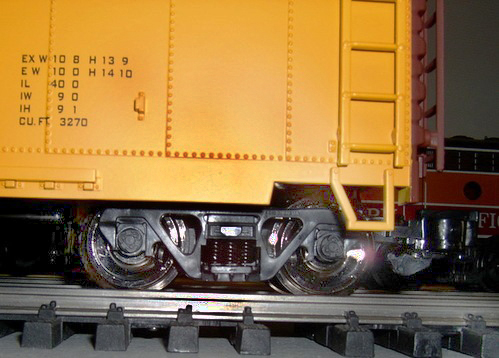 Shown below is an overall view of the Aristo FGE insulated box car with its retrofitted Barber trucks having metal wheels. 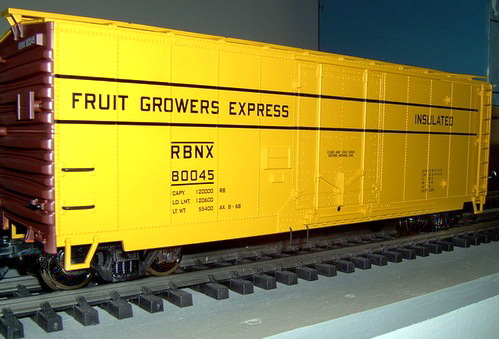 Shown below is the 2.71 lb overall weight of the FGE car retrofitted with the Aristo Barber trucks having metal wheels:

The FGE cars operated within a train:

For comparison, the older style ice bunker FGE reefers are better seen in the below picture:

When I discovered I used up all my ART-29111B metal wheels that I initially considered for retrofit into the FGE car's Bettendorf factory plastic wheeled trucks, I decided to look at some books to see if using the Barber roller bearing type truck is prototypical.

Surprisingly, I discovered these FGE insulated box cars were prototypical with either Bettendorf or Barber type trucks - perhaps depending on when or where the cars were built!

The following book includes a picture of a Fruit Growers Express R.B.N.X. car with Bettendorf type trucks:
"American Car & Foundry Company 1899 - 1999"
by Edward S. Kaminski
Published by Signature Press
ISBN: 0-9633791-0-0
Page 193 shows and describes Fruit Growers Express Co. car no. 81460 as a 40 foot steel bunkerless refrigerator car with 8-foot plug doors and 50-ton trucks built in May 1955. (The trucks appear to look like the Bettendorf types on Aristo's model; however, unlike the book picture, the floor sill on Aristo's car steps up just prior to the corner foot stirrups. Also, the end bulkhead ribbing does not look like Aristo's model.)

Similar to the described book pictured car, at the below link is a photo of a prototype FGE car #80455 that includes Bettendorf type trucks, gussets at the door bottom corners, and having a straight floor sill. Also note the RBNX reporting mark initials lack of "periods" (unlike the book picture "R.B.N.X.") but like that of Aristo's car; however, the "lines" above the RBNX reporting mark and below the road number are not present.
In this 1972 photo, the "lines" above and below the reporting mark have been painted out:
http://www.rr-fallenflags.org/misc-frt/rbnx80455awb.jpg

Also, at the below link is a 1966 photo of a prototype FGE car #82204 that includes Barber type trucks, gussets at the door bottom corners, but with a straight floor sill. Note the RBNX reporting mark initials lack of "periods" like that of Aristo's car, and the "lines" above the reporting marks and below the road number are like that of Aristo's car.
http://www.rr-fallenflags.org/misc-r/rbnx82204ajs.jpg

(both links above courtesy of the www.rr-fallenflags.org)

As to roller bearing type trucks, see following book,
"The Great Yellow Fleet
A History of American Railroad Refrigerator Cars"
by John H. White
Published by Golden West Books
ISBN 0-87095-091-6
Page 94 shows and describes the Fruit Growers Express R.B.N.X. car road number 81800 having roller bearing type trucks - albeit with two visible springs. (Aristo Barber roller bearing trucks have 3 springs.)
The description in the book below the car's side view picture states the following:
"There were refrigerator cars that weren't actually refrigerator cars, such as the RB class which had neither ice bunkers nor mechanical cooling units..."
In this regard, Aristo's car model conforms to this configuration. The picture shows ladders and grab irons like that of Aristo's model, but again the floor sill differs having a straight line all the way to the foot stirrups at either end of the car.
The floor sill on Aristo's car steps up just prior to the corner floor stirrups as can be seen in the pictures previously shown. Moreover, the "gussets" at the bottom corners of the plug door in Aristo's model are not there in the book picture.

With this in mind, see book:
"Pullman-Standard Color Guide to Freight Equipment
The Decade of Color 1960 - 1970"
by James Kinkaid
Published by Morning Sun Books
ISBN 1-878887-42-4
Page 98 shows and describes a FRISCO plug door box car built by General American having "Barber S-2-C" trucks.
Though this car is NOT an FGE car and it may be a longer car, it closely resembles the Aristo car model for both its floor sill contour and the bulkhead end ribbing design as well as having the gussets at the bottom of the door corners. However, ladders take the place of Aristo's model's grab irons.

I believe the information described in the book "Pullman-Standard Color Guide to Freight Equipment The Decade of Color 1960 - 1970" justifies the use of the roller bearing type trucks on a car like the FGE - based on its floor sill contour, end bulkhead design, and the gussets at the bottom corners of the plug door of the car. This appears to establish the very same physical attributes of the Aristo model to be like a later prototype car having Barber roller bearing trucks.
Given this it may be that such a car with the physical attributes of Aristo's model was not prototypical of an FGE road name, but more befitting, for example, to the Frisco road name. (Book page 98 shows and describes a Frisco plug door box car built by General American having "Barber S-2-C" trucks.).

With respect to the S-2-C truck cited in that book, see below link for
"Freight Cars Illustrated, Volume 9".
On page 5 are shown casting monogram symbols, including one for "G" (meaning ASF) and another symbol for Birdsboro.
Aristo's Barber roller bearing truck has the "G" monogram - albeit with a casting date shown as 3-81. However, on page 6 is shown a picture of a "Barber S-2 70-ton Birdsboro Cast 8/66" that looks like Aristo's truck with 3 visible springs. The caption includes the statement, "Here's a roller bearing Barber S-2 truck cast by Birdsboro at the Birdsboro, Pennsylavnia foundry 8/66...."
http://fcix.net/Documents/vol09.pdf
It looks like such trucks were available prior to 1968 and could have been retrofitted to early cars or employed on new cars prior to 1968.

Given the above reference material and that the Aristo FGE modeled car is of an apparent scripted date of "AX 8 - 68" (August 1968) where "AX" in place of the customary "NEW" may suggest a rebuild or major service, I believe it is prototypically appropriate to retrofit the car with Barber roller bearing type trucks.

As previously stated, I noticed from the book pictures of the FGE cars is the RBNX scripting is actually "R.B.N.X." - having the periods after the letters. Aristo's car model does not include the periods, and the picture links do show FGE cars without the periods.
(I have yet to locate pictures of the Aristo model's road numbers of 80045 and 81329.)

This topic is meant to be regarded in a constructive way - not a criticism with respect to the Aristo FGE car or the choice of trucks employed on it - or for that matter, other road names of this 40 foot plug door type car.

Rather, I have provided a rationale for anyone - including Aristo, to seize upon as a prototypical justification should the choice be made to use roller bearing type trucks on these cars in addition to using the standard friction bearing type trucks they come with.

In this regard, though the prototype pictures in the links do show example features of the Aristo model like the grab irons and the most accurate reporting marks / graphics to be like that of the prototype FGE car, I have presented information that justifies the use of the roller bearing type trucks on the FGE car based on its floor sill contour, end bulkhead design, the gussets at the bottom corners of the plug door, and the date of the car that can establish the very same physical Aristo model to be like a later prototype car than the examples shown in the picture links.

As such, I believe Aristo would be in an advantages position to market these 40 foot plug door cars in both their friction bearing (Bettendorf) type trucks as well as their roller bearing (Barber) type trucks. Perhaps the car could be promotional packaged with both pairs of truck types with metal wheels included on one of the truck pairs - albeit at slightly higher cost.

That said, the Aristo FGE bunkerless insulated box car is an excellent model having quality graphics. Adding the Aristo Barber trucks with emulated roller bearings further enhance its appearance as well as its operation.
This is something Aristo may consider offering from the factory.