Read this: This site goes through constant updates and changes to organization and format. If you try to  bookmark specific pages, those bookmarks will probably go "stale" in the future. (I keep telling people to just bookmark the main page, but few people listen ha ha). I cannot stress enough to use the web site navigation tools as described below. Also: You will find that you cannot just right click and copy pages to print out. This is INTENTIONAL. The blocking to copy pages easily is on purpose so that you come back to get the latest information. I receive many questions by email, and several times people questioning me on a procedure had made a copy of a 9 year old web page. This way you are forced to get the latest information.

Navigation: Read this please, so many people just cannot find stuff and there are multiple ways to find things.

ALSO: Major pages that have more detail will have the following at the top of the page: (and this one works too)

Reminder: the more "screen" you have, the more you see

This site normally uses images 800 pixels wide. This site uses a "responsive" template system. The more pixels you have for the site, the more you will see. If you have a physically big display but use it in a resolution under 1280 pixels wide, you will not have the best experience, and many things will be pretty small. You may need to turn off any browser "bookmarks" or "favorites" to the left or right of the actual browser "area" so you can use the full resolution of your display.

If you use a narrower screen, then things will shift around to compress, and the menu at top will compress or even disappear, replaced by the 3 horizontal lines you see in most smartphones for a menu.

If you use a very low screen resolution, even on a large display, then you won't see all the detail in the pictures, and some menus may be cut off at the bottom. In this case, I suggest you select the "full" menu by clicking the 3 horizontal lines at the upper left corner. Click here for detailed stats on this site, including the monitor resolution used by visitors.

Recommendations for people new to the hobby:

If you are new to the hobby, read the site from the "top down", i.e. read the FAQ's (Frequently Asked Questions), and then the Planning and Design sections. This will answer many questions, and you will see how I decided on track vs. battery power, and what kind of control systems, and rail, etc

What is the history of the major players?

Charles Ro Supply Company was established in and it started out as a beauty shop business of 4 salons with sixty hairdressers but moved into the hobby business when Charles Ro, Sr. began selling used Lionel trains at one of the storefronts in Everett, Massachusetts. In 1972 Ro started purchasing directly from Lionel to sell them mail-order. By 1980, Ro had completed Lionel's first million dollar order. Also at this time, the company moved to a new location in Malden, Massachusetts into an old supermarket building.

In 1982, Lionel moved production to Mexico, not producing model trains for 9 months. To make up for this, Ro began selling German-made large-scale model trains that were suitable for outdoor use. Realizing their popularity, Ro began making his own large scale model trains under the name Charles Ro Manufacturing Company. In 1989, business was moved into a new building, its current location, in Malden, Massachusetts with 3 stories and over 50,000 square feet.

Until 1995, when some manufacturing was moved offshore, USA Trains were manufactured at this new location which also served as the store.

USA Trains started the offshore manufacturing with their first loco in 1995 and then all locos and the complete Ultimate series of cars was manufactured offshore, but the American series of cars, even the new "American" paint schemes today are still completely manufactured in the US. That includes the actual plastic molds which are outsourced to a US manufacturer.

Manufacturing in China was done by Sanda Kan, which was later purchased by Kader.

This is another division of Accucraft. Accucraft is unique in that they have their own manufacturing. Traditionally Accucraft made more expensive, "museum quality" locomotives, very good steam locos, nice looking electrics but with not so rugged drivetrains.

In recent history, Accucraft branched out into the 1:29 market with highly detailed, but well priced molded rolling stock, that rivals and often exceeds the detail only previously found in the USA Trains  "Ultimate" series. Some excellent locomotives were also produced, including an 0-6-0 switcher that actually had 2 runs made back to back, almost unheard of for a brass loco.

I've pieced this together from many posts on forums and research. The Polk family, led by Nat Polk, then taken up by Lewis Martin Polk (Feb 25, 1939 to April 23, 2018) is most of the story. Lewis' son Jonathan has only had a small part running the web site and some marketing stuff apparently. Lewis' nephew, Scott Polk (son of Lewis' bother Frederick P Polk) entered the scene and it was clear Scott wanted to do things differently, but this really did not happen. That was too bad, as Lewis clearly did not allow the company to change to meet the changing market. Scott tried to resurrect the company with his own company "Polk's GenerationNext" but was stimied by the Chinese manufacturer who was left holding the bag with lots of ordered, but not paid for merchandise at the demise of Aristo. Ultimately after Scott sold all this stuff, apparently Kader told him to go jump. A sad story. The only thing left was Crest Electronics, which also closed it's doors, but was bought by J.K. Kim and Navin still works there, and is called "Precision RC", and they are going well with the Revolution, coming out with new products.

1985 - Aristo-Craft started making G Gauge buildings by licensing some Delton wood structure designs and converting them to plastic kits. These were successful and later converted to fully built-up and painted items. (from Jan-Feb 2010 Aristo-Craft"Insider")

1988 - REA teamed with Aristo-Craft to make 1/29th Lionel (Lionel is a trademark of Lionel Inc. and not in any way connected to Aristo-Craft) sized standard gauge trains in 1988. Aristo-Craft had designed and started selling a track line and then merged it into their partner REA. The track had the highest percentage of copper in the market plus screwed together rail joiners. (from Jan-Feb 2010 Aristo-Craft"Insider")

1988 - "Periodically, I get e-mails about discussions on other websites and they want my opinion. The most recent one asked about our Long Steel Caboose, which is the first product we ever made. This was some 24 years ago that we designed it and introduced it in 1988. At that time our direction was to be a toy train company and we were making a scale popularized by Lionel (trade mark of the Lionel corporation) in the first part of the century. Our partner at the time under our REA trademark was Bill Lamping and he wanted to make his favorite Lionel caboose. This was the model for our first product, not a scale model of a real caboose." (Lewis Polk, Aristo-Craft forum 03-05-2010, 11:38 AM)

1988 - "The REA trade name was used during our partnership with Bill Laming and when that was dissolved we continued the line under the Aristo-Craft name." (Lewis Polk, Aristo-Craft forum 03-05-2010, 04:12 PM),  NOTE: it seems that the REA name was a partnership, and that partnership was dissolved. The 1990 REA catalog stated: "A joint venture of Polk's Model Craft Hobbies, INC, and Railway Express Agency, Inc.", the address on the catalog was 346 Bergen Avenue NJ.

1990 - Aristo-Craft and REA parted company as REA was spending its time and fortune in litigation against another company. Aristo-Craft also moves its production from Korea to China. (from Jan-Feb 2010 Aristo-Craft"Insider")

1992 - Aristo-Craft enters Chapter 11 due to withdrawal of credit line by bank due to $17,000,000 lawsuit when the bank was not clear about the outcome and thus fearful. (from Jan-Feb 2010 Aristo-Craft"Insider")

1993 - Aristo-Craft purchases most of Delton molds including C-16 Steam Loco. Nat Polk retires to Florida and Lewis and Maryann Polk take over full responsibility of the company. (from Jan-Feb 2010 Aristo-Craft"Insider")

1997 - Aristo-Craft wins lawsuit and is entitled to keep making its track, the source of a "Trade Dress" lawsuit. The judge says we had a duty to provide competition on a non-patented item. (from Jan-Feb 2010 Aristo-Craft"Insider")

20xx - ?? - Crest Electronics opens in the home of Navin, selling the Revolution and some misc parts. Navin also can repair locos, so there are some parts.

Realize that Scott did this with no help from his uncle Lewis Polk. The big problem is apparently Lewis ordered a lot of product, and it was manufactured, but he never paid for it, and it was sitting on the docks in China. Kader seems to have insisted that Scott purchase these products first as opposed to ordering what he wants to sell. Off to a rocky start, Scott is still in business in 2016, but barely. To his credit he has gotten some products other than eggliners and 0-4-0 starter sets. Some track has shown up.

Don't give up Scott!

We have made a good product, but have not developed sufficient additional items to allow us to cover our overhead. I have devoted the past 2 ½ years to try to make this venture successful and failed. We will be closing as of 7-31-16 and I will look for a day job.

Sad news, my guess is that even though the Revolution seems to have sold very well, the extra expense to make an HO version was fatal. In addition, all the inflated promises of being "beyond" DCC caught up with them, the lack of a library of sound files would limit them eventually. The price was very good, but today's market is not the same as it was years ago.

2016 - Polks GenerationNext closes about July, but silently, no announcement. Last post on the website was December 2014, last post on Facebook Feb 3, 2016. Sorry to hear this. Some back channel information was that his major backer pulled out mid year 2016.

2016 - December - The Revolution is back! J.K. Kim and Navin are running a new company and selling the Revolution. Great!

2017 - January - Precision RC is on line, selling the Revolution, Navin is there, and Revolution hardware is in stock at dealers.

for many years, this mascot for Aristo-Craft went to many shows, participated on the Aristo forum, and the identity of TATE was kept a secret.

The following pictures are from the same show: (look at the shoes) 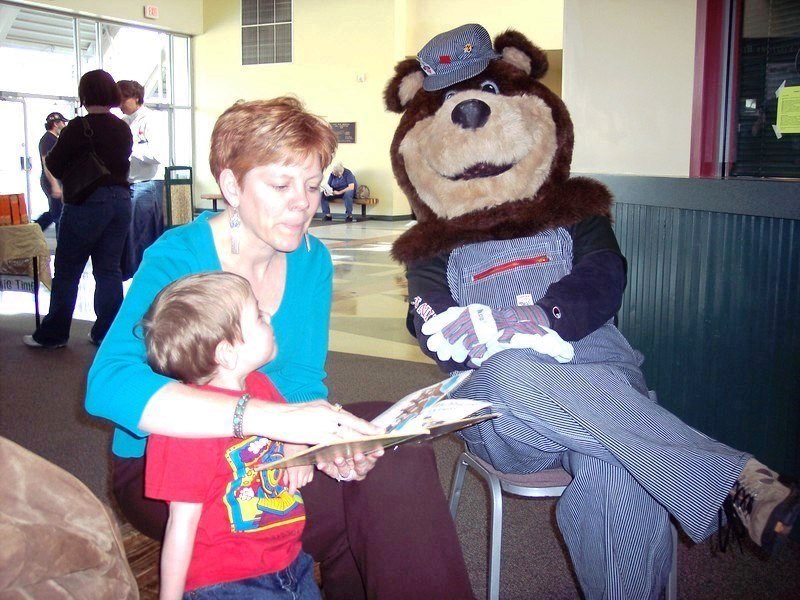 Look at the shoes again: 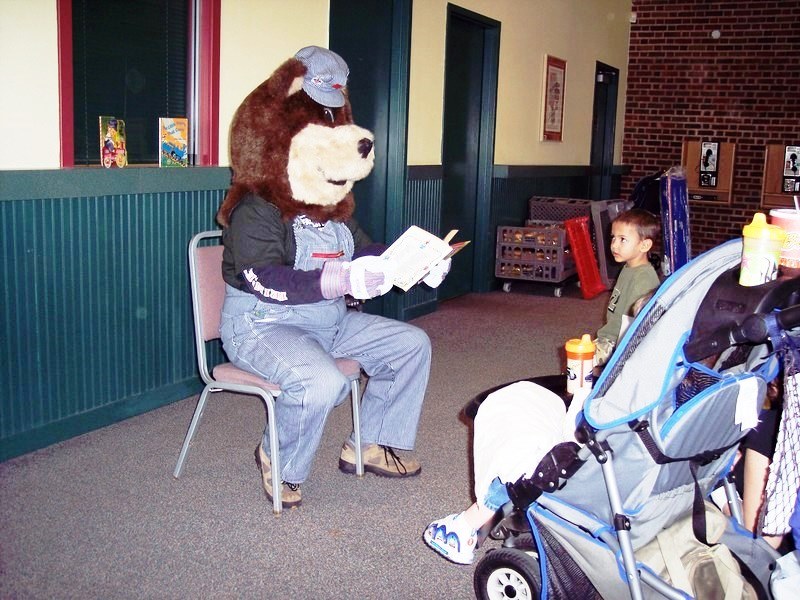 Notice below that the person to "TATE"'s right is actually TATE. I have to look up his name, I think it is NIck. They swapped the outfit to another person, but did not swap shoes. 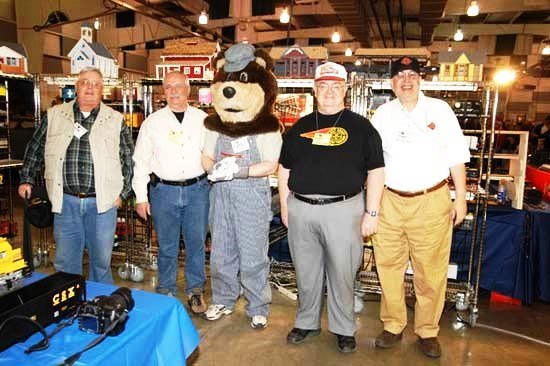