Since the Aristo GP40s I have suffered from wheel quality issues that negatively impacted their track power pickup capability, I elected to replaced them with custom made stainless steel wheels.
For information about the wheels, see topic, 'Stainless Steel Wheels For Aristo's "Prime Mover" Diesels - A viable alternative' .

I also decided to replace all of the wheels on the other Aristo diesel locos I have that  employ the "prime mover" type gear boxes using the same wheels (SD45, Dash-9, E8) since many of the wheels on these locos exhibit worn tread plating. As a consequence, an accumulation  of these poor quality wheels has begun to build in large numbers.

So what to do with all these wheels that will build to more than 400 over time?

Shown below is an example Aristo Union Pacific GP40 as received with factory supplied weights that measures about 9.5 lbs. 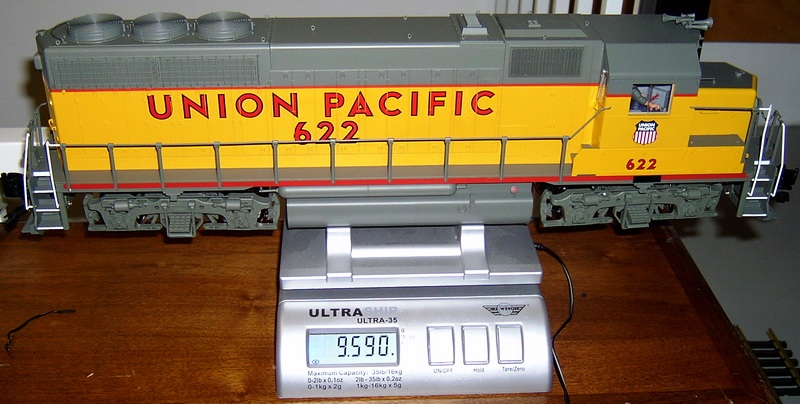 As it turns out, the GP40 only includes two factory supplied 1 lbs rectangular shaped weights. Shown below are the two removed for the measurement. 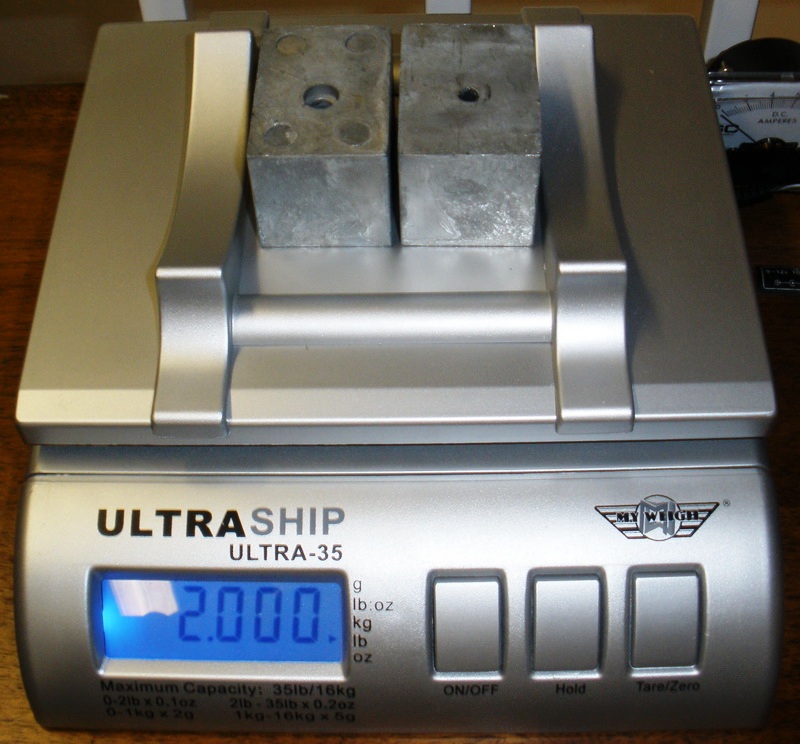 So I decided to augment the weights with recycled old diesel wheels for use as added weights in the GP40.

Shown below are the two factory supplied weights located under the fuel tank shell. 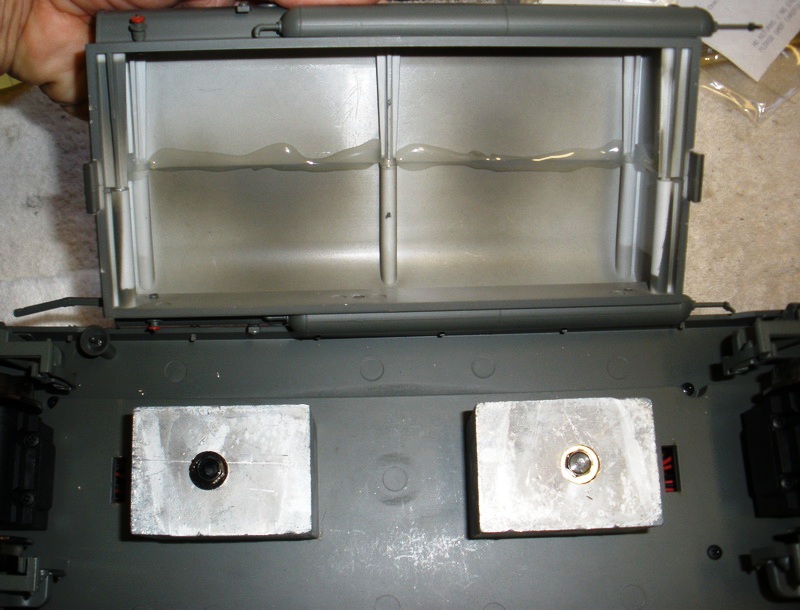 Note the fuel tank is retained in chassis slots near the weights by a plastic clip located at either end of the tank. Also, the ribbing protruding within the fuel tank will impact how additional weights are best installed.

The screw that retains the weight rests with its head along with a washer on the top of the weight. Another washer is used under the nut where the screw passes through the chassis.
Shown below is the factory metric screw (about 2.5 inches long) that is used to retain the weight. 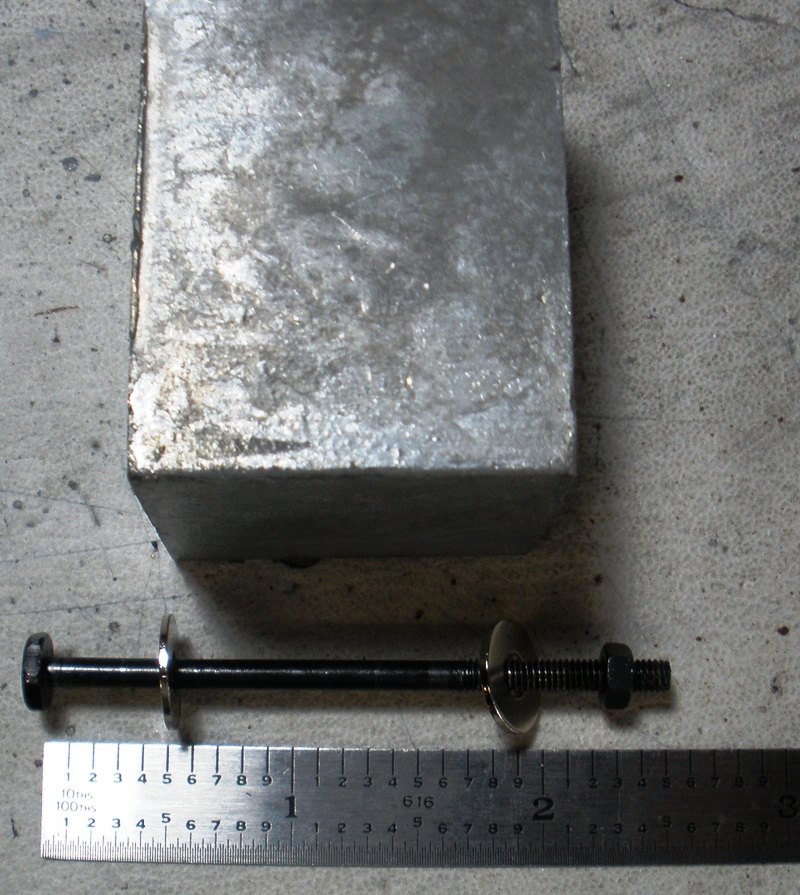 Shown in the below picture are three possible ways to retain the factory weight with the original factory screw on the top.

The hole in the factory weights and the loco chassis is much larger than any of these screws, thus allowing for moving the factory weights farther apart.  For this example loco, I chose to use the center 4-40 stainless steel screw for its strength and for ease of locating non metric nuts and threaded standoffs (subsequently discussed).

The picture below shows how the factory weights are rotated 90 degrees in an opposite, staggered arrangement.  (The hole in the weight is not centered.)  I found by rearranging the weights in this fashion provided just the right amount of distance for a slight friction fit of parallel groups of recycled wheels. I also inverted the weights to take advantage of the hole recess so the screw will have more penetration into the chassis. (This is to allow for the mounting of two additional discrete wheels.) 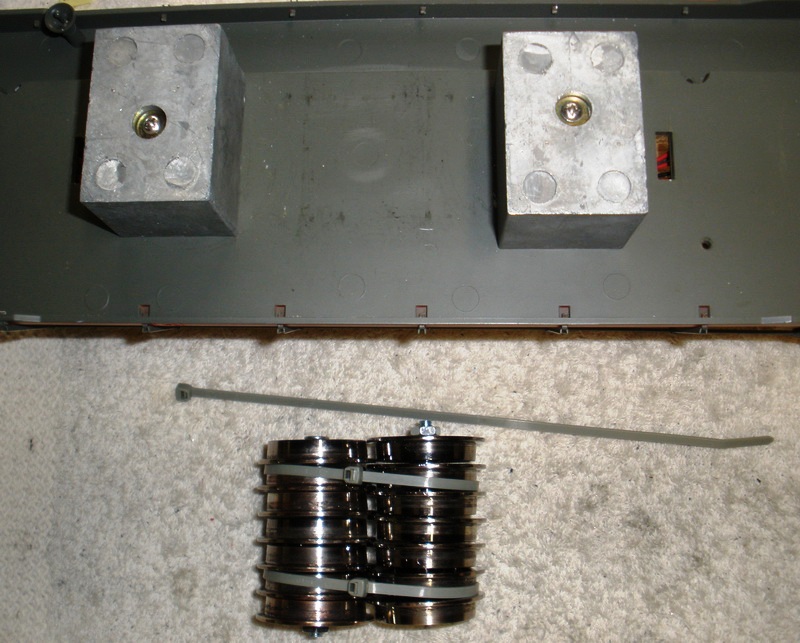 Each group of 7 wheels is held together by a 10-32 x 3 inch long flat head screw.
The group pair of 14 total wheels is cinched together with tie wraps.

The wheel groups are nestled in place between the repositioned factory weights. 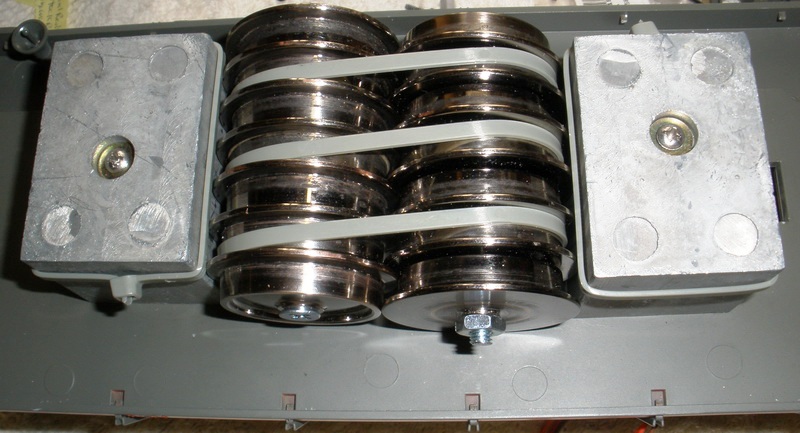 I discovered this is the optimal way to orient the weights so the clips on the fuel tank can still be pushed in the chassis and so the wheels will clear the fuel tank's internal ribbing - otherwise the wheel flanges will interfere with the fuel tank from seating properly when reinstalled on the chassis.

It is to be appreciated that there is almost zero clearance between the wheel flanges and fuel tank once the tank is installed. For this reason I chose to use a tie warp surrounding each factory weight so as to help prevent the wheel groups from dislodging and bearing their full weight against the bottom of the installed fuel tank.

Note: I later found that two groups of 8 wheels can be installed, and the fuel tank would still envelope the whole assembly (See Appendix) so the following description about added two more wheels to the upper chassis area may not be needed unless it is desired to have yet more added weight.

The picture below shows the weight retaining screws on the upper side of the chassis. 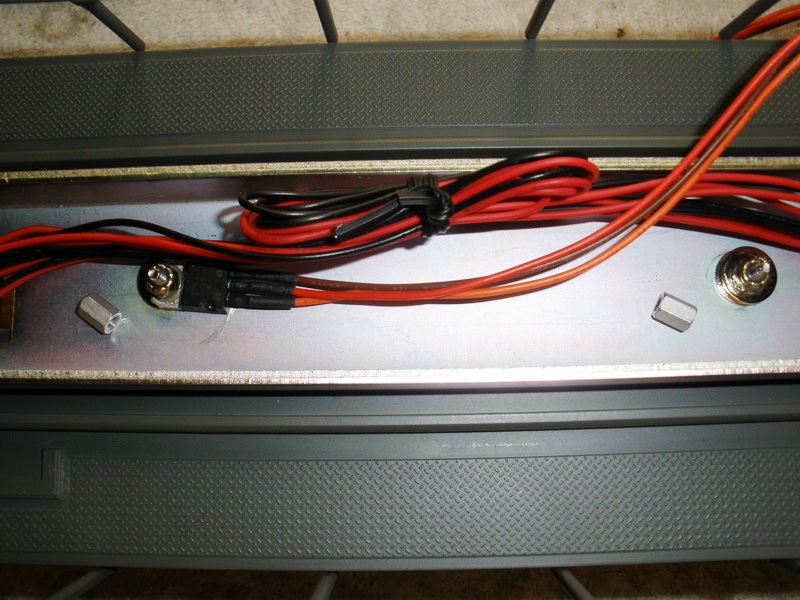 In this example loco, I chose to use the 4-40 stainless steel screws - retained to the chassis with nylon locking nuts.
As can be seen on the left side in the above picture, the factory voltage regulator device is retained in its original place for one of the screws. (Heat dissipation is reliant on the metal chassis channel.)

I then used 4-40 threaded standoffs on the protruding screws' threads in order to fasten two more discrete wheels as shown in the below picture. 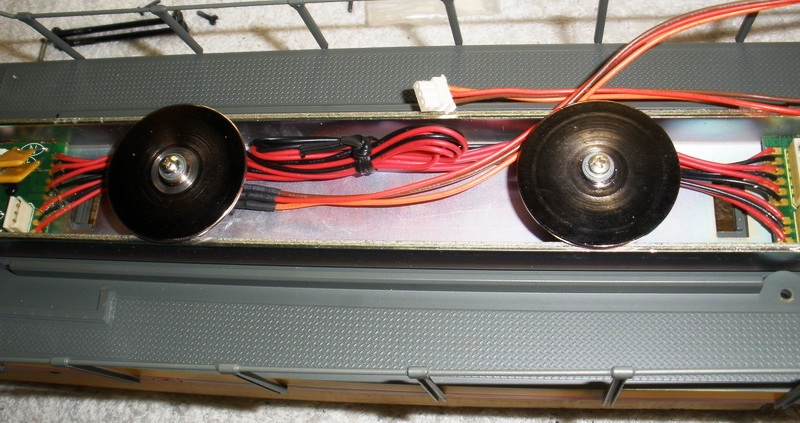 The two additional wheels are retained with screws to the standoffs. 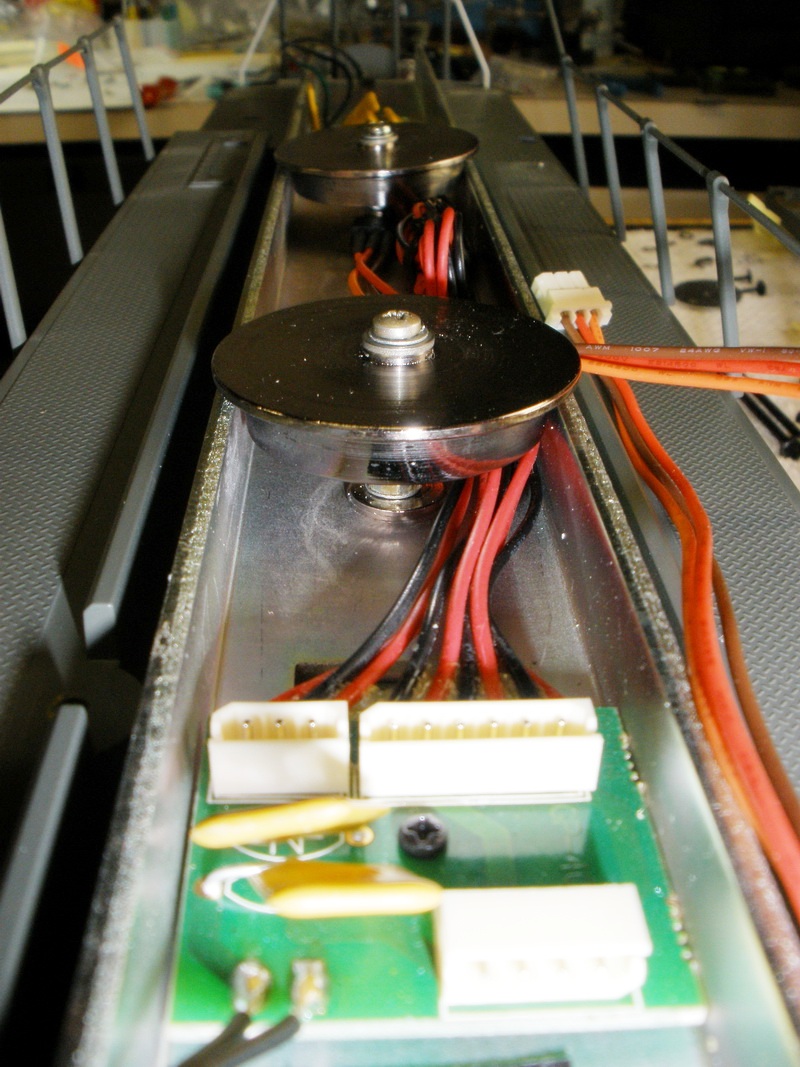 Shown below are the two groups plus two discrete wheels totaling 2 lbs. 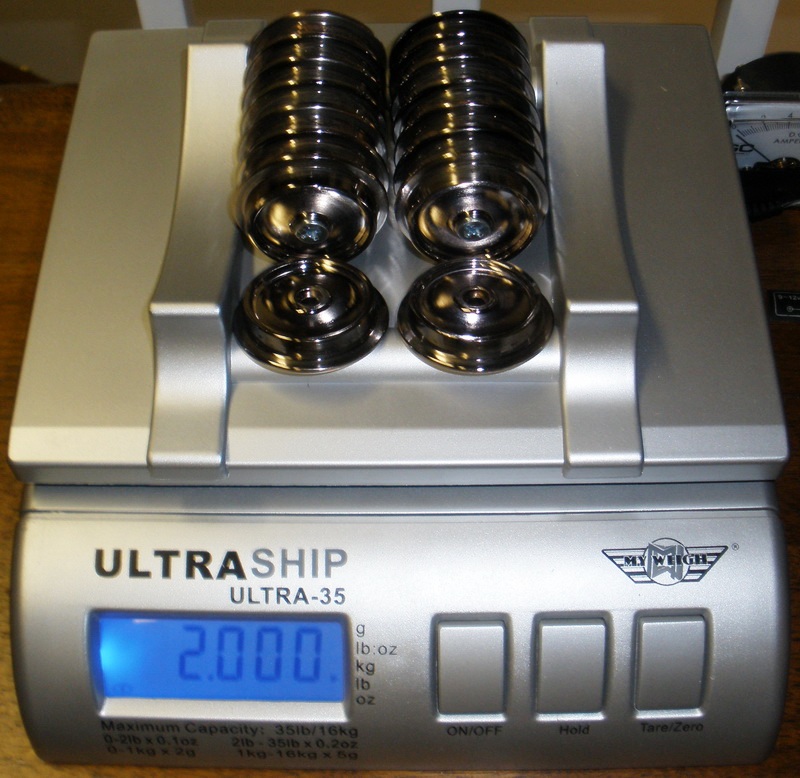 Shown below is the reassembled loco now weighing 11.5 lbs (2 more pounds compared to the factory unit for improved traction). 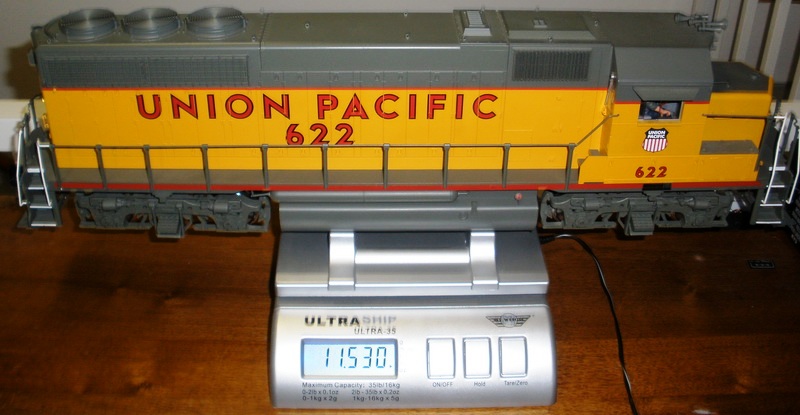 Two groups of 8 diesel wheels each also will fit between the factory weights and allow the fuel tank shell to envelope them providing the screws are flat head and the ends are cut and filed flush with the retaining nut - otherwise the fuel tank shell will interfere when attempting to install it.

Shown below are example 4 inch long 10-24 flat head screws with the protruding ends to be cut off flush with the retaining nut of an assembled wheel group (resulting in approximately 3.5 inch screw length). 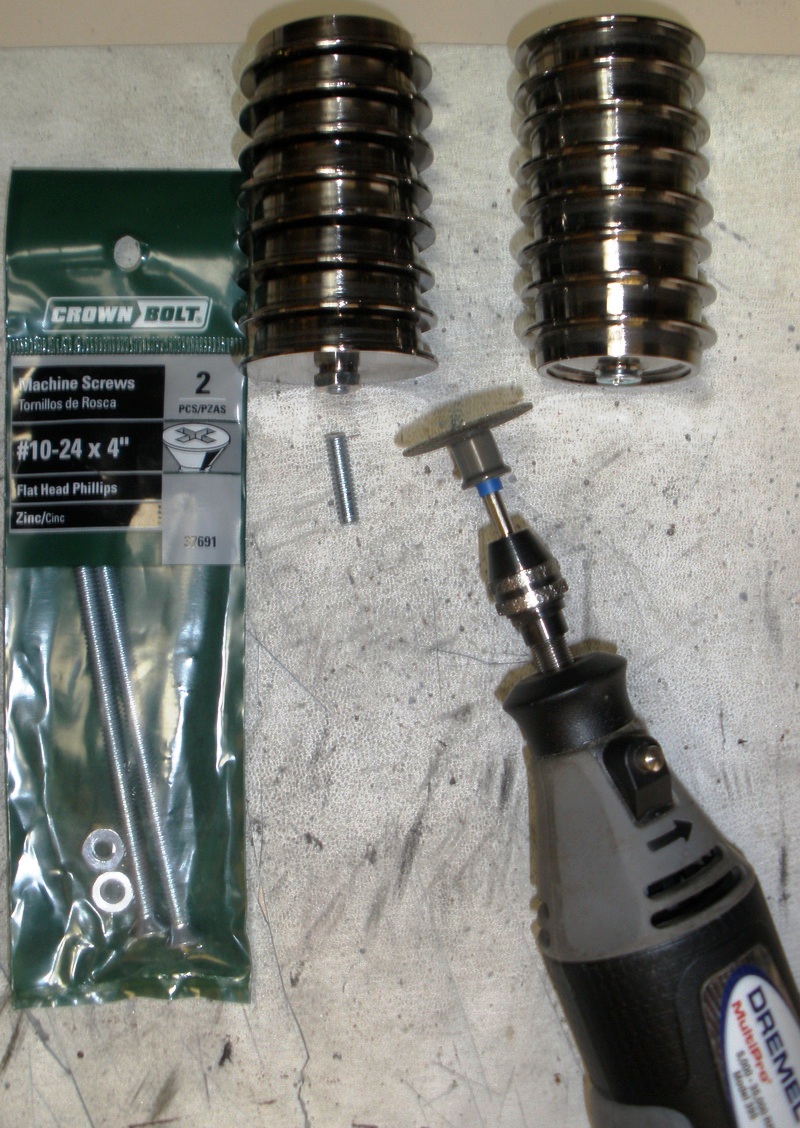 Shown below are two groups of 8 recycled diesel wheels (16 total) nestled between the repositioned factory weights. 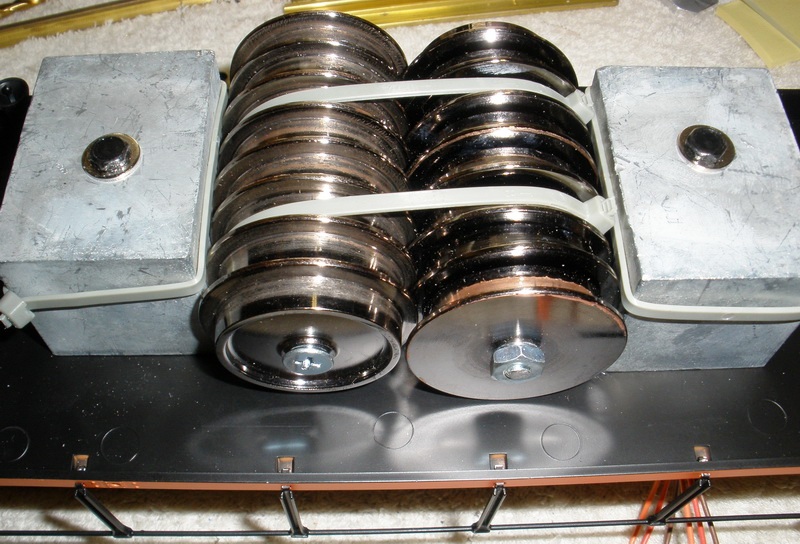 Note: It can be seen that I used the original factory screws and washers for retaining the rectangular factory weights for this installation. 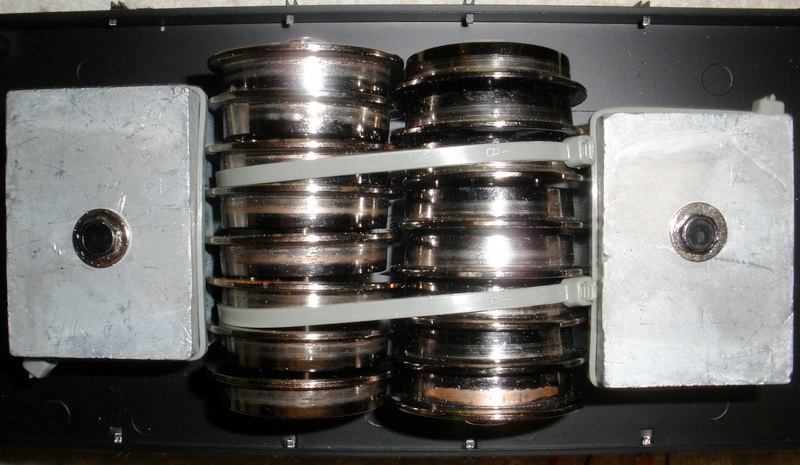 The fuel tank shell will just barely fit providing the groups of wheel weights are laterally centered - including the screw / nut projections. 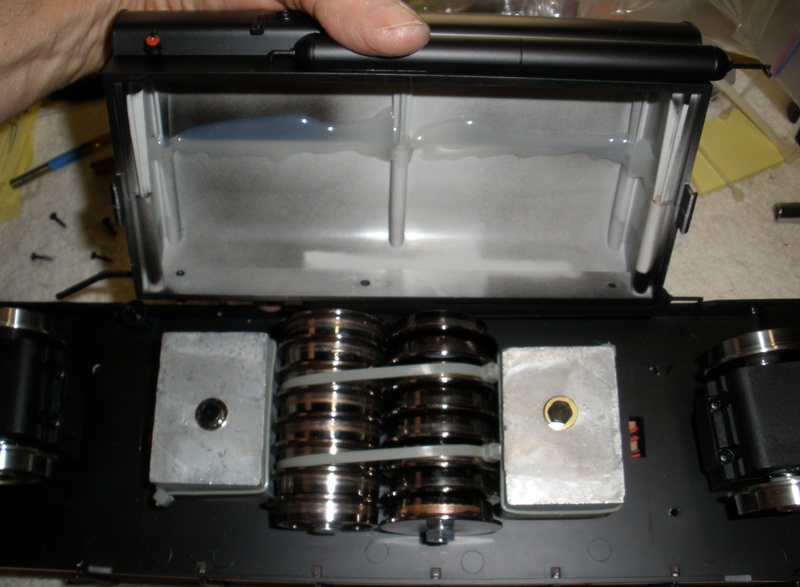 As shown below, the example D&RGW GP40 with all 16 recycled diesel wheels weighs the same 11.5 lbs as the example Union Pacific GP40 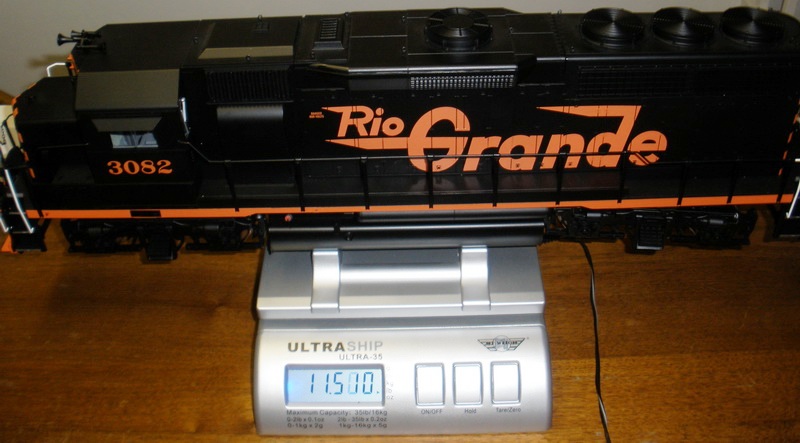