I've been threatening to do a comparison test of several remote control systems, but I hate buying stuff I do not use. Lewis Polk of Aristo had promised to send me a unit, but I guess that's out since I "left the fold" and actually was critical of some Aristo designs.

Other manufacturers and large distributors were not quite so scared of getting the real lowdown on their equipment.

Anyway, I guess I had mentioned that I would like to do a comparison test one too many times, because (on loan, not free), between a friend of mine, and a manufacturer and a dealer, I received two QSI Gwire receivers, a NCE "GardenWire" throttle, an AirWire T9000 throttle, and the first version AirWire decoder. I also received the new Aristo Revolution Trackside Engineer (TE) system, with the capacitor board. I have a bunch of QSI modules already, and I have a "traditional" NCE track powered DCC system with wireless throttles.

The first day I did anything, I hauled all the stuff to the back yard, and figured I'd try the AirWire first, because I can compare the 2 different throttles, and also the difference between the QSI and the AirWire decoders.

WOW. This was a serious wake up call.

I took an Aristo RDC, which is easy because the Aristo socket is under the loco, inside a box that pops off with 2 screws. Threw the QSI in there, and figured I would remember the last address used.

I opened the package with the Gwire receiver and did not look at the instructions, there was a single sheet in there with it. There's a 12" long flat ribbon cable with it that connects the  QSI decoder to the Gwire receiver. The cable only has contacts on one side. It is pretty obvious on the QSI which side the contacts are on. The receiver was not so obvious, but I thought I could see them pretty clearly.

Taped the receiver to the top of the  RDC put it on the rails on DCC power. Put batteries in the NCE throttle and I was ready to go.

OK, so I have a NCE system already, so I knew that pressing the red button turns it on. The NCE came up, and I hit "select loco" and the DCC number of the decoder and it still would not move. Alright, look at the directions. The NCE directions were very simple, the very beginning said be sure you are on the same channel on the radio and the receiver... the receiver has a rotary switch and it was clearly on zero. Checked the NCE manual (the startup says where to check the radio... 2 button presses and you are in radio setup)... nothing...

All right, like it is not hearing the radio... take the single piece of paper that came with the Gwire receiver... doh! It says to be sure you put the cable in right... 2 sentences say which way it fits into the QSI (right) and the receiver (I put it in upside down)

Bingo, everything works. The NCE quick start guide tells you how to go into service mode (program track).. very cool, I guess that makes sense, since you have to be the only one on your frequency, so you always can be sure to talk to the decoder only, but what a nice feature.

OK, now that that works, picked up the T9000. First impression: construction is weird, there is a metal front piece and it sort of fits into an ordinary plastic case. But it looks crummy. Ok, pull the screw out on the bottom... won't open... oh, take the antenna back off... ahh, you have to gently take the whole guts out... be careful, I think it would be easy to damage the antenna connector... 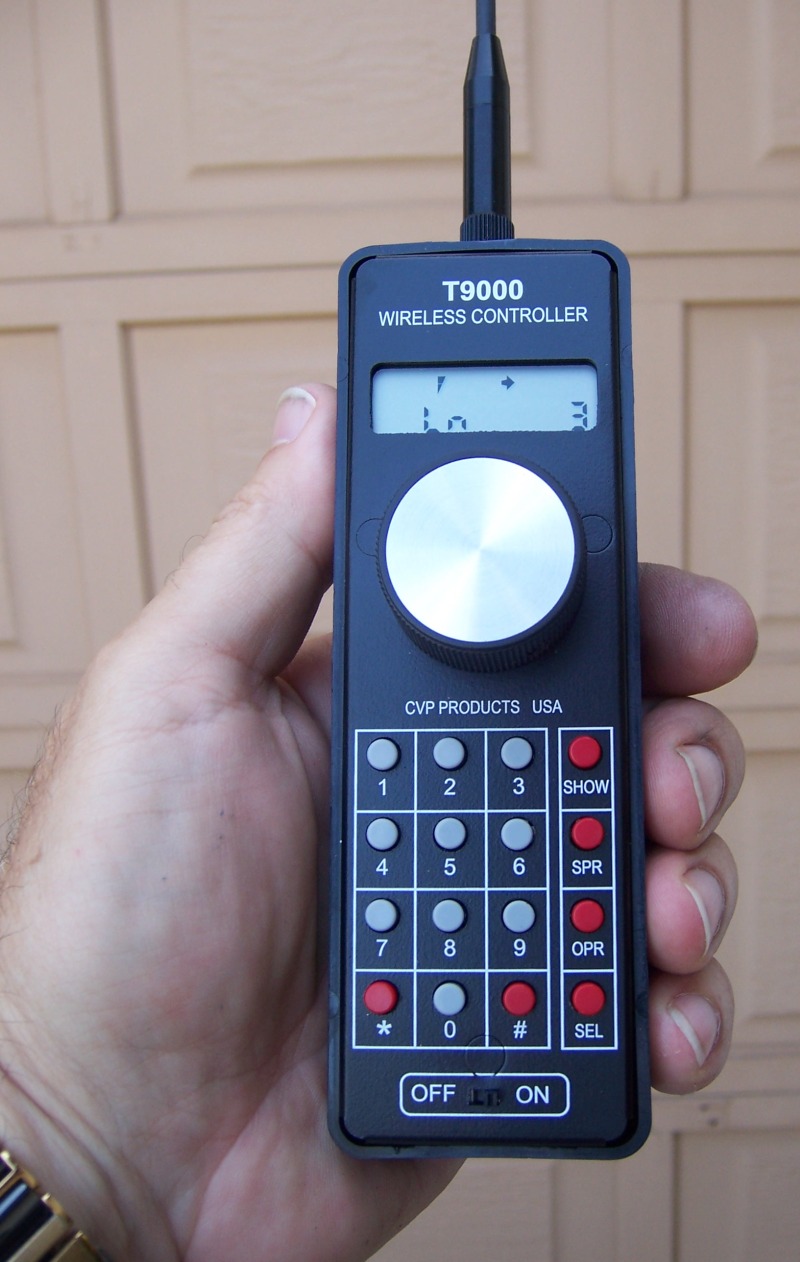 Not real happy about doing this every time it needs batteries, you could damage a part in the board easily... ok pop it back in... huh? it won't go back in... maybe the antenna is hung up... nope... futz with it, and finally use a screwdriver to spread the bottom of the case further open... I was really concerned I was doing something wrong... the construction is not user-friendly. Figured it out, there is a small shoulder on the base of the antenna connector, you have to center it in the plastic case so it sits in enough that the case goes back together. By way, the inside of the case has a Radio Shack part number, 270-1804....Plastic molding is expensive, but the NCE has done it, CVP, you can do better.

The edges of the case are sharp, the metal front does not fit well, and is not flush with the case. On form, fit and function, the NCE wins hands down. The only thing the T9000 has going for it is that it is small.... (too small it turns out) 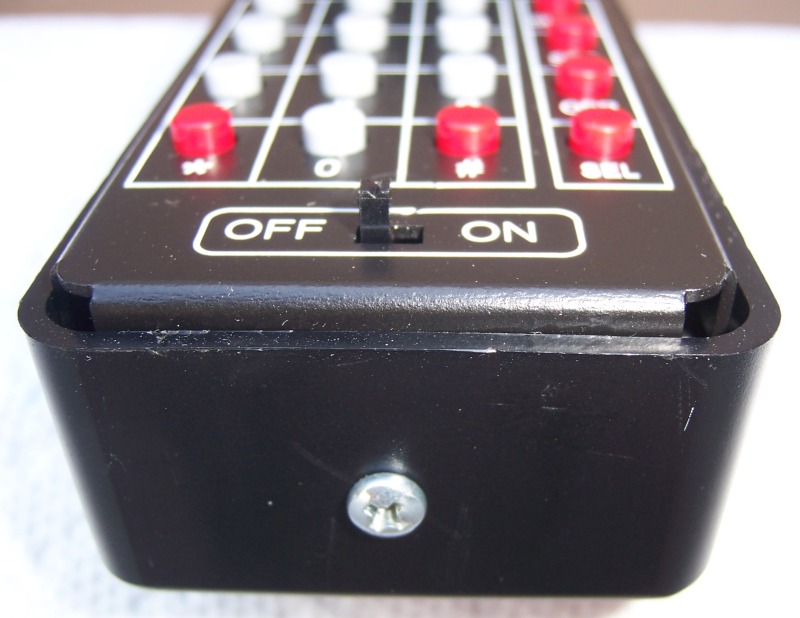 OK, turn it on, and the display has hieroglyphics only! There's a little wedge mark that must mean something. There's an arrow pointing to the right, I guess that is direction, but is it forwards or backwards? Dumb, like the TE. No reason not to know which way is forwards. 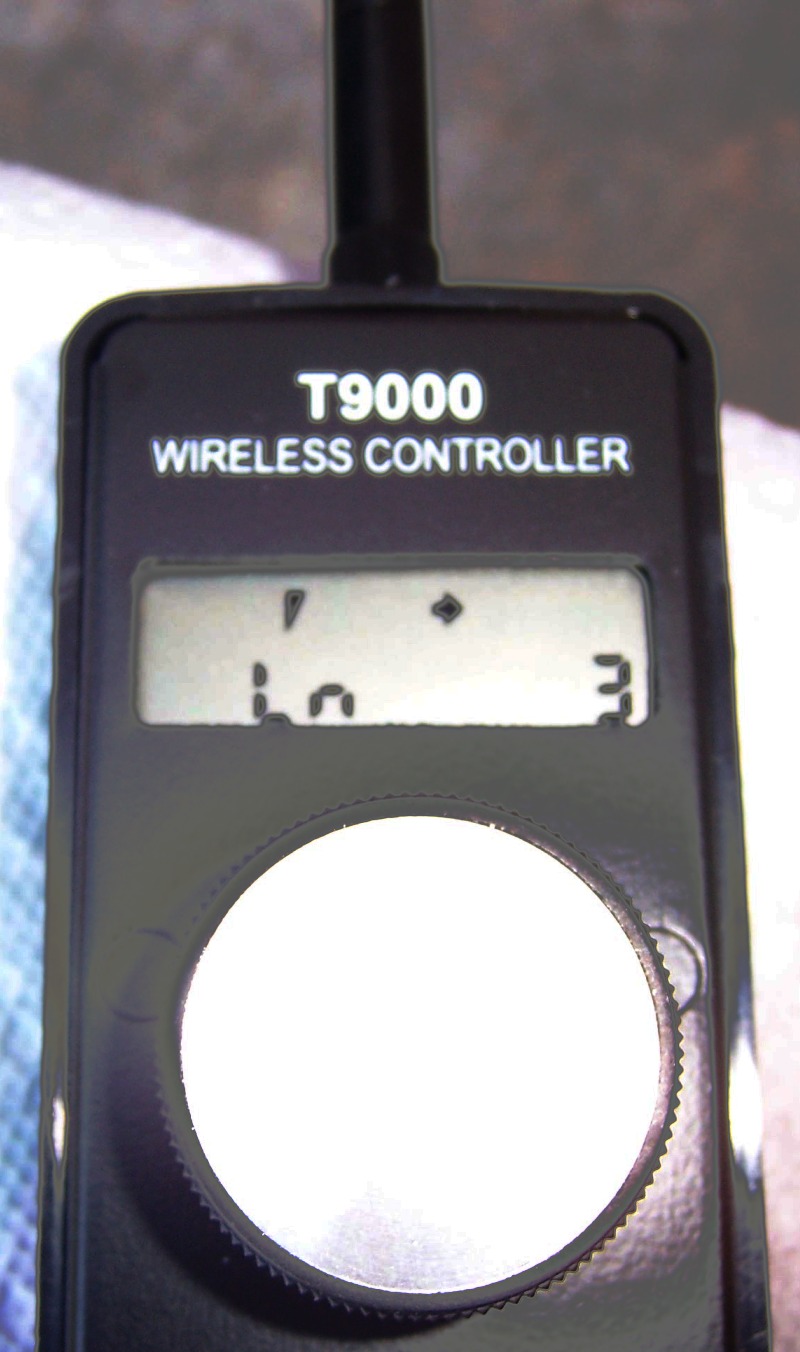 The manual is a bunch of 8.5 x 11 sheets of heavy paper printed on yellow paper (why? so it's harder to read?), and the pages are folded in half, not even stapled.. the whole thing falls apart to the ground. OK, pick it up and look at the first page.. table of contents...

2nd page is a whole page on batteries... doh... I already put the batteries in...

OK 3rd page will have what I want... nope, just a list of the names of the buttons with no explanation, except that the knob does the speed (doh) and press on it to reverse... ok...

OK, page 5 goes into "decoder function control"... I'm getting really irritated... I realize now that the people who complained about the stop button sequence on the NCE and the NCE manual were mostly loyal CVP customers, and it's the CVP stuff that has poor documentation...  I flip forward, SURELY the very important function of selecting the DCC address of the loco should have been on page one... nope now the manual goes into the display and how to show the speed step mode on the screen and how to stop the loco when you have this special display... I'm getting mad...

Back to page to the "Easy as 1-2-3 page" nope, no reference to selecting DCC address..

OK, The locomotive runs... oops backwards...where the hell is the stop switch? There isn't one!!! grab the loco and twirl the speed knob... it finally stops... there's momentum... jeeze.

OK, the fundamentals work, now try the basic functions of the throttles

I tried the horn and bell from the NCE first, just push the horn button and it honks, and the bell button is on/off. They work.

Next I tried the T9000.... hmm, no horn or bell button. Luckily I know which functions they are, F1 for the bell, and F2 for the horn. The horn is momentary, which seems like it could cause trouble later, since there are some functions (like the doppler shift sound) that need the horn to stay on.

Clearly, the fewer buttons and the lesser information on the display is irritating me. You just have to remember more stuff to do anything other than move the loco.

***need*** to complete this article