USAT came out with some new ore cars this year (2008) and they look pretty nice at first take. It turns out that USAT purchased the old Lionel molds, see the Lionel section for modifications to lower the cars and body mount Kadee 830s.

They have operating doors, released by the small latch. The weight is nice, from the heavy metal wheelsets, typical USAT high quality. No provision for body mounts, and of course the supplied couplers have too much space between cars. Some people have cut down the shank of the coupler to shorten it. I really want body mounts for appearance. The picture below shows the doors closed (the release latch is in the foreground): Below is a close up viiew of the doors opened, one has a lip that holds the other closed: One major issue I have is the body is way too high to put a body mount Kadee coupler on it. It would take very thick shim. Well, taking a look at more prototypes, it seems that this car is also WAY too high. So maybe lowering the car to meet prototype height will solve my issue with body mounting.

The frame of the car snaps out, there are are 3 lugs on each side that snap it into place. The picture below shows the body sans frame: 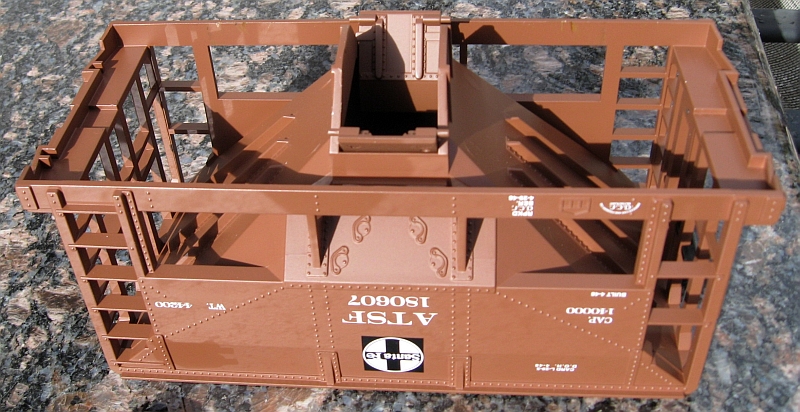 Well, once I figured out where the lugs were, it was easy to take apart. The picture below shows the frame, you can see 3 lugs on the near side, right in the middle and near the ends. 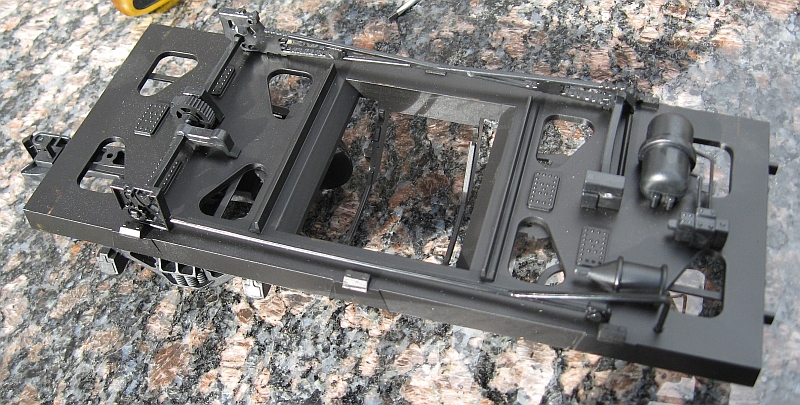 Now on to the under side. The pciture below shows the bolsters, and there is something funny right off: 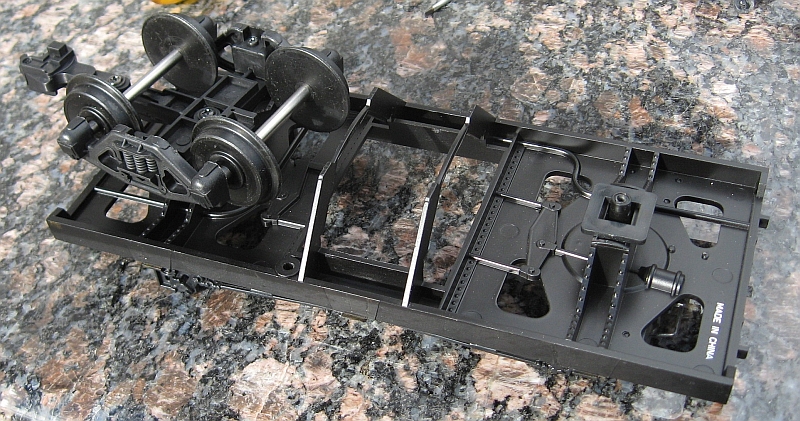 There's a square piece of plastic on the bolster: 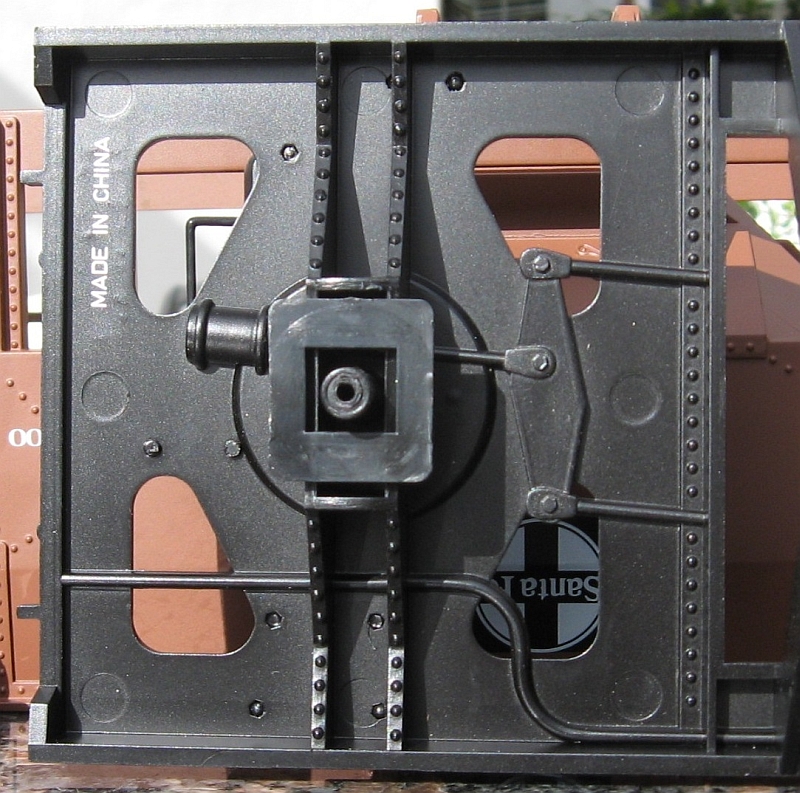 What the heck is that doing there?

It's a spacer, glued in place. You can see the original side bearings. All I can figure is that they wanted these cars to work on very tight curves. Looking at the car from the side, the tops of the wheels completely clear the frame rails. That is not how the prototype was, and there is oodles of space under the car to lower it. I'll try removing this spacer first, but can the bolster be cut down even more?

The picture below says YES! to me. It's hard to see, but the center post is separate from the hollow bolster, so you can cut away the bolster to lower the car, and you still have the center pin to hold the truck in place. 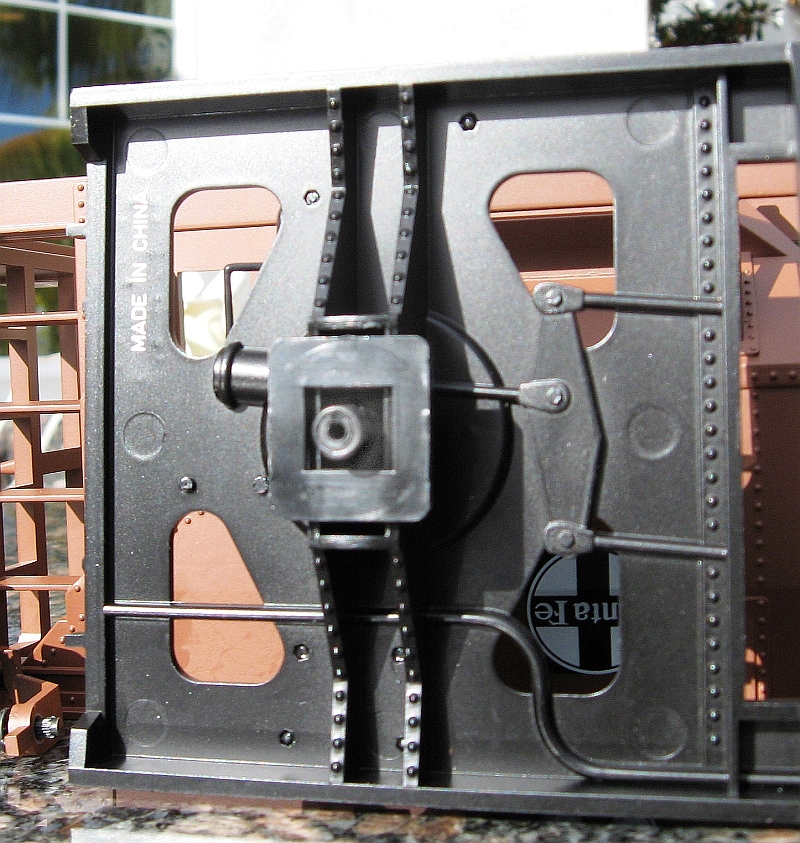 (The Lionel cars did not have the extra "plate" on them)

I researched how high the prototypes sat, and looked into how much I would have to cut from the bolster to get the cars at a more prototype height. That would also help putting the body mount couplers on with a minimum of shimming.

After finding that the trucks are also at the wrong places in relationship to the ends of the cars, I decided against using them.

For reference, here is a picture of an MDC 1:32 hopper next to the USAT 1:29 hopper. Of course they are different sizes, but the MDC matches the prototype pictures I have found. Notice the relationship of the wheels to the ends of the car, and how much they recess up into the frame. Lionel/USAT had to shorten the hopper doors to accommodate the truck spacing also. That's something I cannot change. "Greg, try Ted York's excellent Cajon Pass website and go to the Historical Cajon section. That's where the only shot I know of is; GN ore cars going down the pass to Kaiser Steel in Fontana, on the Santa Fe in the very early fifties. Still trying to figure out when this ore  operation strated and when the ore shipments to Kaiser switched to the SP.
Regards, Otto Kroutil"