This product was produced both with a cover and without. The gondola itself is identical in either case.

Here is a side to side comparision of the heights: (notice the Santa Fe is the lower/newer version)

The lowering of the floor necessitated a "notch" in the end sill for clearance of the coupler tang for the stock truck mounted  couplers:

I've converted over to all body mount Kadee couplers. I've been able to stick to the 830s, and again, I like the prototypical slack action only found in the 830s.

Well, solved the body mount problem on the gondolas:

Now, the easy trick: Put a 1/4" router flat end router bit in a drill press. I kicked my speed up to 3,000 rpm, higher is better. I locked the quill so the up and down motion of the press was locked.

Now, I brought the drill press table up so that, when the gondola is lying upside down on the table (remove the cover), you just slide it under the router bit, and take a little bit off the ribs. Put the truck back on and test height with the Kadee gauge, iterate by slightly raising the table and locking it each time. Took me 3 passes to get it to the final "cut". Here's the important part: With Aristo metal wheels (29111b) the space between the table and the milling bit is: 1.75 exactly.

Put the end sill back on.

Now just ease the gondola on it's back to cut the end sill to exactly the same "height" as the coupler pad "ribs".

Now you can go to the other end of the car, and cut the coupler pad "ribs" and end sill all in one pass.

Use a flat file to dress the slot in the end sill to exactly fit the Kadee coupler box.

Once you have your drill press set up, you can cut the end sill and coupler pocket "ribs" in about 1 minute each. 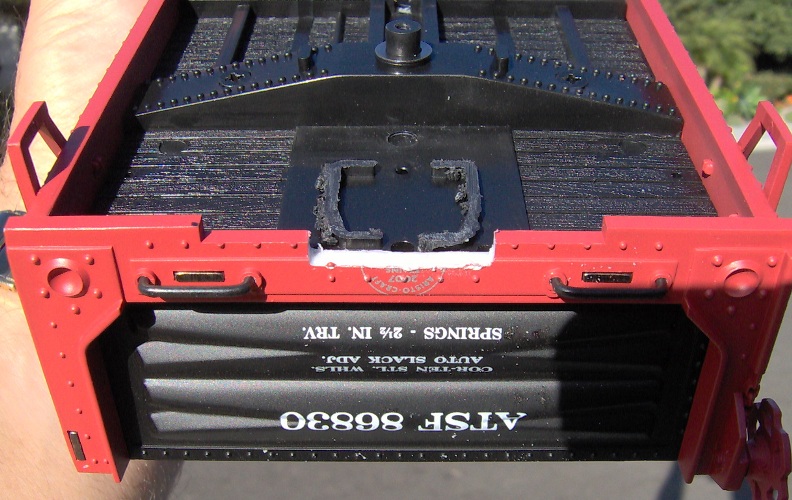 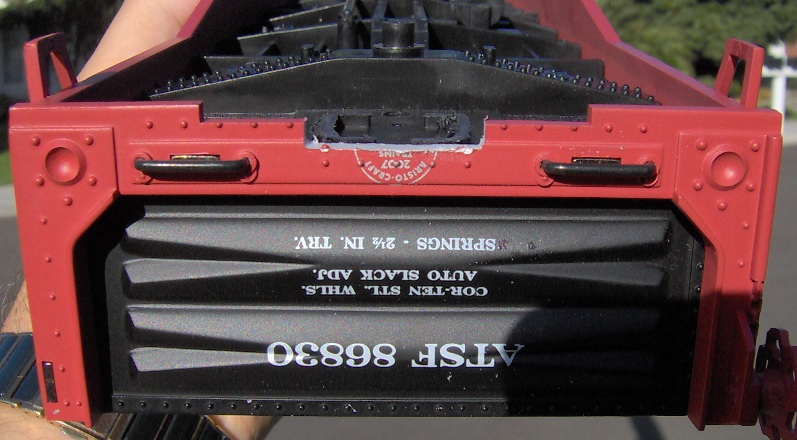 Here's the coupler mounted. I used 3 3/4" #4 sheet metal screws. I drilled right through the floor, but you can blind drill and use shorter screws, maybe 3/32" shorter. You would have to blind drill the hole, and trim the screws after you started the screws. I'm going to take the screws out, shorten them, and putty the hole inside. I want the maximum strength. Notice in this picture that you have to remove all of the "tang" on the truck next to the coupler box. I left the stock coupler tang on and trimmed the other side with the center beam. Now I can buy a bunch and do them all at the same time!