The reason this vignette includes "Repairs" in its title is because the car was obtained used, and its frame was damaged. Shown below is the car repaired and fitted with body mounted Kadee 906R (Rust color) centerset couplers.

Note the prior owner had equipped this car with Aristo-Craft's Bettendorf friction bearing type trucks, though fitted with USA Trains metal wheels. The Aristo trucks have real springs, whereas, the USAT trucks do not.  Maybe the sprung truck compliance was favored by the prior owner.  Since the Aristo trucks have a slightly longer wheel base than the USAT trucks, I kept them since they seem more appropriate for a "70 ton" rated car.

This vignette will describe repairs done to the car along with body mounting Kadee 906 type centerset couplers - the intended aftermarket coupler box that USAT designed the car's frame to accept. The predecessor Kadee coupler was the 830 which is interchangeable with the 906, both employing the same box.

For many years USA Trains (USAT) produced a realistic 1/29 scale open top externally braced 3 bay hopper car with friction bearing trucks. This car is based on a prototype of 70 ton rating that was prevalent in the 1950s.

The car comes standard with a coal load that can be removed. 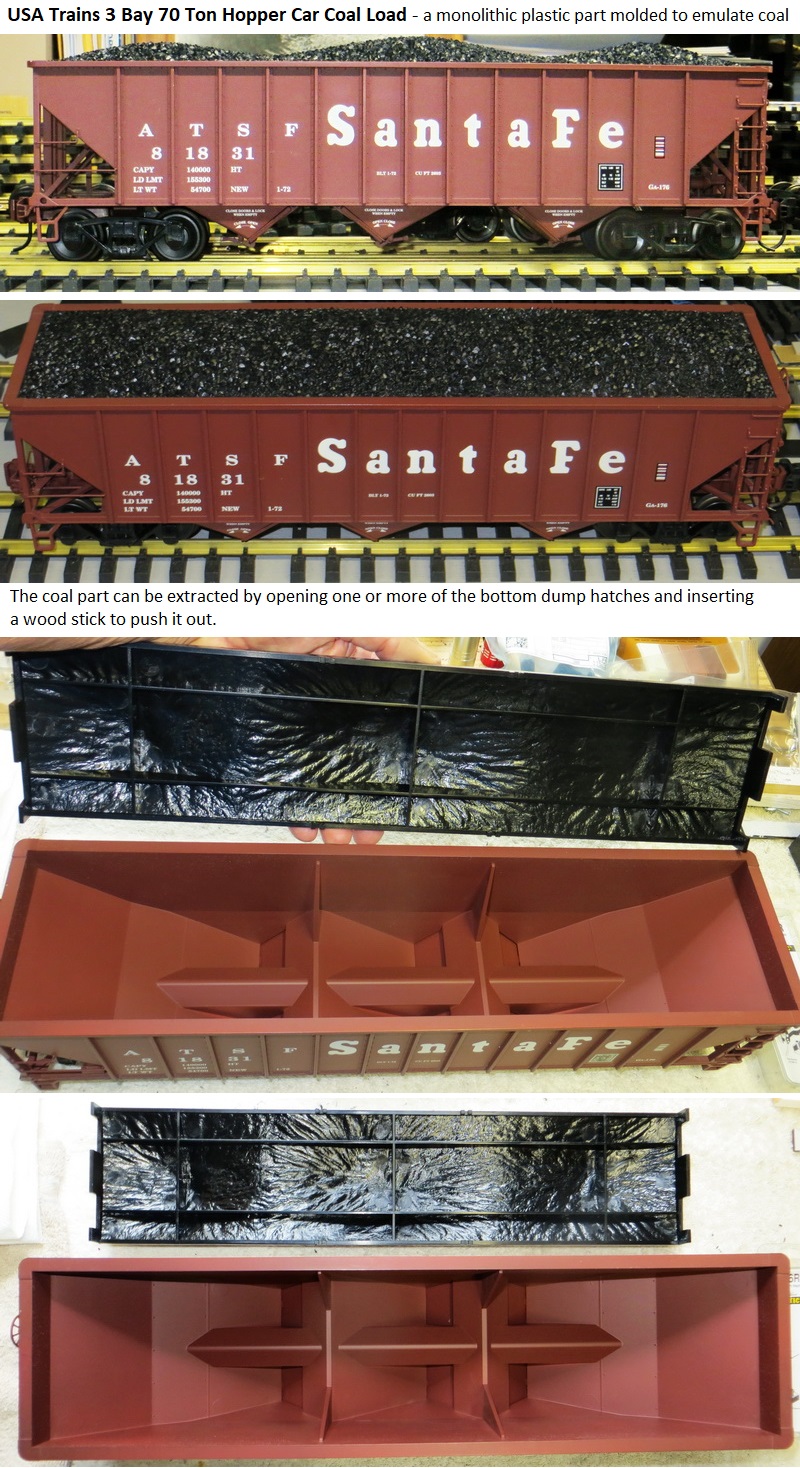 The ATSF livery that USAT chose to use for the car is detailed in the in the illustration below. 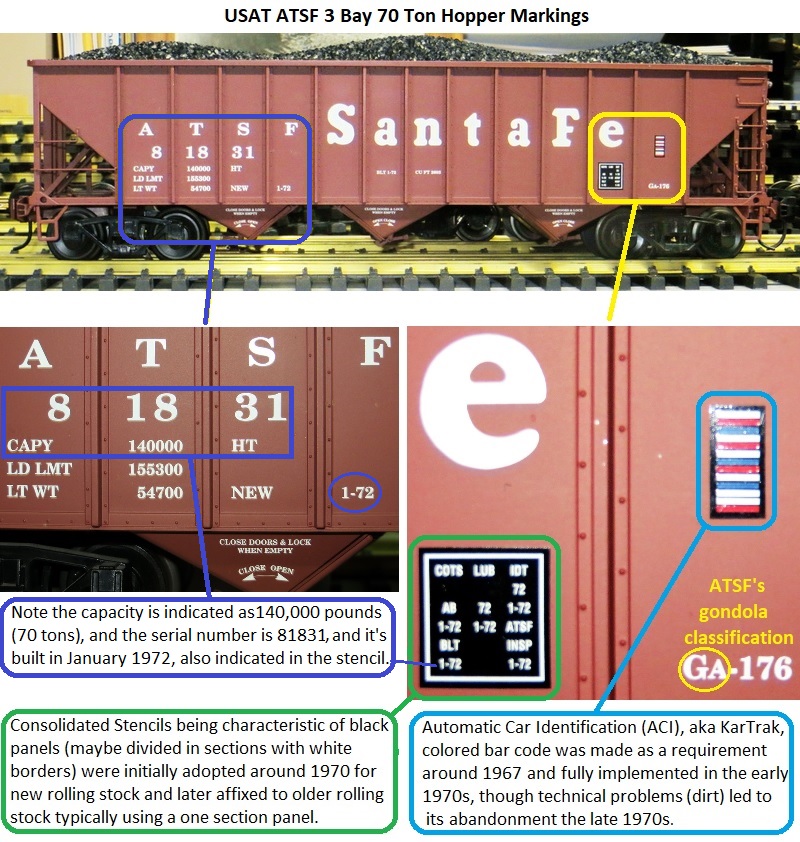 Given the build date, stenciling and ACI code, the car that USAT chose to decorate in the ATSF livery in road number group 818nn seems to belong to a more modern era 100 ton type car with roller bearing trucks as illustrated below in Paul Rice's picture. 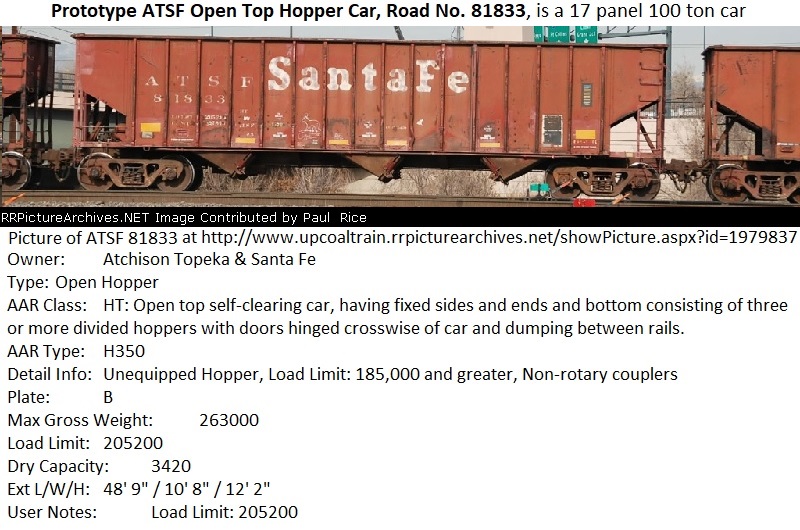 So far I have not located an externally braced prototype ATSF 70 ton 3 bay hopper car. None-the-less, the USAT car is a nicely detailed offering.

When measuring the USAT 3 bay hopper car, when scaled up, it does appear to conform with prototypes for this car type of the 1950s - the ATSF road name not withstanding.

The USAT car is more modern than its predecessor "Offset" type constructed 2 and 3 bay cars but not as modern as the later longer and bigger externally braced 100 ton hopper cars with roller bearing trucks.

The USAT 70 ton hopper car I obtained used is of the ATSF Santa Fe road name. It was in excellent condition - except for hidden frame damage. The car had been equipped with Aristo's longer wheel base Bettendorf trucks fitted with USAT metal wheels (which is OK) and body mounted Kadee 907s with cut off trip pins. The Kadees were mounted on spacers for a low to railhead attitude - likely to conform with similar low to railhead couplers factory prevalent on USAT cars and locos; hence, the Kadee's having cut off trip pins. Normally, the trip pins work in concert with a Kadee track magnet for the purpose of uncoupling cars.

Illustrated below is the used car which needed to be repaired.

To best access all the screws that hold the frame to the underside of the car body, both trucks must be removed.

Illustrated below are the screw locations and additional components (brake pipes / hoses & cut levers) that need to be removed, too, and if body mount couplers are present as in the case of this used car then these were removed precursor to repairs. 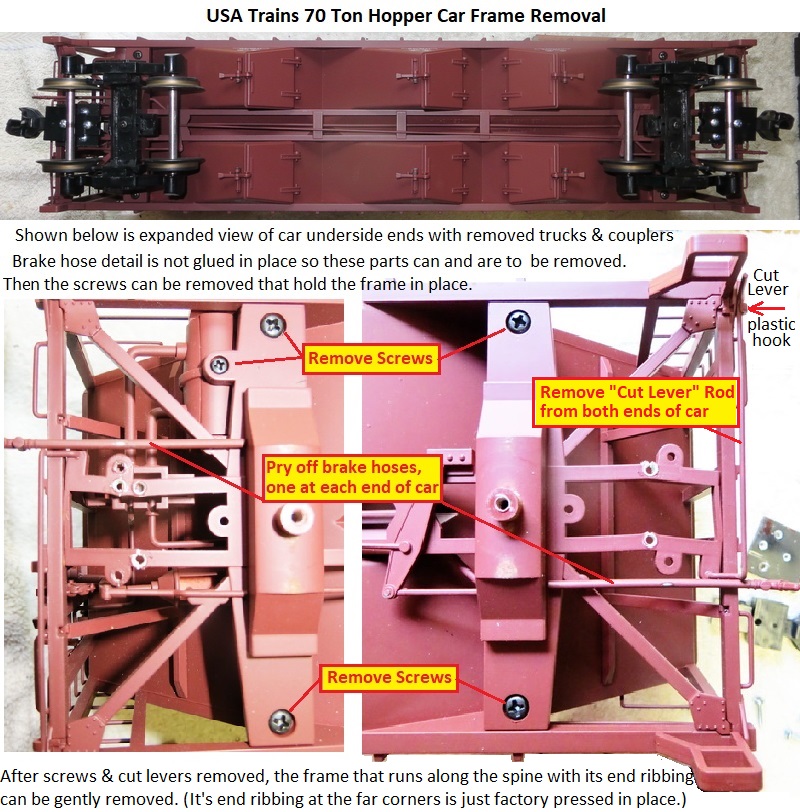 Note the brake hoses and cut levers are not factory glued in place, but the paint may seem as they are. Careful back and forth prying should dislodge the components. (Interestingly, the foot stirrups at the car's 4 corners are pressed in; these need not be removed.)

The frame can then be removed by carefully lifting at its rib extremities and then center spine. The frame's extremities are not factory glued in place.

To repair this particular car with twisted frame rails, a plug is made from ABS plastic material obtained from TAP Plastics. As depicted in the below illustration, starting at one end, the plug is progressively inserted in the pocket surrounding the frame rails as its leverage serves to straighten them at the same time. The fastening of the Kadee 906 type coupler box will then serve to sandwich everything together.

In the above example, the frame's side ears that accept the screws to mount the Kadee 906 box were damaged, so the screws were inserted from the reverse side of the frame acting as studs. If not for the damage, the screws would normally be installed from the coupler box side and threaded into the ears.

Caution: It's best to use smaller #2-56 machine screws (that Kadee use to provide in their kits) since this car just does not have sufficient material to withstand the wedging force imposed from what Kadee now provides with their larger diameter self threading screws.

Having nothing to do with the repairs, the brake wheel end of the car needs to have its "L Rib" trimmed to clear the Kadee coupler box lid's lip, otherwise, the box will bind and won't align with the intended mounting holes in the frame's ears. Alternatively, the lid's lip could be notched out to clear the rib protrusion, but I chose to trim the car's "L Rib" as illustrated below. 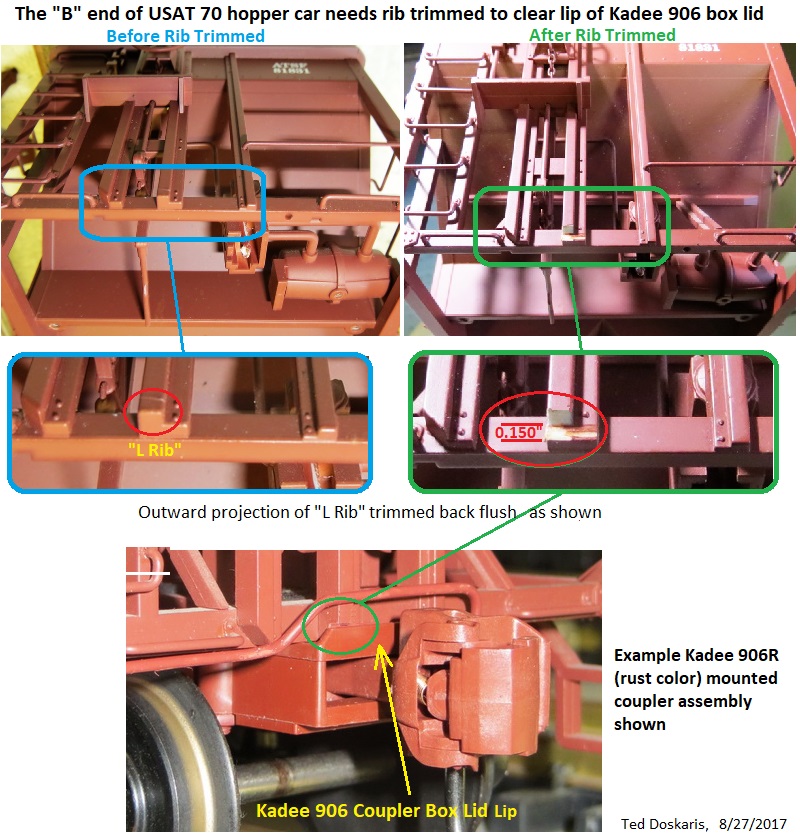 Normally, Kadee 906 coupler boxes are fastened to the frame with the frame already on the car.

Since this example car had a damaged frame, the repaired frame replete with pre-mounted Kadee 906 type coupler boxes can be installed back on the car body's underside in the reverse order the frame was removed.

Illustrated below is the repaired frame with its pre-mounted Kadee 906 type couplers. 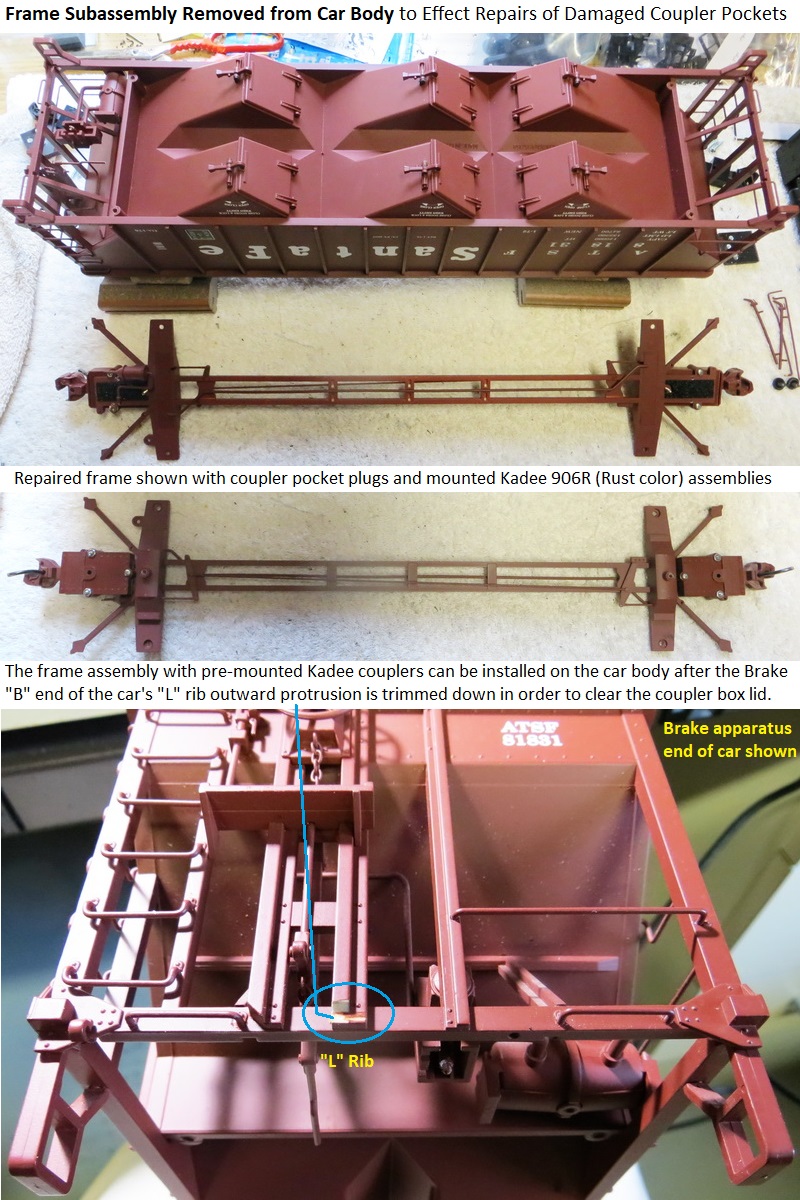 Caution: Care should be taken when manipulating the rib extremities, particularly at the brake wheel end of the car. After the frame is fully seated and brake apparatus is aligned to it, the screws that were removed are to be reinstalled. Illustrated below is the successful result. 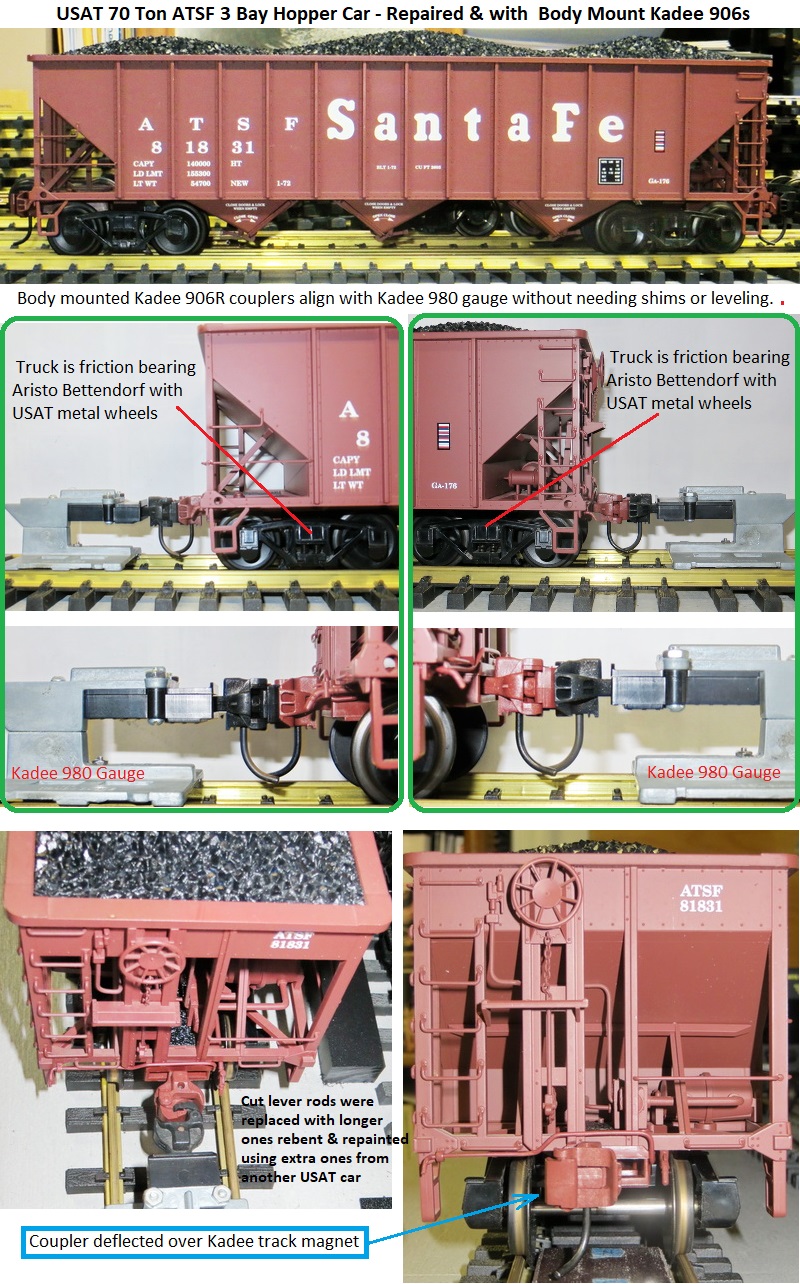 As to the "Cut Lever" rods, USA Trains normally supplies two types with a new car, a short one for truck mount couplers, and a longer one being bent to clear a Kadee 906 type box. Since the used car I obtained only had the short Cut Lever, I used a longer one left over from another USAT car that I re-bent and repainted. Caution: The rod material is somewhat hardened, so bends typically can only be done once or risk breakage.

For comparison, the weights of 3 cars (Two Aristos and the one USAT) are illustrated below.