A test train was setup to measure coupler drawbar forces. The train was comprised of 42 x Aristo 100 ton hopper cars with an Aristo track cleaning car at its end. All the hopper cars have metal wheels and the axle tip / truck brass bushing areas had been lubricated sometime ago.

The tool used for measuring coupler drawbar pull force is a digital fish scale, namely the Ultrasport 30 model OCS-2 having a maximum weight capacity of 66lb. The scale was set to pounds (lbs.) mode. Experience has shown that several repeat measurements must be made with the scale so that an average can be used for more meaningful results.

An Aristo standard knuckle coupler was attached to the scale's hook end and coupled to the first car of the test train to be pulled by hand.
It took some practice to do the tests whilst using a digital still camera to capture the measurements - realizing a motion picture would have been an easier, better way to get more precise readings, though at the expense of the time it would take to locate the video frame of most importance. For the following tests still pictures were taken.

Prior to making any measurements the test train was first run several times around my under house layout so as to assure consistent working operation.

Below is shown a perspective view of the draw bar pull test train consisting of 42 Aristo 100 ton hopper cars plus 1 Aristo track cleaning car on the end of the train. The train was chiefly position around the most severe part of the under house layout that includes the 270 degree loop back. This curvature results in increased wheel drag for a draw bar pull test.

A digital fish scale will be used for the pull test of this train. 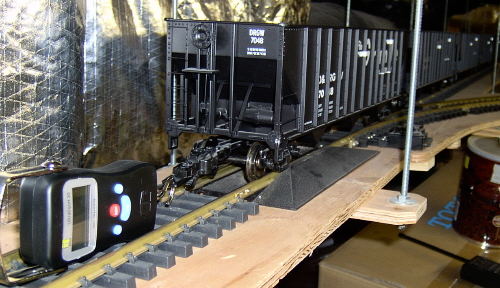 The digital fish scale used for the pull test is first allowed to be zeroed after its power up without any train coupler load tension applied. 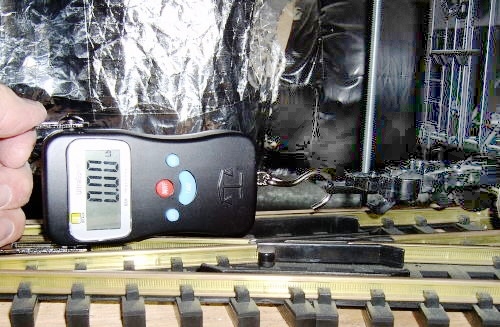 The following are the required start-up (static) force measurements to get the test train moving from a rest state:
(The measurements were made with the train being pulled in a steady fashion by hand grip of the scale's handle.)

Digital fish scale Static test measurement  1 of 8:
With the 42 x 100 ton hopper car train at rest and couplers in tension the
Static pull test measured 5.02 lbs just prior to bringing the train to a rolling movement. 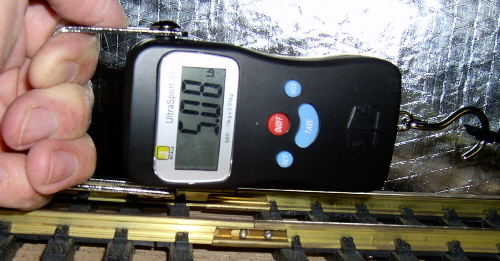 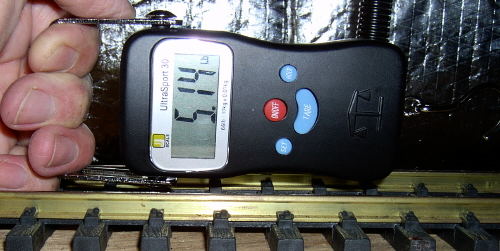 Results of the above static measurements:
The average of the 8 test measurements is therefore 5.11 lbs of force to bring the 42 x 100 ton hopper car test train to an incipient rolling condition.

The following measurements were made with the train having all its coupler slack taken out whilst being pulled in a slow, steady fashion by hand grip of the scale's handle:

The test train is hand pulled using the fish scale at a very steady slow roll when it measured 3.80 lbs. This is the first test measurement for a total of 4 measurements. 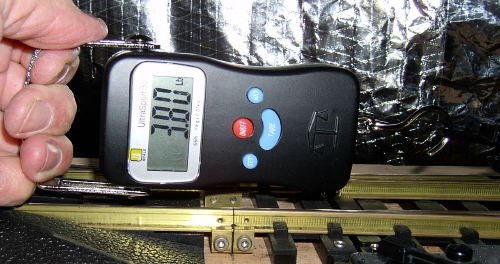 Below is the 2nd test measurement of 3.88 lbs 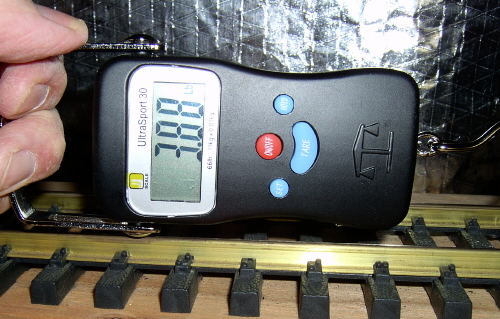 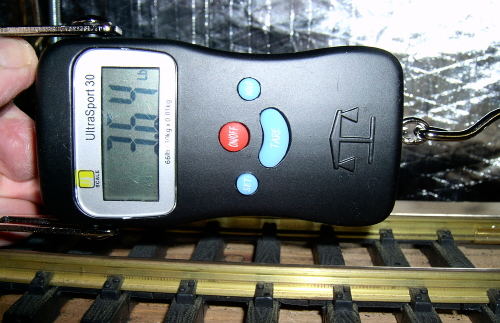 Below is the 4th test measurement of 3.94 lbs for a total of 4 measurements. 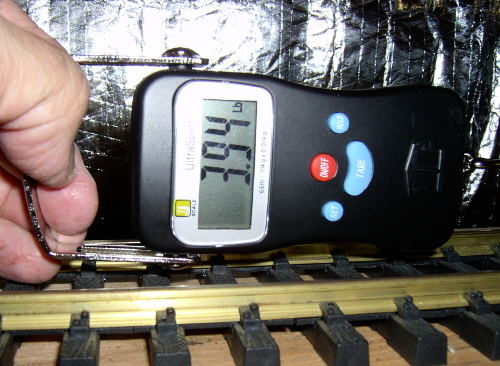 Results of the above rolling measurements:
The average of the above 4 test measurements is 3.82 lbs of force required to pull the 42 x 100 ton hopper car test train during a slow, steady roll.

Note: It has been my experience with this train on the described layout that if I exceed about 45 cars, coupler pull apart (without the knuckle opening) will result. The coupler/s did not pull apart on the test train during these tests. Once a coupler is stressed to the point of pull apart, I replace it as it then becomes unreliable at even lesser loads. I chose not to add more cars to the point of inducing coupler pull apart to avoid having to replace coupler/s.

Weight of the train cars & train vs. pulling force:

As to the weight of a typical Aristo 100 ton hopper equipped with metal wheels:

An example Aristo 100 ton hopper car is weighed using the digital fish scale with the car dangling. All the cars on the test train include metal wheels like this example car has.
This first of the measurements is 2.30 lbs.

Below is a close up view of this first of several measurements being 2.30 lbs.

As shown below, a second measurement of the same car is 2.48 lbs.

Thus, the average of the above two measurements using the digital fish scale is 2.39 lbs.

The same example Aristo 100 ton hopper car is now weighed using a digital postal scale as shown below. This measurements is 2.38 lbs. 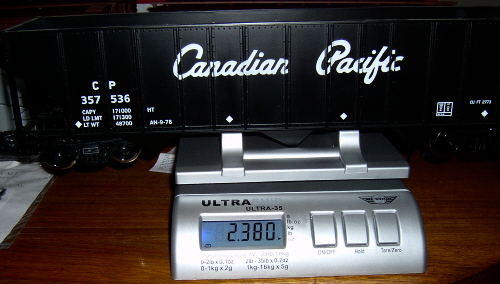 The same example Aristo 100 ton hopper car is now weighed using an analog kitchen scale as shown below. This measurement is approx. 2 lbs, 6 oz that equates to 2.375 lbs. 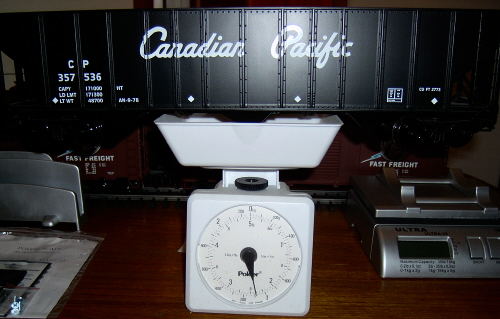 Therefore, all the scales appear to agree when averages are used with respect to the fish scale.

Shown below is the Aristo-Craft Track Cleaning car, ARCX46950, that weighs 1.86 lbs. as measured with the digital postal scale. The "rolling" drag of this individual car measured 0.18 lbs. (not shown using the digital fish scale). This represents about 10% of the car's weight to pull it and is mostly due to its abrasive pad as the car's wheels are slightly off loaded whilst the car sits on its pad when operating on the layout tracks. 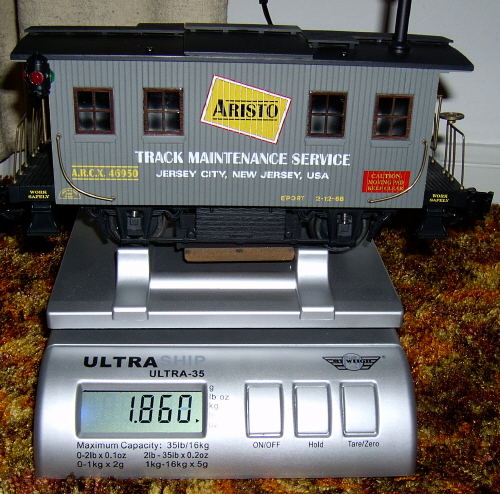 Since the test train is composed of 42 100 ton hopper cars and 1 track cleaning car, the total car weight is about 102 lbs. Since the test train was pulled with a measured averaged of 3.82 lbs., this represents about 3.75% of the train's collective weight to pull it - in this case without having coupler failures, but given my past experience, fairly close to it.

As to an Aristo knuckle coupler strength test, I used previously failed couplers not wanting to destroy new, good ones. (Once they are stressed to the failure point, they seem pre-disposed to fail with less force in a worse way.)

A coupler strength test is performed on previously failed and removed couplers from a long train. The test consists of using a digital fish scale and two such couplers fully coupled together with progressive force applied by hand to the lower coupler's attached chain.

The digital fish scale is first powered up and allowed to be zeroed without applying any load force on the lower coupler chain.

Below the digital fish scale is shown to measure 9.58 lbs of load force just prior to the lower coupler knuckle unlatching due to the force. A good coupler will withstand more force.
(It took some practice to do this using a still camera - realizing a motion picture would be a better way to get a more precise reading right at the coupler failure time.)

Below the digital fish scale is shown to measure 10.62 lbs of load force just prior to the lower coupler being pulled away without either coupler knuckle unlatching due to the force. A good coupler will withstand more force.

Comment:
Particularly significant for good operation of long / heavy trains is starting out with all the couplers in an initial slack state. This way the train cars start moving progressively from their rest state. (I typically operate the locos with a very slow starting speed.) This type of train operation has worked well on my layout.
When I stop such a train, I do it slowly and allow it to come to a complete stop, then back it up somewhat to take out any coupler tension. I do this as a precaution to assure removal of any residual coupler tension that may possibly create long term cumulative stress buildup with the couplers.