The Aristo locos & rolling stock used to illustrate the turnout issues in this article are equipped with standard Aristo plastic knuckle couplers. The cars have Aristo, ART-29111, type metal wheels. Moreover, the merits and  benefits of train operation afforded by proper wheel gauging and comparative body mount to truck mount coupler arrangements will not be addressed in this article.

To begin - a description of the guard rail problem will be discussed with respect to both
Aristo-Craft's #6 and Wide Radius turnouts' guard rail flangeway clearance as follows:

Since I had received my dash 9s and attached them to a 38 car 100 ton hopper train I noticed a tendency for the attached train's first car wheels to bump the edge of the guard rail lead-in section whilst sometimes also bumping the frog divider. This typically happens on the diverging curved section as the train traverses it and sometimes causes a derailment.
Using an MUed SD45 as a trailing loco attached to the train helps to avoid the derailing; however,
one can still see and hear the "bumping" action of the first train car's leading wheels.

No doubt the locos' body mount coupler does exert outward force on the lead car's truck mount type coupler - thereby forcing that car's wheels toward the frog and risking derailment as they strike either or both the guard rail's edge and frog divider.

That said, I came upon a back issue of an NMRA Scale Rails February 2004 issue.
In this issue is published a proposed track work standard that includes: "S-3.2 Standard Scale Trackwork" and "S-3.3 Trackwork, Scales with deep flanges".
These appear to be applicable to turnouts of various scales, including scale names of #1 and G.

Of particular significance is the "F" specification for "Flangeway (max)".
For both #1 and G scale it is apparent that the specification is 0.106" max between guard rail and main rail whilst this value is increased (relaxed) for G scale to 0.131" for the "wing rail" guard closest to the frog.

Out of curiosity, I went out and measured a real 1/1 prototype turnout guard to main rail and it was
about 2 inches. Factoring this down by 1/32 results in approx. 0.062". (The #1 gauge track is 1/32 scale owing to the space between the rails being 45mm - or 1.75 inch.) Of course, I realize Aristo's wheels are not prototypical in their dimensions so one can't claim to have a prototypical guard to main rail clearance - but this does offer sort of a "ball park" comparison.

However, it does appear Aristo's # 6 and Wide Radius turnout versions as previously defined do not meet the proposed NMRA standard as both turnout types clearance is too much.

If both the clearance and transitional shape of the guard rails are improved upon a much better train operation will result, thereby, allowing a more tolerable acceptance in wheel gauge variations and rolling stock lash ups having a mix of truck &. body mount couplers.

Now to illustrate with a few pictures:

Aristo #6 Turnout diverging guard rail clearance appears to be too much.
(Note the rather abrupt end with somewhat of a beveled transition.): 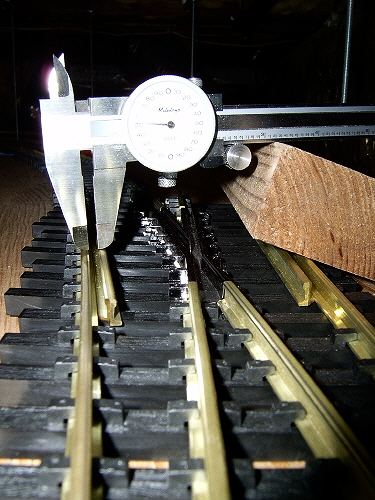 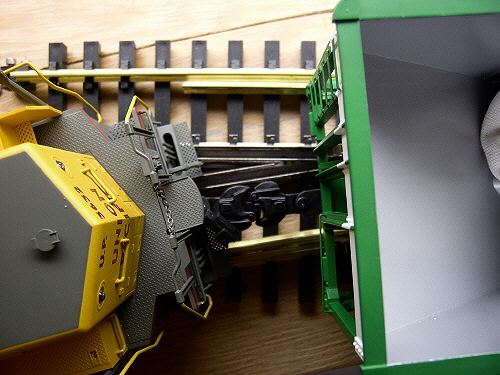 First car of train with its wheel hitting the Aristo #6 turnout frog divider: 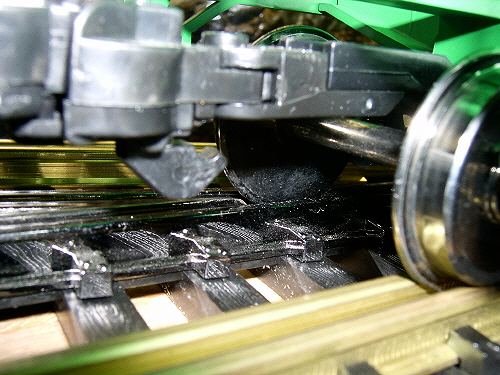 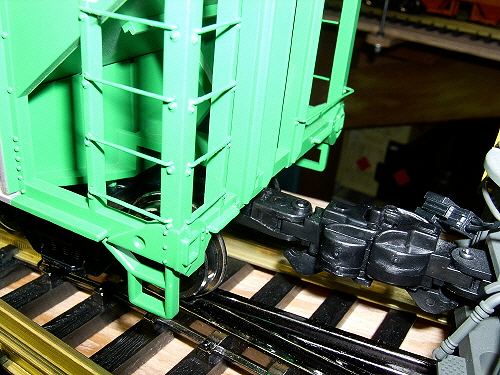 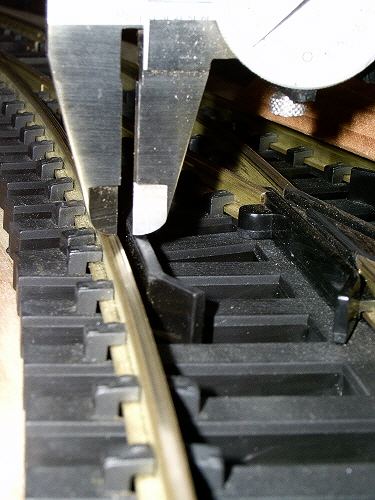 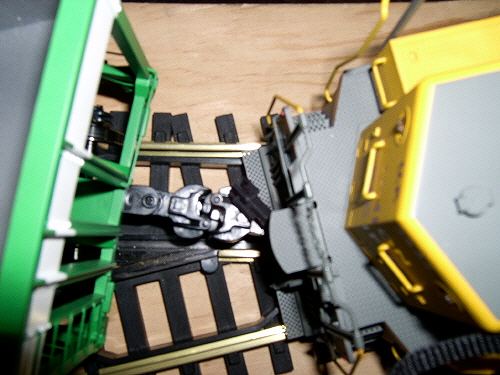 Now for the #6 Turnout and its guard rail fix:

Prior to my modification of the guard rails, trains operating over the #6 turnout would have the first car with truck mount coupler type (when attached behind a loco with a body mount coupler) strike the frog divider point with its wheel, consequently risking or causing a derailment. Moreover, this happened to nearly all my Aristo Streamliner passenger cars when traversing the #6 turnout. With the Streamliners, a leading truck wheel of nearly all the cars in a train would hit the frog point irrespective of whether or not the car was the one attached to the loco or which path through the turnout it went.

(Comment: Other users have performed guard rail modifications to the Aristo #6 turnout prior to what I have done, but I would like to share what I have done as described below.)

The first thing I did was to remove the guard rails. I decided to use the same mounting holes meant for the original guards as they are fairly large in diameter, thereby allowing the repositioning of a guard rail closer to the main rail. (It should be appreciated that shorter length guard rails than the ones I fabricated may be used if one decides to drill new mounting holes in the plastic ties so long as you ensure good coverage opposite the frog’s flange ways.)
For the diverging section guard I cut a new rail about 9 1/4 inch long and bent short transition ramp "wings" at either end. I then ground off enough material from the base to allow its rail head to be positioned at approx. 0.105 away from the adjacent main rail head. This value was chosen based on a published NMRA preliminary specification of 0.106 inch with respect to such clearance. I also notched the base of the guard rail near either end for its “wings” to clear the plastic tie strip “fish plates”. For the straight turnout path, I used the former guard rail taken from the diverging path since it is slightly longer and modified it similar to the new diverging guard rail.
I then drilled and tapped two new holes on the base underside of the new guard rails positioned so they would mount into the original tie hole locations of the turnout.


The following pictures serve to illustrate the guard rail fix:

Aristo-Craft #6 Left Turnout showing factory installed diverging guard rail measuring 0.145 inch clearance between adjacent main rail. (This clearance amount is way too much, causing the wheel of a truck mounted coupler type car - when pulled by a fixed mounted loco coupler of a Dash 9 loco - to strike the frog divider, resulting in derailments): 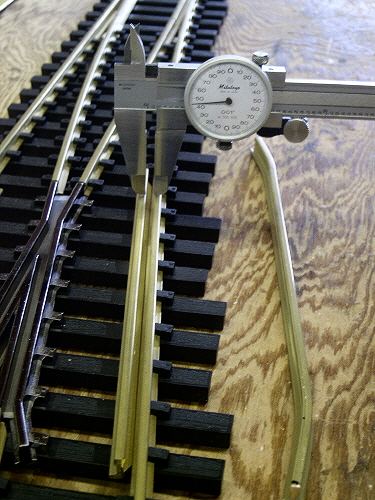 Replacement diverging guard rail, top and bottom views. (Note the notches near either end for tie plate clearance. The straight path guard rail did not need to be notched): 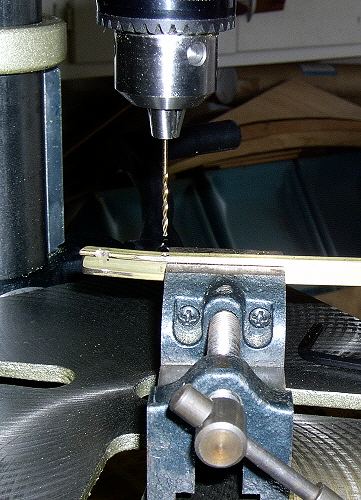 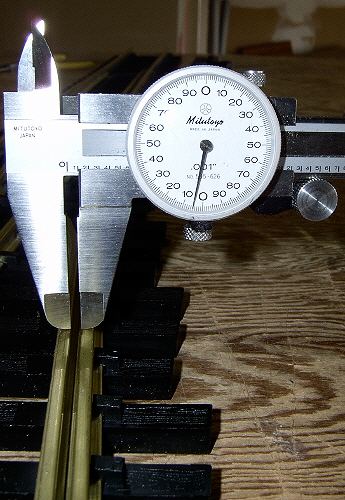 Aristo #6 Left Turnout as installed in Layout with its two new guard rails: 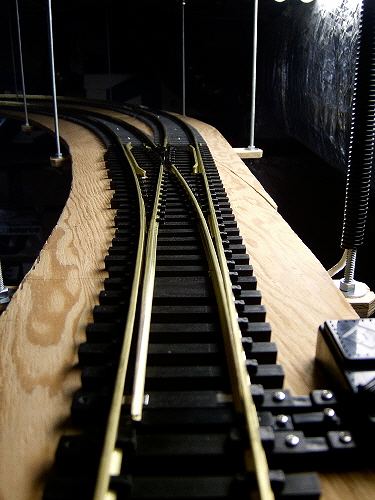 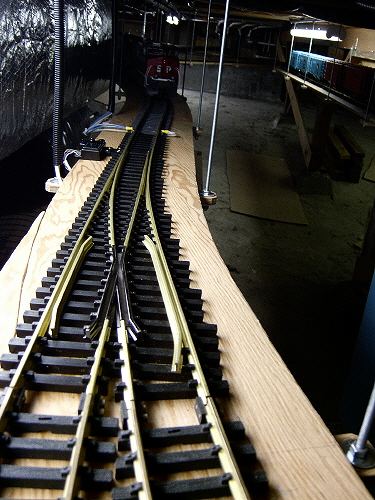 Train of 40 Aristo 100 ton hoppers & 3 RoadRailers being pulled by 2 dash 9s back to back through Aristo #6 Turnout with new guard rails. (Note the nose of the trailing SP dash 9 is now able to pull the first car past the frog point WITHOUT its wheel flange hitting it and derailing.) 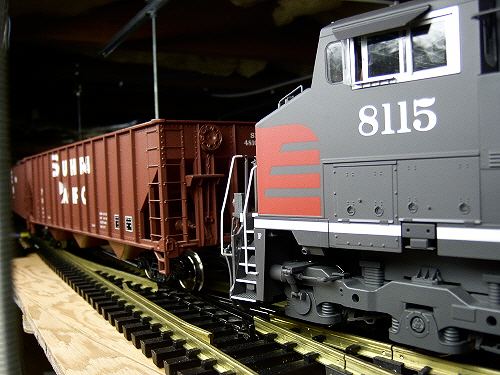 First car 100 ton hopper with truck mounted coupler being pulled by body mount coupler of GE dash 9 is now OK going through frog point without its wheel flange hitting it. 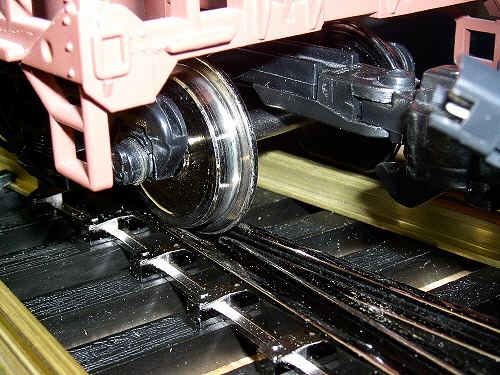 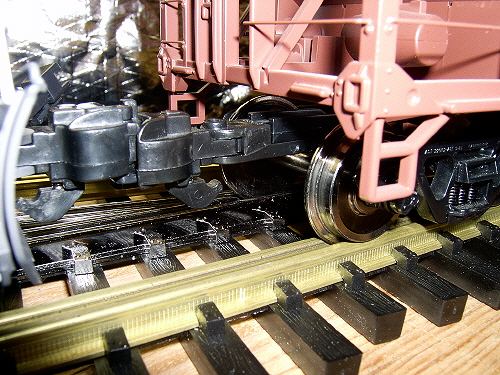 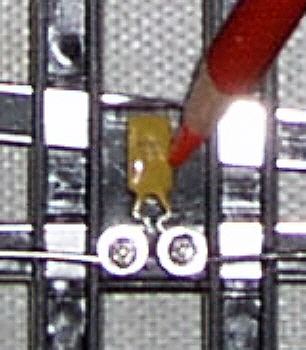 The # 6 turnout micro switch serves to direct the proper track voltage polarity to correctly power the metal frog in correspondence to the points' position. The # 6 frog is fairly long in length, and it is desirable to power it, particularly with track power applications for small locos when traversing the turnout so they won't stall out which can happen if an electrically insulated frog were used like those commonly employed in the smaller turnouts. 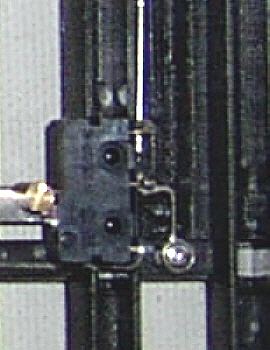 The tail rails and frog electrical connections via bare bus type wires can be seen on the underside of the # 6 turnout.

The # 6 turnout frog end gaps are required to avoid an electrical short to the non selected path rail as determined by the points' position micro switch.
(Note: Some folks have reported the gaps closing up in outdoor environments and have learned to place an insulating material in the gaps to avoid electrical shorts. My layout is under my house so I have not experienced this.)
If in the event that the microswitch were not functioning properly, rolling stock with metal wheels traversing the frog would electrically bridge the frog gap causing a short circuit akin to placing a metal object across opposite rails and then feeding back to the track power supply source.
However, the circuit breaker will serve to disconnect the power path to the frog after some finite response time. It will then automatically reset itself, but if the short were still present, it would cycle off then on and repeat accordingly.
To my recollection, Aristo incorporated the circuit breaker with the intent to reduce the risk of a loco's wiring from being damaged in the event the loco were traversing the frog area under abnormal circumstances such as backing into the turnout with the points thrown in the wrong direction. This means you can’t run trains in a direction over the #6 turnout with the intent of the train wheels serving to push back the spring loaded points.

Making a template for the #6 Turnout in preparation of installation.
(Note: The following was done prior to modifying a #6 turnout with new guard rails.)

When I first built my under house layout the #6 turnouts were not yet available. In the meantime, I installed temporary nominal 3 foot straight track sections where I intended to place the turnouts in a cross-over configuration. I was able to arrange the placement of the 3 foot sections using templates.

The below PDF file link is the "template & size reference" drawing I used prior to the actual manufactured Aristo-Craft # 6 turnout (aka switch track with a diverging path ratio of 1 in 6).

Since the #6 turnout includes a nominal 3 foot long straight path, I substituted a 3 foot straight track section for each of the two anticipated turnouts required for a parallel track crossover.
I upscaled the drawing on a Xerox to approx. 400% to obtain the physical size needed.
It required 3 separate sections taped together to make one template. I made two templates and placed them on my layout's plywood track road bed to facilitate laying the tracks in the proper placement so that the two turnouts would just drop in place when I got them.


The below picture shows a partial view of the actual Aristo-Craft #6 turnout - depicting its "frog" and 1 in 6 diverging path.

Below are pictures of the results showing one turnout installed in one of the parallel tracks with the other having a template still in place:

Aristo-Craft #6 Turnout crossover picture showing one 3 foot straight track section yet to be replaced with the turnout. Note the paper template below the straight track: 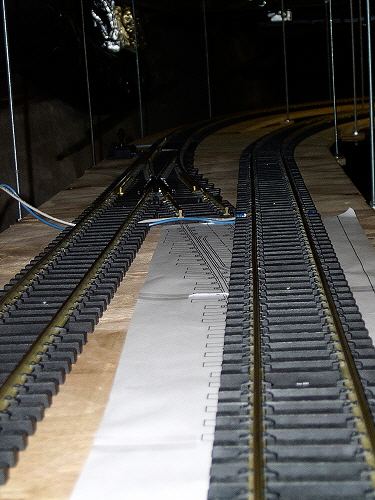 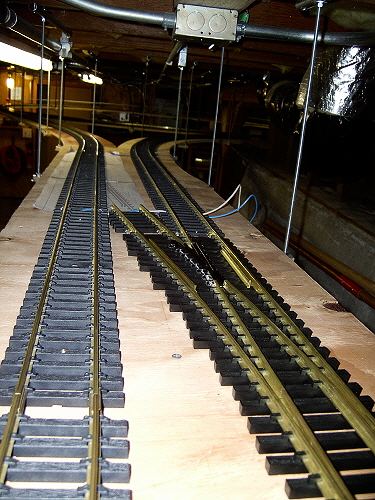 A few train operations on the completed track crossover are shown below:

Aristo-Craft #6 crossover with the 6 inch section track butted between the diverging sections provides for a 7 inch parallel track spacing and approx. 2.5 inch clearance between the passing cars on the straight parallel sections: 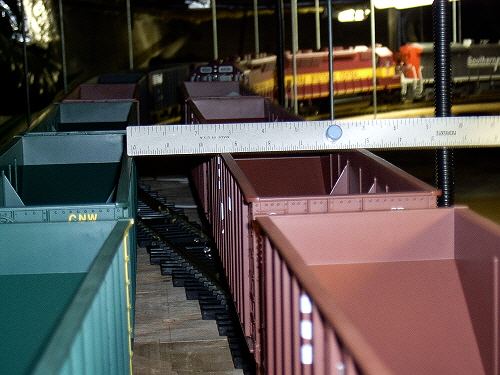 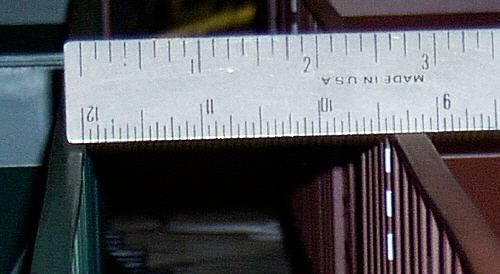 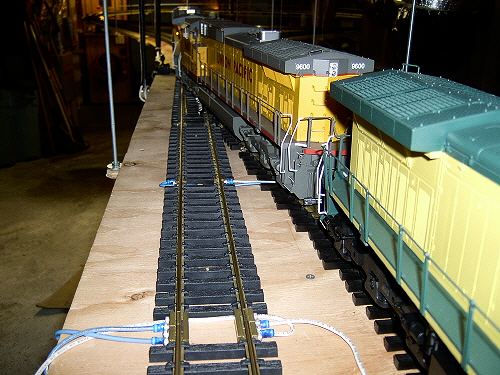 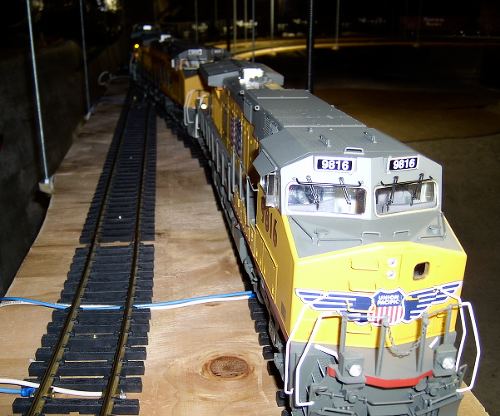 Aristo-Craft UP Mallet pulling train on No 6 crossover headed toward loop back shown in the background in a direction opposite than typical: 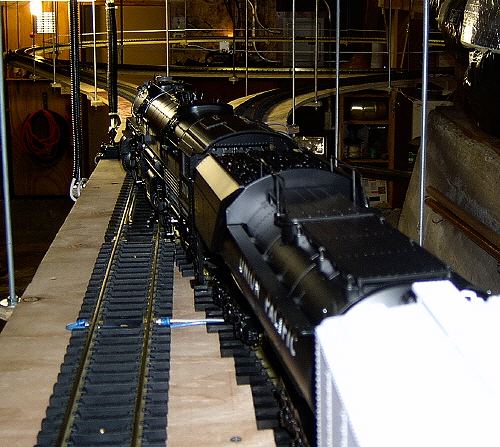 The crossover control for my under house layout:

The  #6  turnout pair used as a crossover is presently semiautomatic and is controlled by a small toggle switch.

Below is shown the wall switch used for power up of all Train electrical apparatus.
The 4x4 electrical box above the switch houses a home made power supply to control a 4 pole relay for loop back track electrical disconnect and polarity change when the up stream turnout pair is in crossover mode for the outdoor train path. The small toggle switch along with other circuitry controls both the crossover turnout points as well as the 4 pole relay. When in crossover mode, the Aristo RR crossing lapel pin as seen mounted on the electrical box will flash red. When the toggle switch is thrown for loop back mode the green LED is illuminated. (The Aristo lapel pin was adapted with circuitry to be a status indicatior for the crossover turnout points' position via feed back by their turnout motors' auxiliary switch.) 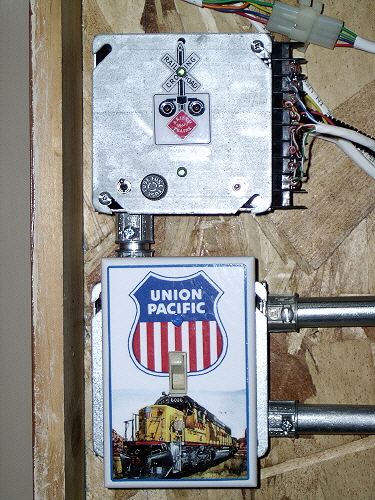 Shown below mounted under the plywood road bed is an electrical assembly, including the 4 pole relay, for loop back power disconnect and polarity change with red and green status LEDs. Green is status for under house loop back mode. Red is status for crossover mode when a train will go to the outdoor path. These status are in concert with the small toggle switch setting as previously described. 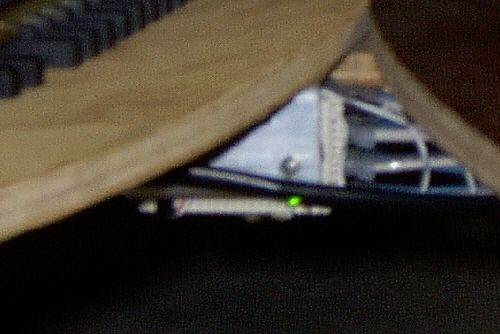