Note well: The "traditional" DCC track powered system uses the same throttles, so be sure which system you are working with.

This is basically DCC over the air with come caveats. While the DCC protocol and architecture was intended for a "lossless" communication medium (hardwired through the track), and basically unlimited transmissions over the rails to the locos, the system works quite well and is very popular.

You will note in some areas where there are control issues, since some compromises have to be made in this architecture. As a short explanation, typical DCC systems send many commands over the rails pretty much continuously, having the ability to send commands multiple times to a loco to ensure they get there.

When the throttle is wireless and on batteries, sending commands multiple times has a significant impact on battery life, so you do not have this luxury in AirWire and DeadRail systems. This is why you often have the "horn stuck on" issue, because sending the horn off command multiple times takes extra power, where a traditional DCC system can do this easily.

Because the system interfaces to most standard DCC sound cards, it's got some great advantages.The newer AirWire products have more powerful outputs, so virtually any DCC sound card can be added, more further on.

Airwire makes 2 throttles and there is a new decoder/receiver in 2009. The older decoder had limitations in operating voltage, sometimes requiring a regulator or "split battery supply". That's a thing of the past with the new receiver/decoder.

Recently, NCE modified their wireless throttle to work with the AirWire system, and it's great, and the only disadvantage is it is larger. For all the things you can do with DCC, I recommend this throttle to get the most from your system, and it has a greater ease of use.

QSI has also made an add on receiver to fit their successful all in one motor and sound decoder.

CVP also finally makes the equivalent of an accessory decoder, most often used to control switch machines. It takes 2 boxes to do this, one is basically the receiver, and the other is the accessory controller, which has no receiver. Clunky, and much more expensive than track powered DCC, but it's good to have the product finally.

In summary, you have the choice of 3 different throttles, and 2 different motor decoders, one without sound (but can be added) and one with integrated sound.

The new drop in decoders have another twist, it seems that the DCC "output" used for the sound card is not the standard "bipolar" DCC but unipolar (ground to positive only). Apparently this limits the choice of sound cards that may be used, in particular, the very popular Phoenix line of sound decoders, only the P8 seems to be supported, not the pure DCC P5, which is lower cost. I need to double check this information, but please verify for yourself before purchasing.

The T9000 is a metal plate with the electronics attached and in a Radio Shack project box. The fit into the box is not great, the front plate sticks above and has gaps. This is cosmetic, but I'm comparing it to other throttles that cost the same, that have custom plastic molded.

There is a small "shipping screw" that holds the bottom of the front panel in place, and threading the antenna on the top holds the guts in place. The manual recommends removing and discarding the "shipping screw". DON'T !.

A common problem with these throttles is the sudden lack of range. Turns out that the thickness of the plastic case makes it so often the center contact of the antenna does not touch the socket. Also using the antenna to clamp the guts in place is not a good design, it's easy to overstress this connection. (The NCE throttles are also sensitive to this, same connector).

I recommend that you enlarge the hole in the case to just allow the antenna body to pass through, and use the "shipping screw" to hold it together. IMPORTANT! Gently tighten the antenna, only light tightening is necessary, the center pin contact does NOT work any better being tighter.

Follow these suggestions and you will not break anything and always have a reliable antenna connection.

NCE has modified their very successful "Procab" to work with the Airwire protocol, called the "Gwire" throttle

In my opinion an excellent alternative, easier to use, backlit (with a simple mod).

There are some operational "gotchas" with the GWire.

First, the original AirWire system only supported 8 channels, but the newer ones support 16. The GWire throttle from NCE only supports the first 8.

Another is some programming restrictions. Here is a tip from Richard Eberwein:

That will get you to PROG TRK Screen

The original decoder / motor driver from CVP worked OK, but had some strange quirks.  The idea was a high power unit (rated 10 amps and maximum 120 watts) with a "DCC output" to "pass through" DCC commands to a DCC sound card. So a typical combination was the receiver with a Phoenix sound cars.

The first thing you learned was that if running with power input over 18 volts, you have to split the power and provide lower power to the electronics. The output transistors that drive the motor will run up to 28 volts.

There is also VERY confusing information about the power output capabilities. 10 amps max is specified, but it's in relation to the total power handling in watts. 120 watts is listed as maximum. I have seen CVP literature where a graph titled "Select Your Power Level" shows completely impossible combinations of motor current and voltage, i.e. shows 15 amps at 6 volts (90 watts, but over the 10 amp maximum of the transistors), and about 6 amps at 28 volts (within the 10 amp limit of the transistors, but 168 watts, over the power dissipation capability of the unit)

So a word to the wise: make sure your load is UNDER 10 amps AND UNDER 120 watts, and then you will probably be safe. I have heard stories that even these limits are beyond what the electronics can handle, so I would advise not pushing it to the limit.

6 volts is the minimum and 12 volts if running split power is usually optimal. Not that running higher voltage or reversing the input polarity will DESTROY (their words) the decoder and there is no warranty coverage for these situations. Be careful!

Now, with the new G2 receiver, the split power supply requirement is gone. Also the output to the DCC sound decoder is raised to a maximum of 3 amps. There are also a few feature improvements. The warnings about max current and power stand.

How do I choose?

For the throttles: (street price from RLD hobbies in 2010)

On the comparison between the Airwire Receiver + Phoenix vs. the QSI, I would say the major points are

Below is a diagram of Airwire receiver connections for running higher voltage batteries. 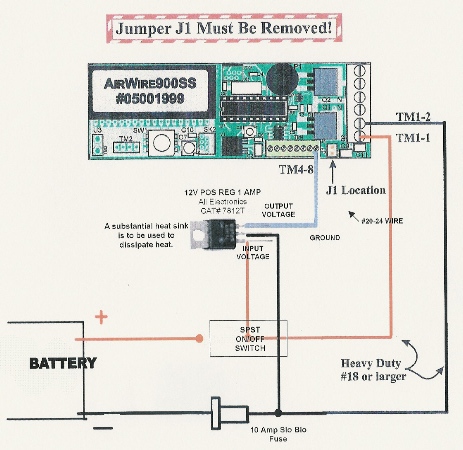 Can the decoder pick up power from the track?

This is not recommended or supported. But, yes it can be wired to do this. However, do not assume the batteries can be charged - lithium cells will not allow intermittent charging and doing so will damage the battery. However, 12 volt lead-acid gel cells can be used in this way. But, not only do you have to keep the track and wheels clean, but now you have to worry about electrical safety and reversing loops too. Thus, we don't recommend doing this since it negates all the advantages of battery operation.

Recently (2012) someone had a problem running a Tsunami from a CVP  AW9D10SS decoder.

It did not work until the tsunami leads were reversed. That tells us two things: The Tsunami only "looks" at one half of the DCC signal... (probably the positive half)... AND this particular CVP decoder only OUTPUTS a "unipolar" DCC signal, i.e only from zero to plus volts (or the reverse).

So if your DCC sound decoder does not work from an Airwire decoder, try reversing the track input leads on your sound decoder.

Paul Burch suggests you set the programmed sounds to level 1, not zero. Setting them to zero often shuts off all sounds.