Disassembly of the Mallet

Lay the mallet on it's back, be careful of the detail parts! (a padded cradle is a good idea)

There are 4 screws on the belly of the mallet, near the pivot point of each prime mover. Remove these. I used a small pair of tweezers to grab the screws so they did not drop down into the loco. In the photo below, the screws are indicated by the red straws, the other side of the boiler is a mirror image, so remove the other screws on the other side:

Once you have removed the 4 screws for a drive unit, you will see there are plugs for the wires to the units, one plug for the rear prime mover, and two for the front. Don't worry, the two for the front are different sizes. (the yellow straws are the screws to remove the boiler, leave those alone for this operation).

To disassemble a prime mover:

First there are 3 sizes of screws: Large, small, and tiny. Don't worry about any other differences. I'll use the above terminology in identifying the screws during disassembly.

The rear assembly can be laid upside down without hurting anything.

Remove the large screw and washer that holds the rear pilot truck and drawbar.
Remove the 2 tiny screws the hold the rear brake hangers. Then 2 large screws remove the mounting bracket the hangers screwed into. Removing the bracket reveals another small screw that helps hold the gearbox housing together, remove that.

The middle 4 brake hangers can be easily removed. Place the prime mover right side up. Pop the tops of the brake hangers out slightly, that will disengage them from the unit. Then flip the unit upside down, and by wiggling a brake hanger in and out a bit, and using a small flat blade screwdriver in the bottom (now facing you) you can work the brake hanger out. Take your time, this friction fit is what holds the bottom of the hanger in.

Now you need to remove the screws that hold the gearbox housing together, there are 2 small screws in the very front, 2 large screws at the rear of the cylinders, and 6 small screws between the drivers.

After all of this, you should be able to gently lift the cover off and reveal the motor, flywheels, and gearboxes.

Place the gearbox cover back on. Be careful not to pinch the tape that covers the end of the motor between the two halves.

Now install the 6 small screws between the drivers.

Don't install the two large screws in at the rear of the cylinders yet, they need to be loose to reinstall the brake hangers.

Install the single small screw at the very back center, then the support bracket with the 2 large screws (it has a cutout for the small screw, so it can only go one way). Be careful tightening this bracket, the screws only engage a few threads, due to the thickness of the gearbox housing.

Reinstalling the brake hangers is the reverse of disassembly, get in in rough position, then put the bottom (square) end into the bottom of the gearbox cover, and then push it mostly all the way in, especially "up" into the gearbox cover BEFORE you try to snap the top end in first. If you try putting in the top end first, you can break the little tabs that hold it in place!.

Flip the assembly upright, remove the 2 tiny screws for the valve gear hanger, lift it up enough to put the front 2 brake hangers back in place.

Now that the front brake hangers are in place, put in the two tiny screws for the valve gear hanger (top), and the last 2 large screws that hold the cylinders on (bottom).

Put in the 4 center brake hangers.

My mallet was tight here, the hole for the pivot needed opening and greasing. Inserting the screw makes the post larger, and there is virtually no play.

Now reinstall the rear brake hangers with the 2 tiny screws.

The only screws you should have left are 4 screws (per prime mover) to bolt it back to the loco.

There are 6 small screws on the "edges" of the boiler, 2 in front, at the back, and 2 in the middle, a bit hidden. In the picture below, these are the yellow straws. Don't touch the large 2 screws in the middle of the boiler, while inviting, they hold the boiler weight only! The red straws will remove the motor units, which you can leave in place.

After removing the 6 screws, wiggle the upper part of the boiler near the front side to side, and slightly pull forward as you take the cover off mostly straight up. In the picture below you can see, from left to right: the small board that has the sockets for the front drive unit and the smoke unit, the lead weight, and the main board with the Aristo socket:

The photo below is of that small board for the front drive unit and the smoke unit. You can see the solder blobs from the 5 and 4 pin connnector on the other side. The black and red wires in the foreground go to the smoke unit. The socket should be for the front light. (I need to check this) 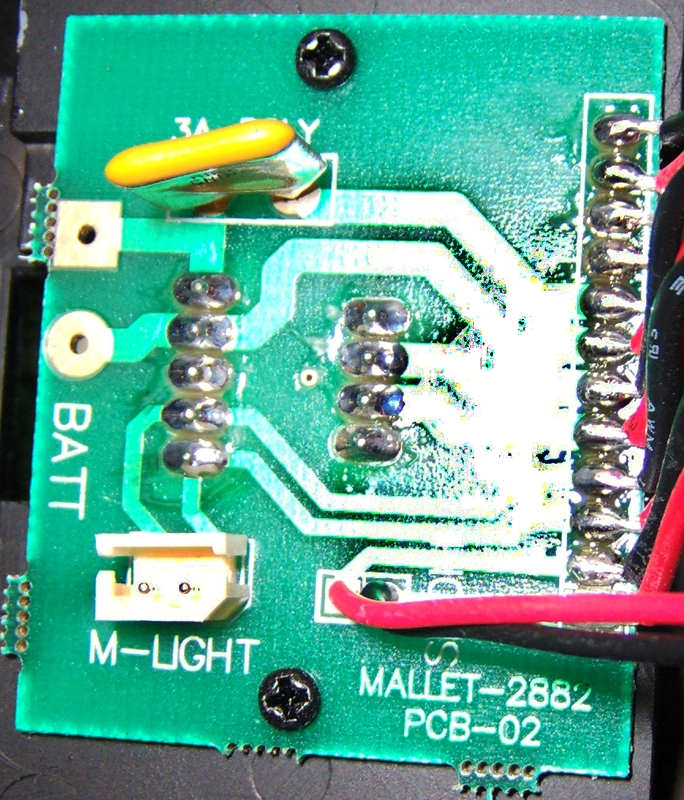 Here's the smoke unit and it's little board you find up inside the top half of the boiler: 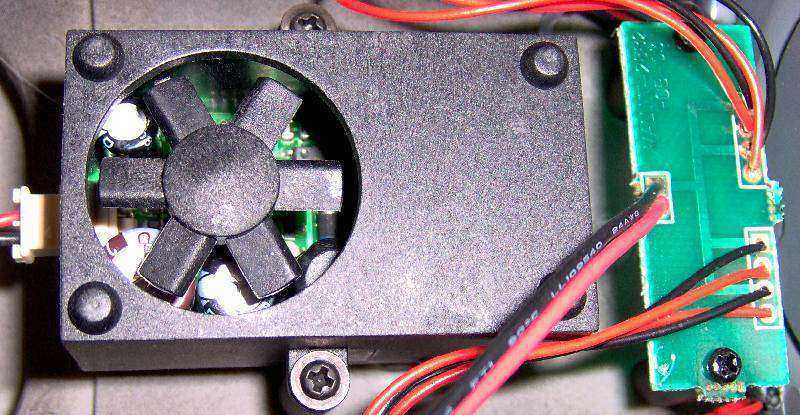 The picture below is the main circuit board. Notice the dummy plug in the middle of the board. This is removed when you put in a plug and play decoder. The dummy plug just connects the track pickups to the motor and lights, and connects the power to the smoke unit. 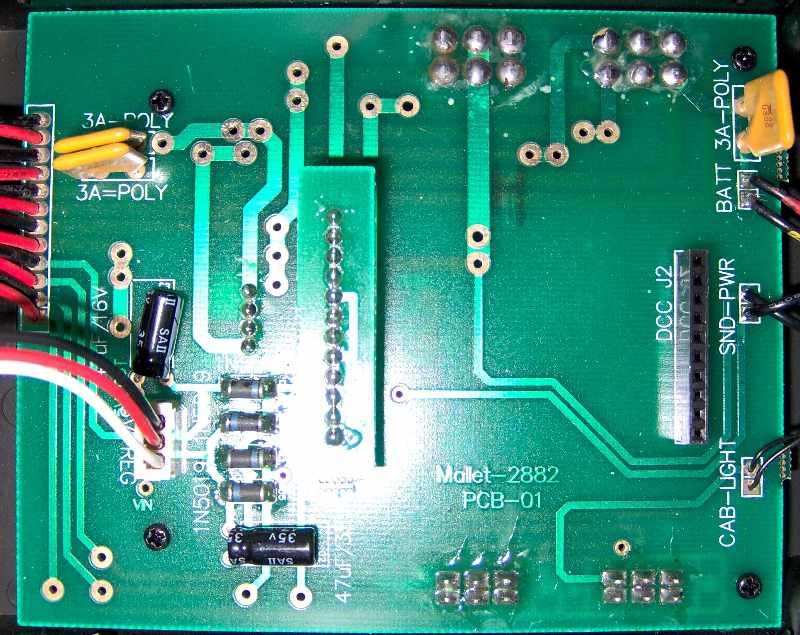