I currently have five AML 40 foot single door box cars (4 Cotton Belt and 1 Frisco).
These cars are nicely detailed and their trucks are made of metal; however, the cars as they come right out of the factory box roll along the track as though they are going through a bunch of rocks! Most of the wheels include a rough to the touch tread surface that further diminishes smooth rolling. Not all wheels appear to be made the same way, too, as for example, my Frisco car includes one axle / wheel set that is brown in appearance whilst all the others are black!

As will be shown in an example truck, the AML cars exhibited excessive axle side play in the trucks for the cars I acquired. This can result in excessive drag when cars are operated on a layout's curved tracks as the axles will "walk" to opposite extremes within a truck.
The cars I have also did not include any factory lubrication for the axle tip / journal box areas. Moreover, the front axle shafts of these trucks sometimes bind against the coupler tang, particularly if the side frames are tightly secured to the bolster with the torquing down of the attaching screws as would normally be expected during factory assembly.
Furthermore, if using the AML truck mount couplers as I do, the front axle shaft can bind against the plastic coupler's pigtail centering element.
Additionally, the screw that retains the truck mount coupler must be left just a bit loose to allow the coupler to pivot, but doing so invites the screw to work loose and fall out during operational use.

Below are pictures illustrating the problems along with suggested solutions.

Below an automotive feeler gauge is used to measure an example axle side play:

Depicted below, the axles are pushed to their opposite extremes within a truck, and clearance measurements are made at each end of an axle. There are two wheel face to side frame clearances for each axle  - an upper one and a lower one as shown in the following pictures:

The lower clearance measurements are shown as follows: Adding up the upper clearance (0.090 inch) and lower clearance (0.202 inch) measurements results in total of 0.292 inch. To essentially center the axle within a truck whilst taking up its excessive side play, I used two 0.065 inch thick nylon washers placed at each axle tip end (4 total washers per axle - consuming 0.260 inch of slack) as shown below. This still allowed for some necessary side play clearance sufficient for the axle to freely rotate within the truck assembly: There is a tendency for the front axle shaft to bind against the truck coupler tang as evidenced by the wear bands on the shaft as shown below. With the truck side frames completely torqued down to the truck bolster there is virtually no clearance afforded as can be seen in below example AML Frisco car: Below is shown the metal truck bolster coupler tang wear marks from the axle shaft interference: 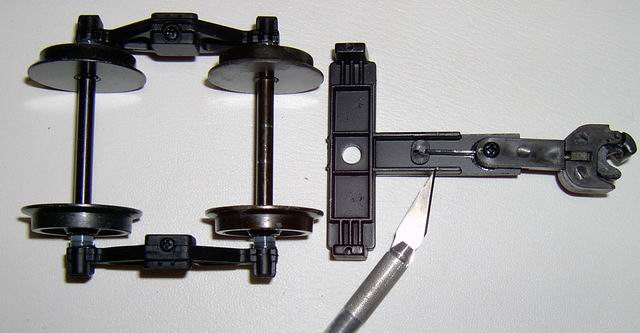 Additional clearance is afforded by filing a small amount of material away to allow for the front axle to freely rotate. (Note that the plastic coupler's pigtail must be trimmed, too, as shown on an example Cotton Belt car below.): Whilst installing the nylon washers, I lubricated each axle tip using automotive Moly Paste as shown below: 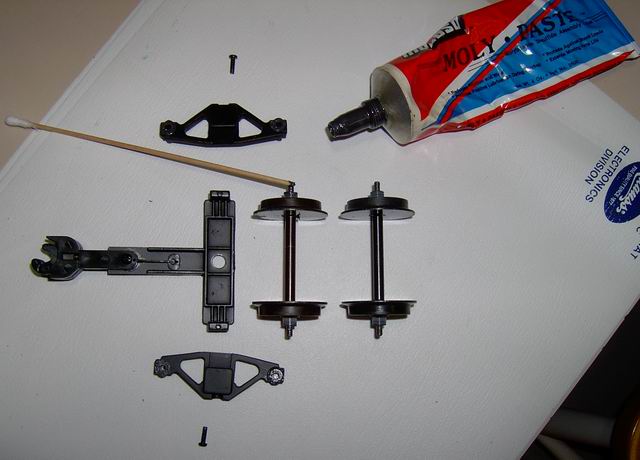 Truck re-assembly is shown below:
First place both the side frames on the axle ends to make a subassembly than can be picked up with your hand. 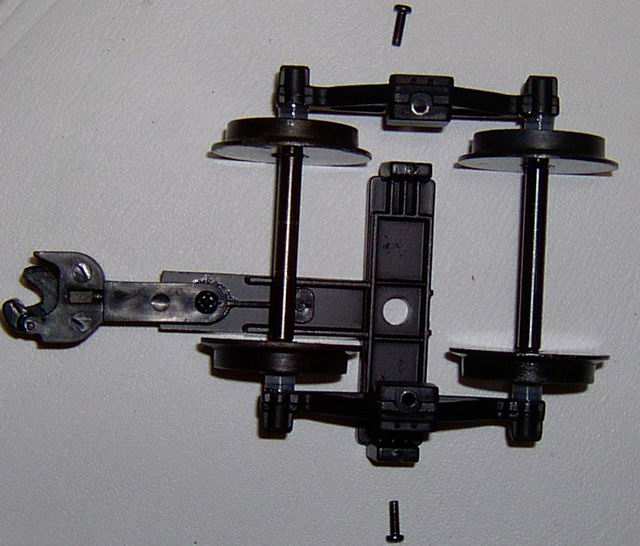 With the nylon washers added, the side frames / axle subassembly just about drop right onto  the bolster posts with very little effort: 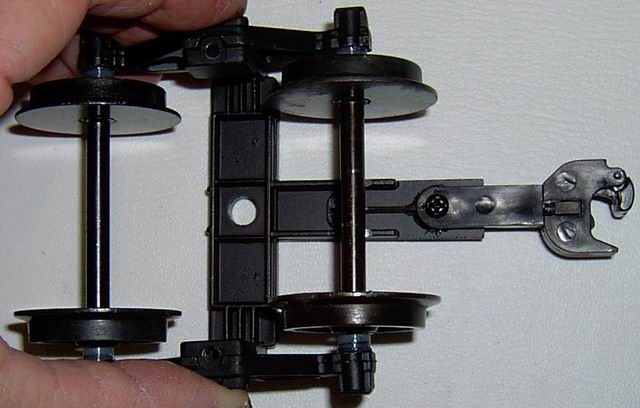 Torquing down the side frame attaching screws to the bolster posts no longer results in front axle shaft binding when the metal coupler tang is pre-trimmed: 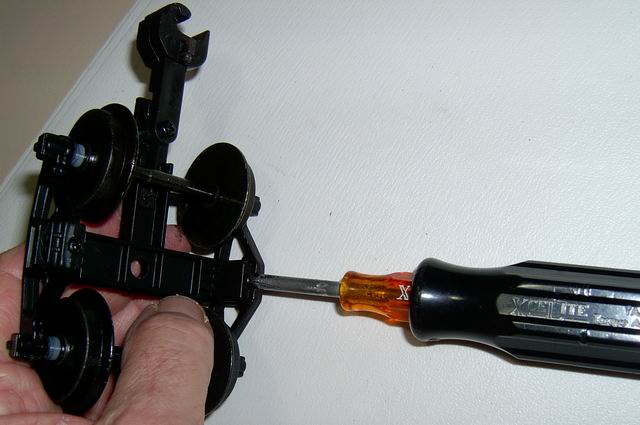 Loctite Thread locker 242 is used to secure the coupler mounting screw.
(Whilst holding the truck assembly in a horizontal & level position, first back out the screw just short of it completely coming out of the metal tang, then put a drop of Loctite in the threaded hole, then run the screw back in until it is almost snug against the plastic coupler so that the coupler will still pivot. Then let the Loctite dry.) 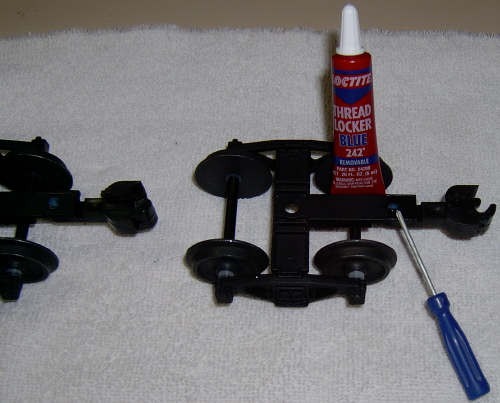 As shown in the below picture, the truck on the left is the as delivered AML car example truck and the truck on the right is one with nylon spacer washers added to minimize axle side play.
As can be seen in the below picture, coasting the trucks on the 8 foot diameter track from right to left will result in the tendency of the axles walking in opposite directions within each truck (axles are skewed). However, the truck on the right with the washers exhibits minimal axle skew thus less drag around curves (minimal wheel flange angle of attack at the rail head):

Moreover, with the trucks having sufficient front axle shaft to coupler tang clearance and all axle tips lubricated they roll noticeable better than the as supplied AML factory truck.

I have not yet addressed the rough wheel tread surface issue, but it may be that with enough operation, this will wear to a smoother finish - serving to further improve rolling characteristics.