(I intend to replace the electronics with a DCC decoder.)

There are 3 boards in the docksider. One has 4 switches, smoke, motor, sound, light.  This one will be discarded to allow a larger speaker and room to enclose the back of the speaker.

The main board has a small daughter board on it. It has a pot that works as the volume control, labeled as VR. CCW increases sound.

On the daughter board are 3 ICs. The 8 pin package is a TDA2822, which is a dual, low voltage audio amplifier by ST Microelectronics.

The other 2 ICs are EM57P300AP,  by ELAN, which are sound processors with one time programmable ROM and processor, which only need a single external transistor to drive a speaker, and have inputs to trigger the sounds. They will run at about 3 volts and need 5 volts max.

So it's clear this is the sound board for at least the bell and whistle... maybe the chuff too. I'll have to listen to the sound and see if the chuffs cut out if either the bell or whistle is sounded.

The main board has a pot VR2, of unknown function.

The unit has a hall effect chuff sensor to trigger the chuffs.

How is the sound?

The bell sounds nice, the chuffs suck, and the whistle does the same sequence every time.

Also note that USAT says that the sound system will not function over 17 volts. (!!)

This is evident even in USAT's promotional video (see at time 3:28 )

My guess is that the magnet is triggering the hall effect sensor twice.

I think my guess is right, put a bit of ferrous metal near it, and the double chuffs stop! I will experiment to see if I can fix it by moving the hall effect sensor away from the gear that has 2 magnets on it. (This is the same gear that has the rod to make the puffs.)

OK, so the next thing is to figure out the smoke unit power requirements and also the circuitry to sense the chuff magnets.

There is a 3 pin device that senses the 2 magnets on the gear wheel that also drives the smoke piston. The wires are red, yellow and black, and go to a socket on the main board labeled "CUFF".

I note that the wires from the magnetic sensors for the bell and whistle come up from the motor block as 3 wires each also, so I suspect they are also using hall-effect devices there.

The smoke unit has 3 leads, red, yellow and black. 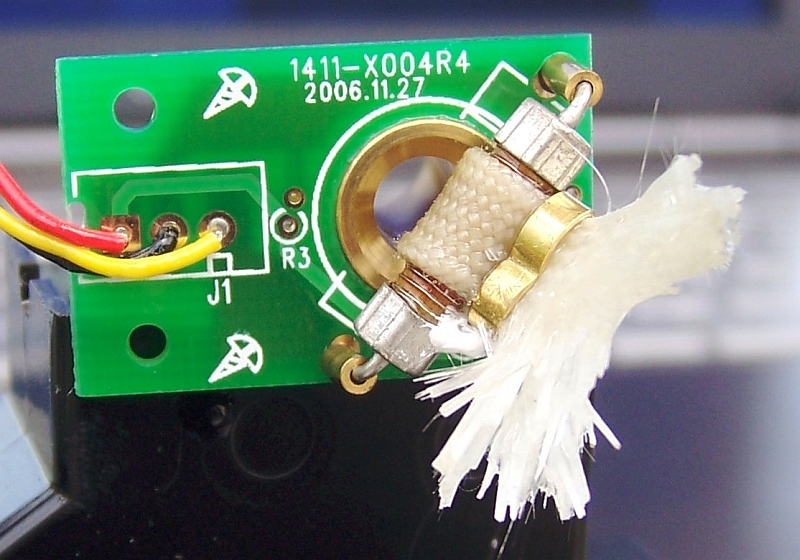 The reservoir is not large, with the wick out, it will hold 1.5 cc before spilling into the hole where the air enters. I would recommend 1 cc as a good measure for a dry reservoir.