Bachmann released it's long-awaited K-27 early in 2008. Well, there were a number of problems, and it was quite a subject of controversy. I will update this sporadically, since I do not have one, but I have been intimately involved in the controversy, that's for sure! The second version has eliminated the loose counterweight issue.

The counterweights that the valve gear connects to, and that powers the drivers are very loose on the axles in the first run locos. This is pretty bad, it can cause complete locking and destruction of the valve train. Often the counterweights can be rotated as much as 20 degrees in respect to the axle. It turns out that the #3 axle is often not as bad as the others.

The first person who really figured out what happened was Dave Goodsen, TOC, if you know him from forums.

I'll keep the politics out of this except to say that Bachmann should have never stopped asking him to go over new products as it had done for years.

Dave shimmed the counterweights and all was well, although early on Bachmann and some other people foolishly insisted that it was that way on purpose.

Now, in March 2008, replacements have been slowly available, and the second batch of locos have had them retrofitted.

There are also issues with wiring interfering with the up and down motion of the 3rd axle, the solution is to reposition the wires.

There are quite a few electronic innovations (at least someone charitable could call them innovations).

They have their good points and bad points. There is still more verification of these items I need to do.

This was a rushed thing, and it does not meet the established standard. In retrospect, it was a good experience, it brought focus to the strong feelings of many groups. Many people liked the basic idea, but were not sure of the implementation. Many people indicated that the electrical interface was not robust enough for the current requirements they expected. Many people were a bit "rabid" about the volume it took from the loco.

When we finally got the loco, the boards in the tender DID take a lot of space, not really efficient. Some people were determined to tear all the boards out in the beginning, saying the space they took, and the electronics were not worth it.

Some individuals were somewhat successful in using the socket. I need further verification, but the Aristo onboard TE, the QSI were both reported to have "mostly" work.

Bob Grosh was bound and determined to investigate and use the electronics. He worked 3 weeks, and got a lot of grief from the "tear it all out" people. After 3 weeks he gave up. There are a lot of electrical "quirks" in this loco. In retrospect, it was not insurmountable.

Tony Walsham has come out with a board that will plug and play, and has gone to lengths to get this to work.

I was involved in the NMRA large scale interface group, but that was a smoke screen to make things look good, so again politics and the inability to bring manufacturers together as well as many individuals, went nowhere.

Interfacing to the chuff circuitry.

The Bachmann chuff circuitry has 2 optoelectronic sensors triggered by a baffle in each cylinder.

(see the links below for the schematic and wiring diagram)

So, you have positive supplied when no piston, and the output is pulled to ground when the piston is passing the sensor.

To connect the 2 sensors together, you typically use diodes. The bachmann circuit uses them in a way that would not be the "normal" way. This connection causes the output to source voltage most of the time, and be in sort of a neutral state when the piston passes the sensor. So, what you would connect here would be an input that can "pull itself" to ground, i.e. an input to a sound card that reads high as being supplied voltage, and the absence of voltage as low.

Again, normally low, goes high when you want a chuff.

A 2N2222 or other small signal "switching" transistor can be used. 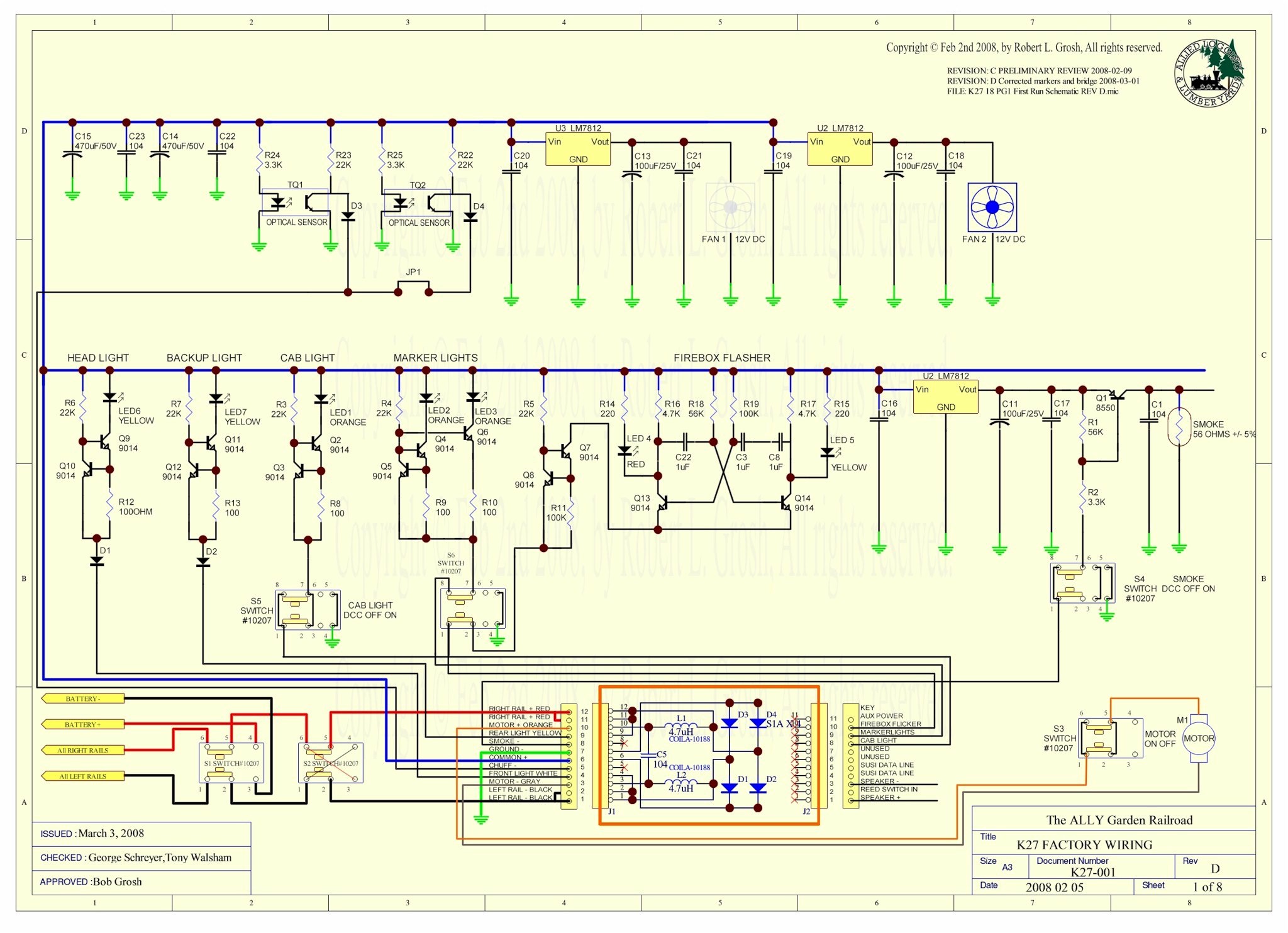 (pictures courtesy of Mike Reilley, text from posts on MLS by Bob Grosh and Mike) 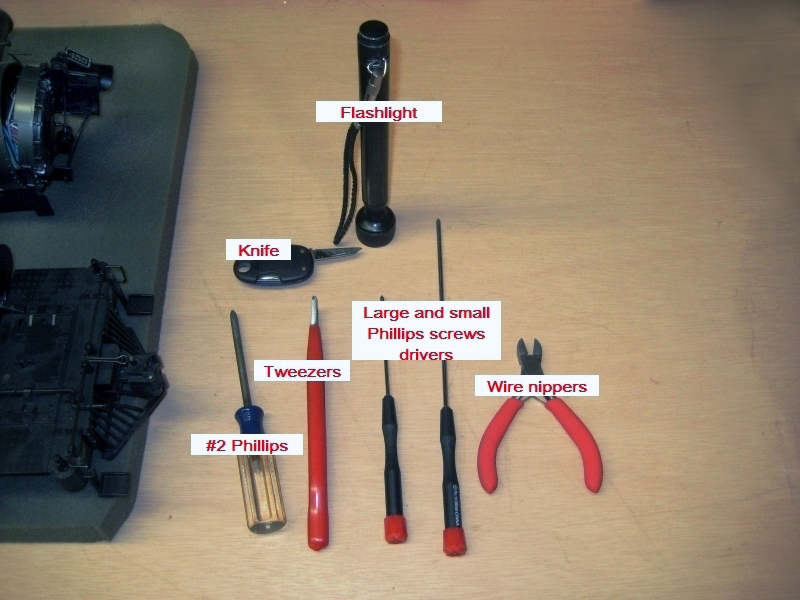 Below is an overview of the parts that will be removed for removing the boiler. In this case, Mike removed the motor to fit an additional gear reduction drive: 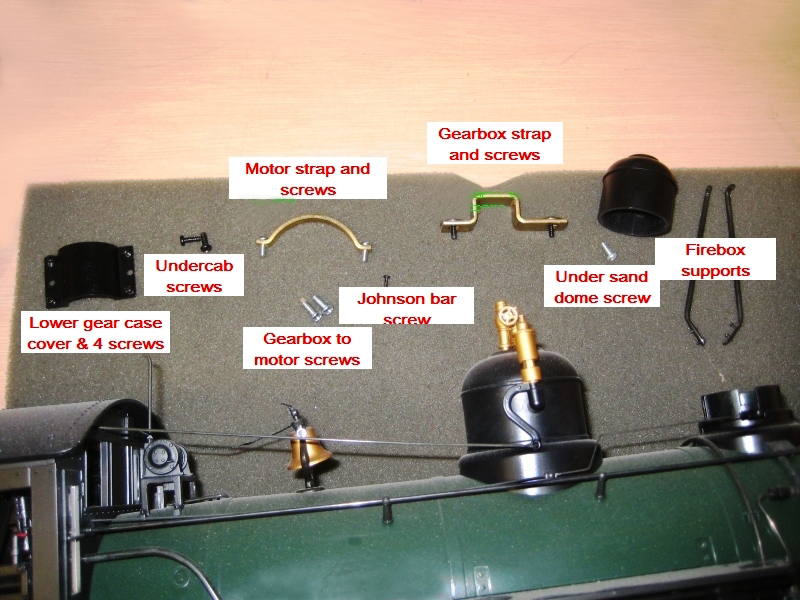 Begin by disconnecting the Johnson bar linkage, since part is in the boiler and part on the chassis: 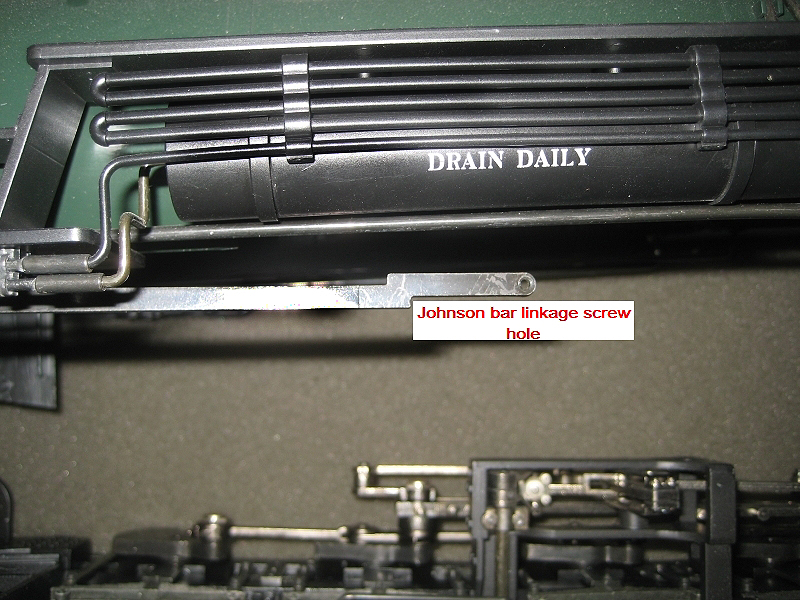 This is the parts that move if you reach inside the cab, lift up on that big lever where the engineers right hand is, and you can move the lever forward and back. the lever extends through the cab floor. follow the moving part forward along the right side of the loco to about the middle of the loco. There, you will find a tiny screw loosely attaching it to a lever that moves some of the valve mechanism. That's the screw.

Next, remove the two screws underneath the cab at the rear of the loco.  The picture below shows where these screws were (after the boiler is removed) 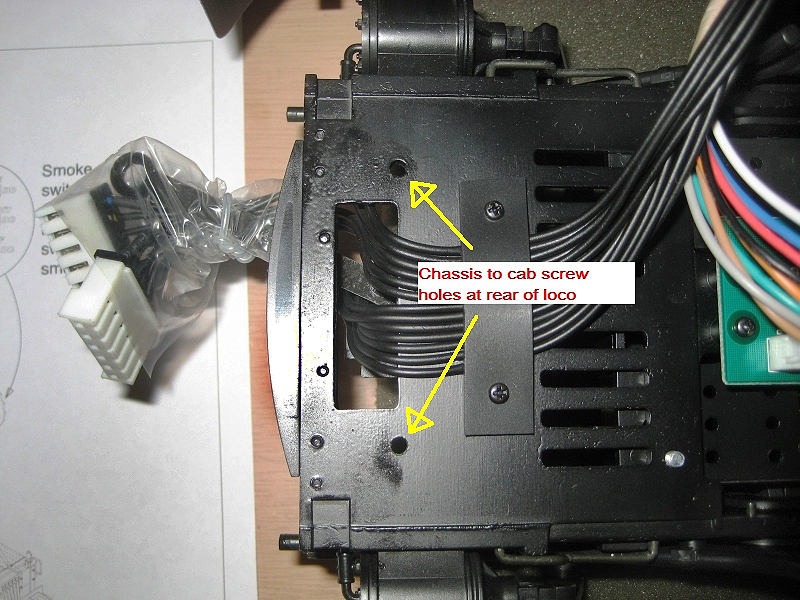 Then, twist and pull the sand dome off the top and remove the single screw under it.  The picture below shows where the screw went: 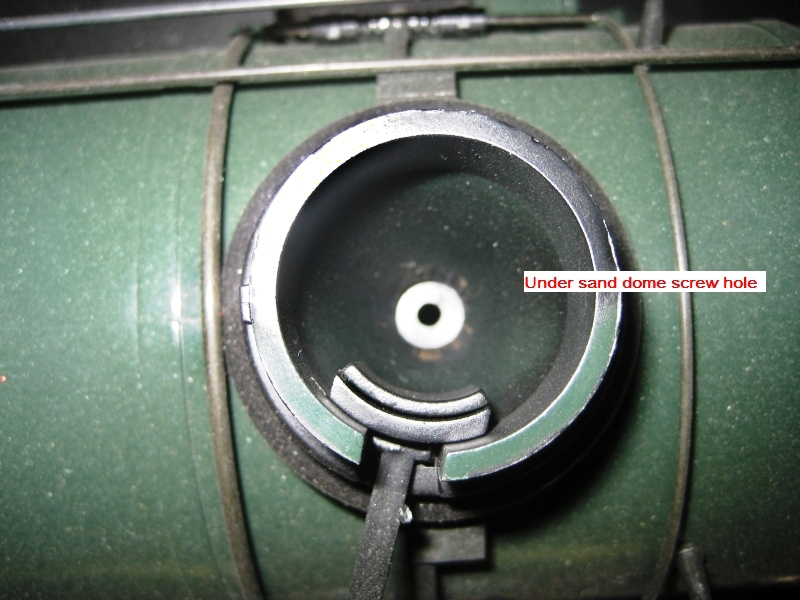 At this point you might want to pull the smokebox front off so that you can see what you're trying to accomplish.

You can remove the front of the smoke box, not just the door on the smoke box front, but the entire plate the door hinges on. Look inside and notice that there is a LARGE LIP on the cross-head then protrudes forward and holds the smoke box down.

Now to get the boiler off the chassis, lift the rear of the cab up until the steam tubes are clear of the running board at the front.  This will be about 20 degrees, then slide the cab and boiler forward to disengage the LARGE LIP from the inside of the smoke box rear.

The picture below show the lip you worked so hard to disengage. 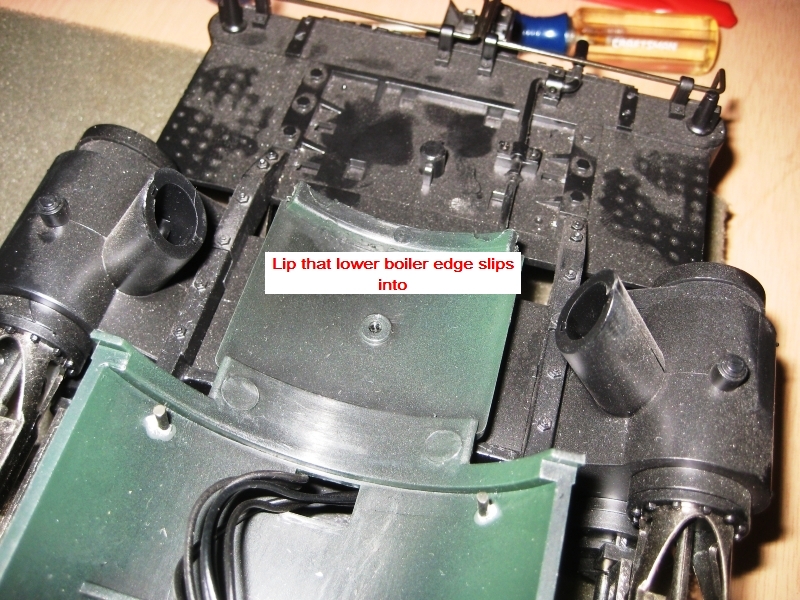 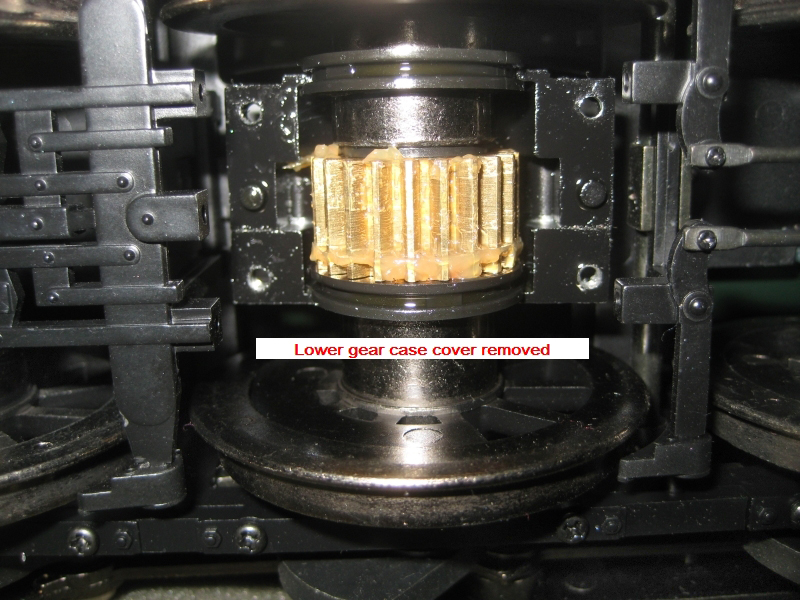 Then, on top of the chassis, remove the two screws and straps that hold the gearbox down and the motor down.  At this point, the whole motor and gearbox is loose.  Lift up on the motor/gear box, and with the large #2 Phillips, unscrew the two screws connecting the gearbox to the motor.  You can then just pull the motor out of the gear box.  Then clip the motor leads. Mike had to cut some tape with the knife to do that.

When reassembling, the hardest part is getting the large lip engaged up and over the bottom rear edge of the smoke box. While you don't need to remove the smoke box front to take the loco apart, you will need to remove it to put it back together. It is recommended that you remove the front and look at the large lip prior to removing the boiler, just so you will know what you need to accomplish when putting the loco back together. Another tip is to put a small radius on the lower part of the lip with a file, helps get the boiler started onto the lip.

Believe it or not, It only takes a minute or two to remove or install the boiler.

From a number of posts on forums: