There is a lout beep/bong whne in reverse. On the 2020, the level of the beeping when backing up is really loud, like 85 dB.

It is in a speaker behind the front nose trim, where you cannot see it.

The goal is to stifle the backup warning noise, either mute it, or have a variable volume.

When my car was new, most of the documentation was on the 2019. In this model, the speaker in the grill is just a speaker, and there was the CAN bus component and audio amplifier behind/above the glove box.

So I pull the dash apart and take out the glove box, and the unit is not there.

I found someone that had investigate how this works, and funny enough he is a large scale train guy also: Eric Reuter, he has a Hyundai Kona. While the CAN bus unit/speaker may be the same, the wiring is different in the Kia.

He did have some fun though, he sniffed the CAN bus and found the commands being sent.

well, fun but no help to disable.

I investigated the wiring by inspection, I did not have the schematic. Different countries have different switch panels, and of course mine has a blank switch. I tried to follow the contacts back from the blank switch, but they went to an empty position on the connector to the switch panel.

I got the schematic on the Kona, so pretty sure the wires were there somewhere: 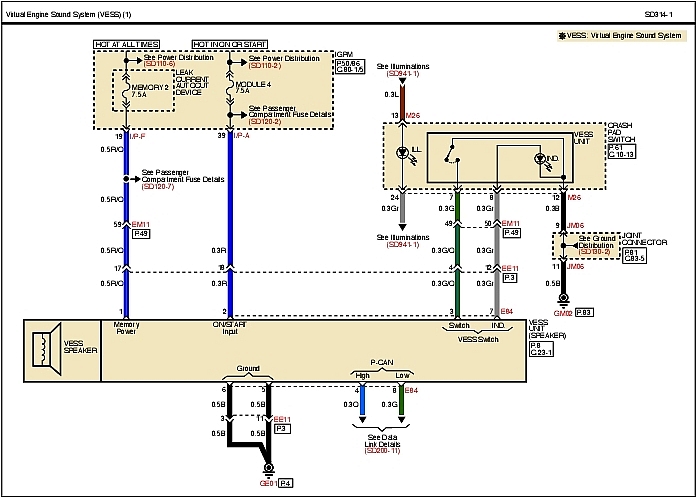 Finally someone got the schematic, and traced the VESS defeat wire down to the connector:

blue wire with a black stripe on the rear connector, pin 7, ground is black on pin 24. Ground the wire and the VESS system is defeated until toggled again or car restarted.

The VESS (Virtual Engine Sound System) in my 2020 Kia is LOUD!, worse the backup beeps emanate from the VESS speaker behind the front grill, so apparently it is way louder so the speaker in the front can be head from the rear.

Kias in some other countries have a switch to defeat the system.

The Blue/black wire is on pin 9 of the connector. Ground is a black wire on pin 24