Sometime ago I retrofitting several Aristo-Craft Turnout Motor assemblies to the manual operated Wide Radius and #6 turnouts in my under house layout.

I had discovered problems that arose for some of those installations.

The Aristo electric turnout motor assemblies are externally identical to their manual versions.
In fact, internally, the manual ones are just devoid of the motor with its gear, throw bar electrical contactors, and circuit board.
Thus, the electric assemblies can be manually operated just like the manual ones. (I use both.)
However, when you actuate that manual lever on top of the case cover you will notice the extra effort imposed because of moving the internal gears.

The Aristo turnout motor assemblies operate on DC at their terminal connections. I made my own + and - DC capacitive discharge power supply in conjunction with SPDT micro switches (spring loaded - center off) to operate them.

A motor assembly itself includes not only the motor but a plastic throw bar with two separate areas of spring loaded metal contactors that in conjunction with circuit board pads serve to function as two ganged but electrically separate SPDT switches.

One of these throw bar switches is for the purpose of selecting an internal diode of applicable polarity with respect to the motor, and the other switch is an auxiliary accessory switch of obvious low current capability for use by a user. (In my case, I chose to use the aux. switch in a circuit for illuminating a green or red LED as an indicator of the turnout's directional state at a remote location.)

When the turnout motor is actuated by applying an appropriate DC voltage polarity to it through one of the said internal diodes it is caused to rotate, turning a gear train -etc., which results in the described throw bar switch assembly to slide to the opposite direction. When this happens, the other internal diode of opposite polarity is switched in place of the first diode with the purpose blocking the effect of a continuously applied voltage. (In other words, the motor is no longer energized once the throw bar switch assembly is thrown even if voltage is still applied to it. This is essentially a limit switch for preventing turnout motor over run.)
Now, if the opposite polarity of an appropriate DC voltage is applied to the motor assembly, the same thing happens as described above, except of course, the throw bar switch assembly is thrown back to its original position.

Physically, the switch throw bar within the turnout motor assembly is built with small metal "U" shape contactors that are intended to slide against and contact appropriate foil pads on the circuit board.


At this time, I would like to point out that George Schreyer's has an excellent write up on "Turnout Motor Controls" for a description thereof at the following link: http://www.girr.org/girr/tips/tips2/aristo_turnout_tips.html#controls


Note that George refers to both Aristo and another brand SWITCH BOX that run on AC input power for control of the turnout motor. These boxes convert AC to DC since the Aristo turnout motor assembly operates on DC voltage.
(If an AC voltage is applied directly across the Aristo turnout motor terminals, the motor will oscillate - attempting to switch back and forth at a speed related to the AC frequency! Not a good thing to do.)

George shows 2 alternative schematic diagrams making use of one's own switches in combination with a diode / diodes in place of an Aristo or other brand switch box.

What I have done is to build my own + 24 vdc and -24 vdc DC power supplies, and I use an (On) OFF (On) momentary contact micro switch wired to select and route those + or - voltage sources utilizing large discharging capacitors to one of the turnout motor terminals. The other terminal is a common return.

To reiterate, the way the Aristo turnout motor works is you supply a positive or negative (as required) voltage across its motor terminals to actuate the motor. The motor then having reached its excursion stops and is ready for the opposite polarity voltage to be applied to actuate it in the opposite direction.
(As previously described, internal to the turnout motor assembly is a diode and switch contactor in a circuit that allows the motor to operate this way.)

Note that the diode/s shown in George's drawings are NOT what is in the Aristo turnout motor assembly, but are what is used for one's own SWITCH BOX control.


Now for a few problems I came across:

I have discovered that the switch assembly throw bar contactors - in some cases - do not make physical contact to the circuit board pads. This results in a malfunctioning turnout motor assembly.
For example, if the contactors dedicated to the motor’s polarity diodes were to fail to complete the intended circuit, the motor would continue to run even after the throw bar would have reached its desired position – causing a grinding sound of gears  – albeit when voltage is still applied.
(It should be appreciated that another cause of the contactors not completing their intended circuits may be a physical reason preventing the throw from reaching its desired end stop position. This can include throw bar binding against the case cover slot.)

I have found the little metal contactors- which are shaped like a flat bottom "U" - to be too flush with the surface of the plastic throw bar pockets that they are housed in - thereby not making adequate contact with the circuit board pads. Under each of the little "U" contactors is a tiny coil spring that exerts a very light pressure to the contactors. I have found some of these little springs had been turned on their sides and thus electrical contact continuity fails to work reliably.

Moreover, sometimes the little springs appeared to be too short in length.
I was able to resolve this problem by using the tiny springs from an old HO scale freight truck side frame by installing one of these springs in place of each of Aristo's original throw bar springs.
(These HO truck springs are smaller in diameter, but taller than the original Aristo throw bar coil springs.)
This seems to make the contacts work very well.

I found a few Aristo turnout motor assemblies with the little pinion motor gear positioned too far from the motor shaft. All you have to do is push the gear with an object like a small flat blade screw driver to re-position it on the motor shaft so it meshes correctly with the larger gear.
Also, when fastening the upper housing cover, if it is not tight enough - or too tight - can cause gear mesh problems. This can be affected by how tight the fastening screws are.

Two possible springs are employed - a 3 wrap or a 4 wrap coil mid section.
Only one is used. I used the 4 wrap type spring.
Sometimes I have found this spring installed in directions different between various turnout motor assemblies, but I have not found a definitive spring installation orientation that makes for consistent results for every turnout motor assembly.
(The bag that comes with Aristo's Turnout Motor product includes the lantern and spare springs of the 3 wrap type.)


BTW, Having taken apart and worked on many of Aristo's turnout motor assemblies, one thing I have learned is that any one improvement or "fix" will not assure it will resolve operational problems on the next assembly you work on. It seems you always learn something else to address to make them work properly. 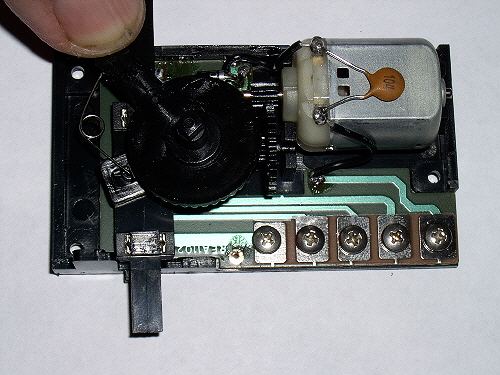 Note the two possible springs employed - a 3 wrap or a 4 wrap coil mid section. Only one is used. 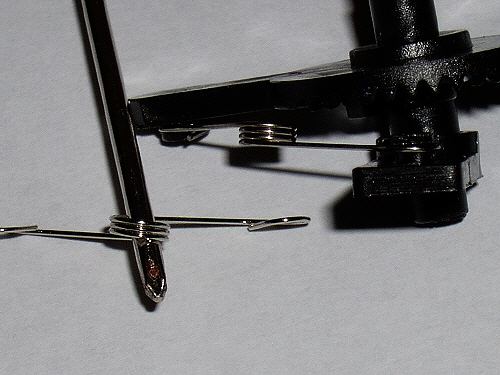 This is the motor assembly with gear & spring subassembly removed, but shows the throw bar in is normal contactor down position against the circuit board pads: The contactors slide across the circuit board trace pads and serve to electrically bridge selected pad pairs, thereby completing an intended circuit path.
One contactor (in concert with a diode) serves as the limit switch for the motor - preventing it from overrunning once the points are thrown whilst at the same time requiring an opposite polarity DC voltage to be applied to activate the motor for throwing the points back in the other direction.
The other contactor is the auxiliary SPDT accessory switch (I use this for controlling LED status indicators for turnout directional status.):

I found that beveling the sharp edges along the throw bar helps for it to slide in the slots of the cover pocket: 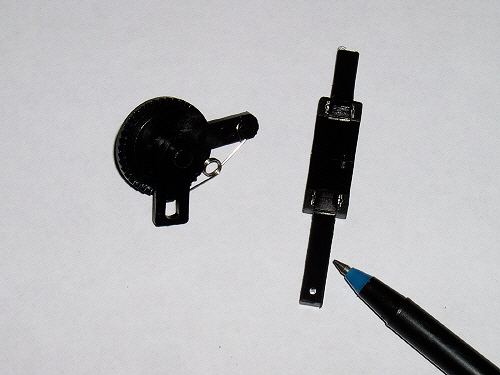 Turnout motor assembly cover installed with small screwdriver through hole to secure gear & spring subassembly from popping out during assembly: 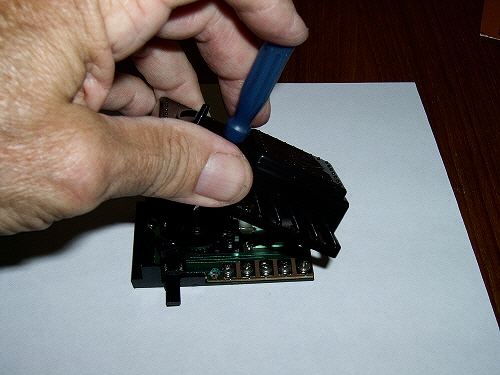 Once the cover is almost all the way on, you can use your thumb to push the projecting throw bar to the left so the cover slot will go over it: 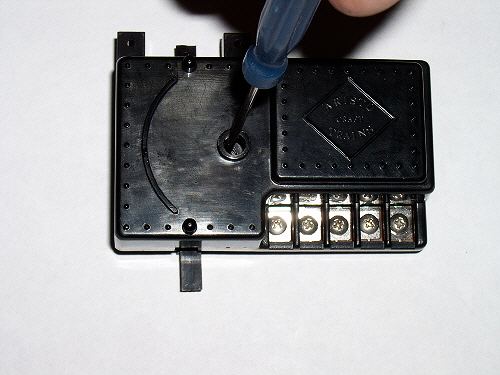 Another thing I have tried is to install two turnout motor assemblies on the same turnout by placing them on opposite sides of the points.
Of course you must wire the motor terminals reversed on one of the assemblies so both will work in concert in a push - pull fashion.
In my case, I did this to make a more trustworthy aux. switch operation on one of my #6 turnouts - more than for the purpose of providing more force for moving the points - a bonus feature. 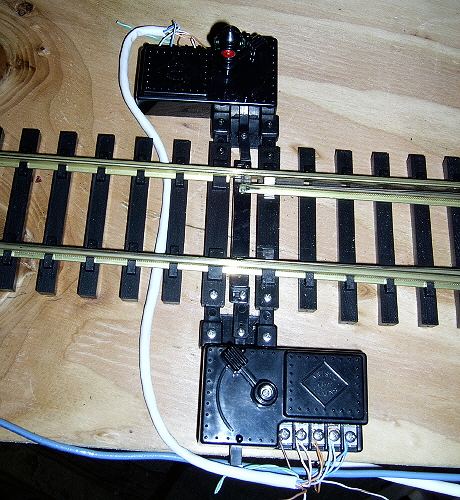 Outside view of an Aristo-Craft turnout motor assembly pair installed in push - pull fashion on a # 6 turnout: 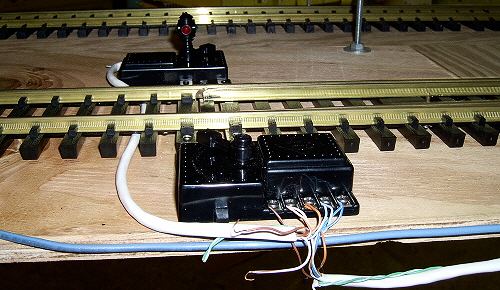 Inside view of an Aristo-Craft turnout motor assembly pair installed in push - pull fashion on a # 6 turnout:

Sometimes a different length attaching link to a turnout is helpful for proper operation of the points at both positions. Here are some pictures of that same #6 turnout that required a custom made, slightly longer throw bar link before I added the push – pull second turnout motor: 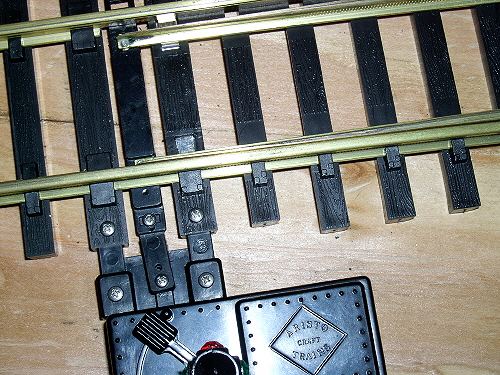 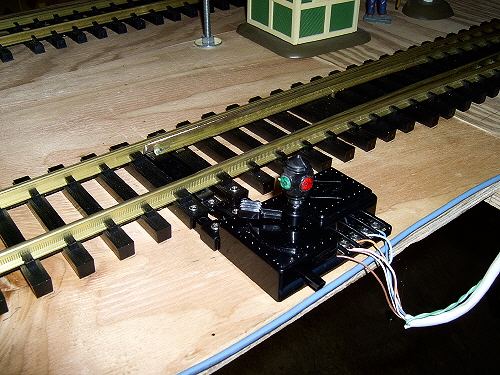 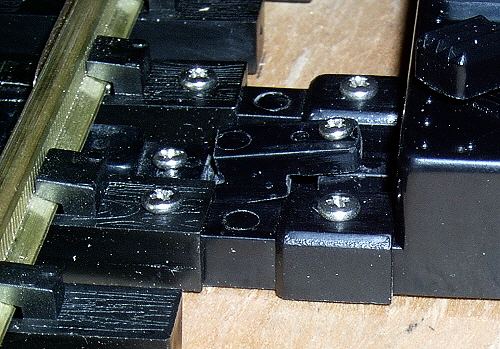 Shown below is my turnout motors' control panel with LED point status indicators and momentary contact - center off - micro switches [SPDT (on) off (on)]. This is used to control Aristo Turnout motor assemblies. Illuminated Green LED = points in straight path; Red = diverging path.

In the event the Aristo turnout motor assembly throw bar motor overrun contactors fail to  connect and stop the motor, the spring loaded micro switches - in conjunction with the discharging power supply capacitors as previously described – serve as a fail safe to protect the motors.