The Aristo-Craft hopper car is a good looking product that replicates a 34 foot "2-Bay Offset-side Hopper Car" that was introduced by Aristo in year 2008.

The car's scripting indicates "CAPY 100000", hence 50 tons.
The car is fairly short and seems in keeping with what appeared to be the then Aristo business model that favored lighter weight, smaller locos and smaller size rolling stock (albeit still 1/29 scale) having plastic wheels that are easy to handle and with lower costs - perhaps with the intent of attracting new folks to the market requiring less costly, smaller layouts that are workable with tighter track curves. (Fast forward, Aristo-Craft is no longer in business.)

That said, this car type is appealing to have in any size layout, and the expectation would be to acquire many of these cars to emulate a unit coal train.

(Comment: My core railroad of interest is Southern Pacific (SP), and I could not find this car type prototypical for SP, but I did get the 2008 club cars that were offered in two road names - one new GM&O car with plastic wheels in 2008. Then much later in 2019 at a swap meet, I obtained two used Interstate cars in like new condition already fitted with metal wheels.
At this point I realized I had not described this car type other than on an MLS forum in late 2008; hence, this "vignette" includes information & pictures (albeit slightly improved) from that described on MLS along with added material concerning body mounting Kadee centerset couplers and some experimentation done with different trucks and coupler boxes.)

The GM&O car was upgraded with metal wheels, and it along with the Interstate cars were fitted with body mount Kadee 906 couplers.

Aristo's 2 bay hopper is the smallest of the various 1/29 scale hopper car offerings.
(Note: It's to be appreciated that other hopper or ore cars do exist from what is shown in the examples to follow but were not considered because their scale could not be verified as 1/29.) 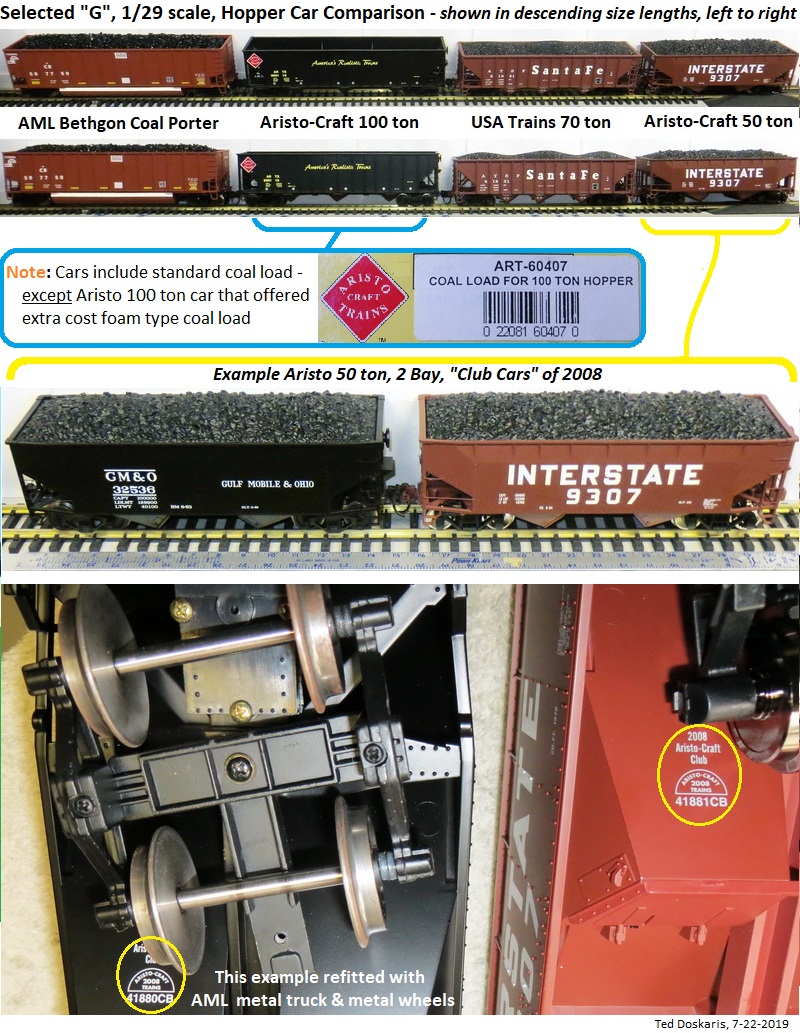 To be illustrated is the Aristo 2008 GM&O 50 ton 2 bay hopper car packaging
with example, Art-41880CB-3, GM&O club car in road number 32536.
(The used Interstate cars I obtained were not provided with any packaging.) 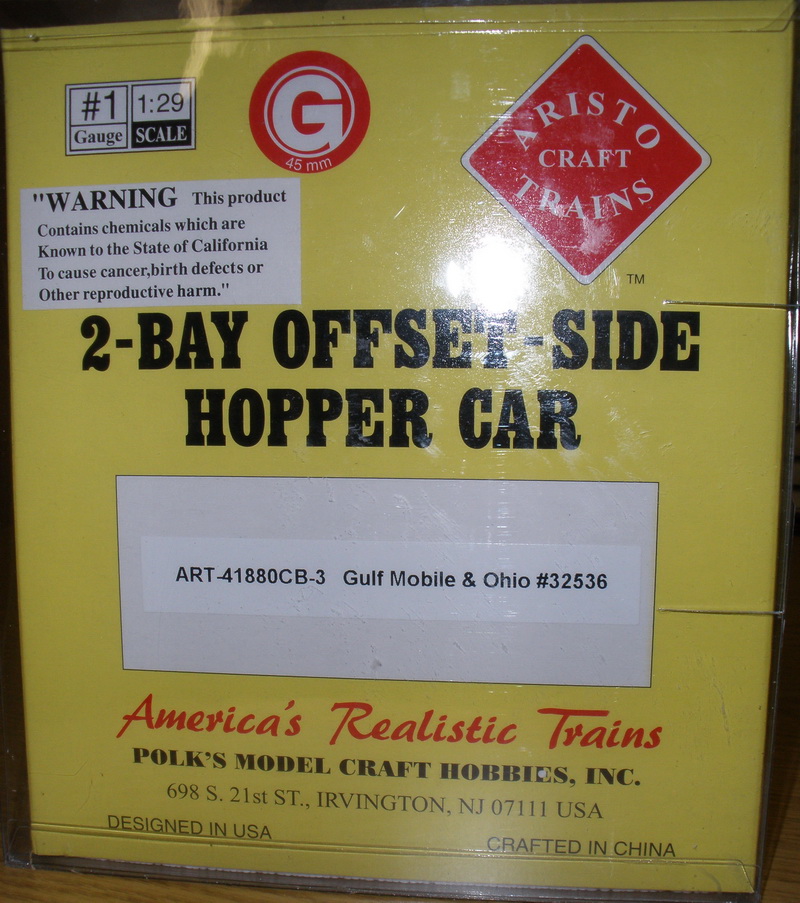 The car is now packaged in a clear plastic box having a telescopic lid rather than plastic end flaps previously used.

This is a welcome change since the adoption of the clear plastic box having end flaps of the example 40 ft box car box on the far right side of the picture shown below.
Caution: Care must be used, particularly when trying to reinstall a car back in a plastic box, more so if it has end flaps, because you're prone to cut yourself on the sharp plastic edges! 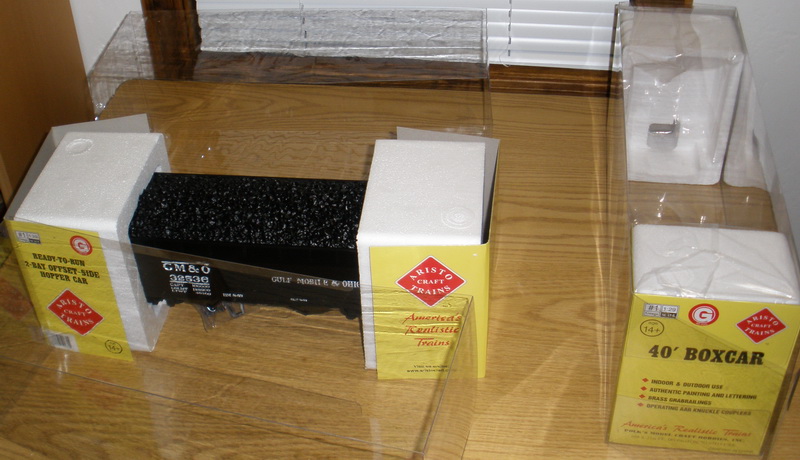 As intended the clear plastic box was meant for presenting an attractive display of product but had been somewhat controversial as it is unfriendly to reuse for those of us that like to periodically put away rolling stock back in the box. The telescopic box lid helps in this regard.
As standard equipment, the 50 ton 2 bay car includes a simulated coal load made of plastic in the form of a panel that fits into the top of the car. (Comparatively, Aristo's 100 ton open hopper car does not include this feature, but a simulated coal load for it made of black painted Styrofoam was offered separately at extra cost, PN ART-60407.)

The coal load can be better seen as shown below.

Shown below is a closer view of the brake apparatus detail: 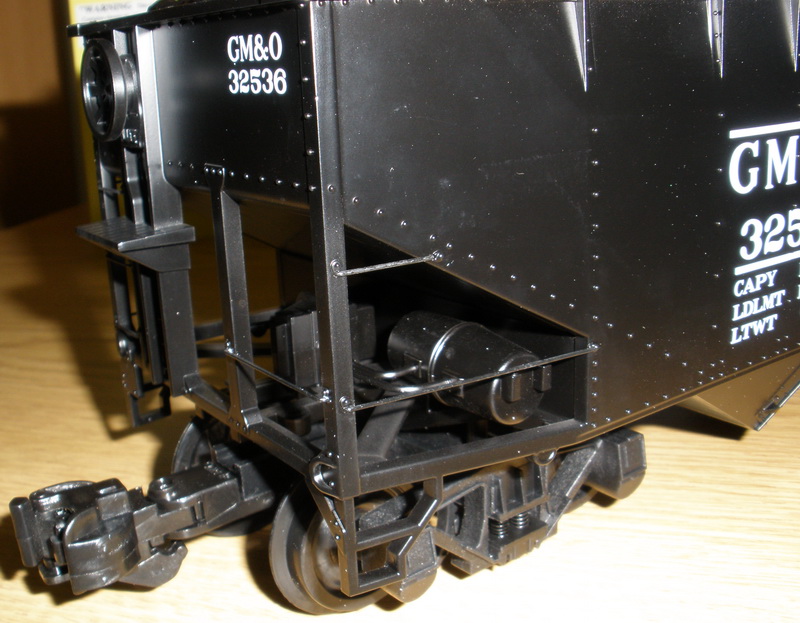 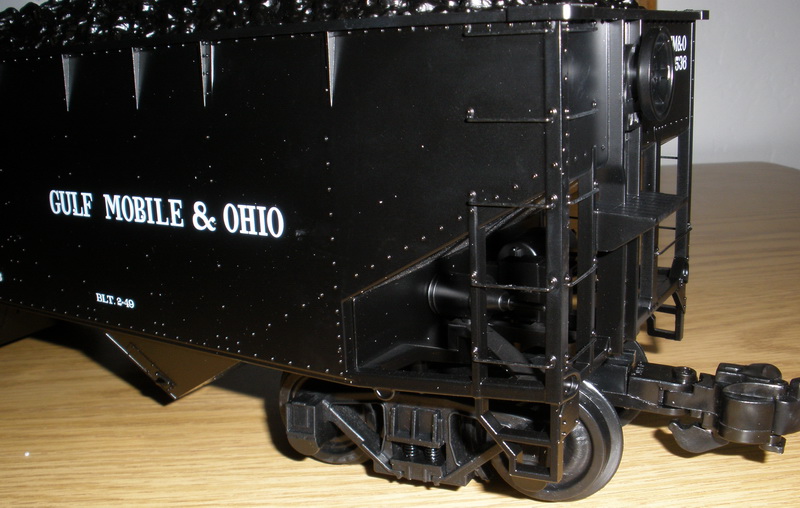 One nice change from other similar era Aristo 40 foot type freight cars is the use of a brake wheel having a round periphery. 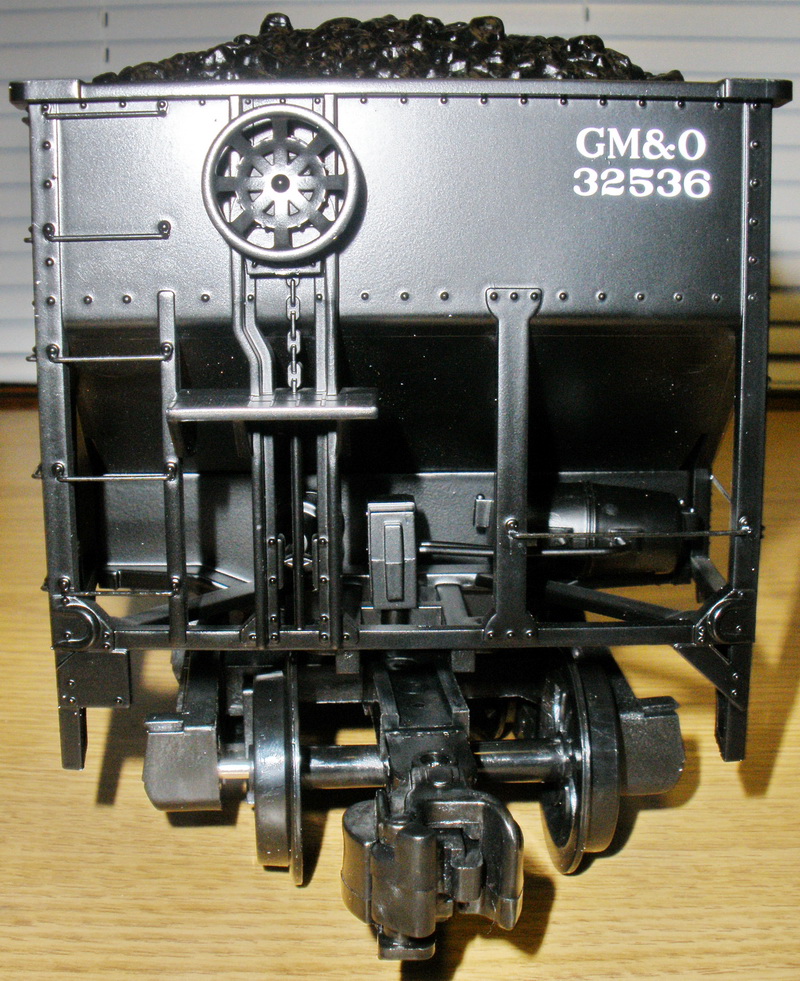 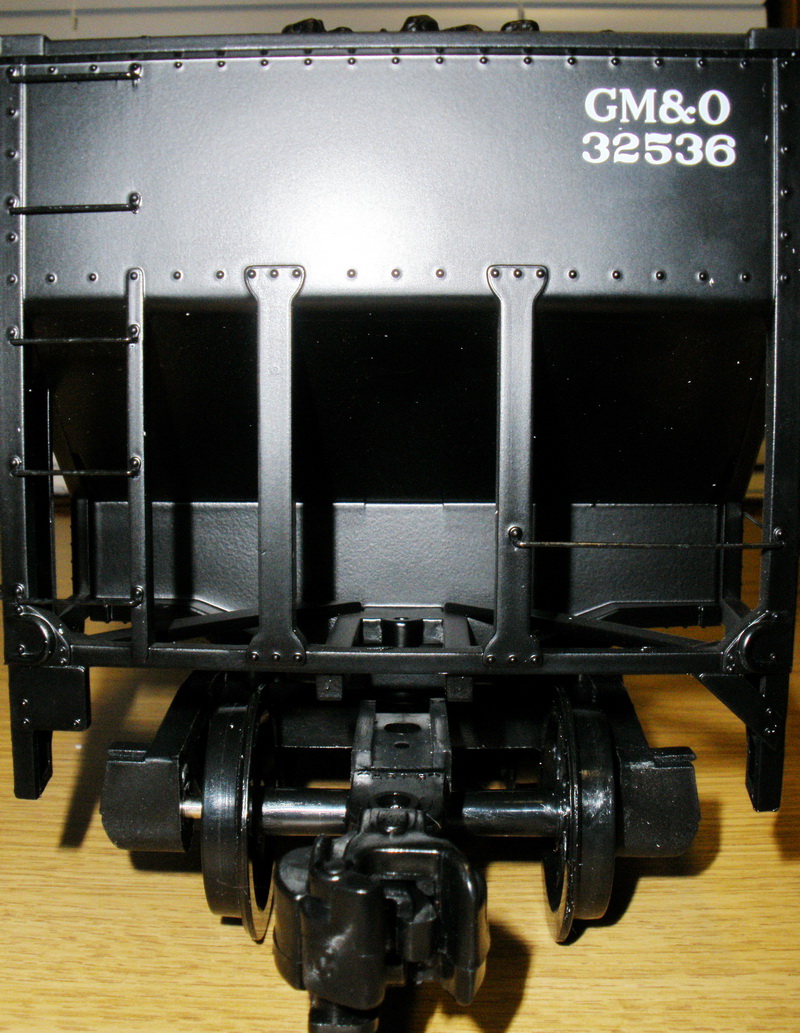 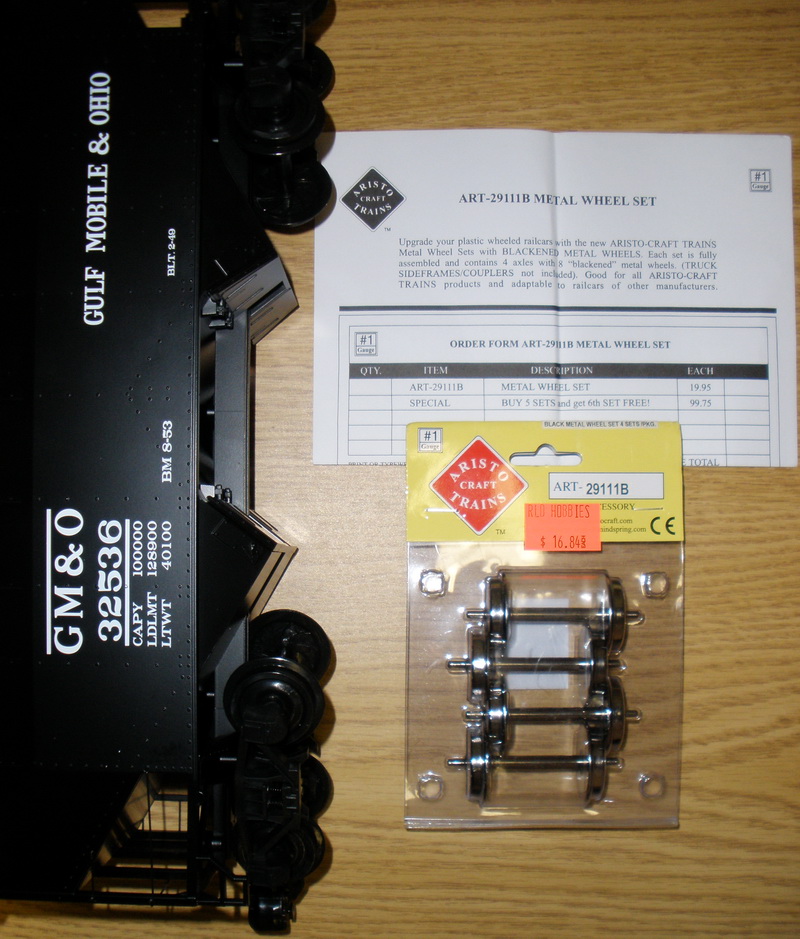 Shown below the trucks are removed in preparation for fitting Aristo's ART-29111B metal wheels.

Unlike the more recent Aristo cars of that era that had a nice factory applied blue / green colored paste type lubricant for the truck axle tips / journal boxes, this car was bone dry of any lube - another lost art with Aristo's factory move around that time. 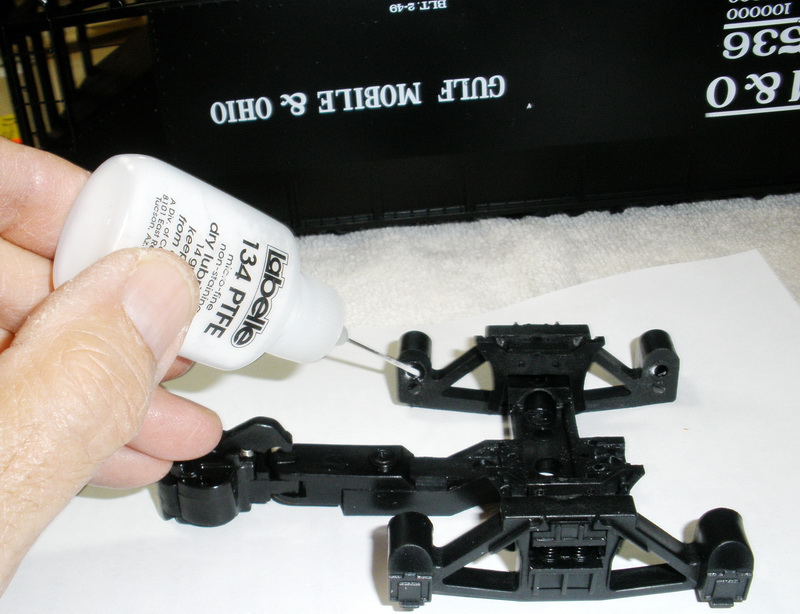 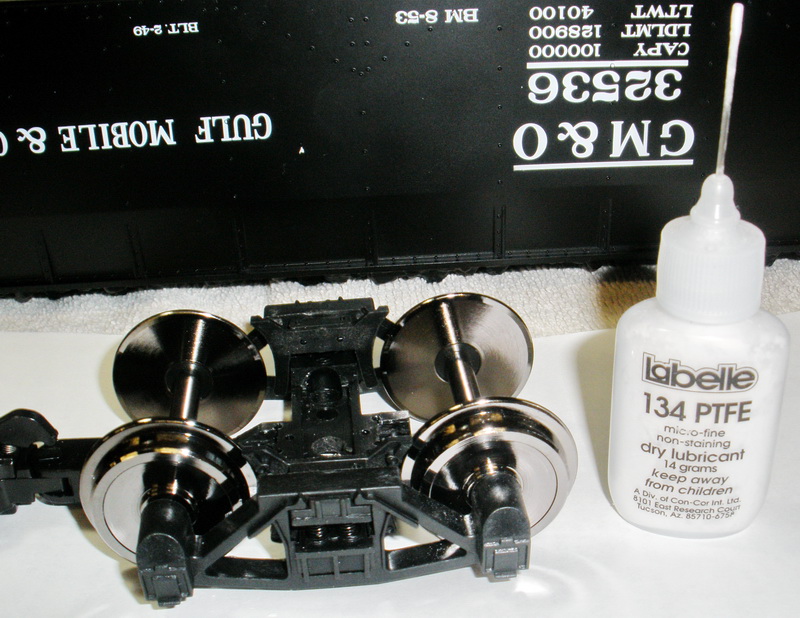 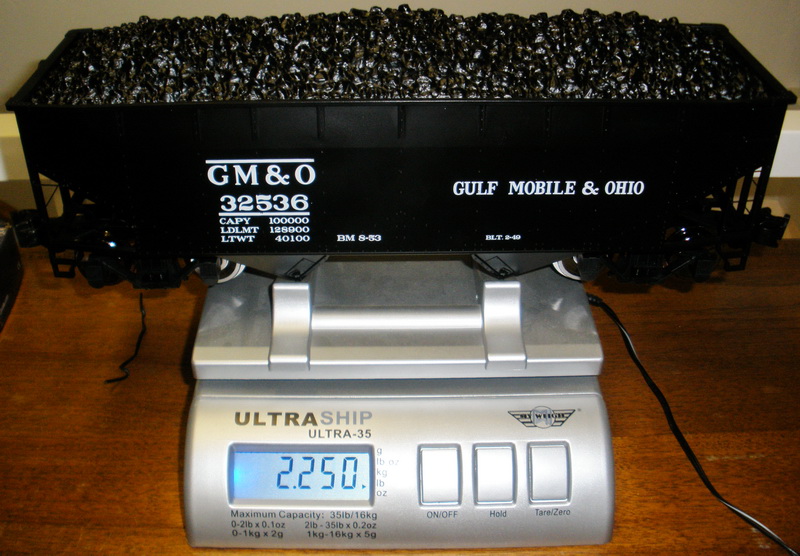 As shown, the Aristo 50 ton 2 bay hopper car is a good looking product.
It is fairly short and seems in keeping with what appeared to be the then Aristo business model that favored lighter weight, smaller locos and smaller size rolling stock (albeit still 1/29 scale) having plastic wheels that are easy to handle and with lower costs - perhaps with the intent of attracting new folks to the market requiring less costly, smaller layouts that are workable with tighter track curves.

That said, this car type is appealing to have in any size layout, and the expectation would be to acquire many of these cars to emulate a unit coal train.

My core railroad of interest is Southern Pacific (SP), and I could not find this car type prototypical for SP, but I did get the 2008 club cars - one GM&O and two Interstates.

Measurements were made of the car and its coupler mounting pad as follows:

The overall body length (not including the couplers) measured 13 and 11/16 inches. (When scaled up this would be 33 feet, whereas, the car as described in Aristo's manual is like a 34 foot prototype. This small difference could be explained by where the measurement is made.) 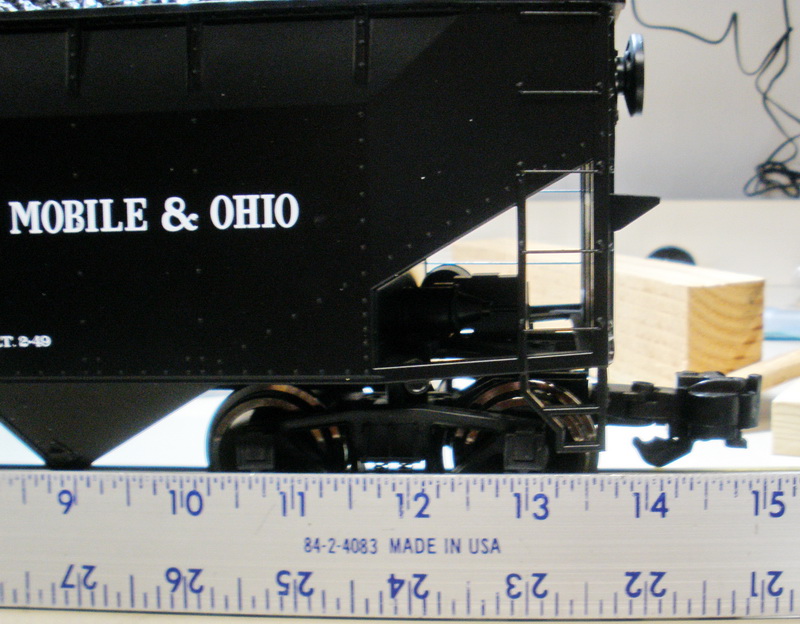 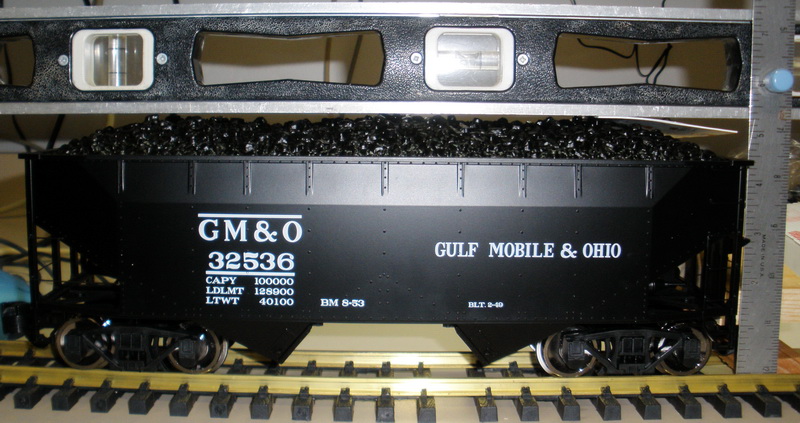 Since the 50 ton, 2 bay, hopper car was a late Aristo product, they thankfully designed in underbody mounting pads to accommodate Kadee 830/906 coupler boxes.

The coupler pad measured about 0.940 inch across the two holes. 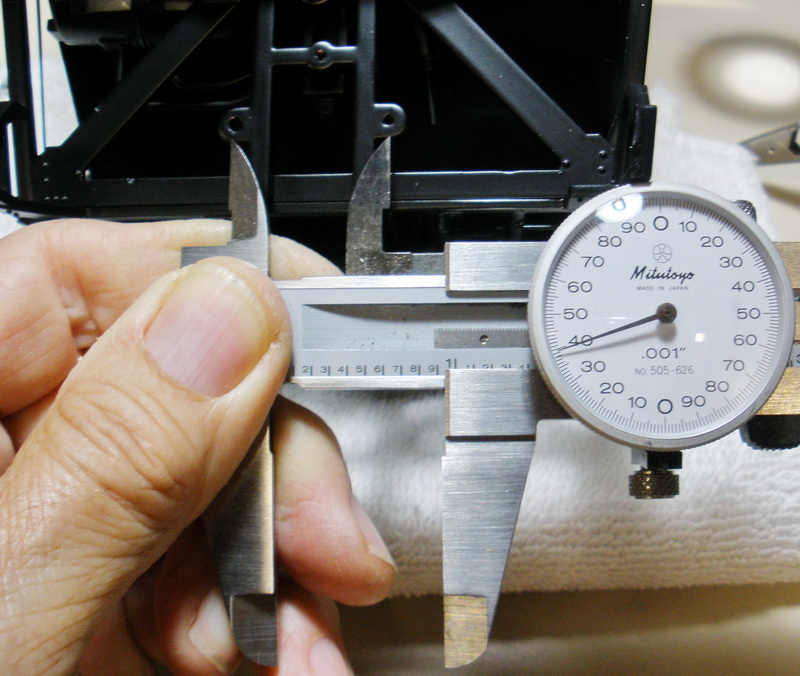 The car mounting pads are intentionally meant for body mounting the Kadee kit 830 or the 906 kit having more modern AAR type E couplers.

The example that follows employs the Kadee 906R (rust color) kit for installation on an Interstate car. 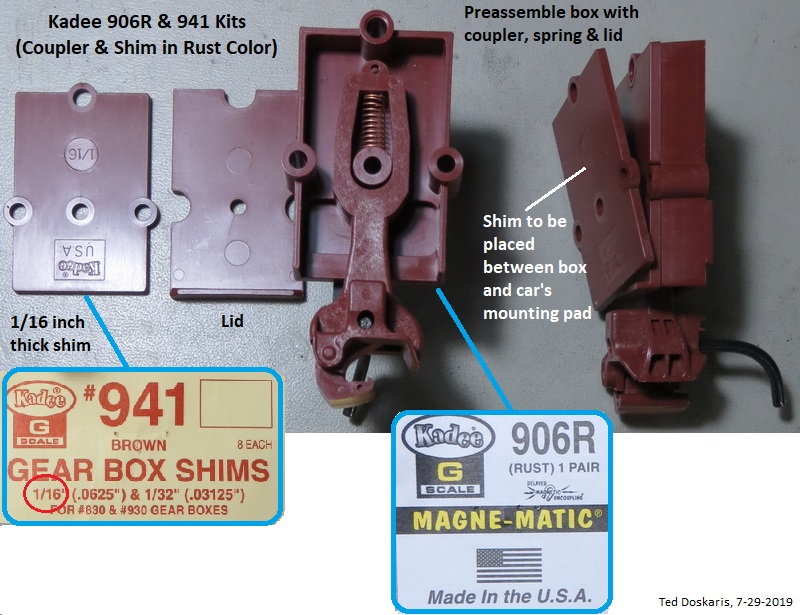 The Aristo 50 ton 2 bay hopper car mounting pad for the coupler box includes holes that are too big for using #2 or #3 screws to fasten the box. Consequently, relatively large more conspicuous #4 screws from the Kadee kit are used. The kit includes long and short length self threading screws with pointed ends. The shorter screws are used. If needing to make use of the longer screws they can be cut short using a side cutter, and the resultant blunt ends can be finished with a file or grinder. The shorter screws can have their pointed tips similarly cut off for better appearance. 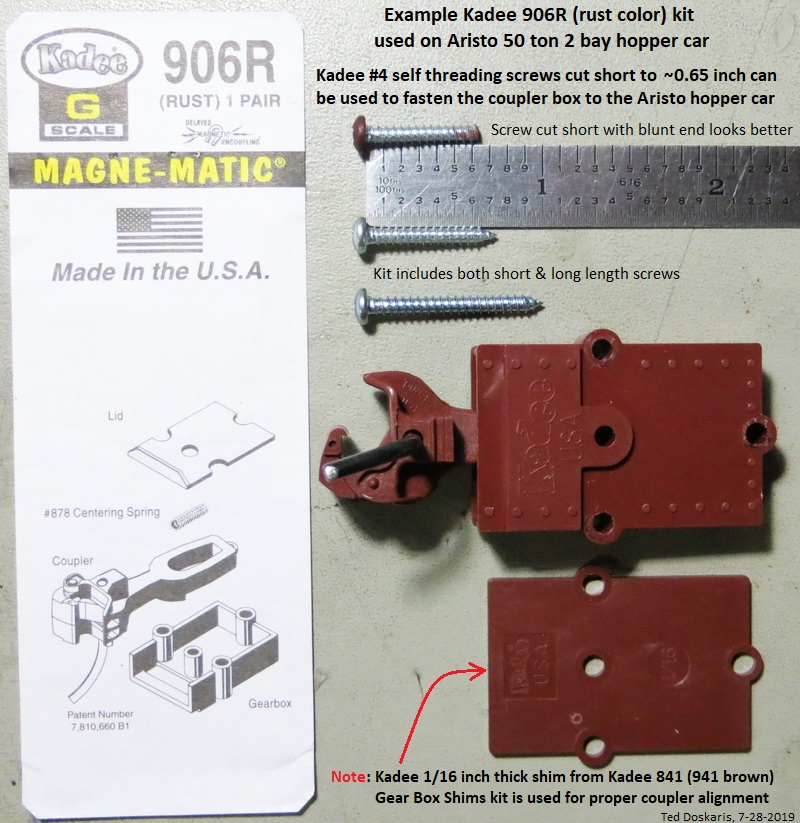 Trucks are to be removed from the car and their coupler tangs are to be cut off.  Also, the relatively large #4 screw heads can be painted to match the car's livery so they would be less noticeable - illustrated below. 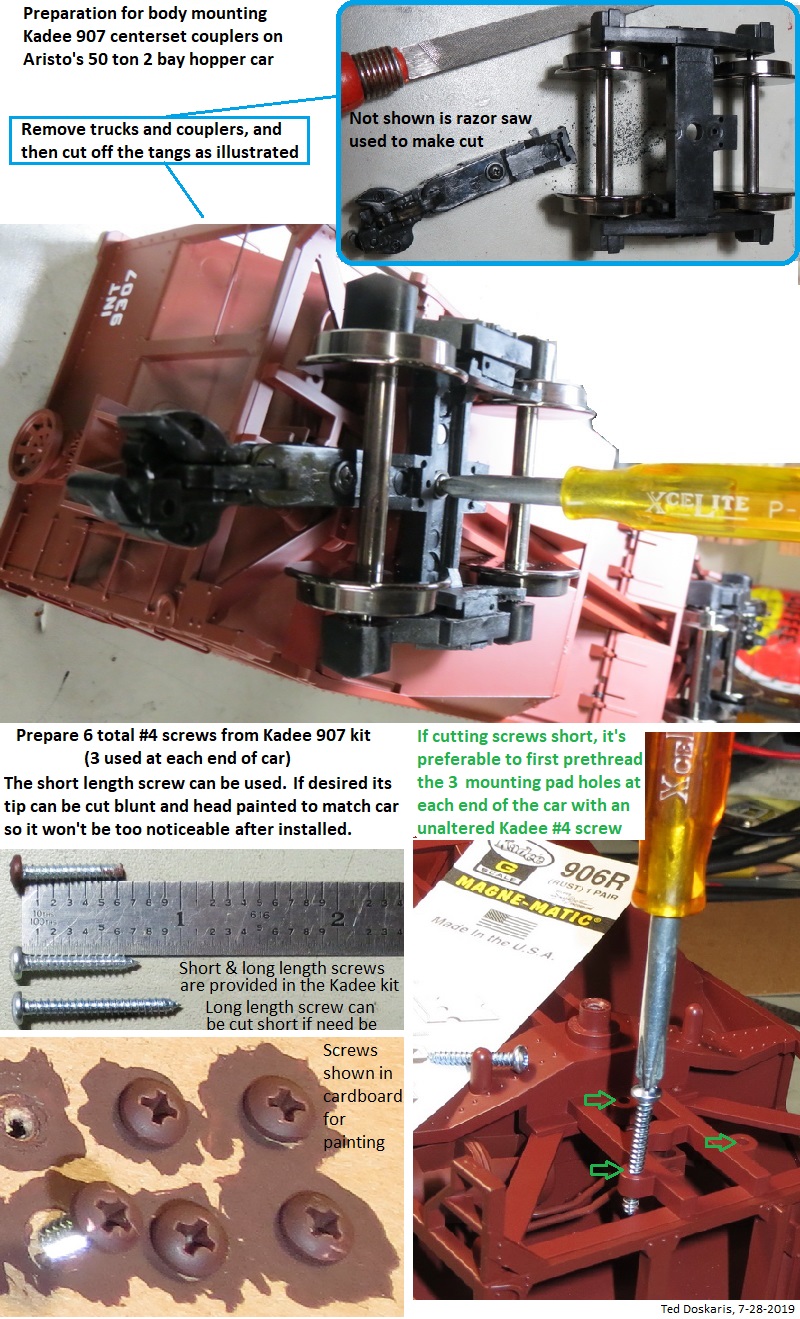 The installation process of the Kadee coupler box assembly is illustrated below. 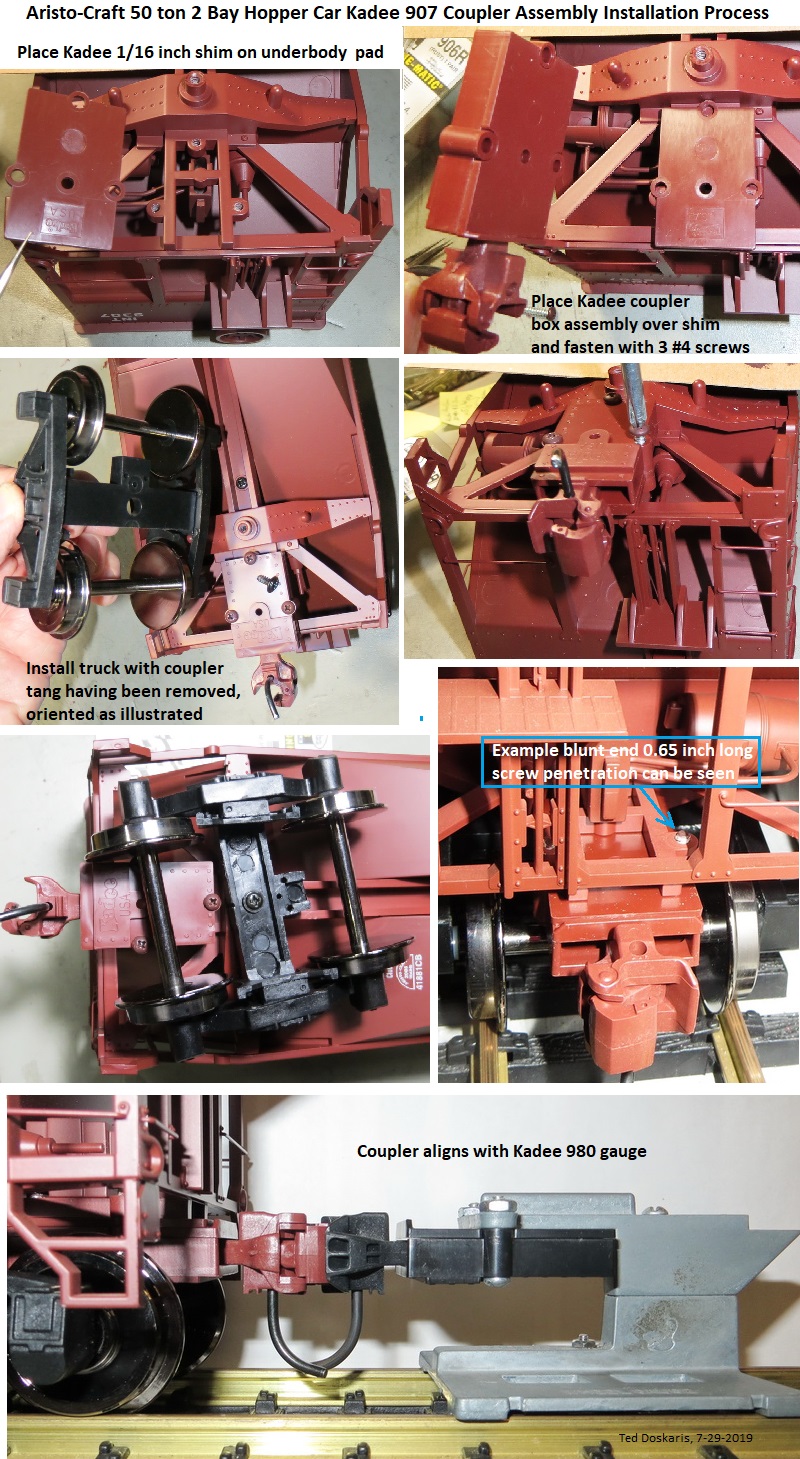 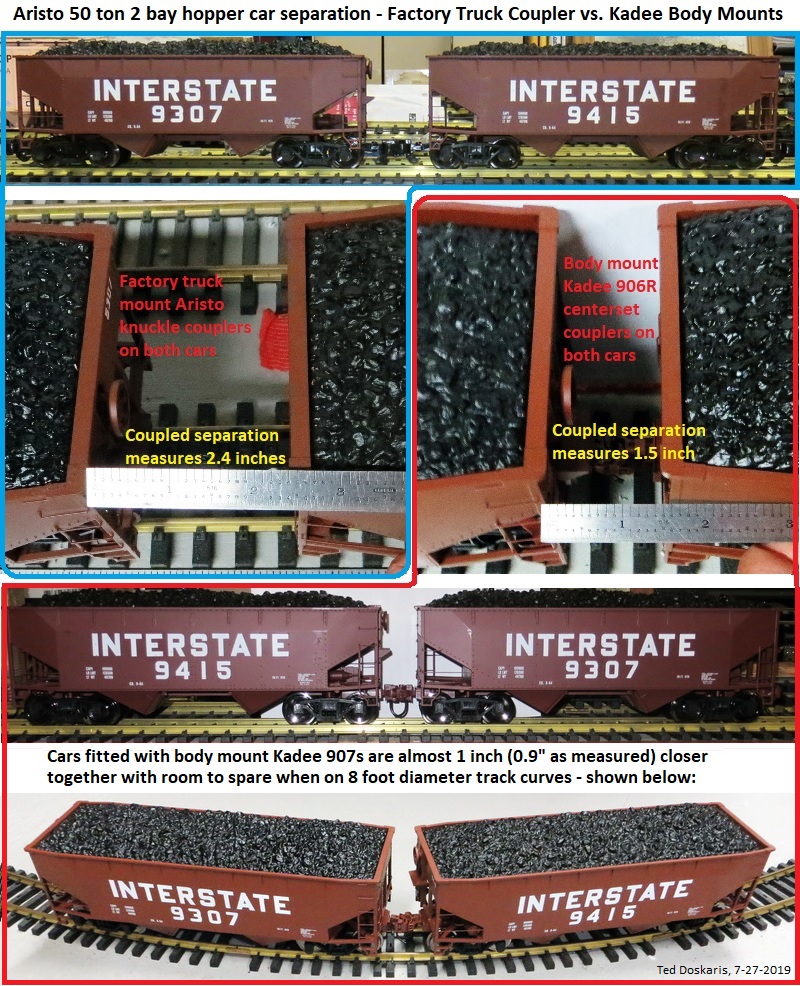 When working on American Main Line (AML) brand products, I noticed the similarity of their optionally supplied coupler boxes with respect to Kadee 830/906 boxes. In this regard, I tried using individual Kadee 900 couplers (that can be purchased by itself - no box, etc. parts) in AML coupler boxes.

The GM&O car now with those changes is shown below:

The alterations need to adapt the AML coupler box to accept a Kadee 900 coupler is illustrated below.

Compared to the Aristo-Craft Bettendorf plastic trucks that come with the car, the AML truck is somewhat smaller and would seem to be more appropriate for a "50 ton" car.  Also, AML trucks are all metal and have standard metal wheels.

An example AML B&M 40 foot box car comes with the smaller 50 ton type trucks, but given some research, this particular car was prototypical with Barber roller bearing trucks, so the trucks on this car were replaced with Kadee roller bearing trucks that freed up its Bettendorf trucks for use on the GM&O hopper car. 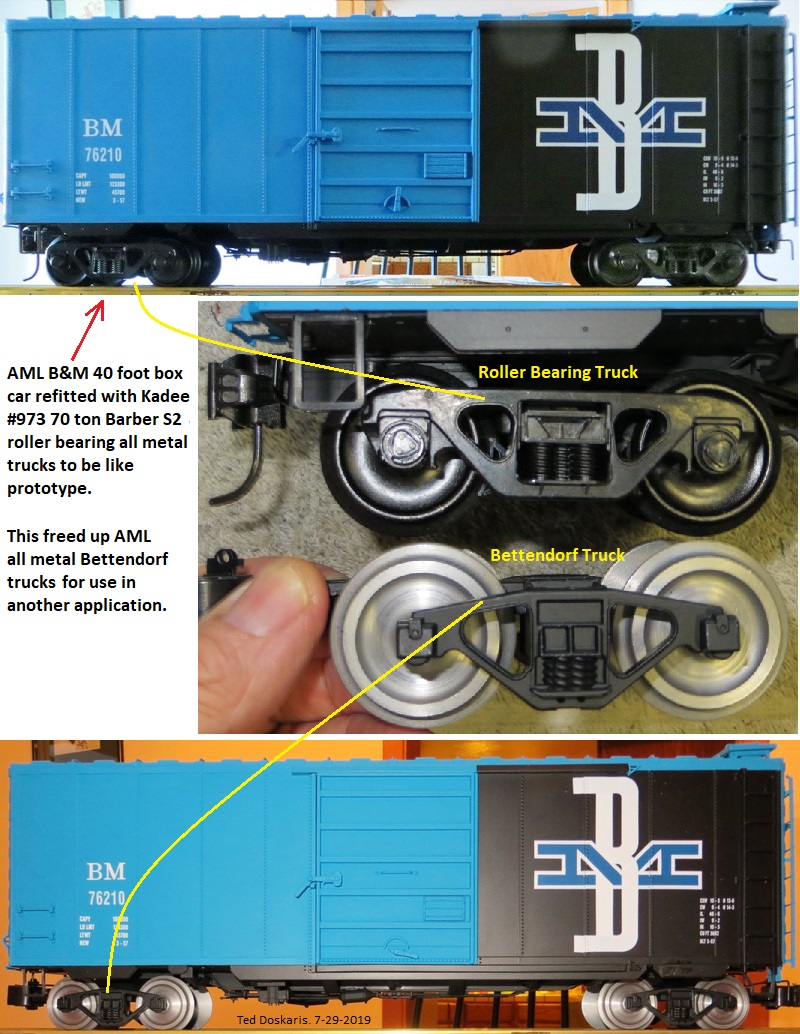 Illustrated below is the GM&O car equipped with the AML 50 ton trucks. 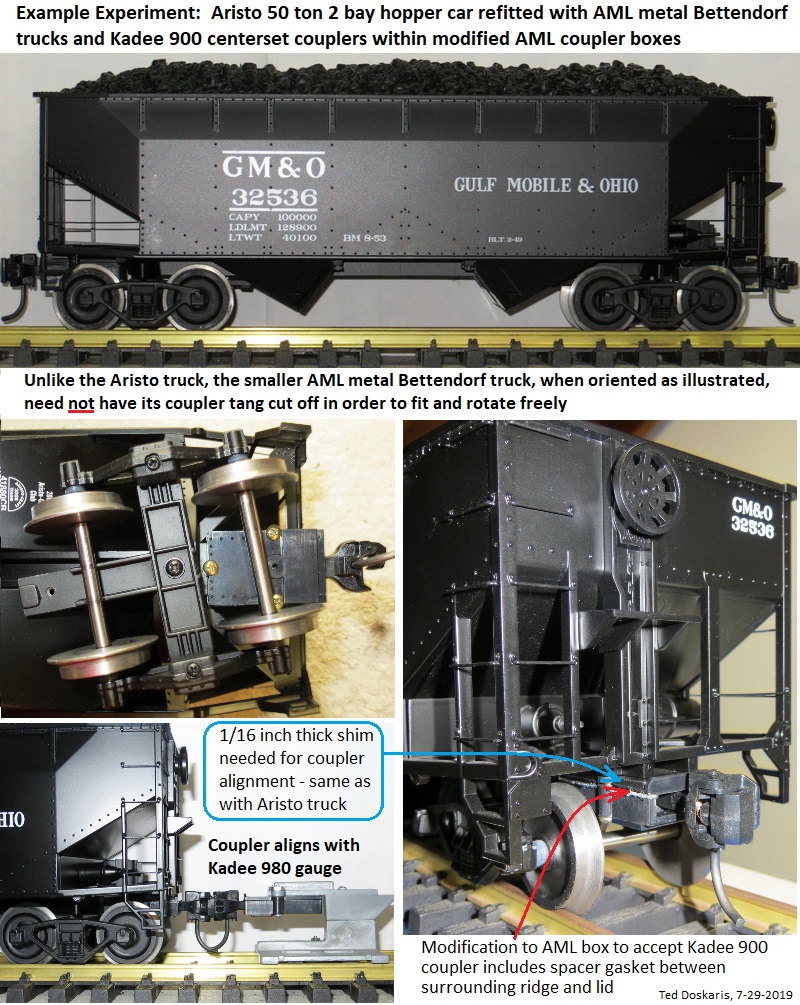 Shown below is the Weight of the Aristo 50 ton 2 bay hopper car with AML coupler boxes and 50 ton trucks. 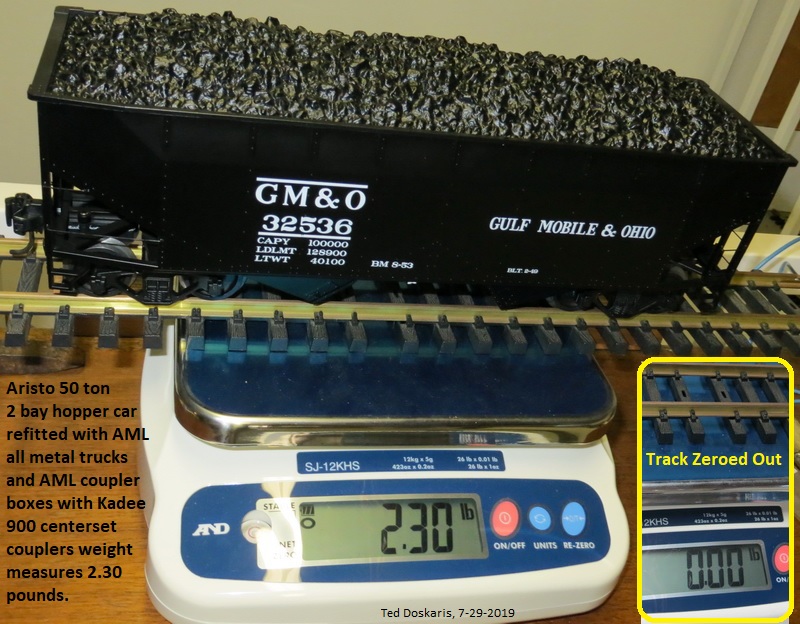