New Stainless Steel wheel and changes to both types of motorblocks

In February 2011, we found that the long promised Aristocraft stainless steel wheels were finally in stock.

There are 2 part numbers:

These were supposed to be replacement wheels for the 2 axle motor blocks and the 3 axle ones (note that the 2 axle blocks on the GP-40 is of the "3 axle" type.

I ordered enough "wheels" for my 3 E8s and my 2 RDCs and my RS-3. I was very surprised at the size of the boxes and the weight, but the numbers and descriptions were right on the boxes. (6 sets of 6 wheels for the prime movers, and 6 sets of 4 wheels for the older 2 axle motor blocks).

Opening the boxes continued the quandry: 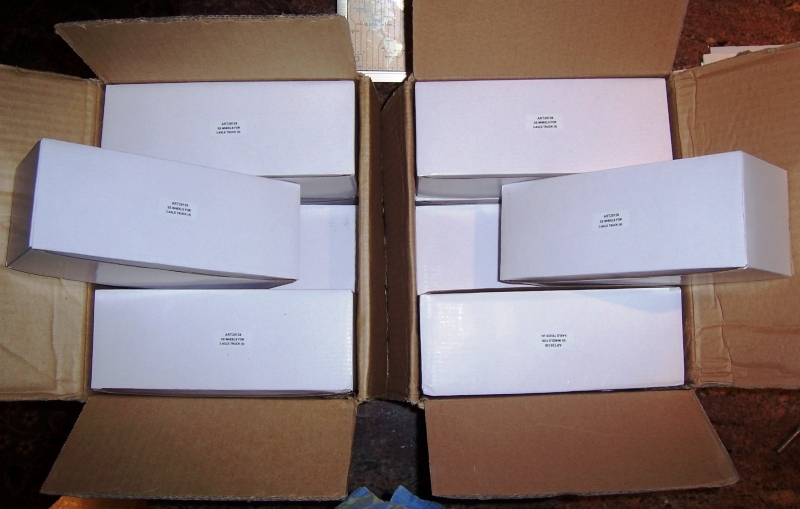 Those boxes are still are WAY too big! 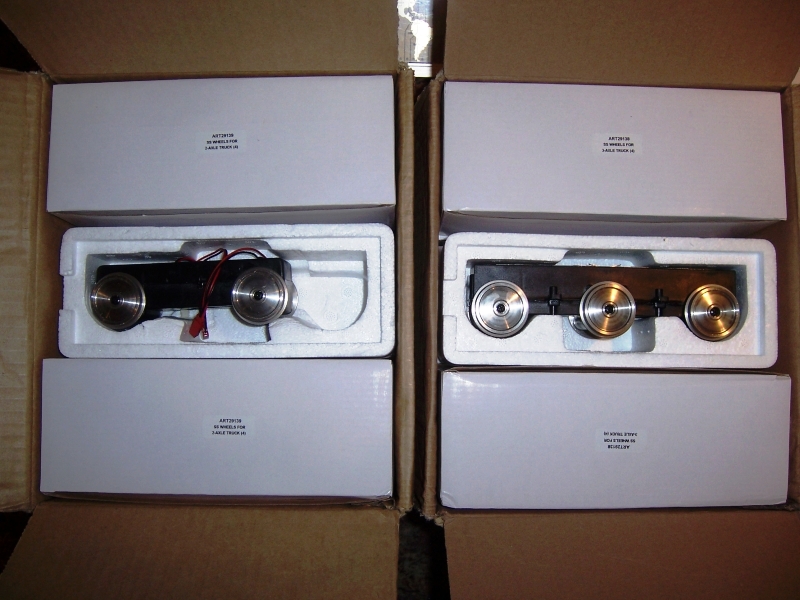 Wow, so you get "free" motor blocks. The price for the "wheels"  was what was expected. Aristo has indicated they know about this, and they "found a way" to make the motor block cheaper. Very surprising, after making them for about 10 years, they find a way to effectively make them for free?

Something still did not make sense. My initial guess was that China screwed up and made entire assemblies instead of just the wheels. (I love to theorize!) If they had charged Aristo, then Aristo would have known the higher price (for wheels and motor blocks over just wheels) before the product shipped.

So here are the blocks: 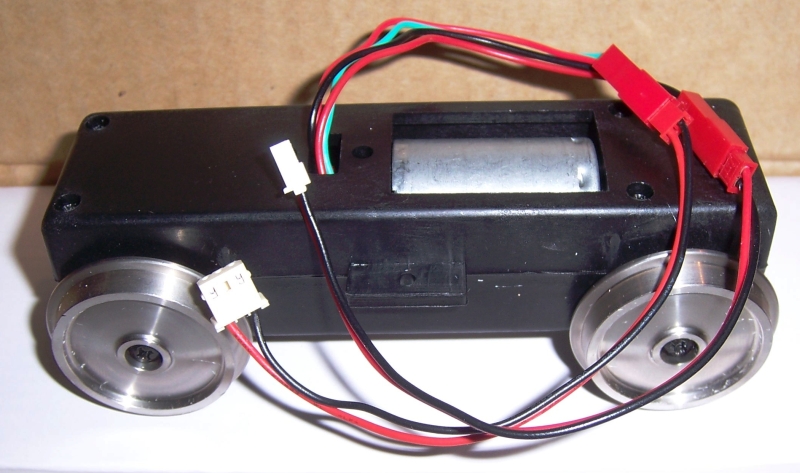 Note in the picture above, the 2 axle block is supplied with the old style connectors, and "adapter cables" to the new style connectors. Thus, electrically, these blocks will work for all "generations" of 2 axle types.

Well, I figure I got a good deal, so what the heck.

I've had issues with Aristo wheels since the plating normally wears quickly, and the base material is steel. In my environment, once the plating is gone, I get surface rust quickly, and if I have not run the loco in a day or two, I have to take a wire brush to the to the wheels before running.

WHAT? The taper of the hub and the "hole" in the wheel is DIFFERENT!

Hmm, I checked the SS wheels between the new 2 axle and the new 3 axle, AHH! they are the same. OK says me, that sort of makes sense, but now people HAVE to swap the motor blocks ALSO. Well, if the price holds, it's fine, i.e. since the motor blocks are "free" then upgrading ALL wheels to SS is the same cost.

Now on to the 3 axle blocks. My E8s are running fine, and have Ted's SS wheels on them, so I decided to just swap the wheels rather than put on the new motor blocks, especially since I have reports from a friend that the arrangement of the "free" and "swivelling" axles is completely different on the new blocks.

OH NO! The new wheels do not fit the old motor blocks and vice versa. Seems the axle taper is the same, but the length of the axles and depth of the "bore hole" in the wheel is different. Way different, gauge off by 1/8" or so!

OK so mystery of why you got the motor blocks "thrown in" with the wheels is solved. No interchangeabilty! Unbelievable! So, if we believe things won't change price wise, then you can buy your SS wheels for between $6 and $7 each, and you get the new motor block, but swapping wheels and/or using your old motor blocks is impossible.

Seems completely nuts. Why not make the new wheels, at least on the 3 axle trucks the same "fit"?

Proceeding, I got yet another unwanted surprise: the 3 axle truck (prime mover) has a long term proven arrangement of one "fixed" axle, and 2 axles that can swivel (around the long axis of the motor block).

This new block has both end axles rigid, and the center one somewhat floppy. I cannot see right now how this is an improvement or will not cause problems. The theory is the rigid axle kept the loco upright and the other 2 axles were able to pivot to follow the track. With the new motor blocks you have basically a long wheelbase truck that is fixed and cannot conform to irregular track. Does not make sense.

I finally called Aristo and spoke to upper management, this was not requested. It is a mistake.

After getting everything fitted, I have a big concern: the new wheels have very small flanges by Aristo standards, even smaller than the ones Ted developed that made me improve my trackwork. See the information below.

There is evidence of red loctite on the last few threads on the screws, none on the axles themselves.

I measured 1.561 back to back on SS Aristo wheels on the 3 axle demonstrator motor block at the Ontario show, 2010

On the test wheels developed by Ted Doskaris and myself:

Back to back spacing was OK in most cases, the 2 axle blocks were close to minimum back to back, and one was way too tight, the 3 axle ones all slightly slightly undergauge

I see 3 problems as delivered:

1. Lack of interchangability with earlier blocks and wheels, the new wheels ONLY fit the new 2 axle and 3 axle blocks. I believe there is no solution for this.

2. Axles do not swivel properly. There is a fix for this, seems the "clips" on the gearboxes are misshapen. See below.

3. Flanges just too small for a rigid frame motor block. The only solution is to turn the wheels down to "grow" the flanges.

What can be done to mitigate the lack of interchangeablity:

Basically nothing. As long as the price holds, you get the motor blocks free. This is fine in the case of the 2 axle blocks, but the 3 axle blocks as received must be worked on, see next section.

What can be done to fix the lack of "swivel" on gearboxes:

The motor blocks need to be assembled properly as they have been for years. The basic theory is one axle is rigid (keeping the loco upright, no kidding), and 2 other axles are very "floppy".

Considering the locomotive and both trucks: most people prefer the outer 4 axles (2 at each end)  need to be very floppy, and the innermost two axles (those two closest to the fuel tank)  to be rigid. Aristo often does this differently, where the outer 2 axles (1 at each end) are rigid, and the rest floppy. Either way works.

R.J. DeBerg was the first person to figure out what was wrong. Basically misshapen clips on the motor blocks restricted the motion of the gearboxes. 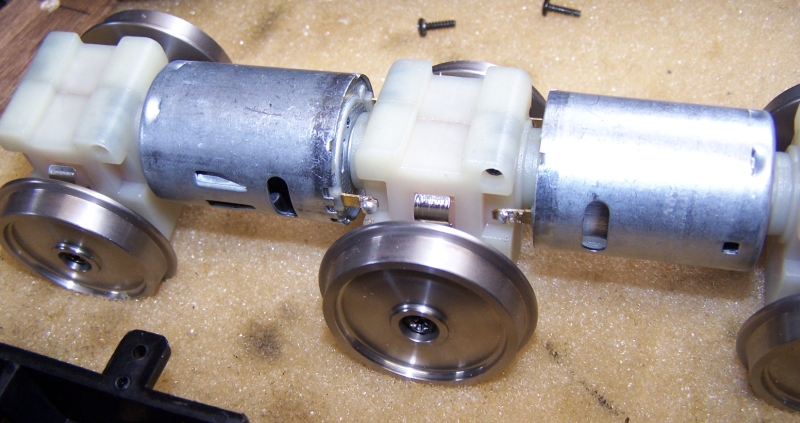 In the picture above, you see the metal "clips" that bear against the contacts in the motor block to transmit power from the rails. Looking at the center gearbox, you can see a small recess behind the clip. This is where the end of the clip "tucks into" so as the gearbox is inserted in the motor block, the clip can retract into the recess.

The tips of these clips need to be re-formed to fit where they belong.

On the other side of the gearbox, the other end of the clip is also misshapen: 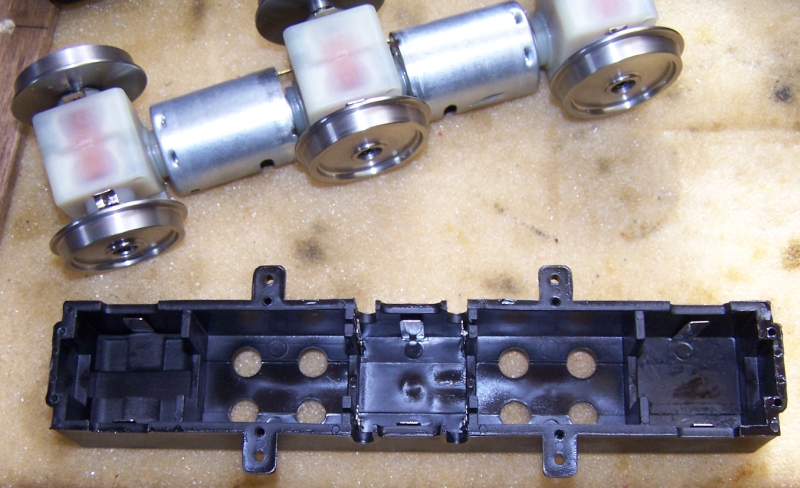 Removal and reforming of these clips appears to restore the proper flexibility of the gearboxes.

Note, there were rubber strips in BOTH ends of the gearbox as delivered, you need to remove the strips from one end, as the picture above shows.

Also, the motors are supposed to be soldered in place, see the blobs of solder on the motor brush leads above. In many cases, the soldering is

I'm concerned about the flange depth being too little for most layouts. I know that the 0.1" flanges we made were problematic on the Aristo motor blocks.

I do see that these flanges meet the G1MRA standard. This is an admirable goal, but most locomotives that can use these flanges have sprung drivers, and many are a shorter wheelbase than the Aristo 3 axle motor block. The Aristo block does not have a suspension, while the gearboxes can "swivel" they cannot absorb humps and dips without putting an axle "in the air", which means the flanges are the only things keeping the axles aligned to the rails

I'm continuing investigation, and am in contact with Aristo, but I must advise caution, that anyone going from standard Aristo flanges to these new flanges will almost certainly encounter areas of trackwork that will need improvement. Do not expect these wheels to run "bettter".